The Gujarat Power Corporation Limited is planning to establish a thermal power plant, construct a colony, have an area for ash dumping and mine for lignite on the 3,000-plus acres of land in Bhavnagar. 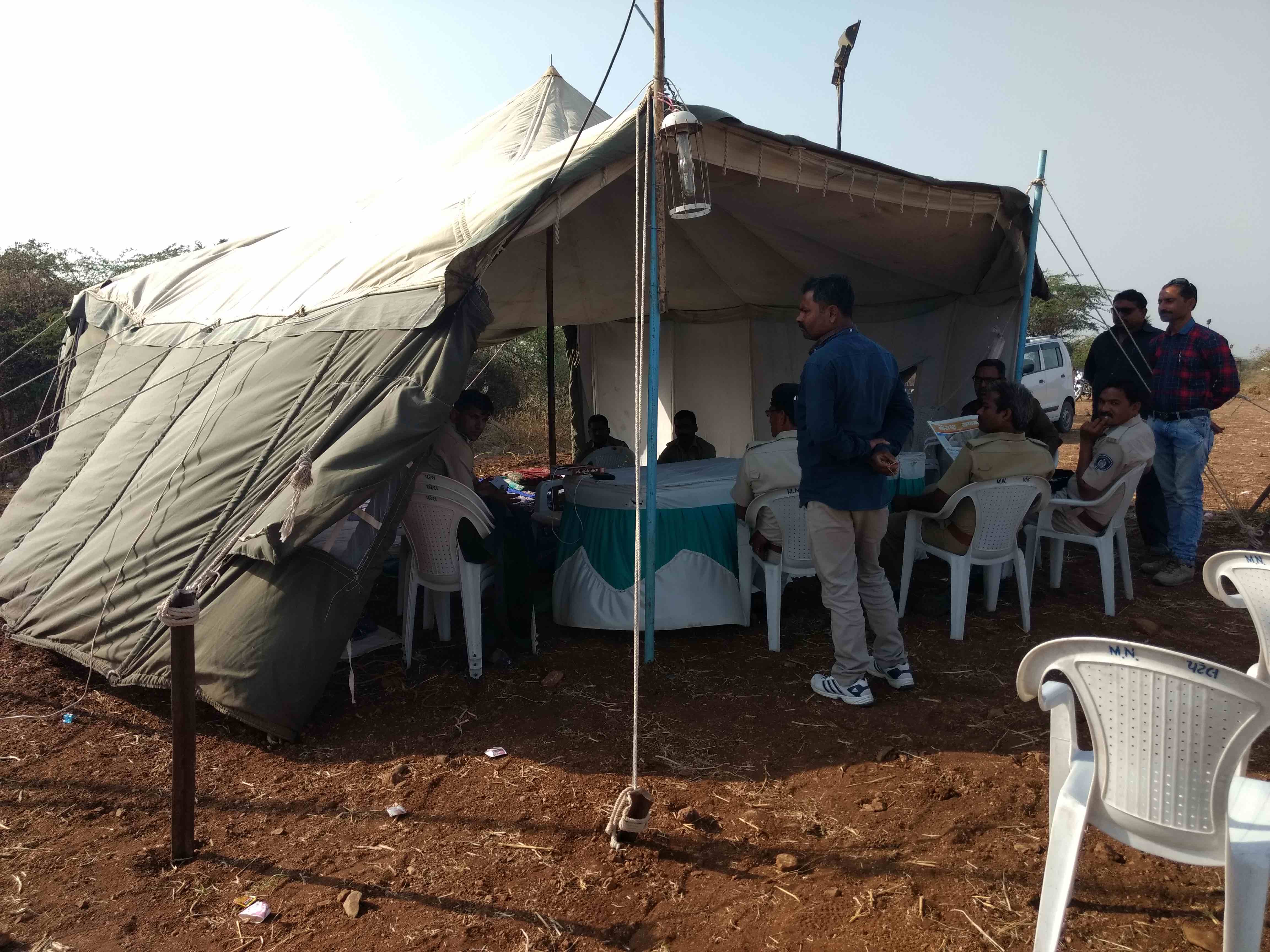 Bhavnagar (Gujarat): On a plot of agricultural land, it is unusual to see a police tent with about six-seven personnel camping in it. However, as you go past agriculture fields en route to Badi, a nondescript village in Gogha taluka, Bhavnagar district in the Saurashtra region of Gujarat, that sight jumps at you.

Villagers from Badi and another 11 villages around it had never really encountered the police – until they decided to protest and fight a case in the high court against the physical possession of land by the Gujarat Power Corporation Limited (GPCL) in December last year.

On February 15, one day before the Gujarat high court was to hear the case, villagers claim that about 1,200 police personnel swarmed into the 12 villages. Roads between the villages were blocked. Reportedly, there was one deputy superintendent of police (DySp), ten inspectors, 15 sub-inspectors, 70 policewomen and 15 personnel from the mounted police division present. 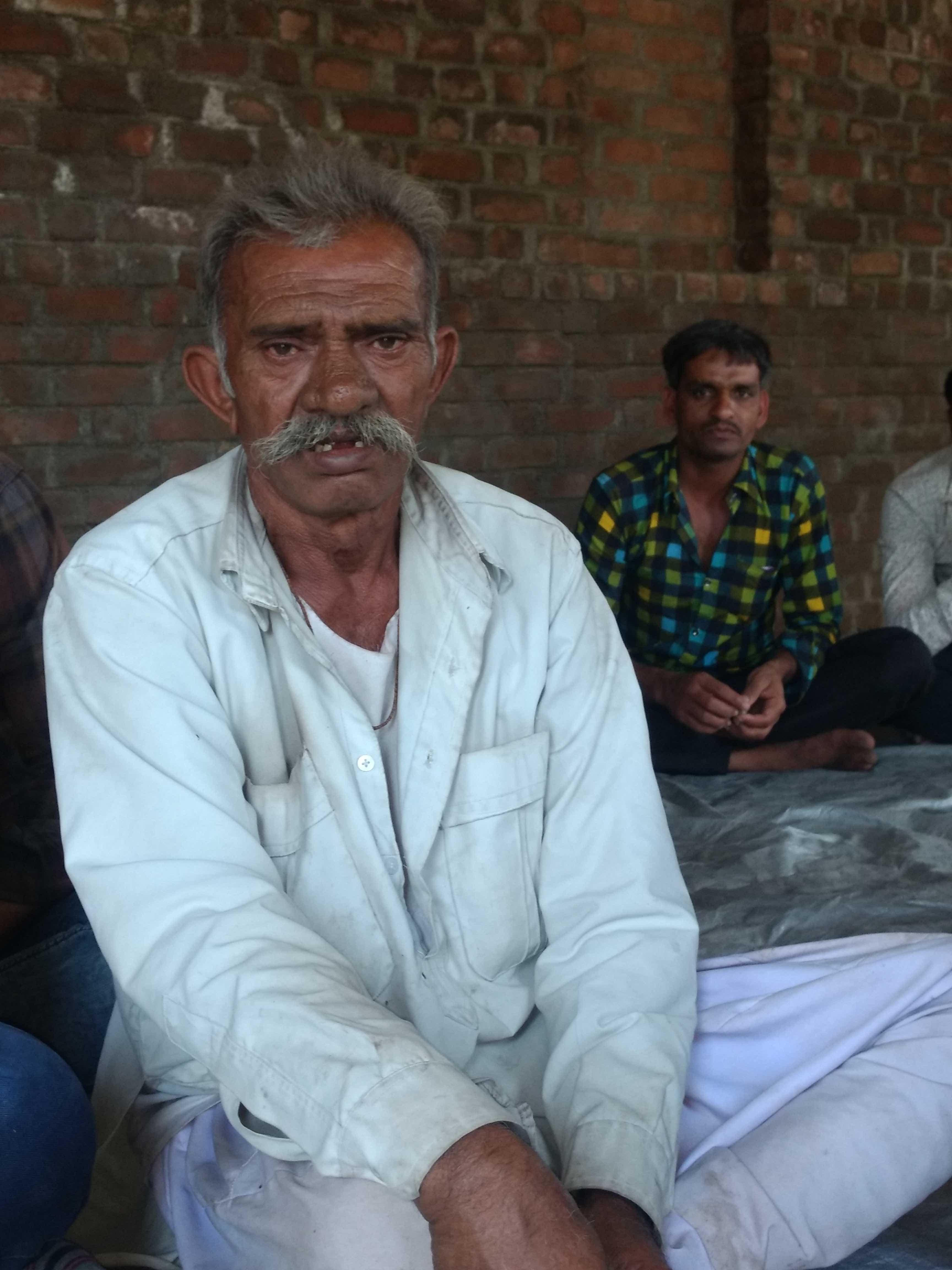 Laxmanbhai, who remembers how the land was acquired 21 years ago. Credit: Damayantee Dhar

“The villagers asked for protection so we are here,” said sub-inspector Makwana, who claimed to be in charge of the tent where the police personnel are camping.

However, P.L. Mal, superintendent of police, Bhavnagar, said: “The police have been camping on one of the plots of land in the village as GPCL has asked for protection.”

Between the years 1993 and 1994, 3,377 acres of land from the 12 villages of Gogha taluka, Bhavnagar – including farm land, grazing land and wasteland – was acquired by the government. The plan was to establish a thermal power plant, construct a colony, have an area for ash dumping and mine for lignite.

In 1997, consent was taken from the villagers in the area. However, no attempts were made to take possession of the land until December last year. Reportedly, the fact that the thermal power plant in the area was commissioned in 2017, and not 2000 as originally planned, initiated the process of taking possession.

Lignite mined from the land will then be used as a raw material in the thermal power plant.

“Let me tell you, first we did not want to give away our land at all. Our land is our only means of livelihood. How do we feed our family if we give away our land?” said Laxmanbhai Hirabhai, a resident of Surkha village.

“The villagers were offered Rs 48,000 per hectare (for non-irrigated land), and we had to accept. The then collector told us that if we did not accept what was being offered, we will get nothing,” according to 65-year-old Hirabhai. “To add to that, residents of Surkha village have been paid at the rate of Rs 12,500 per hectare until now. We are still waiting for the government to give us the rest of the compensation.”

“In 1993-94, the government of Gujarat issued a notification under Section 4 of the Land Acquisition Act, 1894 declaring its intention to acquire the land. Within a period of one year, in 1994-95 the government issued a notification under Section 6 of the Act, after which the concerned owner cannot sell the land to any other party,” stated advocate Anand Yagnik, who is representing the farmers in the high court.

“The consent accord was passed in the year 1997, based on an agreement signed by the villagers, a representative from GPCL and a special land acquisition officer. Thereafter, notional or paper possession was taken over the land of the farmers en masse in the office of the accountant in village Badi. The money was distributed on different dates within a week or so,” added Yagnik.

“Whenever the government wants to establish an industrial estate under the Gujarat Industrial Development Corporation (GIDC), the land is bought at the rate of Rs 46 lakh per acre. The GIDC set in Sanand while establishing the Tata Nano plant is a recent example where land was bought at the rate of Rs 46 lakh per acre (one hectare is 2.5 acre). In this case, the government paid only Rs 48,000 per hectare. Noticeably, in its tender inviting contracts for mining during the bidding process, the government had declared that the lignite beneath the acquired land is worth Rs 19,500 crore. Meanwhile, the government, which initially had quoted a price as low as Rs 10,000-20,000 per hectare, later ended up paying only Rs 46 crore in total to the farmers as compensation. Moreover, the new land acquisition Act 2013 is in place. The petition states that under section 24(2) of the Act, in a scenario wherein consent awards were passed five years prior to the commencement of the Act of 2013 and if compensation hasn’t been paid or physical possession has not been taken, the acquisition lapses and land is to be returned to the landowners,” he added.

Unlike the usually arid Saurashtra region, farmers in these 12 villages have always had access to fertile land, which can be used for three crops a year, owing to the Setruji and Kareda canals and Maleshwari river that flow through the area.

“We don’t want to sell our land at all. Farming has been our only occupation for generations. This is a very fertile three-crop land. We grow cotton and groundnut in the monsoon, wheat, onion, groundnut, cumin and vegetables in the winter and jowar, groundnut and vegetables in summer,” Pravinsinh Gohil of Khadsalia village told The Wire. 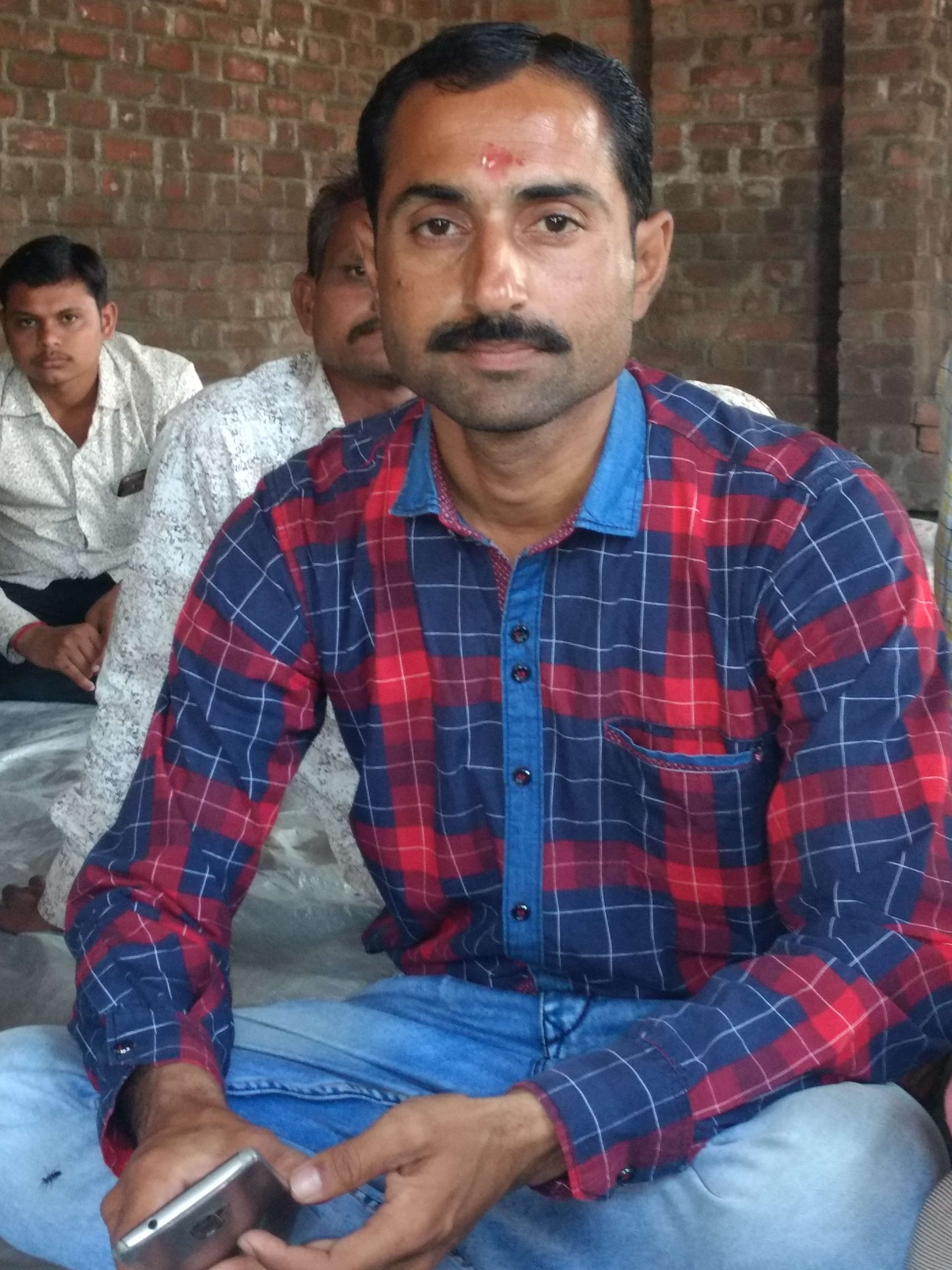 “Our elders are uneducated, most of them reluctantly gave away the land under pressure or without understanding what it meant,” according to Narendrasinh of Badi village. “In December last year, we decided to get together and fight this both legally and through protests. But our lives have been difficult since the day we decided to resist this land grab.”

“On December 20 last year, the collector of Bhavnagar, contractors and officials representing GPCL, and about 100 police personnel came to Badi to proceed with the physical possession of the land,” said Vasudevsinh Gohil, a resident of Badi village.

Subsequently, on December 23, the villagers staged a massive protest, with about 5,000-7,000 villagers sitting on a dharna at Surkha village, along the road connecting the 12 villages. On the same day, the state administration promised a meeting between villagers and representatives of the GPCL, while asking villagers to not stage any protest in next 45 days.

Meanwhile, the Bhavnagar police filed two FIRs against ten farmers in Gogha police station and Vartej police station, accusing them of inciting villagers for their benefit and creating an obstacle in police work. Of the ten farmers, three farmers were named in both FIRs.

“We were informed two days later. But we managed to get bail and weren’t arrested,” said Narendrasinh, who was named in both FIRs.

On January 30 this year, Lakdhirsinh Gohil, one of the protesting farmers of Badi village, got a call from the collector’s office. Following that, 30-35 villagers went to visit the collector.

“Along with the collector, SP and DySP of Bhavnagar, two police sub-inspectors and a contractor representing GPCL were present in the room,” said Narendrasinh. 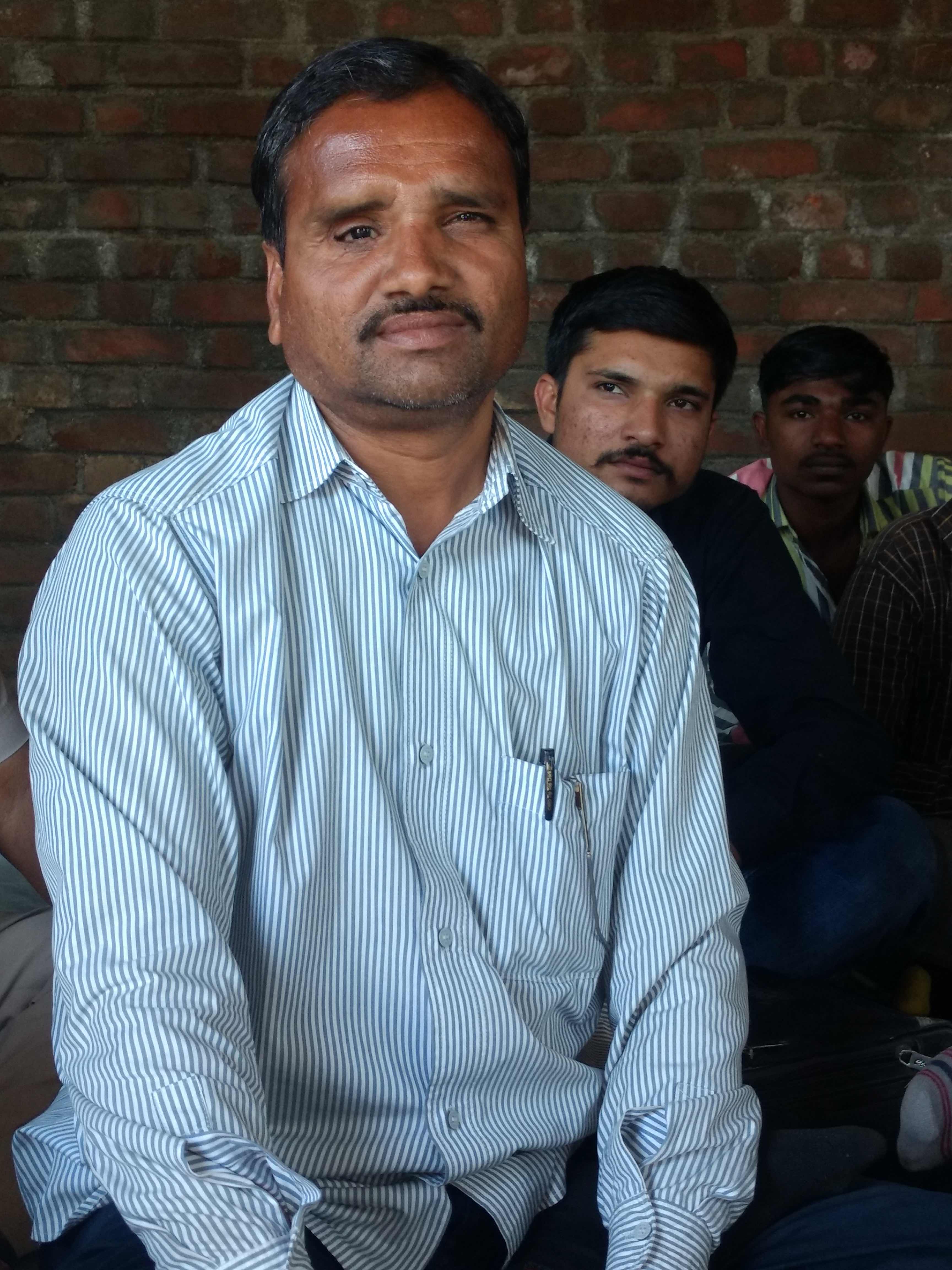 “The SP and collector threatened us. We were told to not protest in the future, or else FIRs with far more serious offences would be slapped on us,” Pravinsinh Gohil told The Wire.

“The land had been acquired years ago and the government is the rightful owner of the land. Everyone knows that. Now, when the time has come to implement the project, people with vested interest are interrupting,” stated Harshad Patel, the collector of Bhavnagar. “I can’t comment on when the process will begin as the matter is in court now.”

“Most of us had never seen a police station before. On February 13 and 14, about 10-12 police vehicles did rounds of the 12 villages. On February 15 there were about 1,000-1,200 police personnel in the village. Our men have FIRs against them. We are farmers, this is scary for us. Our women are scared to go to field to farm and our children are afraid to go to school,” said Kanaksinh, another protesting farmer.

“I am scared. We (the women) are scared for our men. If the police harm them, what will we do?” asks Chantuben Dulabai, a resident of Surkha.

“But we will keep fighting for our land. What option do we have, anyway?”