Ground Report: Farmers at Ghazipur Border Mark Year of Protest, Vow to Keep the Fight On

Notwithstanding the fact that the government has announced its intention to repeal three contentious farm laws, farmers have vowed to continue their agitation until "all" of their demands are met. 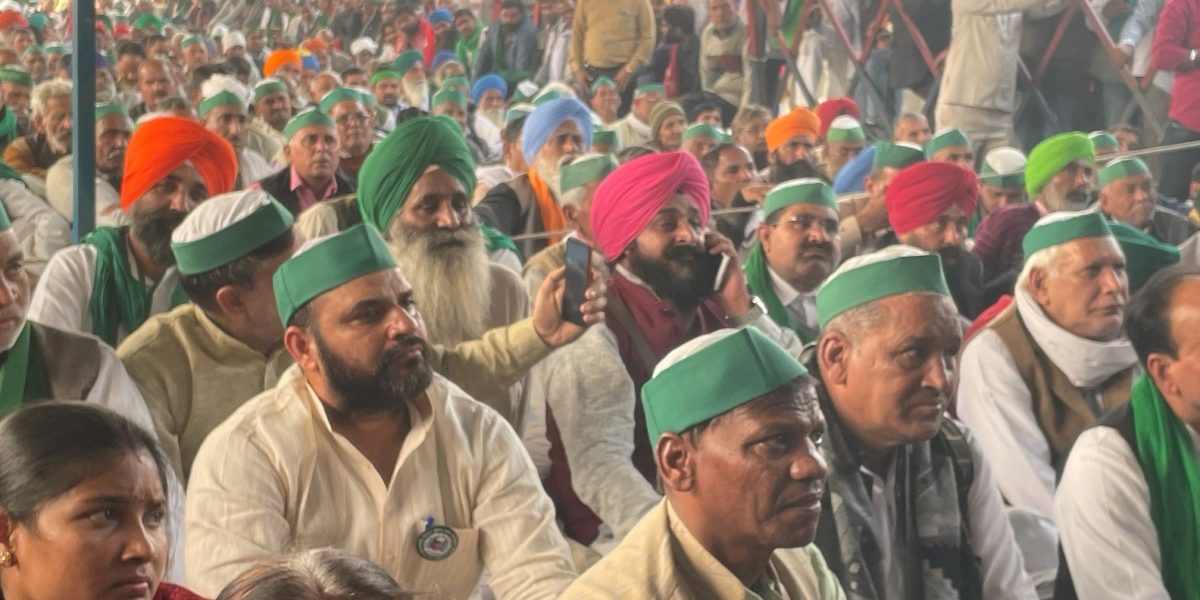 Farmers at Ghazipur border during a meeting on Friday, November 26, to mark one year of their movement against three central farm laws. Photo: Indra Shekar Singh.

Ghazipur (New Delhi): The morning smog hadn’t cleared yet. The sun was still behind a greyish blanket of clouds. However, the Ghazipur border was already buzzing with activity. There was a heavy police presence too. Men and women, young and old had already begun preparing to celebrate their success and to mark one year of their protest on Friday, November 26.

Notwithstanding the fact that the government had announced its intention to repeal three contentious farm laws, the farmers have vowed to continue their agitation until “all” of their demands are met. 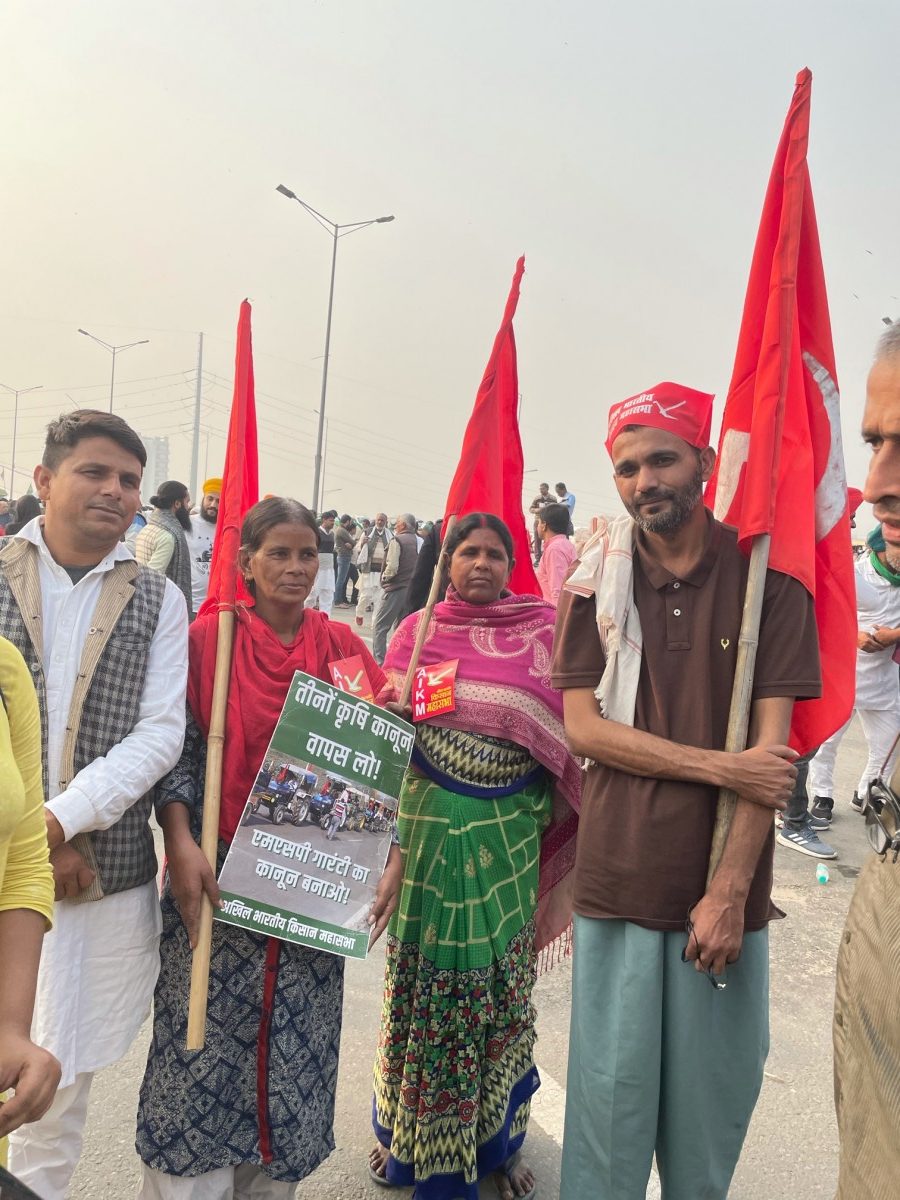 Farmers at Ghazipur border, Delhi, during a meeting organised to mark one year of farmers protest on November 26. Photo: Indra Shekar Singh.

At first sight, the camps were beaming with energy, as hundreds of people with red caps and green gamchas were seen sloganeering “MSP is our right”, “Modi give us MSP”, among other slogans. In a week’s time, new slogans had been put together. However, the constant honking in the background drowned out sloganeering a bit. In an hour, over a hundred cars and tractors passed by on the adjacent road.

A number of new faces surfaced at the tents. Farmers representing Left allied groups, factions that broke away from BKU (Bharatiya Kisan Union), Jai Kisan Andolan, among others showed up. A few posters of farmers’ leader Gurnam Singh Chaduni came up too. On the one side, women were seen making rotis on chullahs while langars served food freshly made food to a gathering of people. A little away from this gathering were a few Sikh young men bathing in the sun.

When asked what was hustle bustle about, 25-year-old Balkirat Singh responded with a smile and said, “Don’t you know farmers have won. Laws are repealed and now there is a celebration organised here. We are getting ready.”

As this reporter continued to stroll past the tents, vivid images of year-long protest of farmers, who braved all odds, came back rushing to his mind. An hour later, he walked into Rakesh Tikait’s tent only to find it vacant. Tikait wasn’t there. However, there were a few senior journalists, BKU representatives, and the air was filled with hope, and more so with a feeling of satisfaction of having achieved a victory.

Also read: The Anatomy of a Successful Protest, or How the Farmers Won Their Fight

“It’s only a matter of days before our demands are met,” said Naresh Phehalwan, a 52-year-old BKU member from Shamli, Uttar Pradesh. He jokingly added, “If Modi listens… after Monday our tractors can carry all the tents too.” He was apparently referring to the march which the farmers had planned to take out at the start of the Winter Session of parliament. Whether or not will this prediction come true, only time will tell.

It was already around 1:30 pm, a meeting, marking the victory, had already begun at the main stage. As he was on his way to the main stage, this reporter spotted a few farmers from Allahabad. Among them was the general secretary of All-India Kisan Mazdoor Sabha (AIKMS) Dr. Ashish Mittal.

“Today, we have become a new agro-political force and the world is watching us. There are people of all ideologies here, but we are all united under one banner. This is a new political phenomenon,” said Mittal, his voice exuding confidence.

“In all the rallies, about 70% of the tractors and people come on their own, without our support. This is a real people’s revolution,” he added.

A little away there were a group of 30 farmers from Tamil Nadu. Among them was Eesun Murugasamy, founder of Tamilnadu Farmers Protection Association, who had been part of Tikait’s Tamil Nadu campaign earlier this year and had traveled from Tiruppur in Tamil Nadu to the Ghazipur border in Delhi.

“Since the last rally, support has really grown in Tamil Nadu. Today all towns and villages are celebrating the anniversary, and honouring 750 martyrs,” said Murugasamy.

All of a sudden, there was commotion as a Punjabi song and an announcement blared from the speakers. “We welcome Rakesh Tikait to speak,” said the announcer. As Tikait took the microphone to address, the whole arena with around 3,000 people turned silent. Crews from media sat down focusing their cameras on the speaker. 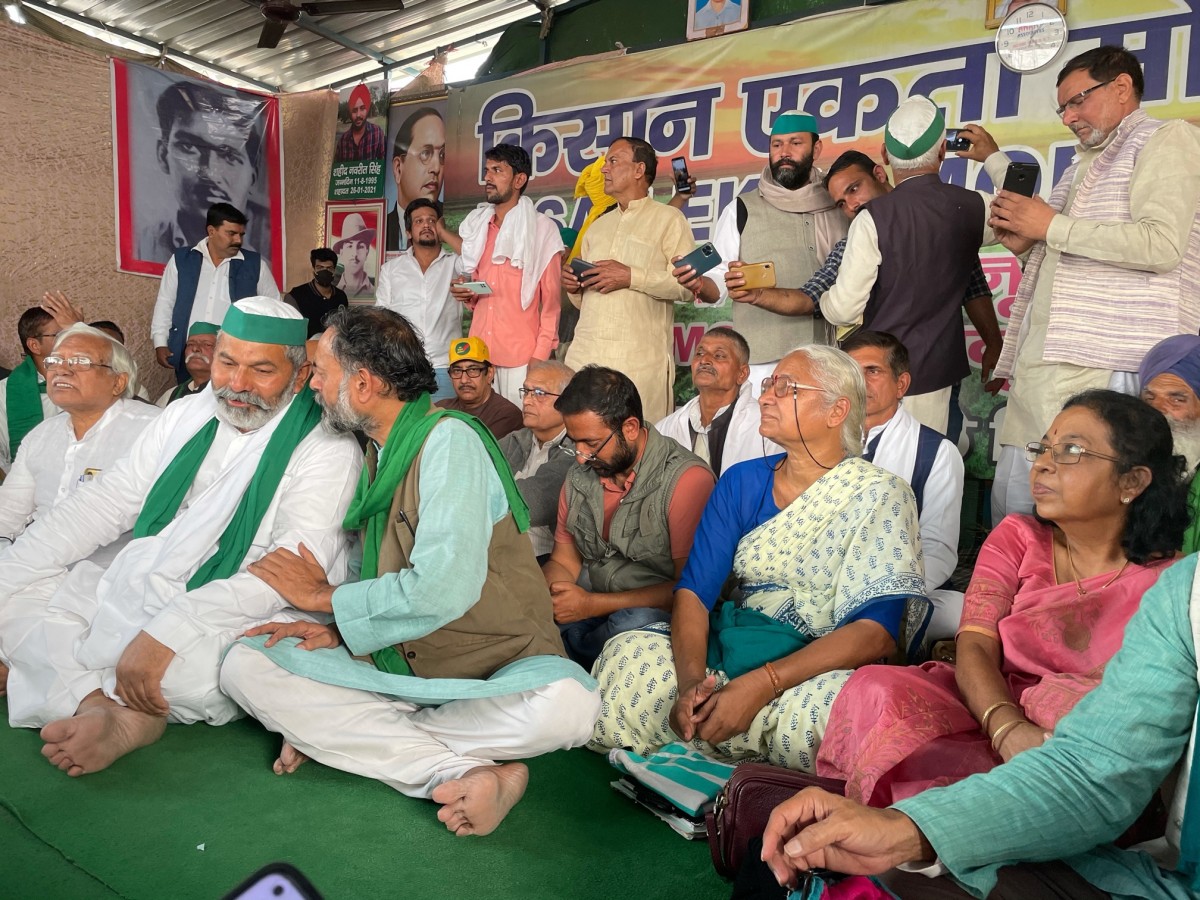 “Today there’s strict control on the camera and pen. The media (corporate) asks only one question: when are the farmers leaving? People have to be alert and answer,” began Tikait.

“The three black laws and Corona are one disease. They came together as a disease and farmers and our country fought valiantly and defeated them. But the laws were a very deadly disease because of which our farmers are pushed back a year and a half,” said Tikait as the crowd received his observations with applause.

Citing poor health and a train to catch, Tikait wrapped up his speech in seven minutes. Nonetheless, he covered a whole host of issues ranging from MSP, banking sector and farmers, fertilisers, National Green Tribunal order on agricultural equipment and air pollution in his terse characteristic Western Uttar Pradesh style. The crowd was elated. The microphone was handed over to Medha Patkar and eventually to Yogendra Yadav.

Maintaining the celebratory mood and reminiscing on the year-long protest, Yadav said, “This is the time to celebrate victory. Remember, our farmers reached Delhi on Constitution Day to ask for their rights. But the ruling party showed their divisive politics instead: Jat versus non-Jat in Haryana, Hindu versus Muslims in UP. However, we remained united as one, as farmers.”

Yadav comments equally elicited a loud cheer from the gathering.

When it was farmers’ leader B.P. Singh turn to speak, he told the gathering not to become complacent in their fight, after the repeal of farm laws.

“Don’t be fooled by the repeal. The international cartel that rides on Modi’s back will come back. We have to get corporate cartels out of agriculture.” Singh echoed the sentiments of many farmers’ unions. “Despite the repeal, the corporate hijack of Indian agriculture has not been derailed. Treaties like the WTO seek to destroy our PDS and MSP. We must resist them too,” he concluded.

After about 40 speakers addressed the gathering, the crowd began to thin. As this reporter was leaving, he ran into Medha Patkar. When asked what she thought of the farmers’ movement so far, she said, “This victory is good, but the corporate tyranny remains alive. The government has backed now, but the corporation of Indian agriculture is not completely stopped. Look at Punjab, there is serious water and health crisis, along with mounting debt.”

On being asked who can avert such crises, she said, “We need to move towards self-reliance and ecological methods of farming. Indian farmers need to adopt traditional methods, decrease input costs and save water too.”

The sun had turned bright orange and in the distance, a group of kites overhead was seen in search of food. The 365th day of farmers’ unprecedented movement thus concluded on a determined note to keep the agitation on until all their demands are met.