The wholesale prices of garlic have crashed to as low as Re 1 per kg, and farmers argue that the Bhavantar scheme deserves a share of the blame. 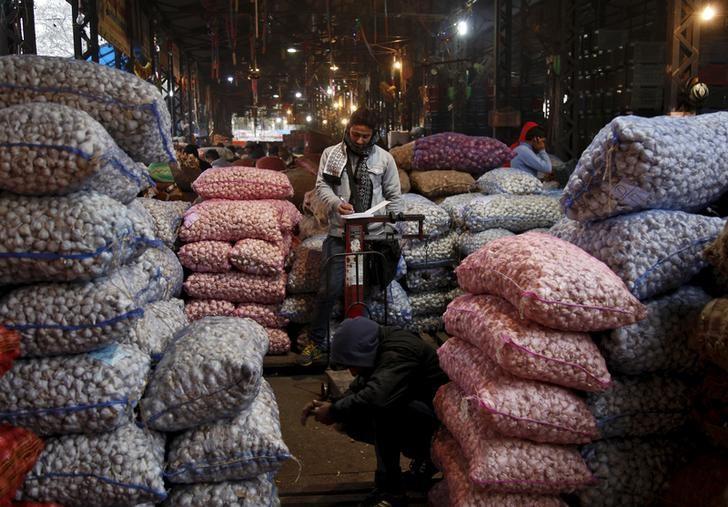 New Delhi: A year after the agitation in which five farmers died in police firing, farmers in Madhya Pradesh’s Mandsaur are protesting once again. Farmers claim that garlic in the wholesale market is selling at as low as Re 1 per kg. The problem, resulting from a bumper garlic crop this season, is spread across the Malwa region in Madhya Pradesh and Rajasthan, which produces about 45% of India’s garlic.

Farmers have claimed that prices in the wholesale market have dropped from around Rs 20 per kg earlier in the season to Re 1 per kg. “Last month, I sold at Rs 2,000 per quintal and last week at Rs 100 per quintal,” said Ramayan Singh, a garlic farmer in Mandsaur district.

A look at the average prices of garlic in a Mandsaur mandi does show a dip in the wholesale price of garlic. From Rs 1,804 a quintal in January, average prices have fallen to Rs 779 per quintal for the first ten days of May. 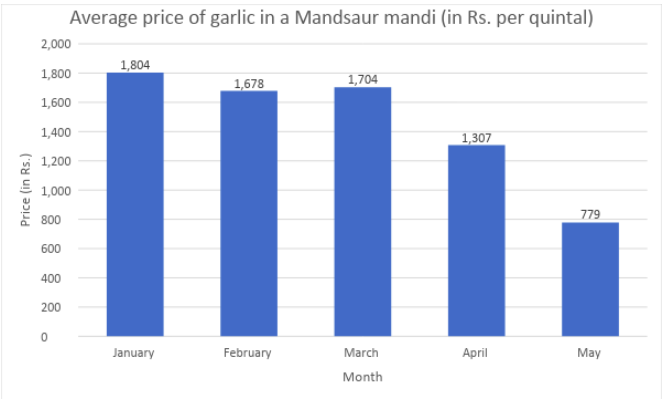 Prices in the last week have been as low as Rs 200 per quintal in some government operated mandis, as per the data provided by government-operated Agmarknet. “The situation is even worse in the markets that operate privately,” said Singh.

Last year, farmers in Madhya Pradesh had faced a similar situation with their onion crop when the wholesale market price crashed to Re 1 per kg. Consequently, farmers switched to sowing garlic in the hope of getting higher prices for their produce. However, due to the switch, the area under garlic cultivation increased from 92,000 hectare in 2016-17 to 1.28 lakh hectare in 2017-18, which led to the excess produce.

“When we were not getting a good price for onion and had to throw it away, we decided to switch to garlic because garlic generally pays well. But it has proven to be a disaster this time. Forget about recovering costs, we are not even getting enough money to be able to pay for transport from the farm to the mandi,” Singh said.

The problem of low wholesale prices for garlic had begun emerging in March. Recognising this, the government of Madhya Pradesh decided to include garlic in its flagship Bhavantar Bhugtan Yojana, under which the government pays the difference between the minimum support price (MSP) and the price fetched by the farmer in the mandi, in theory.

However, on closer inspection, the scheme doesn’t exactly work on that principle. When the MP government announced that garlic will be included under Bhavantar, it also announced a set of conditions. It announced an MSP of Rs 3,200 per quintal for garlic, but a farmer selling at less than Rs 1,600 per quintal in the mandi would not be eligible to benefit from the scheme. Even if the above condition was met, the maximum that the government would pay farmers was set at Rs 800 per quintal.

Data provided by the government show that the average wholesale price of garlic has been lower than Rs 1,600 per quintal in the months of April and May. This means that farmers, on average, could not benefit from the Bhavantar scheme due to the fine print.

The Bhavantar scheme with respect to garlic, like with other crops, also suffers an unintended consequence due to the nature of the scheme itself. Traders in mandis, who operate as cartels, depress the price artificially due to the existence of Bhavantar. “Traders lower the price of crops under Bhavantar and tell farmers to take the rest of the money from the government. The farmers are in any case helpless in front of traders,” said Shiv Kumar Sharma, president of the Rashtriya Kisan Mahasangh, a coalition of over 100 farmers’ organisations from across the country which emerged after the Mandsaur agitation last year.

Farmers argue that they were better off without Bhavantar and the price of garlic crashed, in part, due to its inclusion in the scheme. “Before Bhavantar, garlic was selling between Rs 3,000 and Rs 3,500 per quintal. But after garlic was included in Bhavantar, prices started dropping and have now crashed. It provides the traders an excuse to lower prices,” said Mohan Sharma, a farmer in Mandsaur.

Shiv Kumar Sharma is demanding that the government purchase garlic from farmers at the minimum price set under the Bhavantar scheme – Rs 3,200 per quintal. “There is no other option left. The government will have to procure directly from farmers. Farmers are not getting any price in the mandis,” he said.

The Rashtriya Kisan Mahasangh is planning another stir from June 1 to June 10, in which it plans to stop supply of farm products such as milk, vegetable and grains to cities across the country. The stir is planned with broader demands such as implementation of the Swaminathan Commission recommendations and loan waivers.

But according to Sharma, the stir will be particularly strong in the Mandsaur region due to the fate faced by garlic growers. “Our agitation is based on broader demands, not just garlic. But given how the situation has unfolded, we have included an MSP for garlic as one of our demands and we are expecting farmers in the Mandsaur region to participate aggressively in the stir,” he said.