Futures and Derivatives: Can Farmer Producer Organisations Take Some of the Risk out of Farming?

Now that the government has enacted three farm laws with the objective of free trade in agricultural commodities, it would be of interest to watch the developments in the next year.

A farm worker harvests maize crop in a field on the outskirts of Ahmedabad, India, February 1, 2019. Soybean and maize are two commodities for which FPOs have used the futures market the most. Photo: Reuters/Amit Dave

One of the more important arguments in favour of free agricultural markets, but one that has not been discussed widely in India, is how farmers will be able to participate in commodity derivative exchanges.

When the Atal Bihari Vajpayee government restored the commodity future exchanges in 2003, it was hoped that farmers will take signals from future prices and take cropping decisions based on such signals. However, the Indian government over the years continued to intervene in the futures market whenever there was excessive volatility. On several occasions, trading was suspended or banned. For example, trading in rice, tur and urad remained suspended for more than a decade. In addition, the margins were increased for potato (100% in August 2014), chana (95% in June 2016) and sugar (70% in September 2016).

As a result, trading has remained subdued. According to data available with National Commodity and Derivatives Exchange Limited (NCDEX), from 2016 to February 2021, 320 farmers producer organisation (FPOs) (8.83 lakh members) from 14 states have participated in futures market at NCDEX. Out of them, around 130 FPOs, representing over 3.20 lakh farmers, have used commodities futures market to hedge price risk. More than 50,000 tonnes of different commodities have been hedged by these FPOs. Soybean and maize are two commodities for which FPOs have used the futures market the most and they have delivered about 9,530 tonnes of different commodities.

Though the amounts traded are low compared to production but as we know that futures market acts as an indicator and empowers the FPOs and farmers to have a better negotiating power in the market place. Futures platform brings in transparency in prices and helps in informed decision making.

Now that the government has enacted three farm laws with the objective of free trade in agricultural commodities, it would be of interest to watch the developments in the next year as the global commodity prices are on an upswing and the same is being reflected in Indian commodity futures also. Will FPO participation go up this year?

Let us consider the case of soybean to understand the developments in the Indian futures market in the last year.

Soybean is the largest oilseed crop in India. On June 1, 2020, the government announced the minimum support price (MSP) of soybean at Rs 3,880 per quintal. Due to ample monsoon, the production was estimated to be good and on September 22, 2020, the government released the first advance estimate of production of 135.84 lakh tonne in kharif 2020-21. 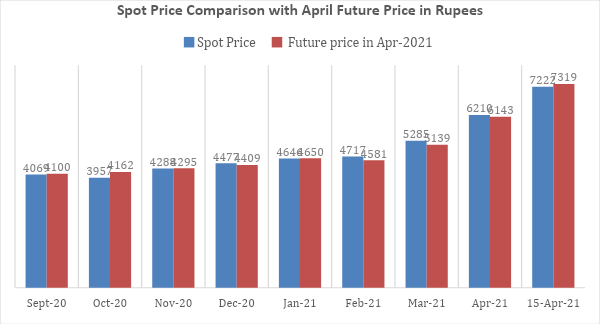 The farmers would have harvested the kharif crop of soybean in late September to October 2020. The April 2021 futures of soybean were not very much different from the spot prices prevailing at that time. So, an average farmer would not have seen any reason to store his crop to realise better prices later in the year. What message can the farmers draw from the above soybean futures case for kharif crop of 2021?

IMD has predicted a normal monsoon so a good soybean crop can be expected. While the MSP for kharif 2021-22 is yet to be declared, the future price for October 2021 at NCDEX is Rs 6,000 per quintal. For ease of understanding, we assume that the MSP of soybean will be increased from Rs 3,880 per quintal to Rs 4,000 per quintal.

Is there a way that farmers or FPOs can realise Rs 6,000 per quintal this year? The farmers are watching that the current spot prices are Rs 6,500-7,000 per quintal.

The option contracts do provide a window of opportunity. An estimate of the premium value based on the current market price, strike price, historical volatility of 29.5% and time to expiry of 184 days is given below. Further, a comparison is also given in case the position is initiated at the time of sowing i.e. on July 01, 2021:

So, even before the crop is sown around June-July, theoretically, a farmer can pay Rs 383 per quintal and purchase ‘put’ option which will assure him a price of Rs 6,000 per quintal when he harvests his crop in October.

If we assume that the price falls to Rs 5,000 per quintal in October, the farmer is assured of realising Rs 6,000 per quintal. If the price is higher than Rs 6,000, the farmer can sell his crop in the open market. The put option plays the role of price risk covered insurance to the farmers/FPOS.

In both the events, the farmer or FPO will incur expenses of ‘put’ option premium of Rs 383 per quintal.

Also read: How India Was Stripped of Its Atmanirbharta in the Edible Oil Industry

Madhya Pradesh produces the largest quantity of soybean in the country. In the previous years, the National Agricultural Cooperative Marketing Federation of India (Nafed) had to procure soybean at MSP under the Centre’s price support scheme (PSS). This year procurement may not be needed due to rising global price, higher export of soymeal and an increase in the retail prices of edible oils.

It is only the large cooperatives or government organisations like Nafed and Food Corporation of India (FCI) at the central level and Markfed and Agro Industries Corporations at the state level that can bring scale to the derivative markets. Even they will have to recruit competent and experienced professionals who have deep knowledge of derivatives markets. Due to their skillset and size, large organisations controlled by the government can bring stability to agricultural markets and shield farmers from a crash in spot prices in the peak period of market arrivals.