India's Food Security Is Thanks to the Green Revolution. Let Us Not Deny It

Science helped India feed itself. Now, there is a clear need for re-imagination for Indian agriculture to bring it in consonance with the ecological requirement of various regions. 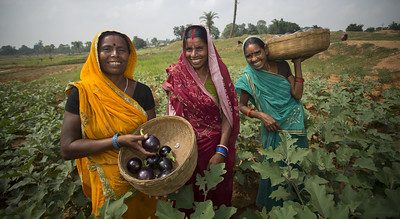 While we celebrate 75 years of India’s independence, there is one area of which we can justifiably be proud.

The history of agriculture in the first two decades after independence is not only fascinating but also inspiring for the sagacity of political leaders, commitment of top bureaucracy, vision of agriculture scientists and the agility of farmers of Punjab and Haryana in adopting new technology.

Indian agriculture would not be the same again.

Ashutosh Varshney’s insightful 1989 paper ‘Ideas, Interests and Institutions in Policy Change: Transformation of India’s Agricultural Strategy in the Mid 1960s’ documents the trials and tribulations of India’s political leaders in the initial years of this successful journey. The critics of green revolution will do well to read this paper.

At independence, India had only 15% area under irrigation and the rest was rain-fed. Chemical fertilisers were hardly used as there was no manufacturing in the country and foreign exchange was so scarce that import of fertilisers was not considered prudent. Nehru had to plead for food aid for the newly independent nation.

The food grains policy commission in 1948 recommended increase in domestic production of food. The food grains investigation commission (1949) was the first to argue for better seeds, chemical fertilisers and investment in irrigation. These were later to become the building blocks of green revolution.

Despite the above recommendations and several other efforts to increase food production, the real story begins in 1964, only after the death of Nehru.

Lal Bahadur Shastri had not studied in elite institutions in the United Kingdom and was more grounded in the rural scene of India. The constant dependence on imported food grains in 1950s would have convinced him that the road to reduce import dependence is not going to be easy even as he had succeeded Nehru as the prime minister.

One of his first decisions was to appoint C. Subramaniam, hailing from Tamil Nadu, (rather than the Gangetic Plains), as the minister of food and agriculture in 1964. Nehru had appointed him as the steel and heavy industries minister but Shastri was aware of his commitment to science and brought him to the agriculture ministry. He has illustrious predecessors in Krishi Bhawan – Dr Rajendra Prasad, Dr Rafi Ahmad Qidwai and K.M. Munshi. The import dependence for food, however, continued all these years.

Shastri also appointed an economist and bureaucrat, L.K. Jha as his principal secretary. This was the beginning of the Prime Ministers Office growing to be an important centre of power in the government.

The Ministry of Agriculture under Subramaniam proposed a new agriculture policy which included import of seeds and fertilisers and investment in irrigation, marketing and extension services as important components. In addition, a price policy to incentivise farmers to produce more was a path breaking initiative.

The finance minister T.T. Krishnamchari was opposed to the proposal of price support to farmers. The planning commission headed by V.K. R.V. Rao was also opposed to the import of seeds and fertilisers as import was seen as a drain on scarce foreign exchange reserves. In his book Accidental India, Shankar Aiyar mentions that Subramaniam offered to resign if his proposals were not acceptable to the government.

Finally, Prime Minister Shastri set up a committee of experts and bureaucrats under L.K. Jha. The committee endorsed the plan prepared by the agriculture ministry and made recommendations on technology, investment and price policy for agricultural produce – at a remunerative price. This led to the setting up of the Agriculture Prices Commission (later Commission for Agriculture Cost and Prices) and the Food Corporation of India.

The rest, as they say, is history.

The success of India’s green revolution proved that science, coupled with good policy, efficient bureaucracy, support of political bosses and co-operative federalism in real sense could defeat the Malthusian predictions of hunger and famine. Green revolution made India a food secure nation.

Since 1970-71, food production in the country has increased at a trend rate of about 3%. This is more than the rate of growth of population at 1.86%. It is a fact that India has to import about 55-60% of its edible oil requirement. In the Modi 1.0 government, there was a successful programme to increase the production of pulses and the same increased from 16 million tonnes in 2015-16 to 25.58 million tonnes in 2020-21. This was also possible due to better varieties of pulse seeds and the policy push.

Despite our successes, malnutrition remains a big challenge and it is not a comforting fact that in 2019-20, 57% of women in the age group 15-49 were anaemic, as were 67% children below five years.

The benefits of green revolution are evident to farmers in Rajasthan and Gujarat also. These were places where the rural prosperity of recent years is due to higher irrigation coverage, better seeds, use of fertilisers and better marketing through APMCs.

However, it is also a fact that many areas which benefited from the green revolution have seen depletion of groundwater and deterioration in quality of soil. Excessive and indiscriminate use of pesticides has resulted in harm to health of farmers and agriculture workers.

There is a clear need for re-imagination for Indian agriculture to bring it in consonance with the ecological requirement of various regions. Indian agriculture is taking the burden of supporting 45.6% of workforce in 2019-20 while its contribution to Gross Value Added was only 18.29%. The economic policies need to create enough non-farming employment so that the excessive dependence on agriculture is reduced.

Science helped India feed itself through the green revolution. Its excesses will also be solved through science itself.

Siraj Hussain retired as Agriculture Secretary, Government of India. With Shweta Saini, he has promoted Arcus Policy Research, a think tank on agriculture and rural economy.