While FCI losses are not that large, we don't have data on some states and can't ignore the lack of wheat silo infrastructure. 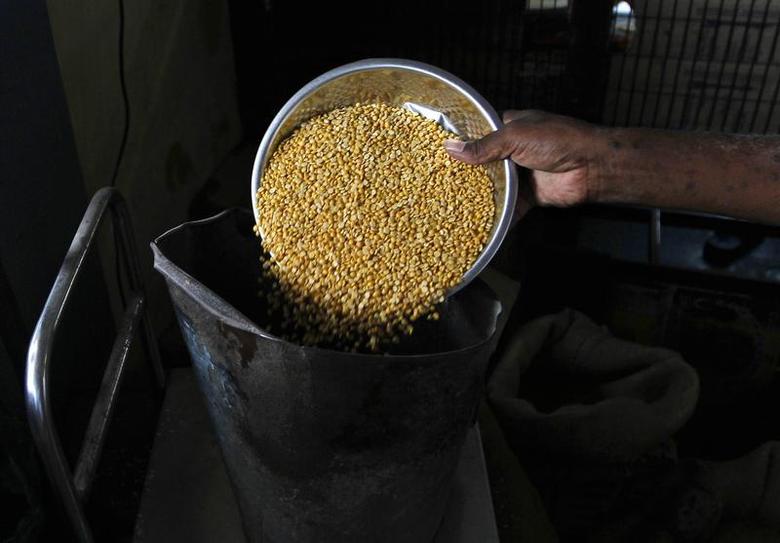 A man who runs a government subsidised food shop weighs lentil inside his shop in Chennai July 9, 2013. Photo: Reuters/Babu

Note: This is the second instalment in a two-part series on wastage of agricultural produce in India. In Part 1, which can be read here, we discussed losses in the supply chain. This article examines losses incurred by government agencies in the storage of procured commodities.

Over the last month, an impression has gained ground that a significant quantity of the wheat and rice procured by the Indian government under minimum support price (MSP) operations is wasted, either due to rotting or being eaten by mice and other vermin.

If we are to properly debate the future of the MSP system – an issue that is particularly relevant in light of the recent farmer protests – it is important to understand the real situation of losses incurred and what has been done by the Centre over the last decade to reduce those losses.

For this, the operations of procurement should be first understood.

No data for DCP states

In states that participate in the Decentralised Model of Procurement (DCP), it is the agencies of the state government which set up procurement centres and the wheat or paddy is procured there. Some DCP states like Madhya Pradesh have well developed APMCs where the farmers bring their produce and the same is procured by the state agencies through cooperatives.

In DCP states, the food grains required for PDS are distributed out of the stock procured from within the state. If there is any surplus, it is handed over to the Food Corporation of India (FCI) which moves it to other deficit states. If there is any shortfall in a DCP state (for example Bihar), the FCI brings food grains from other surplus states.

Figures of storage losses incurred by DCP states are not in the public domain. So, the quantum of losses is not known.

Not too much in non-DCP states

Then there are non-DCP states like Punjab and Haryana where the APMCs are well developed and within a few kilometres of every farmer. In these states, the farmers bring their produce, mostly in loose form in tractor trolleys, to the arthiya’s platform or ‘chabutra’. Here the state agencies procure the same at MSP, bag it and transport it to their warehouses. In case of paddy, the procured stock is transported to rice mills where it is milled over the next five months. This stock is in the books of state agencies and when the paddy has been milled, the rice is taken over by FCI from the state agency and stored in FCI’s own or hired warehouses.

The state agencies hand over the stock of wheat to FCI when it is required to be moved to deficit states. This handover of wheat is mostly a paper transaction at railway siding to which the stock is transported by the state agencies.

Also read: Can the Market Solve the Fears Behind Farmer Protests?

Due to high surpluses in Punjab and Haryana, there is always a pressure to move out the stock so as to create storage space for more procurement.

During the period of storage, some stock deteriorates in quality due to various reasons. If it does not meet the FSSAI standards, it is classified as non-issuable for PDS. The FCI keeps a proper record of grains which become un-issuable. In common parlance these are also called damaged grains. In 2013-14, 523.16 lakh tonne of wheat and rice was issued to state governments from FCI warehouses and the percentage of damaged grains was 0.047%. In 2018-19, the percentage of damaged food grains as a percentage of offtake of wheat and rice was 0.02%.

During the process of storage, FCI also incurs storage losses for various reasons. The most common reason is moisture loss due to prolonged storage of rice. In case of wheat, there can be a gain instead of loss due to moisture. The FCI has been able to bring down the storage losses from 0.22% in 2012-13 to a gain of 0.03% in 2019-20. The total value of storage loss was Rs 457.13 crore in 2013-14.

For DCP states, the percentage of un-issuable stocks, storage losses and movement losses are not in the public domain. So the performance of DCP states vis-a-vis FCI is not known. The NITI Aayog has been conducting a study of efficiency of DCP operations for about four years but it is not yet completed.

In order to reduce the losses during storage and movement, the government has been trying to set up modern silos of steel in which wheat is kept in bulk and not in bags. The movement of wheat from one silo to another can also be done in bulk in specialised wagons. This results in almost complete elimination of losses in storage and movement.

Most of the food grains are stored by FCI in bags in traditional warehouses. As of December 2019, the FCI had a silo storage capacity of just 1.10 lakh tonne out of the total owned warehouse capacity of 127.77 lakh tonne. Similarly, the hired warehouse capacity with the FCI was 251.26 lakh tonne out of which silo capacity was only 5.50 lakh tonne. These silos were built in 2005-09 by Adani Agri Logistics Limited. Base silos of 2 lakh tonne capacity each were built at Moga (Punjab) and Kaithal (Haryana). Field depot silos of 25,000 tonne each were built in consuming states at Chennai, Coimbatore, Bangalore and Hoogly (West Bengal). In Navi Mumbai, the capacity of the field depot was 50,000 tonne. Wheat is moved from base silos to field silos in bulk in trains having specialised wagons in which grain is filled up in bulk at base silos and unloaded at field depots, also in bulk.

However, the progress of silo projects has been below par, primarily due to difficulty with acquisition of land. The silos were to have railway sidings for which 1.5 kilometre of straight land is required by railways. As a result, only 8.25 lakh tonne capacity has so far been built. Out of this, 4.5 lakh tonne is in Madhya Pradesh and 3.75 lakh tonne is in Punjab. Silos of 21.5 lakh tonne are in different stages of construction.

Also read: The Lockdown Revealed the Extent of Poverty and Misery Faced by Migrant Workers

The government has now decided to build 34.87 lakh tonne silo capacity without railway siding under hub and spoke model. Wheat will be moved in containers from these silos to silos with railway sidings.

All of this adds up to only 65.62 lakh tonne. For about 35 lakh tonnes, even the locations of silos are not yet identified. It means we are nowhere near the target of building 100 lakh tonne of silo capacity.

It is clear that infrastructure projects continue to be delayed for years due to various reasons.

Irrespective of the Government’s decision to continue or repeal the three farm laws enacted hurriedly in September 2020, the procurement of wheat is likely to continue without any ceiling as the government has agreed in negotiations with farmers unions to confirm this in writing.

In 2018-19 the government procured 358 lakh tonne wheat while the offtake was 314.7 lakh tonne. In 2019-20 also, the total offtake of wheat was 272.16 lakh tonne while the government procured 341.13 lakh tonne. This year, due to extra allocation from April to November on account of COVID-19, the offtake will be higher but it is clear that open ended procurement will require additional storage capacity. So, the silo projects of wheat, especially in eastern states, are very much required not only to store locally procured wheat but also to facilitate outward movement of wheat from surplus states of Punjab and Haryana.