How Promising Is the Food Processing Industry for Indian Agriculture?

Due to cultural reasons, India has a relatively small market for processed foods, and a number of factors afflict the food processing industry.

In the light of recent farmer protests, there have been apprehensions that corporates will develop a monopoly over agricultural markets, purchase large quantities of cereals at cheaper prices and sell processed products made from them at very high prices.

These apprehensions do not seem very plausible in the near future. Why? One important reason for this is the preference of Indians to consume fresh and home-cooked food rather than processed food made from rice and flour (wheat). Therefore, there is only a limited market for value-added products made from cereals, and big corporates may not have much interest in that.

What backs this argument is that while there is a well-established system of procurement of wheat and paddy (rice) by the Central and the state agencies – and also wholesale and retail trade in the APMC mandis – hardly 5% of the food grains undergo a higher level of processing in India.

In the table towards the end of this article, we provide estimates on the ‘extent of processing of agriculture commodities’ (EPA), in the organised and unorganised food-beverage industry/enterprises in India.

What happens in processing?

The processing of agricultural produce is undertaken at three stages. The first-level is minimal or unprocessed food that is all products whose final sale is in their raw or natural form. These foods may involve cleaning, grading, pre-cooling and packing, but are essentially purchased by the final consumer in their primary form.

These post-harvest activities likely add some value but they are still sold in traditional forms of retail, on hand carts and in markets, predominantly in the loose form. This is minimal processing and the food items in this group are fresh fruits and vegetables, eggs, and certain spices. 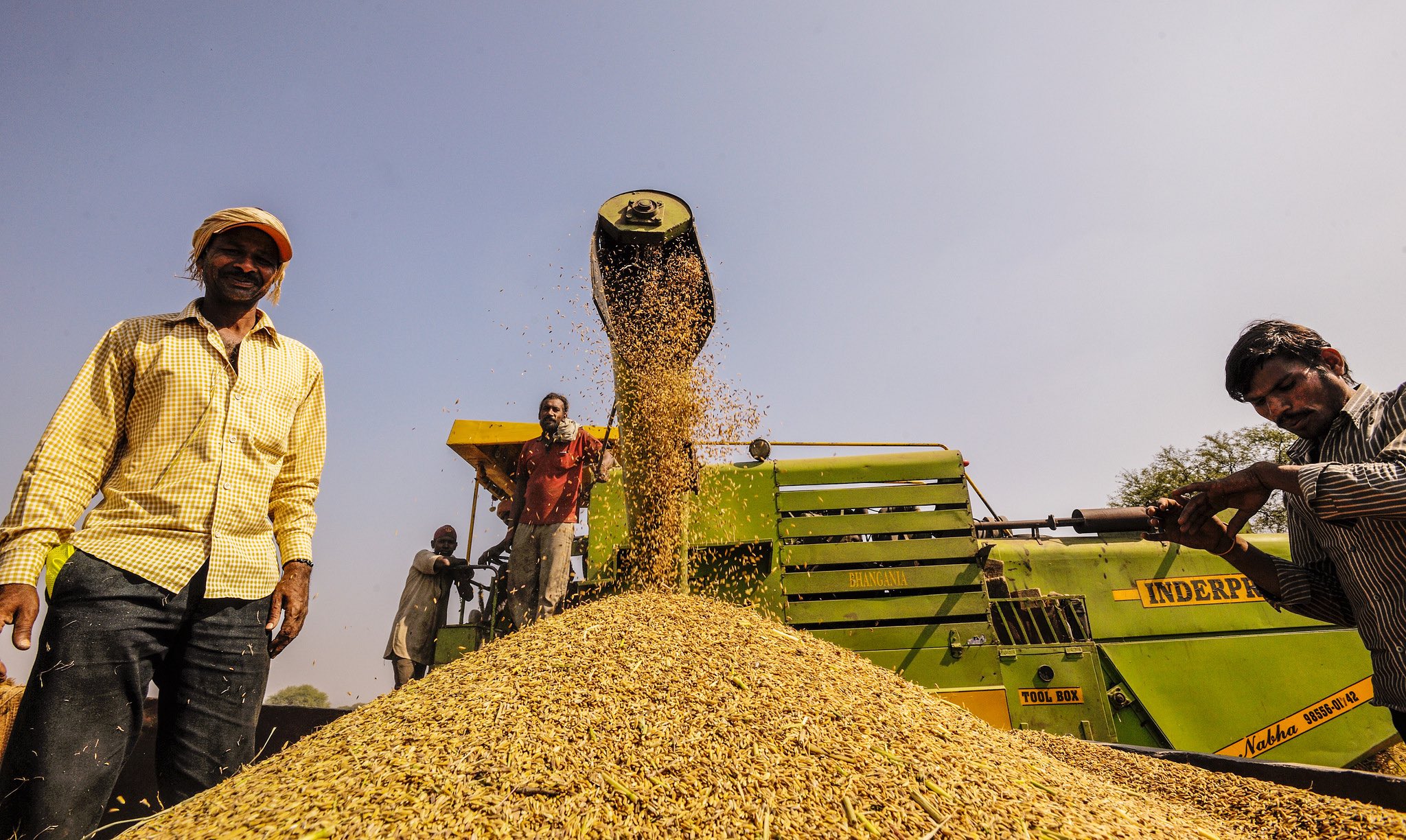 The second level of food processing is primary processing. Almost every farm produce requires some form of basic processing, such as drying, grinding, and milling, hulling and shelling. This level of processing typically transforms products that are not edible in their raw form (such as grains, sugarcane) to an edible form (such as rice, flour, pulses and sugar).

However, the value added in primary processing is relatively small. For instance, when the traders or flour millers purchase paddy from farmers either inside the APMC mandis or outside, the paddy is milled for sale in the domestic or export market. Similarly, wheat purchased by corporates (like ITC or Cargill or Adani) is milled in modern flour mills and resultant products (whole mill atta, maida, bran, husk) are sold in the open market. Lately, flour of coarse grains is also being marketed by companies.

The third level of processing is mainly done by corporates. In this, the form or the shape of primary products undergo significant modification and a much higher value is added to them. From this secondary (also called tertiary) processing, products like bread, pasta, noodles, breakfast cereals, ketchup, juices, etc., are manufactured by corporates and marketed to the public.

Yet a much higher level of processing is the manufacture of ready-to-eat meals, usually marketed in a form that can be eaten just by heating it. These products can usually be stored for longer periods at room temperature. However, products derived from milk such as cheese, butter, milk-based drinks require refrigeration.

Coming up with an estimate

Aggregating across all agriculture commodities, the aggregate EPA for all commodities and for food grains is derived as a weighted average for all commodities in the respective groups (using the share of production value as weights). Making adjustments in the production levels after accounting for seed, feed and wastage, the EPA was estimated for major crops that were reported as inputs in the organised and unorganised manufacturing sectors in 2000-01 and in the organised sector in 2011-12.

The weighted average EPA by the organised industry during 2011-12 was 14.14% out of which nearly 70% was accounted for by food grains, whose EPA was estimated at about 27%.

Among all commodities considered, cereals undergo the highest level of processing. For instance, EPA for paddy in the organised sector is estimated at 34.7%; for wheat 18.4%; for maize 43%; for oilseeds and coffee 100%; but for fruits and vegetables it is just 2.65%. 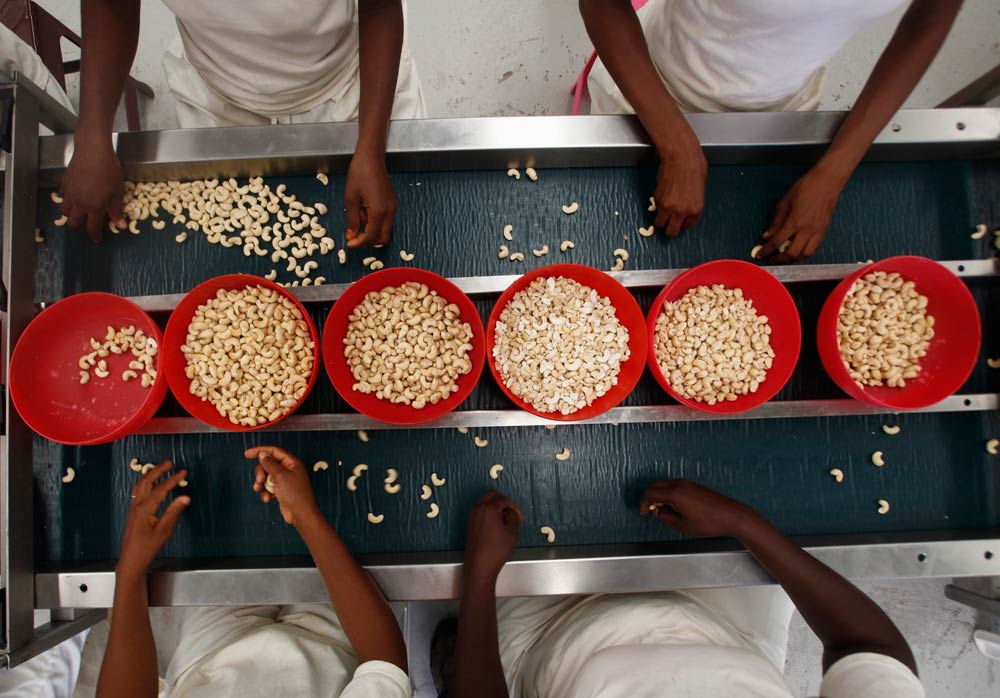 These estimates appear low, considering that most cereals cannot be consumed in their raw product form. This may be because NSSO surveys may not have captured the full extent of primary processing, such as home-based processing by rural families. Besides a significant proportion of wheat and rice are procured by the government to maintain food stocks and it is not clear how these are reported in the surveys, especially when wheat is given to poor consumers and they get it milled in chakkis on their own.

It is intriguing to find how much agricultural produce is processed beyond the primary level. The estimation is done at two stages.  First, all commodities that are used as inputs directly in secondary processing (that is, all non-milling) are measured in terms of their direct input values to the processing industries.

Lack of data for the unorganised sector prevents arriving at a firm conclusion on the trend in the EPA in this sector. Assuming that it grew at a similar rate, and given that the EPA for unorganised in 2000-01 was close to the EPA for the organised sector, one estimate for the unorganised EPA for 2011-12 would be about 6%.  That would bring the total share of agricultural output that has undergone secondary processing to between 13% to 14%, which is substantial but way below in comparison to China and the United States at 23% and 65% respectively.

A low level of EPA reflects a combination of structural problems, with weak value chain infrastructure (e.g. limited temperature-controlled cold chain infrastructure), and a preference for fresh foods by a majority of the consumers, reflecting limited demand.

What are the key messages from this data?

Firstly, corporates will have to invest in creating demand for highly processed but nutritious food products manufactured by them. They also have to make the products affordable.

Secondly, farmers can realise a higher value for their produce if they diversify to non-food grain crops and are able to produce a higher quality of produce. Farmers can find buyers (enterprises/cooperatives/ FPOs) who can process their produce and market it to the population at large in a form that can be stored longer and also retains its nutritional value.

Thirdly, the regulatory regime of the Food Safety and Standards Authority of India (FSSAI) has to enable the food processing industry to come up with new products that cater to the taste of a large segment of the population. Frozen peas, noodles, pasta, chips, dosa and idli powders are examples of successful innovation by the processed food industry.

If India can come back to 6% to 8% GDP growth, the market for processed food will expand, especially in urban areas where more consumers, especially women will be short of time due to their professional commitment.

*Note: Based on ASI and NSS (56th round) data at five-digit national industrial classification codes (106 and 107). The NSS 67th round (2010-11) is not used as it does not provide any details on the type of input that each of the given five input categories represent.

Seema Bathla is a professor at the Centre for the Study of Regional Development, Jawaharlal Nehru University. Siraj Hussain, former Union secretary of the ministry of food processing industries, is currently a visiting senior fellow at Indian Council for Research on International Economic Relations (ICRIER), New Delhi.