'Self Expression or Ideological Difference?': How the Tractor Rally Went 'Off Course'

On January 26, the farmers' movement – as has happened with mass protests several times before – saw a situation where all participants were not in tune. Protesters at the Red Fort on January 26. Photo: PTI

Mohali: The clashes between the police and the protesters at New Delhi’s ITO and the hoisting of the Sikh religious flag at the Red Fort have emerged as the two biggest talking points from the farmers’ tractor rally in the national capital on January 26 – India’s 72nd Republic Day.

For a while, as reports of clashes and the ‘siege’ of the Red Fort by ‘rogue protesters’ broke on television channels and social media, it appeared as if the waves of public sympathy which had been building in favour of the farmers’ movement had encountered a serious blow.

However, the events leading up to these two clashes were not simple.

Days before the tractor rally, as Delhi Police and farmers’ unions under the Samyukt Kisan Morcha (SKM) zeroed in on three routes through which the rally would pass, certain sections among the 50 protesting farmers’ groups had made their dissatisfaction with such a negotiation process quite clear.

Students For Society (SFS), an active youth organisation, which has mobilised thousands of students from Punjab had said: “When no one gave us the permission to come to Delhi in the first place, why are the unions seeking police permission to enter Delhi?”

In a video released by SFS on January 24, organisation head Raman was seen requesting farmers’ unions to listen to their appeal of sticking to the original Outer Ring Road route. Among the many discussions happening between members of SFS, the ideas of marching to the Red Fort and India Gate were also floated.

On the night of January 25, the leaders of the KMSC, Sarwan Singh Pandher and Satnam Singh Pannu, made it clear to outfit members and reporters that they will not follow the assigned route and will carry out their rally down the Outer Ring Road.

On the same night, Deep Sidhu, an actor and activist, and Lakhna Sidhana, reportedly a one-time gangster who has cases under the Arms Act pending against him in Punjab, were also present at the Singhu border. Citing the example of the KMSC , they addressed the gathering and said that those who want to march on the Outer Ring Road can follow their rally.

On January 26, the police barricades which were to be opened at around 10 am for the SKM’s rally to pass, were breached by the KMSC as early as 8 am itself. By noon, reports of clashes at the ITO surfaced. 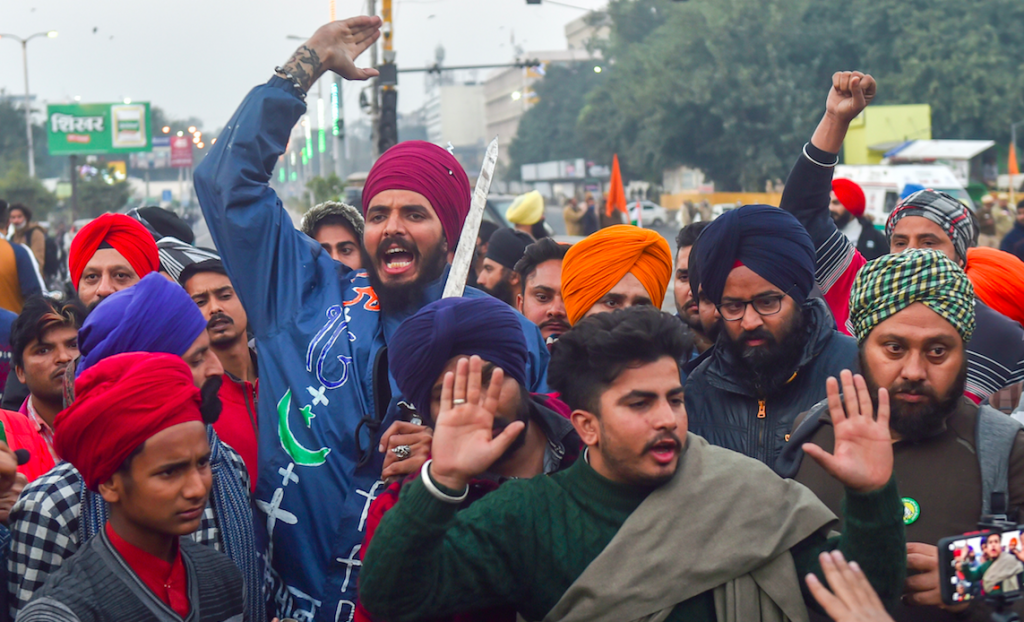 Protesting farmers and their supporters during their tractor march on Republic Day, at ITO in New Delhi, Tuesday, January 26, 2021. Photo: PTI

At the ITO, groups of farmers from Uttar Pradesh and Uttarakhand, who were camping at the Ghazipur border found themselves face to face with the police. Reportedly, these groups breached the set route too but without any early warnings. Speaking to The Wire on the phone on the day of the rally, Tejinder Singh Virk, the chief of Terai Kisan Union, a part of the AIKSCC, said that some youngsters, full of fervour, deviated from the Ghazipur route and attempted to reach the Red Fort. “But we’re urging them to come back,” he had said.

Later in the day he said, “When small groups of farmers from across unions reached the Red Fort, it all went out of control.”

A protester who was a part of the rally which left from the Tikri border told The Wire that at Najafgarh, on the assigned route, a group of farmers and the police got into a skirmish as well. The police kept the rally waiting till about 4 pm at Nangli, and when rounds of tear gas were fired, the protesters abandoned the assigned route. “Instead of taking a right, most of them went straight and entered Delhi city. Some went to the Red Fort, many from Ghazipur were present there too,” the protester, requesting anonymity, said.

At the Red Fort, at around 2 pm, a group of protesters hoisted the Sikh religious flag along with the farmers’ union flag on a pole just below the tricolour flying atop the main dome of the Red Fort building. A section of farmers at the site itself made their disapproval quite apparent and urged protesters to come down from the poles and ramparts.

By evening, the SKM released a press statement saying that despite their efforts, “Some organisations and individuals have violated the route and indulged in condemnable acts. Anti-social elements had infiltrated the otherwise peaceful movement.”

Speaking to The Wire on January 26, Sukhdev Singh Kokrikalan, the general secretary of the Bharatiya Kisan Union (Ekta Ugrahan), which is not a part of the SKM but was a part of the negotiation process with the government and also decided to follow the assigned route of the rally, used sharp words against those who disrupted the movement.

He singled out actor Deep Sidhu for causing the mayhem at Red Fort and instigating other members of the cadre. 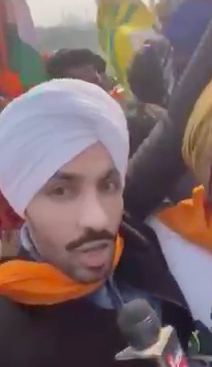 Deep Sindhu, in a screengrab from a live video from the Red Fort.

“In the heat of the moment, young people were led astray by him so he could shine as a leader. Never has Deep Sidhu spoken about the demands of the farmers. He is a tout of the government, there’s no doubt about it,” he added.

Kokrikalan also questioned the intentions of the Delhi Police.  “How could so many people enter the Red Fort like this on January 26? How could it have gone out of the control of the police? Even if they let them in, I feel they escorted them in, then how could they not stop the flag hoisting?” he asked.

“All this has been done to delegitimise the farmers’ movement. The police, the media and people like Deep Sidhu have formed a lobby to discredit us. But we will not let that happen,” he added.

He also asked why police have not arrested Deep Sidhu yet, if the Red Fort entry was such a big problem.

In the earlier days of the movement itself, farmers’ unions had sought to disassociate themselves from actor Deep Sidhu soon after his controversial remarks about Sikh militant Bhindranwale given to a media outlet went viral.

After that incident, the SKM had said that an official press conference will be held by the SKM each day to facilitate clear communication. “All communication from us will be the official position, comments by anyone else should not be taken seriously,” Dr Darshan Pal of the SKM has said in the early days of the movement.

Despite such distancing, Deep Sidhu and Lakha Sidhana were present at the Singhu border and addressed a gathering from the stage on the night of January 25. Raman, a student activist from SFS, who along with the KMSC had set out towards the Outer Ring Road and was present when both Sidhu and Sidhana were addressing the gathering, told The Wire that in their address from the stage that night, neither men said anything about going to the Red Fort or hoisting a flag.

“Publicly, they never said anything about what was to happen at the Red Fort. I personally feel that this movement is a peasant movement not a religious one. But from the stage they only urged the farmers’ unions to let them take the Outer Ring Road route. They also said that those who did not want to go the Delhi Police’s assigned route, can follow the KMSC and the SFS,” he said.

In a press statement released on the night of January 26, Gurnam Singh Chaduni of the BKU Haryana called Deep Sidhu an agent of the government. “He is working for the government, against the farmers. We condemn his actions. This is not a religious movement but that of the peasants,” Chaduni said.

On the other hand, the NIA had summoned Sidhu earlier this month along with many  farmers and Sikh activists, for questioning on allegations of receiving foreign funding from questionable organisations abroad.

This is Deep Sidhu with Modi & Shah. He led the mob at Red Fort today & unfurled the Sikh religious flag there pic.twitter.com/dX9bQjAIim

Sidhu’s phone was switched off when The Wire attempted to reach him. Photos of him with Prime Minister Narendra Modi and BJP’s Gurdaspur MP Sunny Deol have flooded social media. In 2019, Sidhu was Deol’s campaign manager and worked with him closely. To explain his side of things, Sidhu appeared on a Facebook Live on January 26, where he said that the hoisting of the flag was a “spontaneous act.”

“To symbolically register our protest against the new farm legislation, we put up the Nishan Sahib and a farmers’ flag and also raised the slogan of ‘Kisan Mazdoor Ekta’,” he said.

“We held a peaceful protest without destroying anything or causing any damage to the public property…we exercised our democratic right peacefully. If we begin to think that one person or a personality could engineer such a big mobilisation of people, then we will be wrong,” he added.

Actor Sunny Deol whose photos are being  circulated with Sidhu also posted a statement distancing himself from Sidhu. “Today what happened at Red Fort has saddened me. I had earlier too, on December 6, made it clear that neither I nor my family have anything to do with Deep Sidhu,” the statement said.

While on the one hand, the farmers’ unions are convinced that Deep Sidhu had ulterior motives and conspired with BJP to delegitimise the movement, practicing Sikhs who are part of this movement remain unapologetic about the hoisting of the Sikh flag at the Red Fort.

Speaking to The Wire, Amaan Bali, an author and Sikh activist who has been closely following the protest since September said that the flag of the Sikhs has been a part of this movement since the very first day. The Nishan Sahib and the farmers’ unity flags flutter side by side at all protest sites.

He further explained, “The Left camp and the Sikh religious camp are two different groups but working as one unit in this movement. It is easy to make Deep Sidhu and Lakha Sidhana the face of the trouble and say that they are the agents of the BJP. But if one understands the context of this movement and that of Sikh history, then it isn’t all that simple,” he said.

Also read: In 2014, the Sikh Flag Flew at the Red Fort – And the Hindu Rightwing Had No Complaints

Reportedly, Sidhu’s shift from a Hindu rightwing stand to a Sikh rightwing stand has been questioned before. Sidhu himself has said that it was Naxalite-turned-Khalistan proponent Ajmer Singh’s books on Sikh history that changed his perception.

“Most Sikhs, especially the Sikh diaspora feel there was a moral victory in what happened yesterday. They are unapologetic,” Bali said. “This is also a message to Hindutva politics that they cannot succeed till we are around,” he added.

Meanwhile, according to Indian Express, Delhi Police had flagged its concerns to the Union home ministry on possibilities of the tractor parade going “off course”. Despite this, a political call was taken to allow the rally rather than let farmers take a “more confrontationist” stand, the newspaper reported.

On January 27, the Delhi Police named Yogendra Yadav and Rakesh Tikait among 10 farm leaders in an FIR lodged for instigating violence in the capital. Late on Wednesday night, Sidhu and Sidhana were also named in a Delhi Police FIR related to the violence at Red Fort.

Note: This article was updated at 9:43 am on January 28, 2021 to reflect Sidhu and Sidhana’s names being added to an FIR.