The 'Delhi Chalo' march has now reached a critical point with more and more farmers reaching the borders on the call of organisations like BKU, which has mass following in Punjab, Haryana and UP. 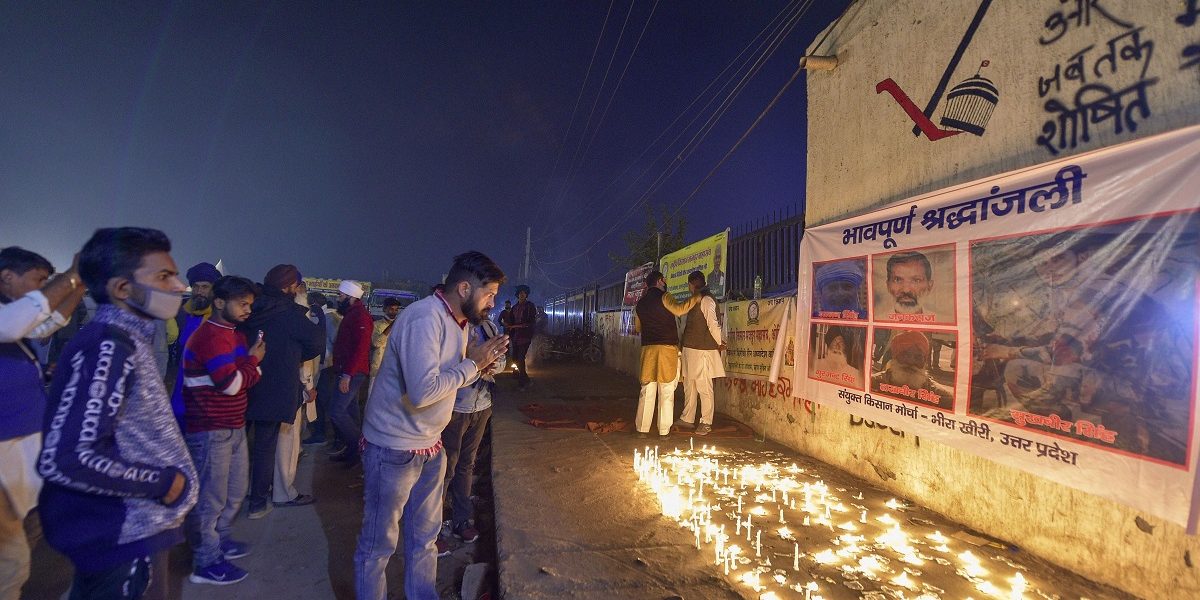 New Delhi: With leaders of the Bharatiya Kisan Union (BKU) and its activists descending in large numbers on Delhi’s border as part of the farmers’ protest to force the Centre to withdraw the three contentious farm laws, parallels are being drawn with the 1988 Boat Club protest.

As the fourth round of talks between the farmer leaders and the Central government ended inconclusively on Thursday – with their next meeting now scheduled for Saturday – the farmers are staying put at the borders and also at the Burari ground, where the government wanted them to shift their protest. The many factions of the BKU – which is headquartered in Western UP – and other organisations have also called upon their affiliate unions in other states to join the agitation to mount pressure on the Centre. 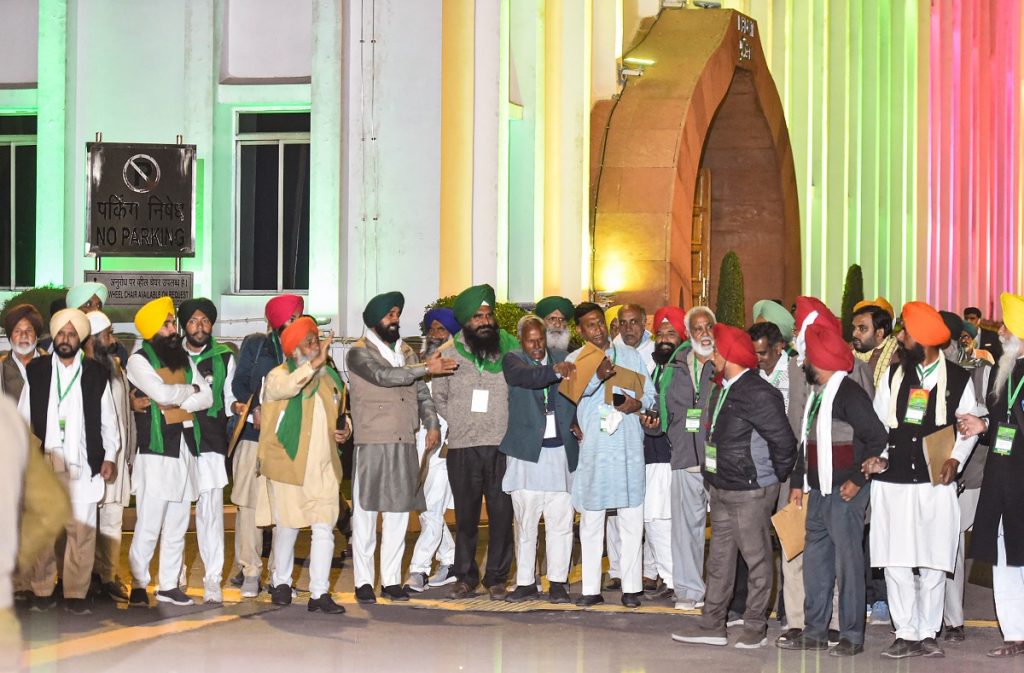 Incidentally, it is interesting to note that the origins of the BKU go back to Punjab, where it was formed by Chaudhary Charan Singh in May 1972 through the merger of 11 farmers organisations. It was originally known as the Punjab Khetibari Zamindari Union and was later renamed Punjab Khetibari Union. The name was once again changed to BKU in 1978 as the organisation spread outside the state.

The western UP chapter of BKU was formed in 1986 by Mahendra Singh Tikait. However, it became one of the most well-known after a rally by the unit in 1988, during which lakhs of farmers laid siege to the Boat Club lawns in the heart of Delhi. They had come with their tractors, prepared for the long haul – as they have now. Among their demands were the waiver of power and water bills and higher price for sugarcane. They left only after some of their demands were met.

This time too, the BKU has adopted a similar strategy. Various factions of the BKU – which had split following the death of Tikait in 2011 – along with the affiliate unions of the All India Kisan Sangharsh Coordination Committee and the Rashtriya Kisan Mahasangh, began their “Delhi Chalo” march in late November.

The main group, headed by Mahendra Tikait’s son, Naresh Tikait, has been camping at the Delhi-UP Ghazipur border for the past five days now. It has been opposing the Centre’s move to change the laws pertaining to farmers ever since the three ordinances were promulgated in June this year.

Also Read: Why Are Some Indian Farmers Hesitant To Believe the Government’s Promises?

‘Open borders for farmers produce, ensure no sale below MSP’

Talking to The Wire, Naresh’s brother and another senior BKU leader, Rakesh Tikait, cautioned that a large number of farmers believed that the Centre actually wanted to gradually do away with the minimum support price (MSP) regime. Also, he said, their concern was that “every effort is being made to push big business towards the agricultural sectors so that the agricultural labour becomes available for industrial work.”

Seeking a rollback of the three laws that pertained to farmers’ produce, trade and commerce; agreement on price assurance and farm services; and essential commodities, Rakesh said the main demand is that inter-state borders should be opened for the farmers to allow the sale of agricultural produce in any part of the country. Farmers should also be given the guarantee that the produce will not sell for less than the MSP anywhere, he said.

However, the Centre – which did not hold any pre-legislative consultations with unions but only called for their opinions through e-mails and letters, paid little heed to the nearly 3 crore submissions it claims to have received, went ahead and brought in the three new related farm laws in September, triggering another wave of protests by the farmers.

As thousands of farmers in Punjab, Haryana, Uttar Pradesh and several other states take to the streets against the new laws, another BKU leader Sahab Singh warned that the intention of the government was also to end the existing traditional grain market system under the Agricultural Produce Marketing Committees (APMCs).

This time round, Punjab was at the forefront of the protests. Farmers in the state are particularly impacted by the new laws, since they primarily grow wheat, rice and sugarcane. The profitability of these crops is greatly dependent on government procurement at the MSP.

In Punjab, the protests over the three new laws have continued since September. The farmers there had blocked the railway tracks to press for their demands, but little heed was paid to them till the time they began their march to Delhi in late October.

BKU, its factions opposed move to have all protesters shifted to Burari grounds

Several farmers union from Punjab, such as BKU (Dakaunda) and BKU (Ekta-Ugrahan), which is one of the largest farmer organisations in the state, were part of the protests that moved towards Delhi despite the Haryana police resisting their advance through its borders and placing hurdles along the way.

In Haryana, the state BKU unit was also very active during the protests and supported the protesters coming from Punjab as they battled the police along the way in their urge to reach Delhi. In fact, the state unit president, Gurnam Singh Chaduni, was even booked by the Haryana police for his involvement in the agitation.

Despite the deployment of forces along the way, the protesters managed to reach Delhi’s borders. Thereafter, as the Centre urged them to proceed to the Burari grounds, the BKU and several of its affiliate unions rejected the demand. While BKU (Dakaunda) president Buta Singh Burjgill said the farmers would stay put at the borders, BKU (Ekta-Ugrahan) leader Jhanda Singh Jethuke had demanded that the protesters should be allowed to go to Jantar Mantar. 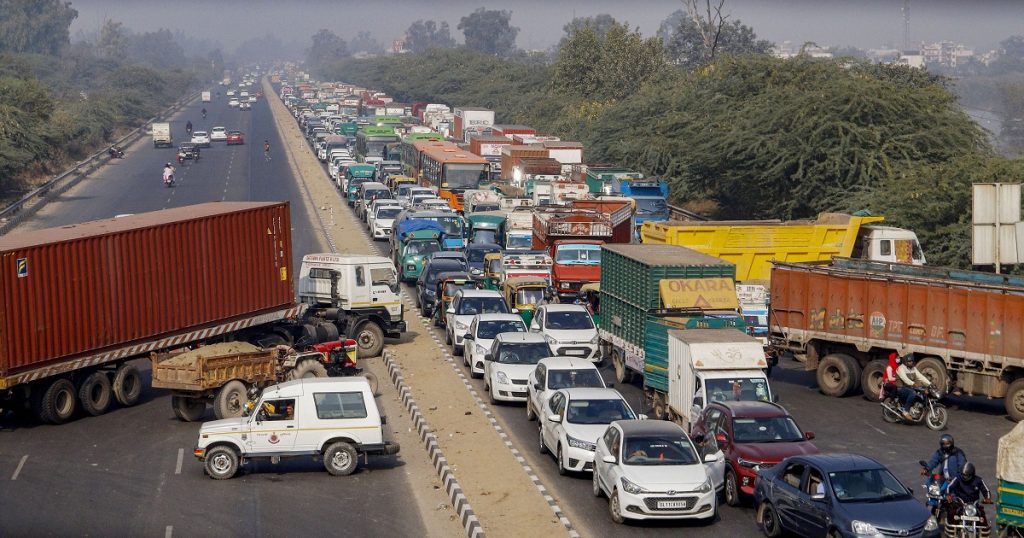 Traffic jam on the Delhi-Sonipat highway near Mukarba Chowk after restrictions were put in place by the security personnel in the view of farmers’ Delhi Chalo protest against new farm laws, in New Delhi, December 3, 2020. Photo: PTI

While the Haryana and Punjab units of the BKU, along with other unions have been blockading Delhi from the northern and western sides – the Gurugram and Faridabad borders in the south are still open – the activists of the union from Uttar Pradesh have since blockaded many of the borders to its east. They have also blocked, either partially or completely, the Chilla border in Noida, and the Ghazipur border on NH-9, Anand Vihar, Maharajpur and Loni borders in Ghaziabad.

Rakesh Tikait has been leading the protesters at the Ghazipur border for nearly five days now. He is also one of the BKU leaders who have been in close consultation with the Centre on the issue.

As 34 farmer unions are in talks with the Centre, some of the leaders are also ensuring that the protests do not get ‘hijacked’ by any political or social organisation. Though the Congress, and especially its Punjab unit, have been backing the protests, the farmers have not allowed political leaders to take centre stage. Also, thus far these leaders have ensured that the protests achieve their objective without any kind of violence.