A recent study in Jharkhand showed that farmers are unaware of how to correctly use different chemicals and do not use any protective gear during the process. A farmer displays the pesticides he has applied over the past few years. Credit: Joe Hill

The deaths and hospitalisation of farmers in Maharashtra raises to the forefront the question of state government culpability for its negligence in regulating the pesticide sector. The National Human Rights Commission has observed that most farmers in the country are not adequately literate and “are relying on the government agencies for the safe use of agricultural products and the ancillary techniques”. This is not 100% correct. In many states, the government is not playing this role, and instead farmers are relying on the information provided to them by retailers and, in some cases, company salesmen.

Though cotton is not grown in Jharkhand on any significant scale, cotton-specific insecticides are widely sold by wholesalers in Ranchi and retailers in districts, blocks and villages across the state. As part of a soon-to-be-released study conducted in 2017 in several Indian states by Pesticide Action Network (PAN) India, the Society for Promotion of Wastelands Development (SPWD) undertook a qualitative study of pesticide use by 25 farmers in Bero block, Ranchi district. Bero is part of Jharkhand’s major vegetable-growing belt, supplying fresh produce to cities like Ranchi and Kolkata. It has the longest experience with chemical-input farming in the state.

During the study, it became clear that most farmers do not know the names of the pesticides they use; therefore, the study relied on asking farmers to show the pesticide bottles and packets kept at their homes. While preparing and applying pesticides on their crops, none of the interviewed farmers use protective gear such as face masks or gloves. Several farmers and farm labourers said that they mix the pesticides and water with their bare hands. One labourer showed injuries to his arm and leg that he received while spraying pesticides without protective gear. 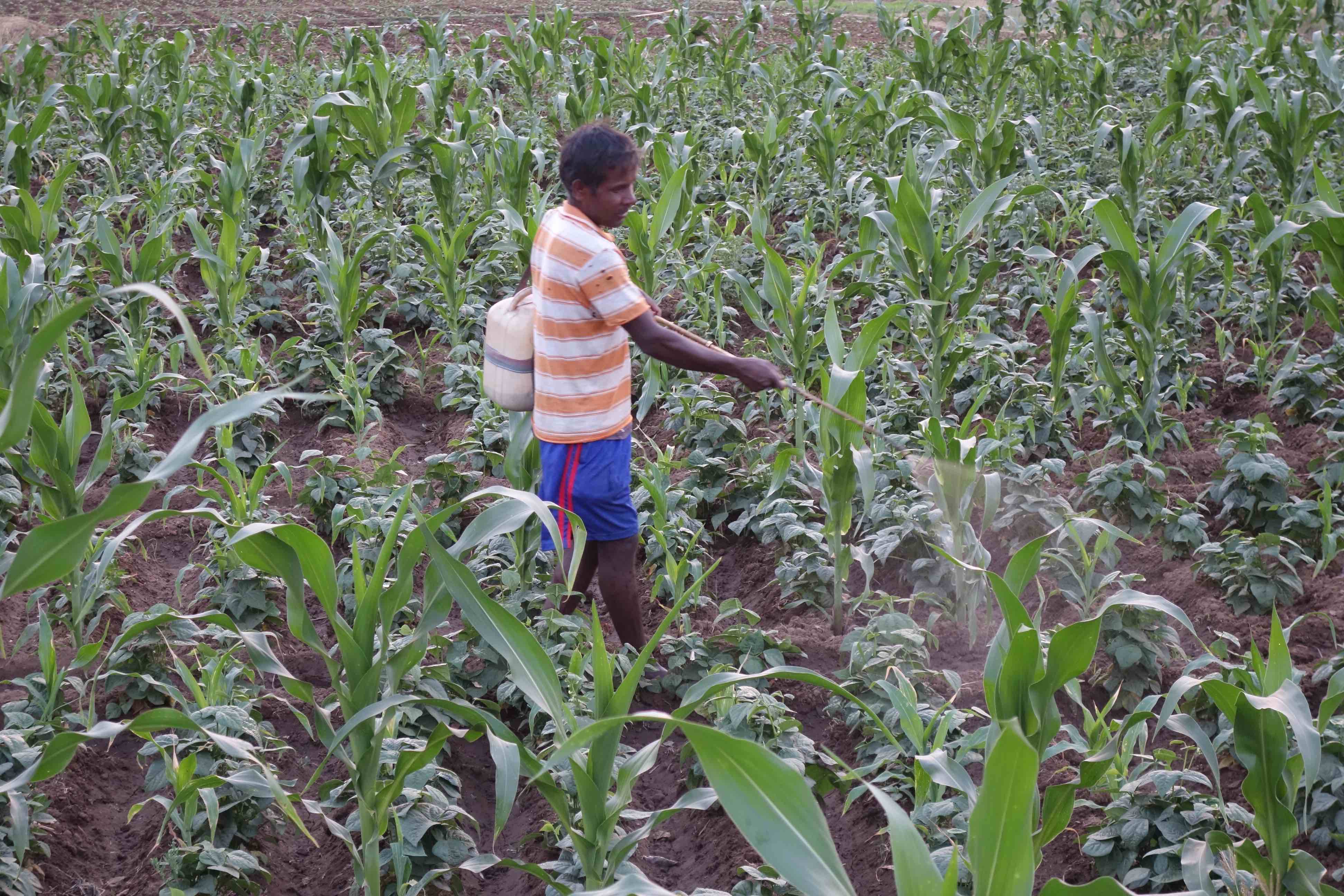 Of the 38 insecticides illegally used, six are approved for use on cotton only. This is a shocking revelation because in the Bero block, cotton is not grown. Acephate 50% + Imidacloprid 1.8% SP, sold under the trade name Lancer Gold, is manufactured by the multinational United Phosphorus Limited. Released in 2006 to be used on cotton, with a waiting period of 40 days from application to harvest, it has been applied to chilli in Bero by one of the study’s sampled farmers. Alphacypermethrin 10% EC, sold under the brand name Alpha Plus by the manufacturer Anu Products Ltd, has been used by two of the farmers on crops like bodi (long beans), bottle gourd, chilli and on mango trees, though it is approved for use only on cotton with a waiting period of seven days.

Chlorpyrifos 16% + 1% Alphacypermethrin EC is a commonly-used insecticide, again wrongly used in Jharkhand. It is approved for use only on cotton, with a waiting period of 15 days, yet four of the sampled farmers have applied it to cucumber, tomato, peas, capsicum, potato, cauliflower, paddy, brinjal and beans. It is manufactured under the trade name Dangal by Ichiban Crop Science Ltd, and by Krishi Rasayan Exports Pvt Ltd under the trade name Anth Super.

Emamectin Benzoate 1.9% EC, manufactured under the trade name Billo by Crystal Crop Protection Ltd, is approved only for use on cotton, with a 15-day waiting period. Yet one farmer was found to have applied it to brinjal. Ethion 40% + Cypermethrin 5%, sold under the trade names Spider and Ananda, is approved for use only on cotton (15-day waiting period), yet has been applied to okra, brinjal, tomato and cauliflower by two of the surveyed farmers.

The sixth cotton-specific insecticide found to be used by the 25 sampled farmers is Profenofos 40% + Cypermethrin 4% EC. This chemical formulation is reportedly responsible for the hospitalisation of some of the Maharashtra farmers. This insecticide, under five different brand names, was found at the homes of three of the 25 sampled farmers. The farmer P. Oraon showed us a bottle of License 99, which he said he used on cabbage, cauliflower and beans. Another farmer, G. Bhagat, showed us three different brands of the same product, Profenofos 40% + Cypermethrin 4% EC, called Minister, Panther and Terror Super, which he said he had applied to paddy. The third farmer, K. Sahu, showed us a bottle of Maxcron Super which he said he had applied to beans. Maxcron Super, approved for use on cotton only, used by a farmer on beans. Credit: Joe Hill

Maxcron Super (Profenofos 40% + Cypermethrin 4% EC) is manufactured by Vimax Crop Science Ltd. The picture on the bottle’s label clearly shows cotton, and on its back contains information in English and Hindi but does not mention it is to be used only on cotton, nor that a 14-day waiting period is to be observed before harvest. The product’s approved use is also not mentioned on the company’s website.

Many pesticide manufacturers do not maintain their own websites and instead advertise their products on websites like indiamart.com and tradeindia.com. The company JU Pesticides and Chemicals Pvt. Ltd, which produces the pesticide Minister (Profenofos 40% + Cypermethrin 4% EC), advertises its products on tradeindia.com, where it is stated that Minister can be used on “cotton, groundnut, brinjal, bhindi, gram, cabbage, cauliflower, tomato, sunflower, soyabean, sugarcane, etc.”. This false information shows blatant disregard for the rule of law in India, as these are not approved uses. 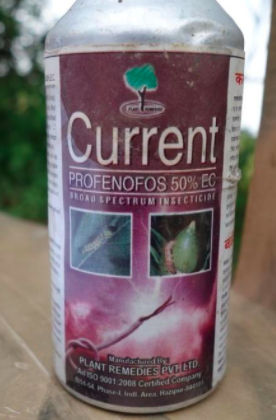 The insecticide Current, approved for use on cotton and soybean only. Credit: Joe Hill

In India, there are two preparations of Profenofos that are approved for use: Profenofos 40% + Cypermethrin 4% EC, approved for use only on cotton, and Profenofos 50% EC approved for use on cotton and soybean. Two of the 25 sampled farmers had illegally applied Profenofos 50% EC to vegetables and paddy. One of the farmers had used the product Current (Profenofos 50% EC), produced by the company Plant Remedies Pvt. Ltd, which started up in Bihar in the year 2000. On the back of the bottle, information is provided in English, Hindi and two other languages, and it is clearly stated that the pesticide is to be used on cotton. On its website, it says that “Current is a versatile insecticides and acaracide which control a number of insect like Aphids, jassids, thrips, whiteflies, bollworm complex, Hispa, Leaf Roller, Gall Midge, Stem borer, Pod borer, Cut worm, Black bug,” – but the sentence cuts out where it should mention the approved uses of the product.

Among the remaining 32 illegally-applied pesticides is the insecticide Monocrotophos 36% SL, which is banned for use on vegetables. This chemical is also implicated in the hospitalisation and deaths of cotton farmers in Maharashtra. Sold under the brand name Monocil by the manufacturers Insecticides (India) Ltd and Dhanuka Agritech Ltd, it has been used by two of the sampled farmers on chilli, capsicum and cucumber. Five retailers were interviewed during the study, and all seemed blissfully unaware of the approved uses and waiting periods of the various pesticides.

The CIBRC maintains a list on its website, ‘Major Uses of Pesticides’, which provides information on the approved uses, dosage to be applied, and waiting periods to be observed for insecticides, herbicides and fungicides. On its homepage, the following text is provided:

…a comprehensive Insecticides Act was passed in 1968 to regulate the import, manufacture, sale, transport, distribution and use of insecticides with a view to prevent risks to human beings and animals and for other matters connected therewith. The enforcement of Act was transferred to the Ministry of Agriculture in the year 1970 by the Ministry of Health and Family Planning. The department of Agriculture of this Ministry took immediate steps to frame the Rules and constituted Central insecticides Board and Registration committee. The states were simultaneously advised to appoint all functionaries mentioned in the Act. After the stage was fully set, all the provisions of the Insecticides Act were brought into force with effect from 1st August, 1971. In the Act and the Rules framed there under, there is compulsory registration of the pesticides at the Central level and licence for their manufacture, formulation and sale are dealt with at the State level.

The regulation of pesticides sale and use is clearly the responsibility of state governments. Recently the government started a diploma in agricultural extension services for input dealers, and this course is running in Jharkhand. One of five interviewed retailers had completed the course, yet was still found to be giving farmers the wrong advice while selling pesticides. One other retailer, located in a remote village in the countryside, said that he had gone to the Krishi Bhawan at Kanke Road, Ranchi to sign up for the course, and was asked to give Rs 5,000  in cash to secure a place, after which he would have to pay the Rs 20,000 course fee.

Kishor Tiwari, chairman of the Vasantrao Naik Sheti Swavlamban Mission, is right to seek criminal action against the pesticide manufacturers and corrupt government officials involved in the deaths of the Maharashtra farmers. He’s also right to demand an immediate ban on chemical farming in India. India’s farmers are not able to comprehend the toxicity of pesticides, retailers are not honest enough to act responsibly and, it seems, government officials are not properly trained or given sufficient resources to carry out their duties to regulate the trade. Tiwari’s recommendations also include a Rs 25,000 per hectare grant to farmers for five years for natural farming and a separate police-administration machinery to prevent the exploitation of farmers by pesticide manufacturers.

However, Tiwari’s claim that the pesticide business in the country is controlled by three multinational companies needs verification. The Jharkhand study shows that three multinationals – United Phosphorus Limited, Syngenta and Bayer – are major players in the pesticide trade; however there is a multitude of smaller Indian manufacturers that are producing the same pesticide formulations under different brand names. All of these manufacturers are conducting their business in an unethical manner, with little regard for farmers and consumers alike.

Joe Hill is with the Society for Promotion of Wastelands Development in Ranchi, Jharkhand.