Here's What Really Happened During the Republic Day Tractor Rally

The vituperation hurled at the farmers on national and social media is heartbreaking. 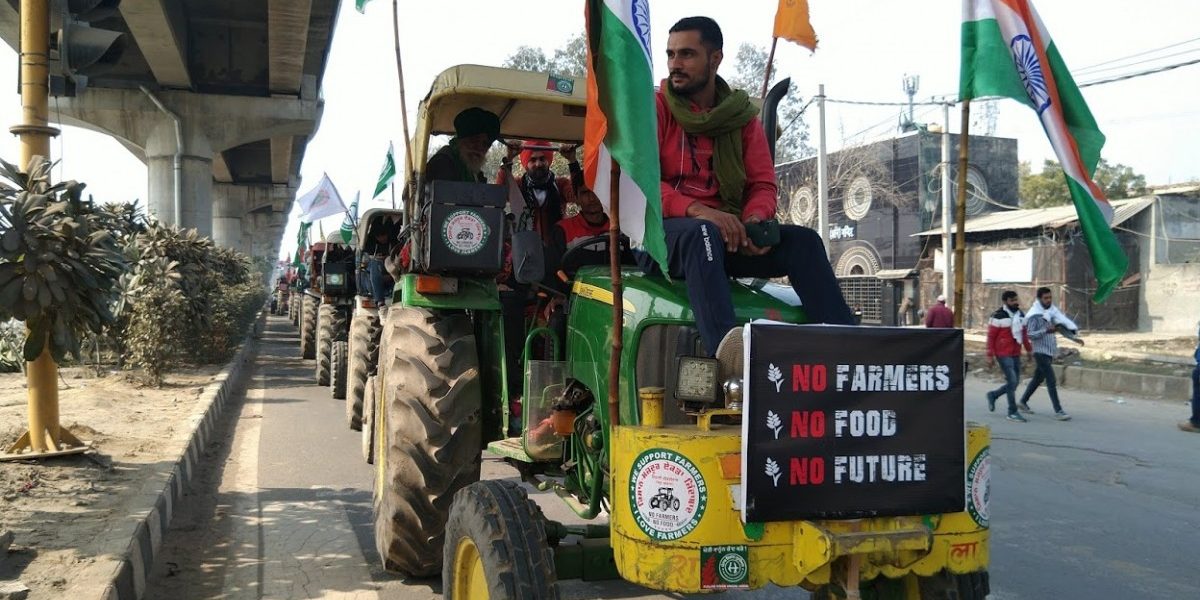 I have never sat on a tractor before. On Tuesday, during the farmers’ Republic Day tractor rally in Delhi, was the first time. I am glad it was in the company of four young Sikh farmers from Fatehabad, Haryana who have been camped out at Metro Pillar No. 757 at Tikri Border where they have been running a langar for the last two months.

One of these Sikh men is Lakhvinder (also known as Happy to his friends), who I met and interviewed one cold and rainy morning in the first week of January. When I asked him what we the people of Delhi could do for him he said, “Just carry our voice to the government please. None of us enjoy sitting here in the rain, but we will, as long as we have to.”

After the interview, Happy told me he needed to return urgently to his village to look after his two-year-old son who hadn’t been keeping well, but said that he would return to Tikri in a couple of weeks and contact me.

The anticipation at Tikri on January 25, the day before Republic Day, is palpable. Happy’s friends are visibly excited about entering Delhi. I ask Kulvinder, who is part of the team that mans the langar here, if he is ready for the parade.

“To tell you the truth,” he says, “we have been practicing for this rally in our own villages and towns, just so we can foresee any difficulties that might arise on the day of the rally, and avoid them. The idea is that no one should be inconvenienced in any way. We will leave Delhi as we found it. We do not want to hurt Delhi or its residents in any way. The tricolour will fly from our tractors, as will our kisan flag, but the tricolour will fly higher!”

Happy adds, “If the police raise their sticks, we will take the beatings. But we will let nothing happen to our tricolour.”

His words, it seems, turned out to be prescient. 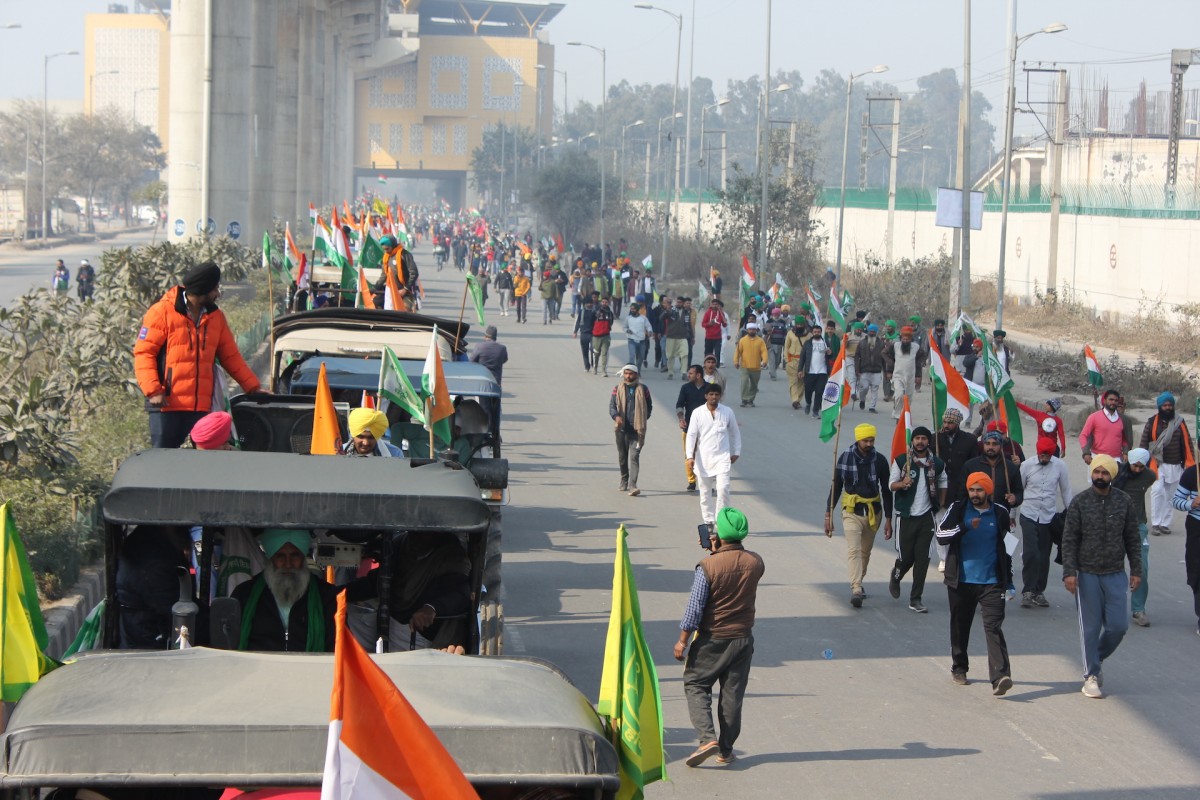 I ask Happy and Kulvinder if I can possibly ride on their tractor with them on Republic Day. They welcome the idea and tell me to report to their langar no later than 8:30 am the next day.

As I walk out of their langar amongst the tractors and trolleys I ask a number of farmers how they are feeling about the rally. All of them tell me how much they are looking forward to it and a great number of them tell me, “Hum Dilli nahi, dil jeetne jaa rah hain (We are not going to conquer Delhi, we are going to win hearts).”

I then see something I am not expecting – a long line of volunteers taking a pledge in Hindi that a farmer is administering to them.

“We hereby pledge
That we will perform our duties to perfection, come what may
That we will work with love and brotherhood
That we will always remember this is our country and these are all our people.
That this movement which has begun peacefully will remain peaceful till the end.
That we will win every heart we meet.
Jai Hind!”

I ask the person administering the oath what this is about and he says it is to remind everyone who is a volunteer at the tractor rally the next day that if “the spirit is right, then the work will be right”.

Marveling at the truth in this insight, I wonder if perhaps our parliamentarians should take a similar oath before every parliament session as well.

The next day, Republic Day, I show up at Pillar 757 at the appointed time. Tikri border is packed with men, women and tractors as never before. I have never seen so many national flags in one place. Tractors as far as the eye can see already have their engines running and are ready to roll down Rohtak road the moment the barricades are removed. The roar of the engines drowns out all possibility of conversation.

Thousands of people are standing on the adjoining walls and rooftops to witness this occasion. Almost everyone is recording the event on their mobile phones. Suddenly there is a roar from the crowd. The police has obviously moved the barricades.

We scramble onto our tractor, a bright green John Deere. Happy, our driver, deftly finds an opening in the convoy and manoeuvres us into the line. As we come out from under Tikri Border Metro station onto Rohtak road, we are greeted with the sight of thousands of local residents by the sides of the road, clapping and waving. It is a sight I will never forget. 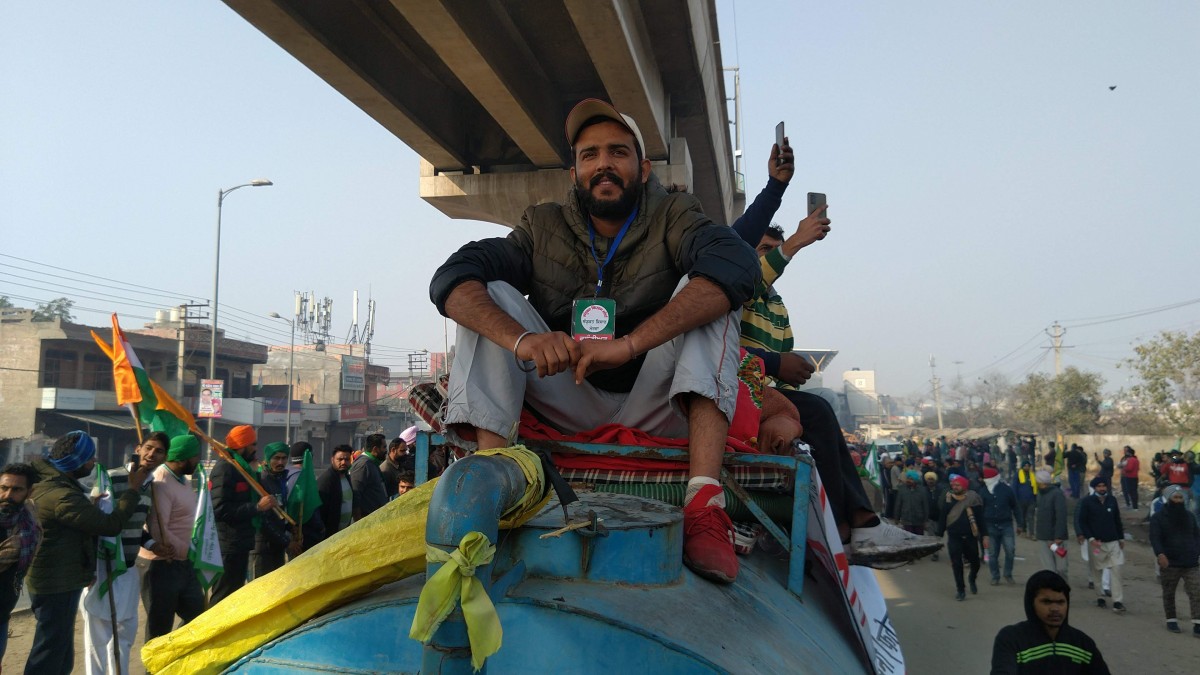 Many of the tractors have boom boxes on at full volume. Men, women and children from the surrounding areas have come out to cheer the farmers on. Some throw flower petals on us. Suddenly a column of Nihang Sikhs on their stallions gallop ahead of the line of tractors. The horses prance, someone yells, “Bole So Nihal!” and the crowd responds with, “Sat Sri Akal!”

My friends on the tractor are savouring every minute of the love and affection coming their way. I am, too.

“The world looks different from the top of a tractor, doesn’t it?” Happy asks me. I agree with him. His friends make sure I am comfortable. One of them offers to stand in the back of the tractor so I can sit in the front.

The tractors are travelling in a straight line. There is ample space on the road for an ambulance to pass by, if needed. Kulvinder wasn’t exaggerating when he said they have practiced for this occasion.

After about an hour and a half of travelling on Rohtak Road, I thank my new friends for their hospitality and get off the tractor just before Nangloi Metro station. They carry on, while I talk to the people standing by the side of the road and ask them why they have come out in support of the farmers.

Their answers are almost unanimous:

The crowd seems particularly fond of the elderly taus on the tractors smoking their hukkas. The venerable old men pose obligingly for the people while they take photos. One particularly genial senior even breaks into a little dance on his tractor, delighting the crowd.

There is camaraderie in the air. It is only about when I pull out my phone an hour later to check my newsfeed that I realise trouble has happened in the city. To my horror I learn that police have tear-gassed farmers at Nangloi, just two metro stations away.

I call Kulvinder to ask if he and his friends are okay. He sends me a video of farmers getting tear-gassed, but assures me they are fine. By the time I finally manage to negotiate the multiple roadblocks the police have put up everywhere and get home in the evening, the news is grim. Barricades have been broken, protestors have been lathi-charged and tear-gassed, and a farmer has died. 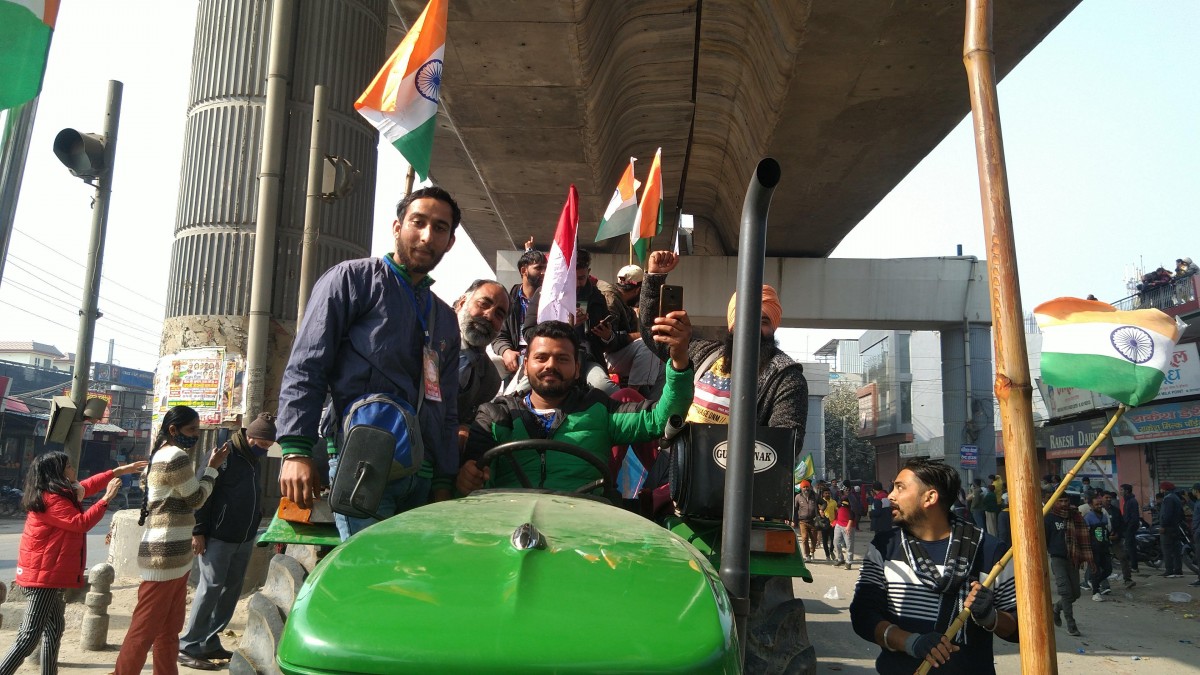 I take a long minute to think about the day. The conclusion I reach is that the tractor rally went well, at least the stretch that I was a part of. I rode on a tractor with decent, kind and concerned people. This, I dare say, was also the experience of lakhs of farmers who took part in the rally.

By contrast, the vituperation hurled at the farmers on national and social media is heartbreaking. The ugliness that happened in different parts of the city was not representative of the movement as a whole. It was a sad exception. I have lost count of the number of times I have visited the farmers at the borders and the number of times the Samyukta Kisan Morcha – the protest coordinating body – has stressed that the farmers follow the prescribed routes on Republic Day, and keep things peaceful and calm.

It is a tragedy that a farmer has died. The violence could have been avoided. But the real question at the heart of this protest is the violence that has been inflicted on the farmers, physically, verbally and systemically.

The violence of the three farm laws imposed on them that threaten to take away what little they have left.
The violence of being forced to pitch camp in Delhi’s freezing winter for two months and the deaths of more than a hundred and fifty farmers in the process
The violence of teargas and water cannons used on them when they first tried to enter Delhi, and the violence this time as well.
The violence that the media inflicts on them daily by calling them Khalistanis and terrorists.

Instead of outraging about farmers “entering the very heart of the capital” (as though that were such a terrible thing in itself) and climbing atop the Red Fort, perhaps we as urban Indians need to step back from the events of the day and think about the distress that our farmers have been subjected to over the last few months, years, indeed, decades.

Perhaps then we will be in a better place to judge the events that transpired in Delhi on January 26, 2021.