Despite a clear refusal on the Centre's part to address the main demand, another round of talks has been scheduled on January 15. 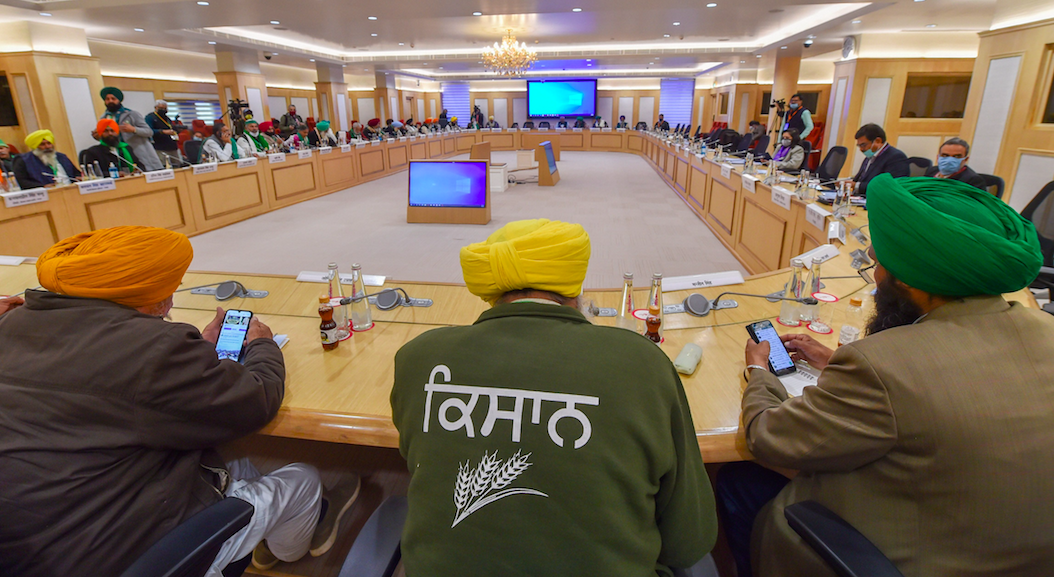 Farmers' representatives during the 8th round of talks with the government over the new farm laws, at Vigyan Bhawan in New Delhi, Friday, January 8, 2021. Photo: PTI

Mohali: In the eighth round of talks between the agitating farmers and the Centre, the latter categorically refused to repeal the three contentious farm laws.

According to The Wire’s sources, the Centre said it “cannot, and will not” repeal the three farm laws, which is one of the prime demands for which farmers, agricultural labourers and the allies from across the country have been agitating against the government for the last 44 days, at five border points surrounding New Delhi.

Despite a clear refusal on the government’s part to address the main demand, another round of talks has been scheduled on January 15.

The Centre also told agitating farmers that it is best to leave to matter to the Supreme Court, sources said.

Farmers’ leader Hannan Mollah has said that farmers are “ready to fight till death,” and that going to court was not an option. PTI has reported that farmers’ unions will decide their next course of action on January 11.

The All India Kisan Sangharsh Coordination Committee’s Kavita Kuruganti echoed Mollah when she said, “It is indeed a very said day for Indian democracy, that in the middle of talks, an elected government, which has constantly been cheating the farmers by ignoring the talks, by preventing the farmers from protesting, is relying on the SC to resolve the issue.”

In a show of resolve against the Centre at Friday’s meeting, a farmers’ leader held up a handwritten note which read ‘jaa jitangey, jaa marangey’ (‘either we will win, or die’). Leaders of the farmers’s unions reportedly neither took a break for lunch, nor refused the tea offered to them.

On the matter going to the Supreme Court, Kuruganti said: “The court has already looked at the eviction of farmers’ (from the protest site) issue and said that it’s the democratic right of the farmers to protest…The other issue is the constitutionality of these farm laws, whether the Centre has the right to pass laws on a state subject. Even if the court looks at this issue and says ‘yes’ or ‘no’ on it, the problem remains. Because the farmers are not just raising the constitutional validity of the laws, but the very implications on this kind of a policy direction and legislation. This is an issue to be seen in a policy domain, not in a legal domain. The unions are very clearly saying that whatever the Supreme Court says, they won’t budge until the laws are repealed.”

Farmer leader Joginder Singh Ugrahan has said that the government is clearly “testing” farmers’ strength. “We won’t bow down, it looks like we’ll spend Lohri and Baisakhi festivals here,” he said.

With another meeting ending inconclusively once again, the stalemate between the two sides seems to have taken the shape of a confrontation. Farmers’ unions are preparing to march into Delhi on January 26 during the Republic Day celebrations.

In a sharply worded statement to the media, Gurnaam Singh Chaduni of Bharatiya Kisan Union’s Haryana Unit said that on January 26 they will play the “final match with the government”.

He added, “We are warning the government that we will forcefully break all barricades and enter Delhi on January 26. They can lathicharge us, or shoot at us, we don’t care. We will play the final match with them. Whatever happens on January 26 will be the government’s responsibility, it shall be blamed on them.”

On December 30, the Centre and farmers’ unions reached common ground to resolve protesting farmers’ concerns over the rise in power tariff and penalties for stubble burning.

The Centre had agreed to exclude farmers from the law to curb pollution, the Commission for Air Quality Management in the National Capital Region and Adjoining Areas Ordinance, 2020.