As many as 120 digital petitions asking for the repeal of the farm laws have been going strong. 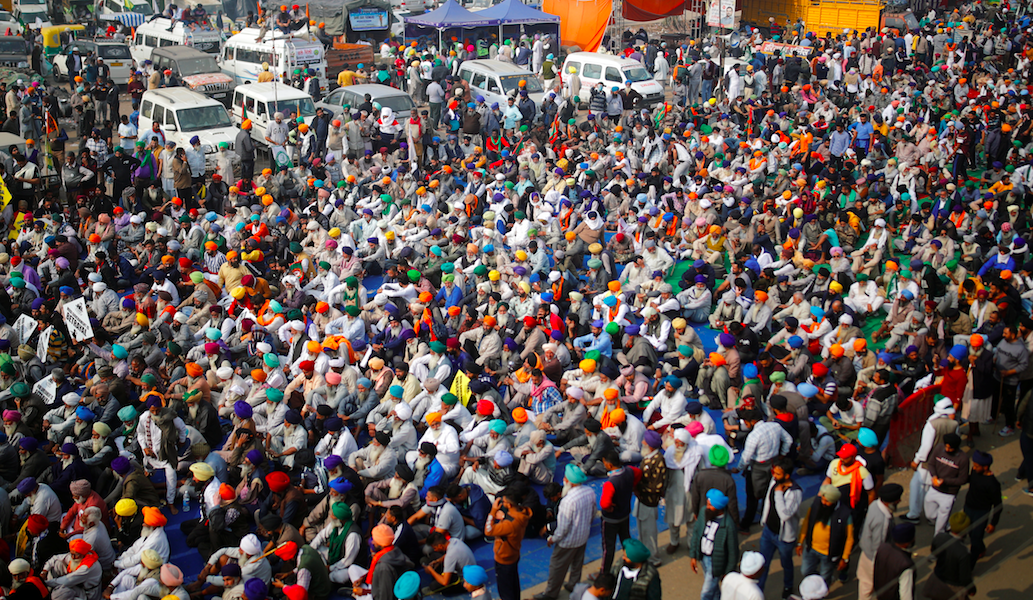 New Delhi: As farmer unions intensified their protest against the contentious farm laws on Tuesday by observing a Bharat Bandh, lakhs of citizens, especially the Punjabi diaspora, took to the internet to show their solidarity with the cause of the farmers.

Even as Twitter and Facebook were abuzz with solidarity messages, as many as 120 digital petitions asking for the repeal of the laws have been going strong. Many of them were initiated by Indian nationals in the United Kingdom, Canada, and the United States of America.

Ever since farmers began to camp at Delhi borders, over 3,00,000 people have signed such petitions, reflecting a tide of support even from the Indian diaspora.

While many of these petitions were initiated by Sikh Indians living abroad, many other communities joined in to mark their support.

“The biggest petition among these was started by the American Sikh Council, and has been signed by over 50,000 people over the last three days. Similarly, a petition by Prabhjot Bath, a resident of the UK, has received over 50,000 signatures,” said a Change.org official.

Another rapidly growing petition, titled ‘Justice for Farmers of India’, was started by Canada-based Gina Takhar.

“My grandfather used to say that once in your life you need a doctor, a lawyer, a policemen and a preacher, but everyday, three times a day, you need a farmer,” writes Gina in her petition.

Mindy Athwal’s petition, starting from Wolverhampton in the UK, has been signed by over 30,000 people. A similar number of people have signed another petition by Parminder Brar, a resident of Canada.

A petition by Ravinder Uppal from Birmingham in the UK has been signed by almost 10,000, while another one started by US-based Kiran Badesha has received over 4,000 signatures.

“The backbone, sweat and tears of our farmers have fed millions and raised generations of Indians. Without whom, millions would have starved and generations would have never left the country. We need them, and they need us more than ever, today,” says Kiran in the petition.

While most of these petitions, addressed to either Prime Minister Narendra Modi or Union agriculture minister Narendra Singh Tomar, demand the withdrawal of the three farm laws, some also asked the government to drop attempt to murder charges against Navdeep Singh, the farmer who climbed atop a water cannon and turned it off. Some of these petitions also took the debate forward by demanding the government to give farmers a guaranteed MSP for their produce.

One petition also asks the Indian media to either report neutrally or announce their bias on air, the Change.org official said.

In his petition, Shubh Karman, a Chandigarh resident, writes, “Authorities could have avoided all this through a peaceful dialogue which is being demanded by the protesting farmers from the very first day. Please sign my petition to bring the government’s attention towards the much needed peaceful dialogue, establishment of grievance redressal mechanism along with the inclusion of the MSP clause in writing by the government. Also, all farmers forcefully arrested and booked should be released and acquitted.”

“This has shaken the national consciousness. Let us raise our voices in support of these farmers so that it reaches the top echelons so they do not mistreat our hardworking farmers instead agree to their genuine demands,” says Siddhu.

Advocating a peaceful resolution, Nida Hasan, country director of Change.org, spoke about the surge in the number of petitions on the issue. “Change.org as a people’s platform consistently reflects concerns of citizens, which is true of the farmer’s stir as well. I really hope that the standoff is resolved peacefully through mutual dialogue,” said Hasan.

Interestingly, one of the most-signed petitions was started by Ashwani Mahajan, the national co-convenor of the RSS-affiliated Swadeshi Jagaran Manch. However, his effort appears to have been an afterthought and was floated after the surge of petitions demanding a complete rollback of the three farm laws.

In his petition to the agriculture minister Tomar, Mahajan does not demand a repeal of the laws, but contends that the laws can benefit farmers if certain amendments are introduced. Notably, the government representatives who have been meeting with the farmer unions have also been suggesting possible amendments to the laws, which the unions have rejected.

Curiously, he appealed to the farmers to restrain from “politicising” the issue of farm laws. Mahajan’s own hesitant stance in supporting the farmer movements reflects the larger Sangh parivar’s sentiment which has been in two minds in extending its full solidarity to farmers.

Noticeably, the RSS-affiliated Bharatiya Kisan Sangh (BKS), which has been critical of the farm laws initially, also amended its position of unqualified support to the farmers movement a day ahead of the nationwide strike on Tuesday, December 8. On Monday evening, BKS said that it was not in favour of a total withdrawal of the farm laws but wanted them with “improvements” – something which Mahajan’s petition also echoed. At the same time, it said that it would not support the call of Bharat Bandh.

Support for farmers in the West surges

Nevertheless, the RSS’s ambiguous stance has been unable to impact a majority of the Sikh diaspora in the West. Among the many rallies that different organisations have organised, the one in San Francisco, Bay Area, stood out. On December 6, an organisation called the Jakara Movement, a Sikh organisation, organised the California Solidarity Rally to support Indian farmers in their protest. Here are a few glimpses of the rally.

Protest caravan in #SanFrancisco on agricultural farmers hurting in #India thanks to big companies. 🇮🇳 pic.twitter.com/hkHigPvqrw