At the fifth round of talks with the Centre on Saturday, the delegation of farm leaders refused to accept any amendments to the three contentious farm laws. 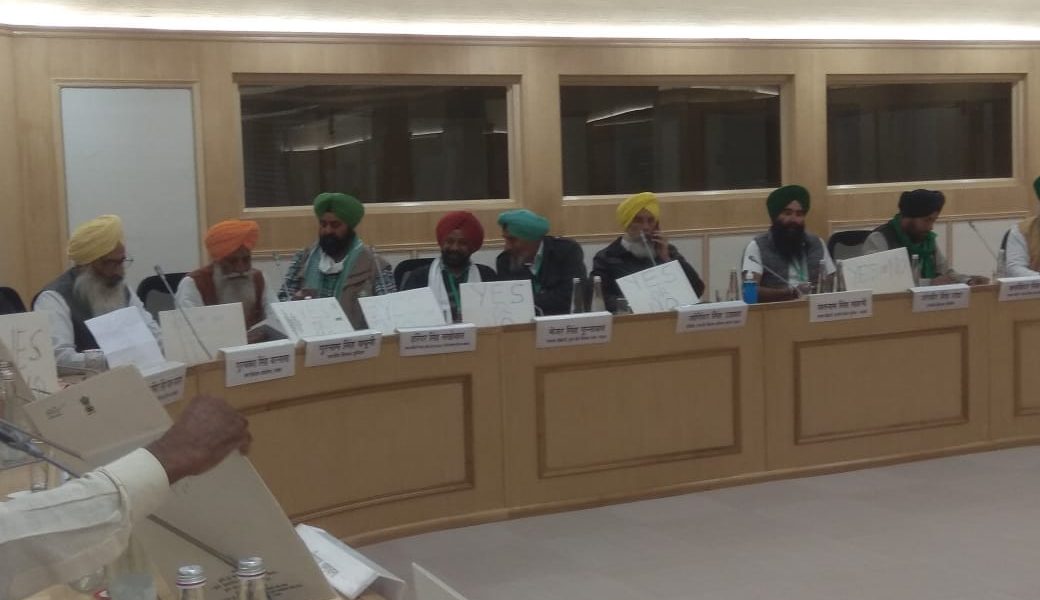 Farmers' leaders are seen holding placards with 'yes or no' written on them, in bold letters. The delegation wanted a clear answer from the government on whether the laws would be repealed. Photo: Special arrangement

New Delhi: As their fifth round of talks with the government ended in a deadlock, thousands of farmers protesting the Centre’s new farm laws stayed put on the borders of Delhi with Haryana and Uttar Pradesh, blocking key routes leading to the national capital.

At the fifth round of talks with the Centre on Saturday, the delegation of farm leaders refused to accept any amendments to the three contentious farm laws that have led to massive protest by farmers around New Delhi. Reportedly, the Centre was in favour of significant amendments but the farm union leaders have refused. They demand total roll back.

According to sources, members of delegation are trying to force the government to make it clear in black and white if they will repeal the laws or not. However, the government is not responding to this pinpointed question. The farmers’ delegation even observed silence in the meeting room, sources confirmed.

The government proposed another meeting on December 9 with the representatives of protesting farmers and requested them to send back the elderly, women and children to their homes from the protest sites. The government has told the farm delegation that they need more discussions within the government to present a concrete proposal, sources said. Agitating unions have agreed to meet again on December 9.

The agitating farmers had on Friday announced a ‘Bharat bandh’ on December 8 and threatened to intensify their agitation and block more roads leading to the national capital if the government did not accept their demands.

What was once a thoroughfare teeming with vehicles, Delhi’s Tikri border has tents pitched on tractors, people busy chopping vegetables to get food ready, solar panels to charge mobile phones, medical camps and elderly resting with hookahs. “This is going to be our home in the near future as it is going to be a long fight. We are here to stay,” says 50-year-old Gurunam Singh who came from Punjab’s Mansa district. “We have plenty of everything here. We have enough provisions for at least six months.”

Since they landed at the Delhi gateway nine days ago, these farmers have been preparing ‘langar’ every day to feed over 5,000 people, including locals and those who visit the protest site.

Some have set up solar panels at the protest site so that the farmers can charge their mobile phones, while many local groups are providing things like water, soap, dry fruits and mosquito repellents. Temporary toilets have also been set up at Tikri border.

Acknowledging the support, the farmers said people have not just opened their doors to them but also their hearts.

At the Singhu border, two brothers who are doctors and belong to a farming family of Haryana’s Sirsa district are providing free medical care to the agitating farmers. A medical camp has been set up by Sukhwinder Singh Brar and Ramanjit Singh Brar with the help of their doctor friends. “Everyday, we are giving medical care to almost 1,500 people coming up with different complaints,” Sukhwinder said.

Also read: ‘Must Protect Our Inheritance’: Why College Students Are Joining the Farmers’ Protest

The closure of borders led to the diversion of traffic from Mukarba and GT-Karnal road that led to traffic jams on alternative routes. The Ghazipur border on NH-24 remained closed for traffic from Ghaziabad to Delhi. The Chilla border on the Noida Link road also remained shut for traffic coming from Noida to Delhi due to the farmers’ protest near Gautam Budh Dwar.

The agitating farmers have expressed apprehension that the new laws are “anti-farmer” and would pave the way for dismantling of the minimum support price system, leaving them at the “mercy” of big corporations.