Among those who have rejected the line that protesting farmers are Khalistanis are senior BJP leaders, Hindu farmers in Punjab and a wide cross-section of public personalities.

Farmers from Talwara town of Hoshiarpur district carrying banners, mentioning - ‘We are farmers, not terrorists’ at Singhu border in Delhi. Photo: Kusum Arora.

Jalandhar: Despite concerted efforts by rightwing propagandists to defame farmers protesting against the three agriculture laws by labelling them ‘Khalistanis’, this angle has found little popularity among the general public. On the other hand, more people have come out in support of the farmers, setting aside ideology and political affiliation.

A large number of Hindus from Punjab, whom the saffron party considers its voter base in the state, have notably rejected the efforts by several Bharatiya Janata Party leaders to insinuate that farmer protesting are actually part of the Sikh separatist movement.

Speaking to The Wire, senior journalist Jagtar Singh, who spent over four decades covering Punjab’s religio-political dynamics and militancy, and who has recently authored a book Rivers on Fire:Khalistan Struggle said, “Khalistan is an idea for which 40,000 people died but that’s a different issue. This is the first ever secular mass mobilisation against the Modi government in the country.”

He added, “They are scared that the protest can shake the divisive agenda of the Sangh Parivar, hence they are dubbing Sikh farmers as Khalistanis. They want to communalise the farmers’ protest and to counter them, and are thus confined to Khalistan.”

Amolak Singh from Punjab Lok Sabhyachaar Manch said that this is a protest of farmers, by farmers and for farmers.

“I want to highlight that on November 28 at midnight, a volunteer in the farmers’ protest, 55-year-old Janak Raj from Barnala district was burnt alive after the car in which he was sleeping in accidentally caught fire. Janak Raj was a car mechanic and he volunteered to provide free vehicle repair service to the farmers marching to Delhi. Was he also a Khalistani?” he asked.

Similarly, people in Haryana have provided langar, free shelter, and other support to farmers, said Singh. “Are they also Khalistanis? It is the BJP IT wing and the Godi media’s agenda to amplify the Khalistan narrative with the sole aim of scuttling our protest and we should remain alert,” he added. ‘Godi media’ is a term used in popular parlance to indicate channels of media comfortable with taking a pro-government and pro-BJP line.

Doctor-turned-politician Dharamvir Gandhi, whose medical camp at the Delhi-Haryana border has been quite busy, wrote on his Facebook page about the need to counter the Khalistani angle.

Gandhi wrote in Punjabi, “We will have to counter the fake narrative of BJP IT cell and the Godi media against farmers protest ourselves. I appeal to all my friends to make accounts on Twitter, raise their voice in support of farmers and start trending ‘#FarmersProtest’ and ‘#IStandwithFarmersChallenge’, because BJP’s troll army will not leave any stone unturned in defaming our farmers. It is important to answer them.”

Two senior BJP leaders from Punjab who also served as ministers in the previous Shiromani Akali Dal-BJP government, Manoranjan Kalia and Surjit Kumar Jiyani, were ones to reject this line.

Kalia said, “It is absolutely wrong to term farmers Khalistanis. I am going to take this matter up with the Central leadership. Farmers’ protest is totally non-political, though Congress, SAD and AAP have been trying to gain ground in this struggle.”

Jyani, who had approached farmers for talks with the Modi government, echoed Kalia. “Farmers have been facing a crisis in agriculture for the last 70 years. Prime Minister Narendra Modi’s only concern is to ensure that farmers’ income gets doubled. However, some people who don’t like Modi and the BJP-RSS are defaming our government. Talks are the only solution to solve this stalemate,” he added. 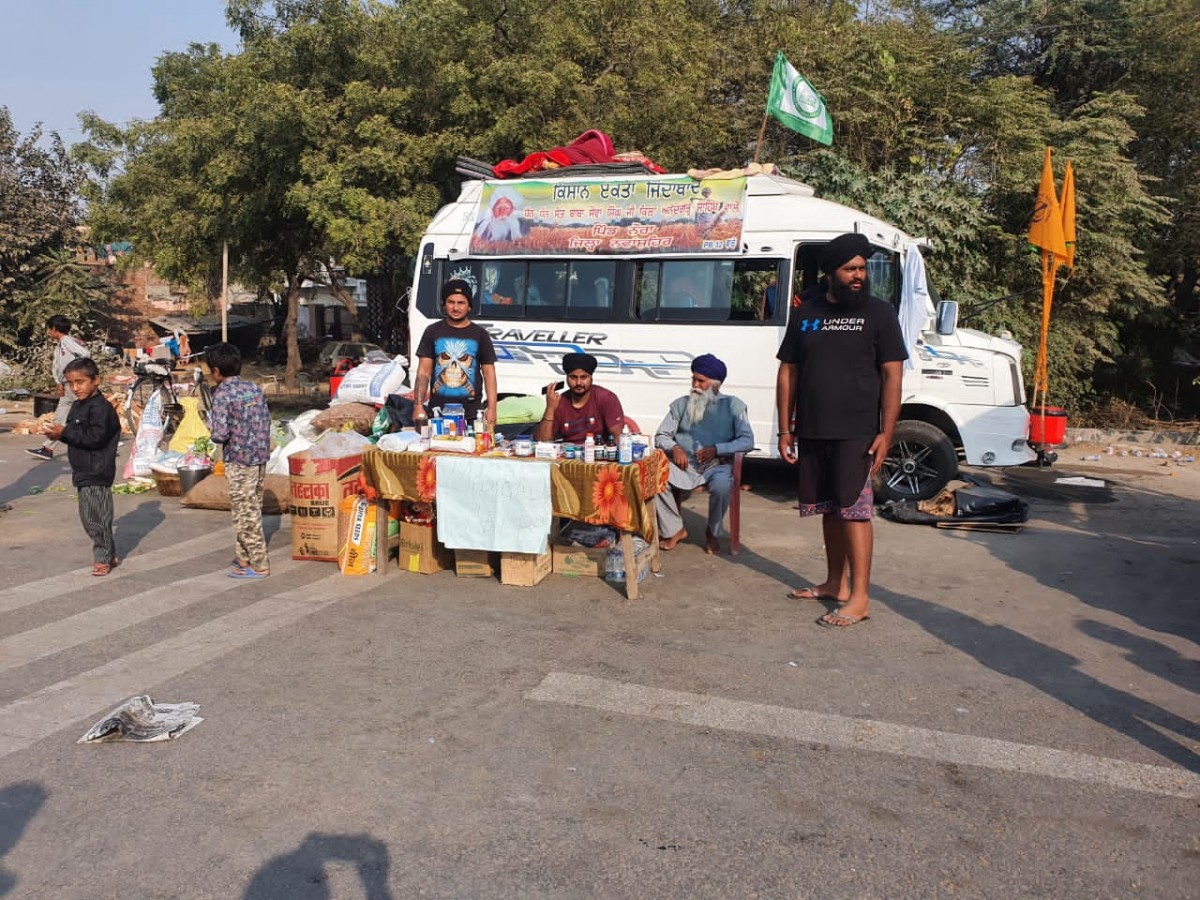 A free medical camp organised by a Sikh group from Nawanshahr district at at Delhi border. Photo: Kusum Arora.

Gagandeep Singh, a farmer and a journalist from Hoshiarpur district, who runs his own YouTube channel The Story said that earlier he used to avoid airing his views on social media but following the farmers’ protest, has felt compelled to dispel such propaganda against them.

A sarpanch-cum-farmer Saurabh Minhas from Nangal Awana village in Talwara town of Hoshiarpur district also said that he used to be a BJP supporter, but has been forced to review his decision.

“Modi government’s agenda is to quell the farmers’ protest by hook or by crook and that is why they are branding us ‘Khalistanis’. Ours is a predominantly Hindu Rajput village and everybody here is up in arms against the farm laws. We will not come back from Delhi until PM Modi revokes the farm laws,” he said.

Minhas also lashed out at Haryana chief minister Manohar Lal Khattar for claiming that farmers from his state were not part of the protest.

“People in Haryana were wholeheartedly supporting us. A family in a village in Panipat gave shelter to a group of elderly farmers who were lost on their way back home to Punjab in the dark. It was such a heart warming gesture but BJP is out to tarnish our image,” he said.

Army men not spared of abuse

Rightwing groups have also been targeting retired army officers from Punjab who lent support to farmers with the same terms.

A Chandigarh-based retired Major who did not wish to be identified was trolled with communal terms – like ‘Khalistani,’ ‘madrassa chhap’, and ‘sickular’ – for merely supporting the farmers’ cause.

“There are groups within India and abroad who keep on creating a wedge between different communities, and all they do is amplify their ideology. I feel that we should be extremely careful against such fundamentalists, who just want division in the society,” he said.

Also read: The Siege of Indraprastha: The Food Providers of the Republic Come Calling

Former northern and central army commander Lieutenant General H.S. Panag had also been labelled a ‘Khalistani’ and ‘Pakistani’ by the rightwing after he forewarned the Modi government of the looming threat during the India-China clash that led to the killing of 20 soldiers at the Galwan valley in June this year.

On farmers also being labelled as Khalistani, he said, “By terming farmers as Khalistanis, the rightwing is forcibly injecting an idea which has taken a backseat in Punjab. It will be very counterproductive for the government and the nation at large. The government must understand that farmers protest is not led by political parties but by farmer unions, who are majorly Left oriented and pro-poor farmer groups. This whole ‘Khalistan’ bogey has no takers at all.”

Krantikari Kirti Kisan Union president Dr. Darshan Pal said, “We did not let any political party use our platform to further their agenda, how could we let any fundamentalist exploit our struggle? There is absolutely no question of any Khalistan angle to this, it is a farmers’ movement.”