This runs contrary to what the Centre told the Supreme Court on why it wasn't increasing the MSP. 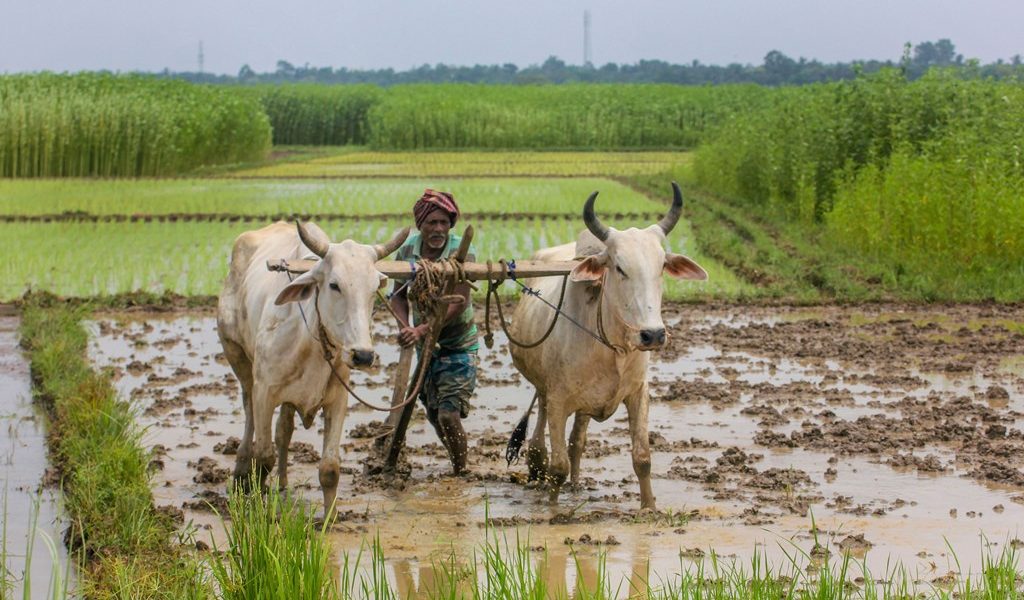 The prime minister and president have both said in parliament that farmers will be given 1.5 the cost of production as MSP. In its manifesto for the Lok Sabha elections 2014, the Bharatiya Janata Party had promised this. However, in 2015, the Centre filed an affidavit in the Supreme Court that they could not increase the MSP to 1.5 times the cultivation cost because it would lead to ‘market distortions’.

Now, Prime Minister Narendra Modi has claimed that farmers are being given an MSP which is 1.5 times the cultivation cost. Calling Modi’s claim false, many agricultural experts and activists said that the increase in the MSP was to be calculated against C2 costs, but the government has used the A2 + FL cost instead. The Swaminathan Commission recommendations have thus not been implemented, even though the government claims they have.

The A2 + FL cost includes all cash transactions and payments made by the farmer, including the cost of family labour. It also includes the rental value of the leased land. C2 includes A2 + FL cost as well as the rent of owned land and interest on owned capital. Hence, the MSP calculated on the basis of C2 cost is much higher as compared to A2 + FL.

On a petition seeking implementation of the Swaminathan Commission’s recommendations, the Centre had said that the Commission on Agricultural Costs and Prices recommends the MSP after taking several things into consideration. Therefore, an MSP of 50% more than the cost of agricultural produce would distort the market and unsettle it. The Central government has given the same rationale for not increasing the MSP to 1.5 times C2.

Also read: If Crop Insurance Continues to be Viable, Will Centre’s Plan for Smoothing Out Other Wrinkles Work?

However, internal confidential documents of the Ministry of Agriculture obtained by The Wire reveal that the government itself acknowledges that there is no proof of a direct link between an increased MSP and market distortion.

The documents show that the Ministry of Consumer Affairs, Food and Public Distribution, Ministry of Commerce and Industry and Ministry of Finance had insisted that increasing the MSP would have a significant impact on exports and would breach commitments made at the World Trade Organisation. However, the Ministry of Agriculture had dismissed the arguments.

Replying to a letter sent by the Directorate of Economics and Statistics of the Ministry of Agriculture, dated June 3, 2019, the Ministry of Consumer Affairs, Food and Public Distribution wrote that higher levels of MSP may lead to higher international prices which will significantly affect exports.

The Department of Consumer Affairs wrote, “The relatively higher levels of MSP may lead to higher prices vis-à-vis international prices affecting exports in case of surplus production. This may lead to build of buffer of agricultural produce with the Government, disposal of which may become a major issue.”

Also read: Ground Report: Congress Is Not Fulfilling Promises Made to Farmers in MP

The agriculture ministry refuted the claim and responded, “Wholesale prices are determined by demand and supply conditions. Higher MSPs and sufficient procurement are necessary for obviating the Cob-web phenomenon faced by farmers and stabilise prices for consumers.”

The agriculture ministry further wrote, “Wholesale prices of some of the crops are ruling below MSP reflecting bumper production of foodgrains in the recent years. This supply response of the farmers owes itself to incentives in the form of higher MSPs and bonuses for crops like pulses that had exhibited a chronic shortfall over consumer demand earlier when food inflation was in double digits and overall inflation above comfort zone.” 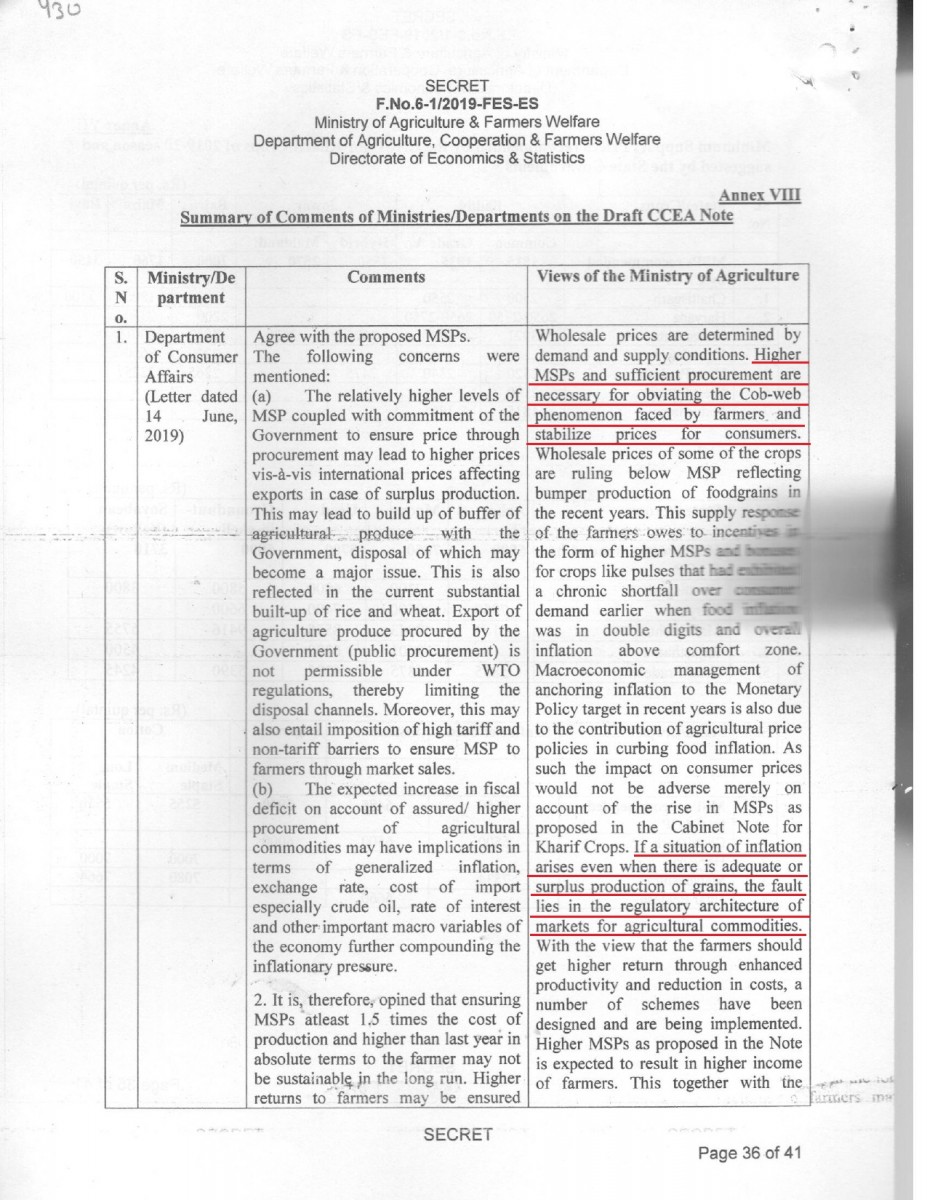 The Ministry of Agriculture’s response.

It is pertinent to note that while the Centre has been telling state governments not to give bonuses over the MSP on any agricultural produce, the Union ministry itself calls for bonuses.

The Ministry of Agriculture wrote, “The impact on consumer prices would not be adverse merely on account of the rise in MSPs as proposed in the Cabinet Note for Kharif Crops. Macroeconomic management of anchoring inflation to the monetary policy target in recent years is also due to the contribution of agricultural price policies in curbing food inflation.

It further added, “If a situation of inflation arises even when there is adequate or surplus production of grains, the fault lies in the regulatory architecture of markets for agricultural commodities.”

In its letter dated June 14, 2019, the Ministry of Commerce asked the Ministry of Agriculture to follow WTO commitments while working out the MSP, according to which specific support has to be kept within 10% of the total value of production of the commodity in developing countries like India. The ministry said, “Any procurement under administered prices (MSP) attracts WTO rules on domestic support. The support is product specific and considered to be trade-distorting.” 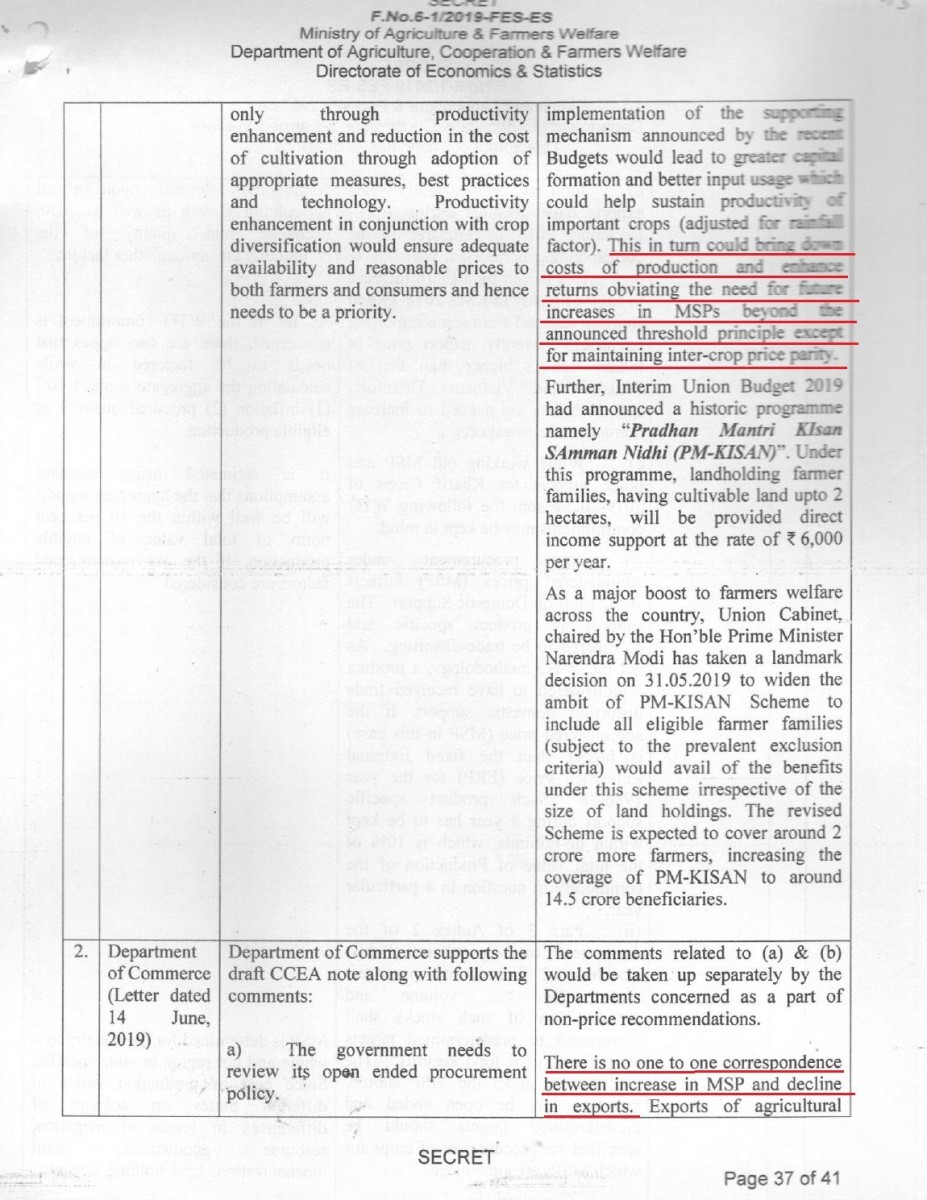 The Ministry of Agriculture’s response.

In response, however, the Ministry of Agriculture clearly maintained that there is no direct correspondence between increase in MSP and decline in exports. The ministry wrote, “Exports of agricultural commodities depend upon global agricultural growth as well as GDP, exchange rate, quality of the commodity, etc. among other factors.”

As per the WTO’s methodology, a product is considered to have received trade distorting domestic support if the administered price (MSP in this case) is higher than the fixed external reference price (ERP) for the year 1986-88.
The Ministry of Commerce said, “Such product specific support during a year has to be kept within de-minimis, which is 10% of the total value of production of the commodity.”

To this, the Ministry of Agriculture replied, “As far as the WTO commitment is concerned, there are two issues that need to be factored in while calculating the aggregate support viz., (1) inflation (2) procured quantity as eligible production.”

“It is estimated using standard assumptions that the aggregate support will be well within the 10 per cent norm of total value of eligible production, if the above mentioned factors are concerned,” the ministry added in its response.

In addition, the Department of Expenditure of the Ministry of Finance had advocated to curb the MSP in its letter sent on June 17, 2019. The ministry suggested that the use of MSP to boost production could be stopped. Here too, the Ministry of Agriculture said that an increased MSP and sufficient procurement are necessary to protect farmers from the problem of trade distortion. 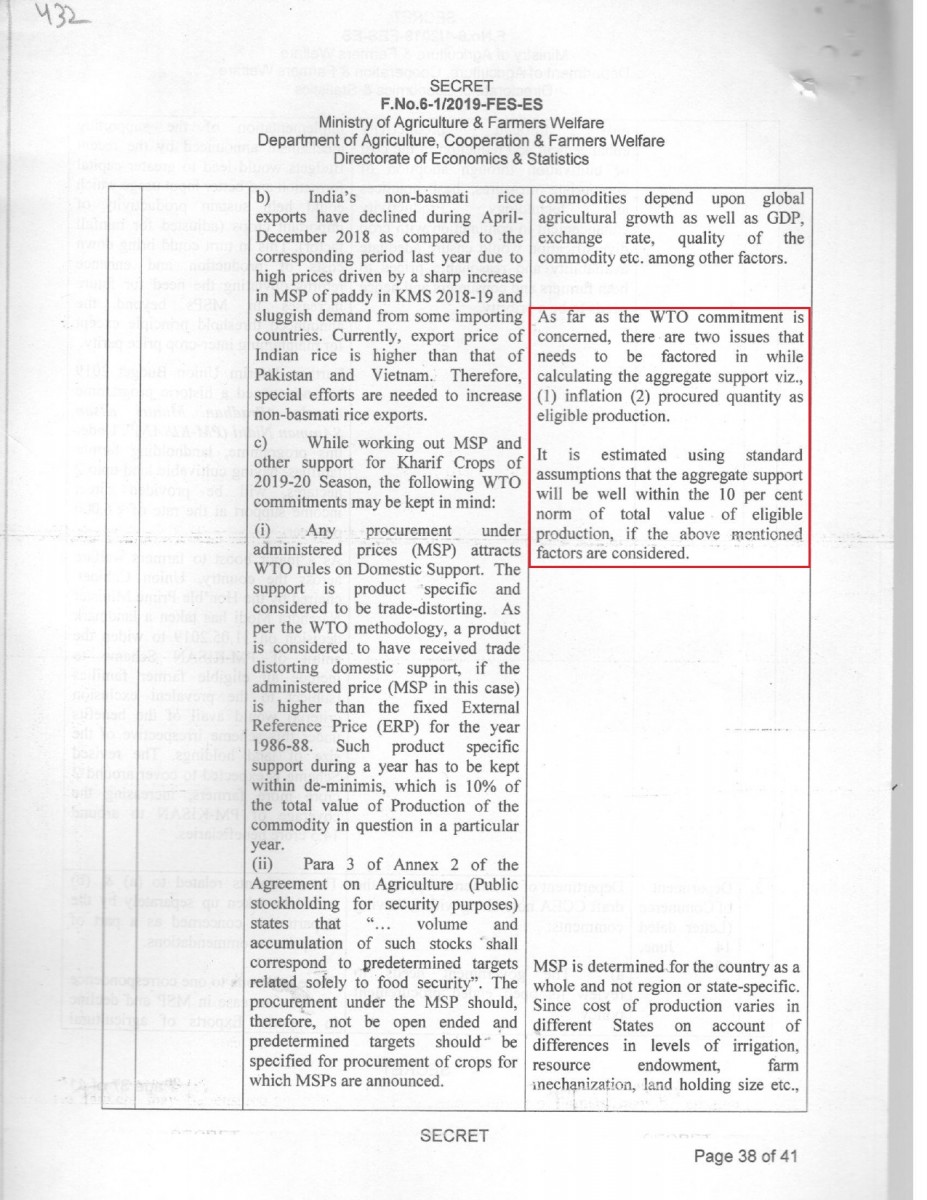 Chengal Reddy, chief advisor of the Consortium of Indian Farmers’ Association, filed a petition in 2011 demanding the implementation of Swaminathan Commission recommendations. He alleges that the government has misled the Supreme Court.

Reddy told The Wire, “If the agriculture ministry believes that there is no direct link between increase in MSP and decline in exports, then why did the government file an affidavit in the Supreme Court claiming that fixing the MSP at 50% more than the cultivation cost can cause market distortion? It is totally an attempt to mislead the court.”

Agrarian experts and activists have also expressed concern over not calculating the MSP against C2 costs. Swaraj India president Yogendra Yadav claimed that the Ministry of Commerce has always adopted anti-farmer policies. “The government says that they have increased the MSP by 1.5 times but this is not the reality. However, a bigger scandal is that whatever MSP they have fixed, farmers do not receive it. Even the official figures of the government show it.”

It is noteworthy that the Centre announced heavy cuts in the allocation of two major schemes – PM AASHA and MIS-PSS – in the recent Budget session.

Agrarian expert and senior journalist P. Sainath says that the government’s claim that increasing the MSP would cause market distortion is complete hogwash. “If corporate sectors can be granted huge subsidies, can’t farmers be facilitated even a little bit?” he asks.

“The government had made promises to the people, and it should find ways to fulfil those promises. The government does not see a problem in spending crores of rupees on a bullet train, but increasing the MSP for farmers is a problem for them.”