Farmers March to Express No Confidence in Govt, Stopped a Kilometre From Parliament

Around 1,500 farmers from across the country congregated in Delhi to protest the MSP 'hike' and passed their own 'no-confidence motion' against the government. 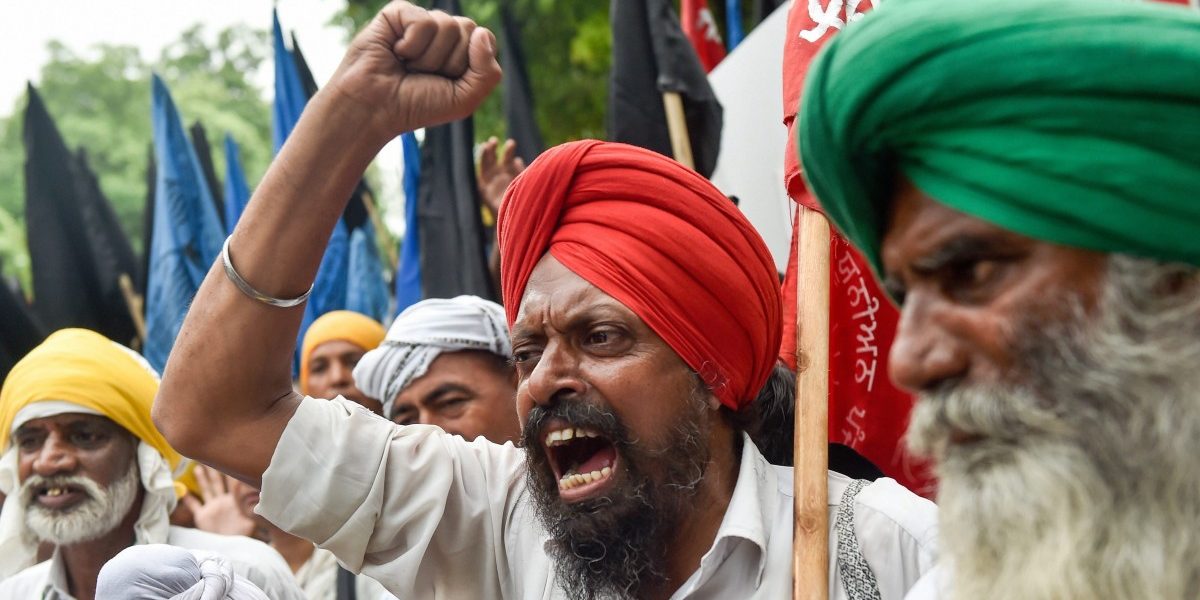 Farms from various states gathered to raise their slogans against the NDA government in New Delhi on July 20, 2018. Credit: PTI/Ravi Choudhary

New Delhi: In a show of strength on July 20, farmers from several states, under the banner of All India Kisan Sangharsh Coordination Committee (AIKSCC), marched in New Delhi to “express no confidence in the Narendra Modi government”.

The protestors alleged that the Modi-led National Democratic Alliance at the Centre has reneged on all its election promises made to farmers and has attempted to mislead farmers on the issue of minimum support price (MSP). Farm leaders from across the country were also joined by several political leaders including members of parliament.

Around 1,500 farmers, who travelled several thousand kilometres, gathered at Barakhamba Road as the heavy morning rain subsided. From Faridkot in Punjab, 56-year-old Balraj Singh travelled 400 kilometres to be a part of the protest. The owner of four acres of land – he’s a small farmer by the government’s definition – he grows wheat in the rabi season and rice in the kharif season. Wearing a white kurta-pyjama, and sitting on the pavement in one of the by-lanes in the area, he held a poster with text in yellow and background in black. “Neta raaj jaayega, kisan raaj aayega (The rule of politicians will end, farmers will rule),” the poster read. Farmers hold up placards at the protest in New Delhi on July 20, 2018. Credit: The Wire

Singh’s immediate concern is the repayment of a crop loan of Rs 2 lakh on his Kisan Credit Card. “There is no profit from growing any crop. Even with wheat and rice, where we get the MSP, we are making losses. Loans keep piling up,” said Singh as several other farmers who had travelled with him from Faridkot joined in. “Modi has said that he has given us a profitable price. But where is it?” a farmer said, pulling his empty pockets inside out to elucidate his point.

“Humare chehre pe likha hai kya ki hum bewakoof hain? Aap kehte ho ki aapne de diya. To kisan atm-hathya kyun kar raha hai (Do our faces say that we are stupid? You say that you have provided profitable prices. Then, why are farmers committing suicide?)” asked a farmer who identified himself as Bhagat Singh. “You tell everyone that I am Bhagat Singh. I am his spirit. Every farmer in Punjab today is his spirit.” He brought out a poster with Bhagat Singh’s picture on it. The text on the poster read, “Lagta hai wapas aana padega (Looks like I will have to come back).”

“Half of my wheat was destroyed because of pests. Then, the cost of inputs like urea, fertilisers and diesel has gone up hugely. I did not earn a single rupee. Even Amarinder has gone back on his promise of loan waiver,” Balraj Singh said, referring to Punjab chief minister Captain Amarinder Singh’s promise of farm loan-waivers prior to the 2017 Punjab assembly elections.

The chief minister had promised that if he is voted to power in Punjab, he would provide farmers a loan waiver to ease their financial stress. However, despite almost 17 months in power, Singh’s government has yet to fulfil its promise. As a result, farmers in the state have been agitating against the Congress government. 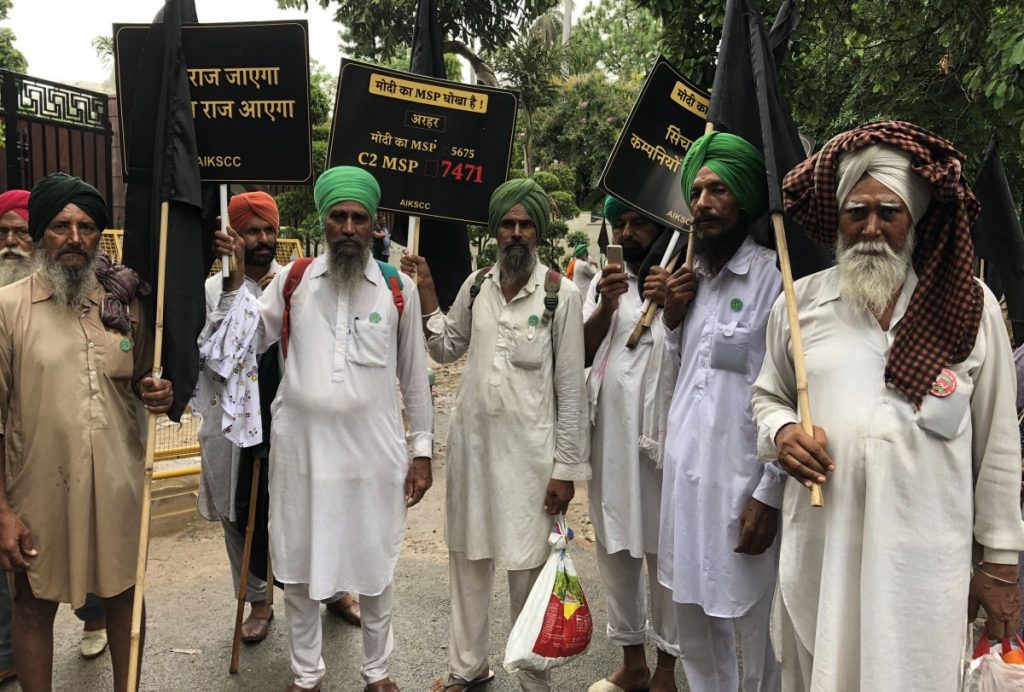 A group of farmers from Faridkot in New Delhi on July 20, 2018, at the protest organised by AIKSCC. Credit: Kabir Agarwal/The Wire

“Hamam mein sab nange hain. Chahe Congress ho ya BJP. Agar hum Modi ke khilaf bolte hain to hum Amarinder ke khilaf bhi bolte hain (Everyone is naked in a bath. Whether it is Congress or the BJP. If we stand against Modi, we also stand against Amarinder),” said 80-year-old Ajeet Singh from Moga in Punjab. “Jab tak zinda hoon, apne hakk ke liye ladunga (I will fight for my rights till I am alive),” Singh said as he walked gingerly with the help of a narrow stick to join the other farmers who had started walking towards the road to begin their march.

Police personnel wearing helmets, carrying fibre shields and fibre lathis – brand new with their plastic covers intact – lined the roads and blocked traffic on the usually busy Barakhamba road. Farmers holding India flags, black flags, red flags, green flags, posters, banners, back-packs, polythene bags began gathering on the road. A group of farmers sitting comfortably outside the massive gate of a palatial house opposite Modern school were the last to get up and join the protestors. 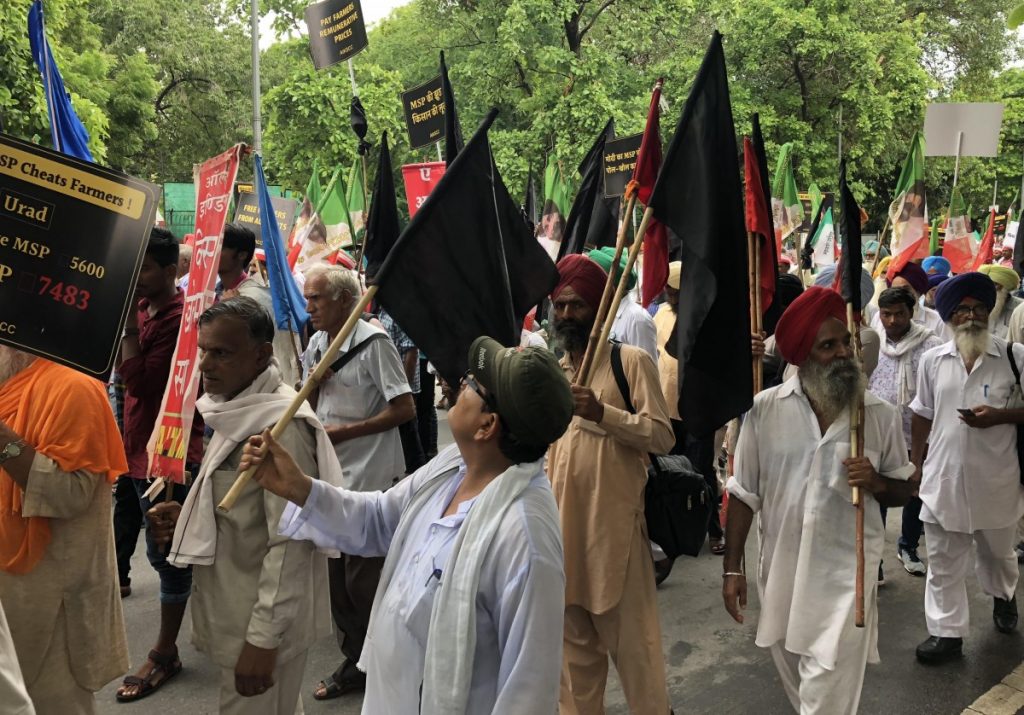 As the farmers began walking on Barakhamba Road, passers-by on motorcycles and in cars stopped to look. One middle aged man on a motorcycle stopped – with little care for traffic behind him – to ask us, “Kya masla ho gaya bhaisahab? (What is the issue?)” Before we could answer, a farmer participating in the protest answered, “Kisan ki loot ho gayi, bhai. (Farmers have been looted, brother).” The farmer introduced himself to us as Satvir Singh from Bahadurgarh in Haryana. He owns five acres of land and recently suffered heavy losses as unseasonal rains wrecked his mustard crop. “All of it was destroyed,” he said. “Didn’t you have crop insurance?” we asked him. Modi government’s flagship Pradhan Mantri Fasal Bima Yojana is supposed to compensate farmers like Singh whose crops are damaged due to unseasonal rains or other such factors outside their control.

“Yes, I did,” Singh responded, his expression turning a little angry. “But the insurance companies refused to pay. They said that the whole village needed to have suffered damage due to the rains and that three or four farmers is not enough. Rs 2,500 was automatically deducted from my loan amount and I did not even get the benefit of crop insurance.”

“I had voted for the BJP in 2014 because I was fed up with the Congress. But, now I have no confidence in this government. They only know how to divide us and tell us who is a Hindu and who is a Muslim,” Singh added.

As the farmers continued to walk towards Sansad marg via Tolstoy road, a group of farmers from Macchra near Meerut in Uttar Pradesh fell behind. One of them has a knee injury and walks with a pronounced limp. “Aaj kuch roz se zyada dard hai pata nahi kyun. (Today, the pain is worse than every day for some reason),” he said, a little embarrassed to have held up everyone.

Each member of the group grows sugarcane, like most farmers in western UP. Everyone in the group has suffered due to delayed payments from sugarcane mills which have mounted to an all-time high of over Rs 12,000 crore in UP alone. Mule Singh, the man with the knee injury, has dues from the Nanglamal sugar mill of Rs 1.5 lakh. “The last payment I received was for February. I have not received payment for three months,” he said. 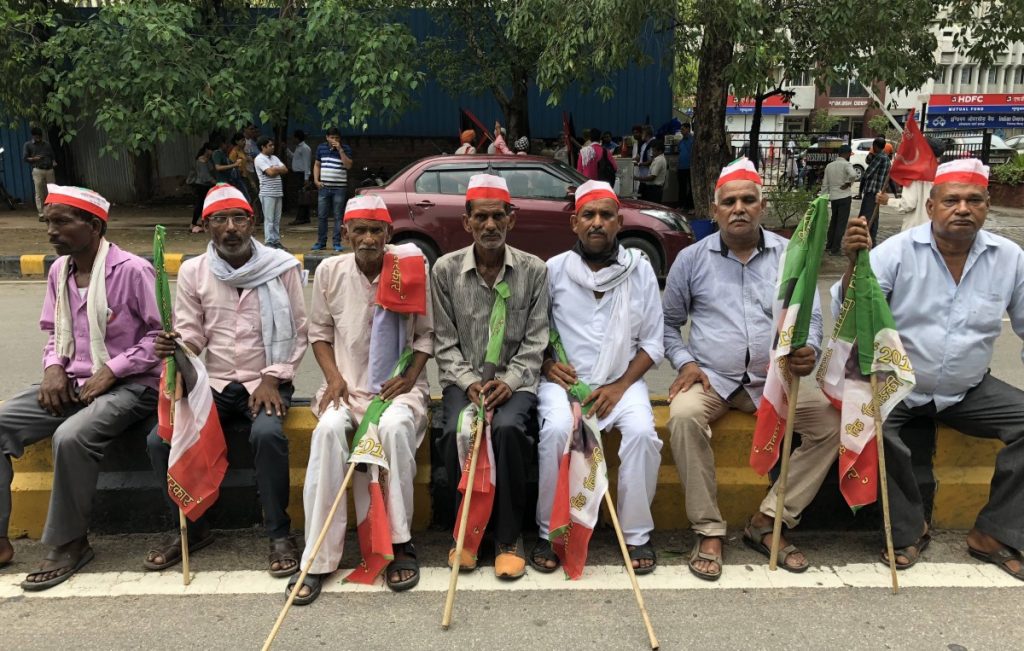 The group from Macchra that was forced to fall behind. Credit: Kabir Agarwal/The Wire

To address the woes of sugarcane farmers, the Centre had recently announced a Rs 7,000 crore package. We asked the farmers if that had helped. “Aji, kuch na. Saara paisa to millon ko de diya (No, nothing. The entire money has been given to sugar mills),” said Singh.

Harvir Singh, another sugarcane farmer from Macchra, expressed his displeasure with sugar mills. “They lie. They claim that they are making losses when they are earning a lot of profits from their other businesses like distilleries,” he said. “The raw material for that also is sugarcane, which is provided by us. Is it not?”

The march was halted by the police near Patel chowk, about a kilometre from parliament. There, a dais was set up and dhurries were rolled out for the farmers to sit.

Among the leaders gathered at the make shift stage were V.M. Singh, president of the Rashtriya Kisan Mazdoor Party; Yogendra Yadav, president of Swaraj India; Medha Patkar, convenor of the National Alliance of People’s Movement; Raju Shetty, MP and leader of the Swabhimani Shetkari Sanghatna in Maharashtra; Sharad Yadav, who recently launched the Loktantrik Janata Dal after breaking away from Nitish Kumar’s Janata Dal (United); Trilok Tyagi of the Rashtriya Lok Dal. 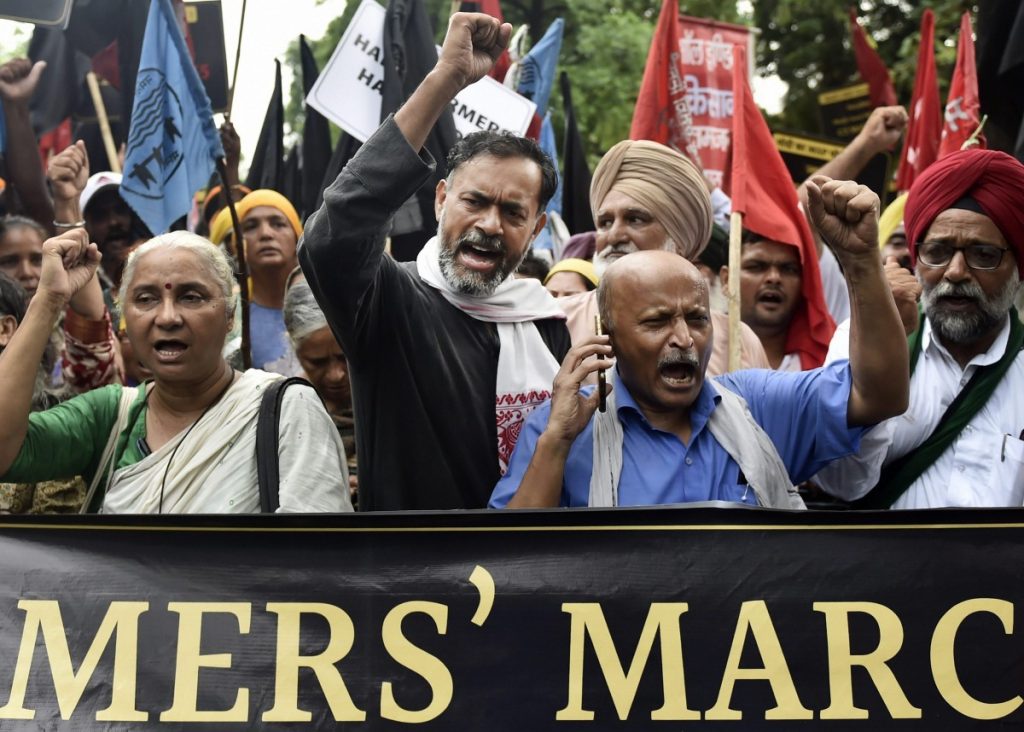 Swaraj India’s Yogendra Yadav and social activist Medha Patkar at the farmers protest against the hike in MSP of certain crops, in New Delhi, on July 20, 2018. CreditL PTI/Ravi Chaudhary

All the speakers accused Modi’s government of ‘duping farmers’ by claiming that the recent MSP hike is historic and in tune with what farmers had been demanding. “We voted Manmohan Singh out because he did not provide 50% over C2. We voted Modi in because he promised to provide that cost. He has duped the farmers of this country by going back on his promise. His MSP increase only gives 50% over the lower cost – A2FL,” said VM Singh.

“If you go to this government with a begging bowl, they will not listen. But, if you go with a stick, then they will drop to their knees. We need to strengthen this movement,” said Raju Shetty. 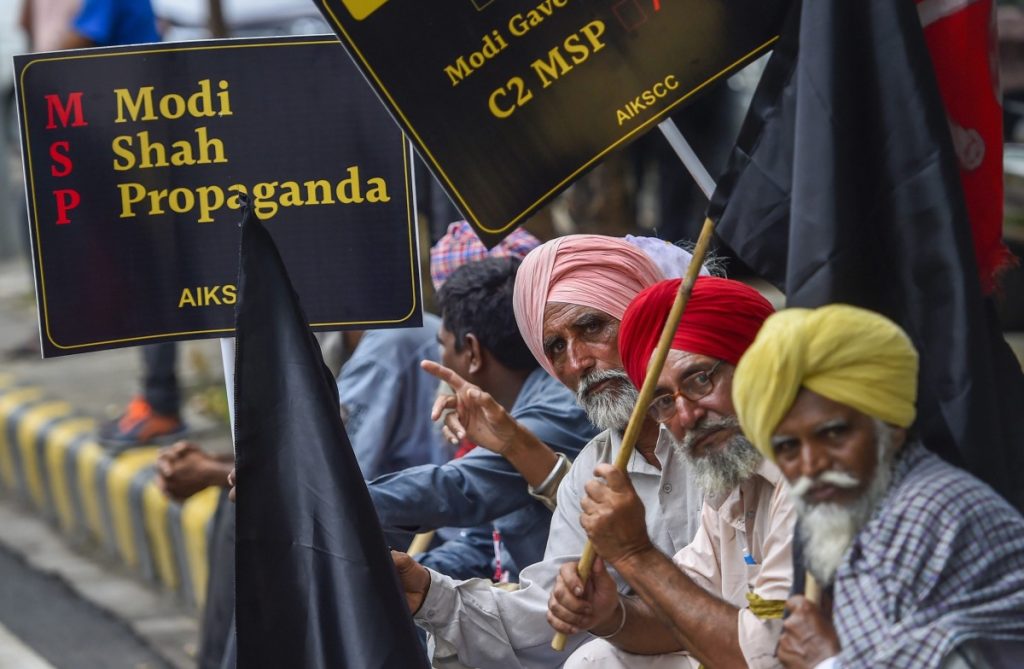 Farms from various states gathered to raise their slogans against the NDA government in New Delhi on July 20, 2018. Credit: PTI/Ravi Choudhary

Yogendra Yadav outlined several promises of the Modi government and how it had failed to live up to them. He then charted the future course of action of the AIKSCC – Kisan mukti bills to be introduced in parliament on August 3, and several protests in the next four months culminating with a ‘Mumbai-like march’ to Delhi on November 30.

“Today is just a trailer. The protests will only intensify. Today, we have passed our own no-confidence motion outside parliament, regardless of what happens inside. Now, we have to make them accountable,” Yadav said.