The disruptions caused by the dharna, which is being conducted by members of the Jamhoori Kisan Sabha, had earlier led to the Adani group to move the Punjab high court in order to find a solution. 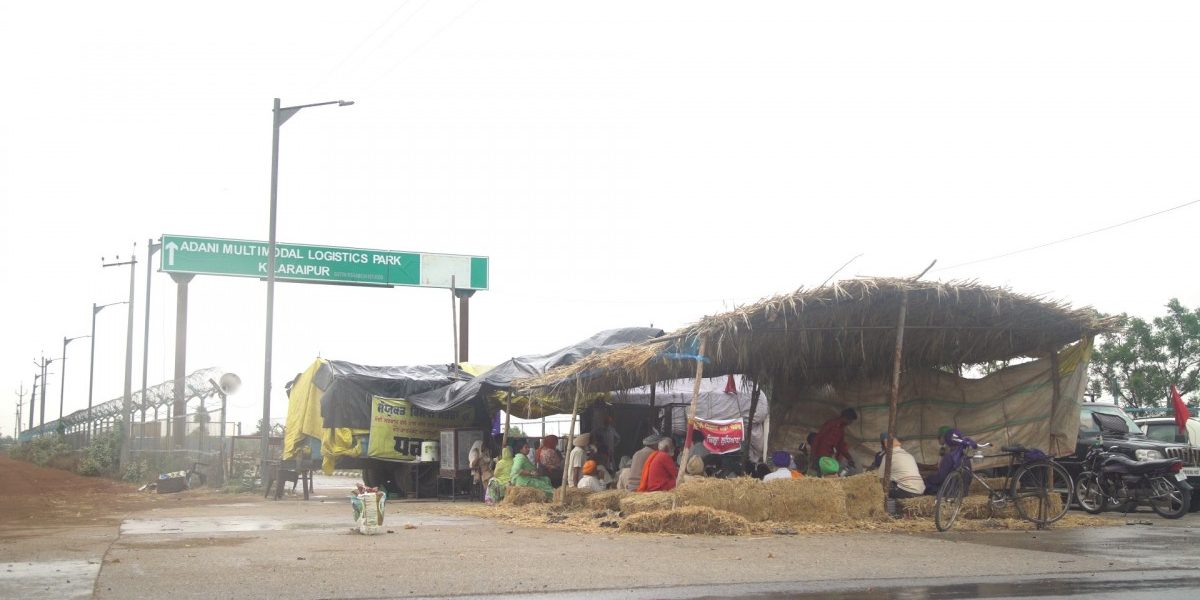 The farmers protest also recognised the growing corporate-political nexus, as seen by this 'dharna' outside the Adani Logistics Park, Kila Raipur. Photo by Aranya Rai Singh

Even as the protests against the farm laws continue nationwide, Punjabi protestors in Kila Raipur are in a celebratory mood for now. Sitting on dharna outside the Adani Logistics Park – or khusk bandargahs (dry ports) as they are locally called – the protestors have been able to challenge a big corporation with only their basic right to protest. Earlier this month, the Adani group filed a petition in the Punjab high court saying it will be shutting down operations at the Kila Raipur multi-modal logistics park after having incurred huge losses due to the dharna. The protestors feel this is a victory.

I visited the dharna at Kila Raipur in April of this year. Camping under a humble shed made with straw were a few protestors (mostly women) from nearby villages. Some were knitting sweaters. Beyond them stretched for acres the Adani Logistics Park. Its gate had been blocked by a trolley from the dharna which was being overseen by Jamhoori Kisan Sabha, Punjab. The weather got chilly – uncharacteristic for the month of April – and it began to rain slightly. Those around me discussed the impact this untimely rain would have on the wheat crop which was in the process of being harvested. The dharna was comparatively smaller and more modest than most around Punjab and these protesters had been sitting there since January.

Instigated by the farm laws, the corporate boycott in Punjab started in September of last year when all the toll plazas were taken over by protesters. Reliance malls, Reliance petrol pumps and the two Adani parks in Kila Raipur and Moga soon followed, along with a mass porting away from Jio sims. These sites now hosted daily dharnas for Kisan Unions where they educated people about the farm laws and their impacts, and celebrated inquilabi (revolutionary) festivals.

When the protestors took over the Adani bandargah in January, there was much hesitation since they were challenging one of the biggest corporations in the country. But by March, the Adani group had moved court, filing a writ petition against the dharna and stating that it hindered the carrying out of their operations. This, they said, was resulting in the company suffering huge losses and they requested the court find a solution.

They had several conversations with the protesters over the coming months, but to no avail. “The local Deputy Superintendent of Police (DSP) also came to threaten us,” Professor Surinder Gill Jaipal said. “We were told that they have ‘other ways’ to make us move if we don’t leave voluntarily because this is a big company we are boycotting. But if we get scared, they will try to threaten us more. Eventually it’s about who is powerful.”

Jaipal believes the movement has made them powerful because of the large number of people fighting together. “Otherwise it wasn’t possible for a few of us to look them in the face and say that the dharna will stay in its place until the farm laws are repealed and they can do what they like,” she added. 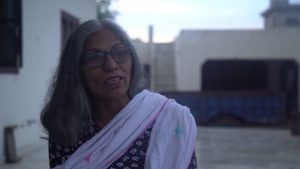 President of the Janwaadi Istri Sabha Punjab and member of Jamhoori Kisan Sabha, Jaipal was one of the women who had been taking turns sleeping at the dharna the night I visited. As we sat on charpais and straw bales – which doubled as tables when food was to be served – I was told that women from nearby villages would be sleeping at the dharna at night for the next couple of weeks while the men were busy in the fields and mandis due to the harvest. That night, the women finished their dinner and began their evening walk and soon, inquilaabi boliyan (traditional Punjabi songs but new ones composed with a revolutionary fervour) followed.

The next day we visited Kila Raipur where the Janwaadi Istri Sabha was conducting a march to mobilise more women to come to the protest site. “These women who come to the site are those who have never left their homes for anything but weddings and funerals. They finish their household chores and then come,” Jaipal said. The simplicity of those present was noticeable. Women played important roles here, like conducting the stage everyday. In March, there was also a women’s tractor march organised from the bandargah where women took turns learning to and eventually riding the tractor. “It was a sight to see; so many women, some with grey hair like me, driving tractors around the area. People stopped and stared at us, almost shocked!” Jaipal laughed. 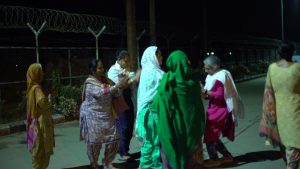 Professor Surinder and the protesting women in a celebratory mood. Photo by Aranya Rai Singh

The Jamhoori Kisan Sabha, like most Kisan Unions in Punjab, is a part of the Samyukt Kisan Morcha (United Farmers Front) under whose banner these protests continue nationwide. The anger against the capitalist policies of the governments runs deep in Punjab. People are fed up with the ever increasing overheads and costs which are making basic survival extremely tough, even as farmers toil, day and night, in the fields. “This is the first time that even a small shop owner or a big shop owner is also a part of a movement. Everyone realises that the issues have now reached their doorstep and fighting is inevitable,” said Jagtar Singh from the Jamhoori Kisan Sabha. “All our jobs are gone, our basic opportunities, our entire livelihoods have all been taken over by corporations,” he continued.

So when the news of the Adani group suspending its operations first reached them, they didn’t react much. “They had a staff of around 40 permanent employees who they asked to not come in this month. A few days later, they came and removed their main board outside,” said Harnek Singh. “Now only the security guards come to work.” 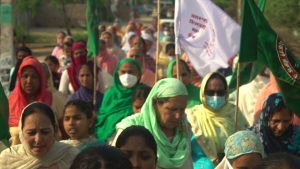 The women of the Janwaadi Istri Sabha Punjab. Photo by Aranya Rai Singh

The  news has also been met with much criticism from many quarters where the protestors have been blamed for letting the economy suffer and for people losing their jobs. “We have repeatedly said that it’s a bigger fight we are fighting and that these corporations can never think of anyone else’s benefit but their own. So any progress that people think is likely to happen due to their presence is an illusion,” Harnek said.

The protestors feel that at least something has come out of protesting against the farm laws for all these months. There is a visible victory. Although the dharna outside the bandargah will continue until the farm laws are repealed, instances like these are important; they reflect the power of democracy and its processes, and that all is not lost. “People definitely feel victorious and motivated and it places our faith back in the democratic process,” Jaipal said.

Novita Singh is an independent filmmaker who has been filming the farmer’s protests for the last eight months.