Farmers Begin Another March to Mumbai as Demands Remain Unfulfilled

The protest comes in the backdrop of the drought that has hit more than half of Maharashtra. 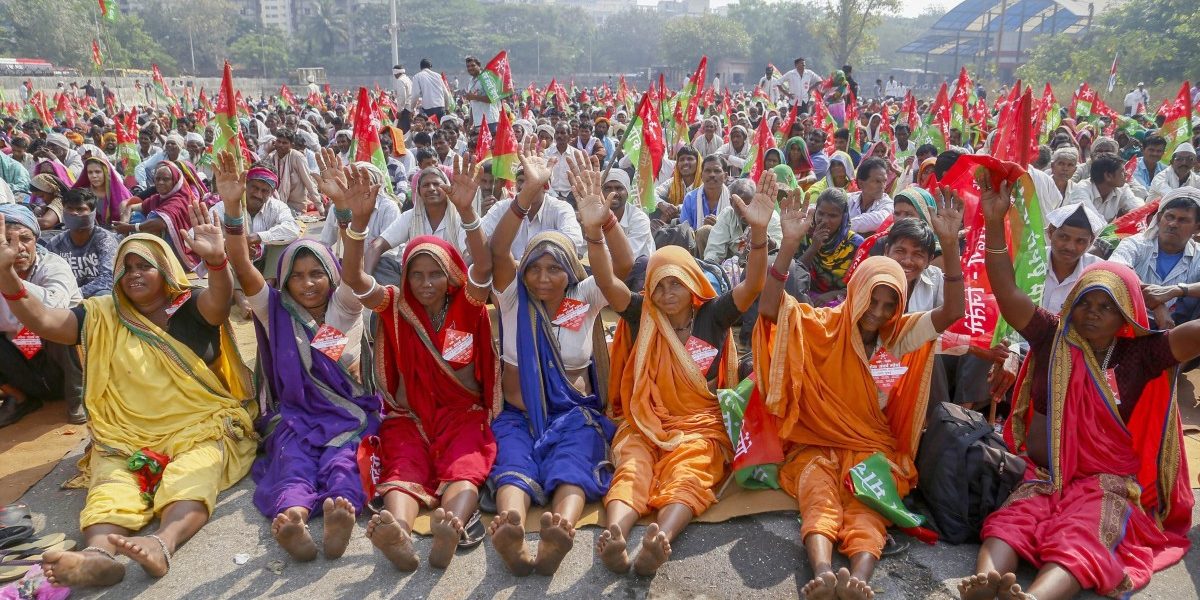 Farmers participate in a two-day protest march from Thane to Mumbai. Credit: PTI

New Delhi: Over 20,000 farmers are participating in a two-day march which began in Thane and will culminate in Mumbai’s Azad maidan on Thursday, NDTV reported. The agitation will continue in the island city’s maidan till the demands of the protesting farmers are met, according to a report in The Week.

The key demands of the farmers are the fulfilment of the promises that were made by chief minster Devendra Fadnavis after the long march from Nasik to Mumbai in March this year.

“We have been consistently asking the state government to fulfil our long-standing demands, but the response has been lukewarm. We are forced to launch this agitation,” Pratibha Shinde, Lok Sangharsh Morcha general secretary which has organised the protest, told India Today.

The demands that remain unfulfilled are a complete loan-waiver, land rights to the tillers, compensation for crop loss, minimum support prices at cost plus 50%.

When the Centre announced MSP this year, it claimed that it had met the demand of farmers and set MSP at cost plus 50%. However, as The Wire has pointed out at the time, the government’s claim was misleading. It had chosen the lower of two costs and set MSP at higher than a 50% return over that cost. The MSPs that were set were thus substantially lower than what farmers had demanded.

But, as The Wire has recently reported, even the MSPs that have been set by the government are not being realised by the farmers. The market price for 10 of the 14 kharif crops were lower than the MSP for October. The average price for moong was 25% lower than the MSP.

Also read: Farmers March to Express No Confidence in Govt, Stopped a Kilometre From Parliament

The average price for five crops was not only lower than this year’s MSP, but also lower than the MSP that had been set last season.

The total loss calculated as price realised minus MSP, was Rs 1,003 crores in October.

Most of these tehsils are in the Vidarbha and Marathwada regions, which have been experiencing scanty rainfall for several seasons. They are also notorious for high rates of farmer suicide.

Also read: Why Tens of Thousands of Maharashtra’s Farmers Are Marching Their Way to Mumbai

For the last two years, the government has shied away from officially publishing the data for the number of farmer suicides in the country.

The drought in Maharashtra is worsening again this year. The Indian Express reported on Wednesday that residents have been forced to migrate to other locations due to the acute shortage of water.

The severe shortage has, for many, ruled out the possibility of sowing in the rabi season and are now migrating in search of economic opportunities elsewhere. Rabi sowing has hit an all time low in the drought hit districts.

The protesting farmers on their way to Mumbai are also demanding drought compensation of Rs 50,000 per acre for non-irrigated lands and Rs 1,00,000 for irrigated lands.

Political parties including the AAP, CPM and the Congress party have extended support for the farmers.

The All India Kisan Sangharsh Coordination Committee (AIKSCC) – a coalition of about 200 farmers’ organisations from across India – has also extended support.

“Unfortunately, I wont be able to go to the protest. But the Lok Sangharsh Morcha is very much part of AIKSCC,” Yogendra Yadav, one of the convenors of the AIKSCC, told The Wire.