Despite paying back Rs 1 lakh of his Rs 2.98 lakh loan, Mangal Chand Meghwal was told he had to deposit Rs 4.59 lakh more. Unable to arrange the money, he committed suicide, but the administration is investigating for the possibility of murder. 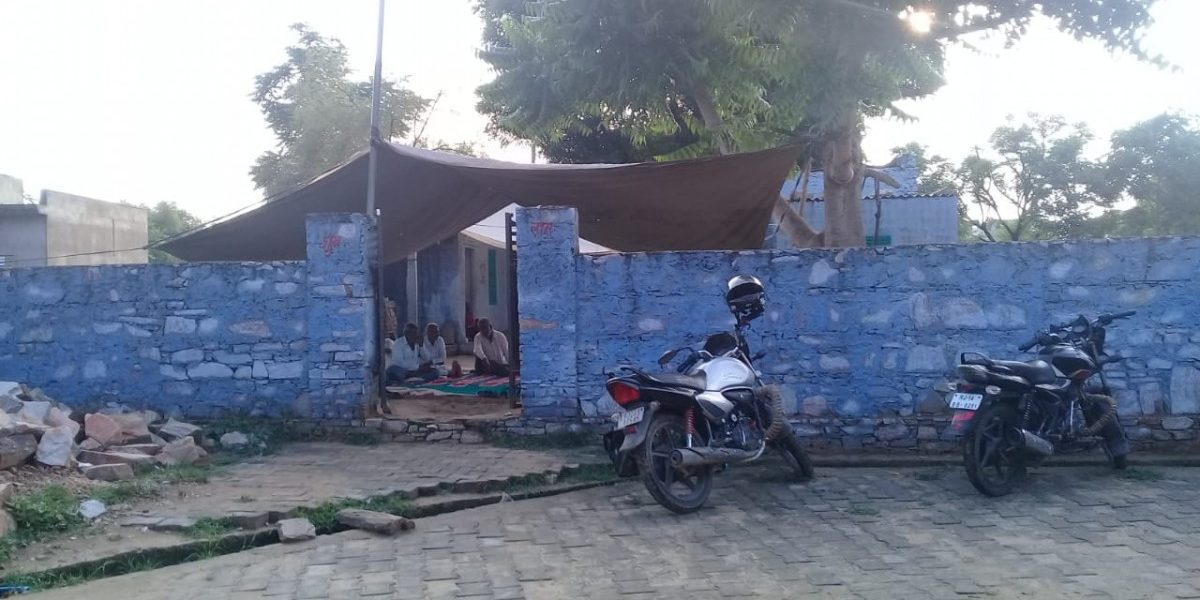 Jaipur: Troubled by mounting debts and a subsequent notice that his land would be auctioned, Mangal Chand Meghwal (36), a Dalit farmer with disabilities from Charanwas village in Rajasthan’s Nagaur, committed suicide by hanging himself from the ceiling fan at his residence late on August 4.

Meghwal and his three brothers, Hardevaram, Prakash Chand and Pooranram, had collectively taken a loan of approximately Rs 2.98 lakh under the Kisan Credit Card (KCC) from the Badalwas branch of Punjab National Bank for agriculture work in 2011. They had repaid Rs 1 lakh last year, but received notices from the bank to repay the remaining amount. “The account was declared NPA in March 2015 due to non-payment,” the notice reads. 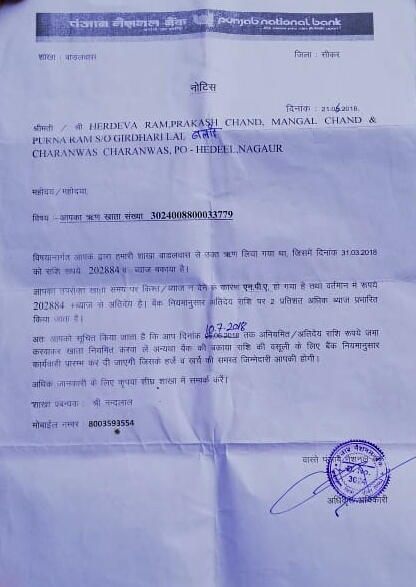 Notice from Punjab National Bank to repay the loan.

Following this, the sub-divisional magistrate issued a warrant last month for the attachment of his farm, allowing the bank to auction it on August 7 under the Rajasthan Agricultural Credit Operations (Removal of Difficulties) Act. Worried by the auction, he went to the bank to enquire about the amount left to be repaid. He was told by the bank manager that Rs 4.59 lakh was still to be paid, failing which his land would be auctioned.

“Mangal Chand was working in his field when the auction was announced over mic on Saturday. He rushed to the bank soon after and asked the manager how a loan of Rs 2.98 lakh had accumulated to Rs 4.59 lakh, when he had already paid Rs 1.75 lakh last year,” Kanaram Bijarniya, sarpanch of the Hudeel gram panchayat, told The Wire.

“The manager threw him out of the bank. He tried to contact few moneylenders in the village that evening, but in vain.”

“He looked stressed when he came home that evening. At around 10 pm, when he didn’t turn up for dinner, we broke the door of his room and saw him hanging from the ceiling fan. His mobile was lying in pieces on the floor. He might have broken it in frustration of not being able to arrange money,” said Rajkumar, Meghwal’s cousin.

The district administration said it would investigate whether it was a case of suicide or murder.

Speaking to The Wire, Ram Sukh Gujar, sub-divisional magistrate of Kuchaman city said, “It’s a matter of investigation whether it was a suicide or murder. We have come to know that he planning to sell two hectares of land and his brother and sister-in-law were upset with him.”

“This auctioning was a routine process. It’s not that every auction materialises; when the bids are not equivalent to the reserved price, the property is not auctioned. In October last year too, Mangal Chand Meghwal’s land was listed for auction but could not be sold,” he added. 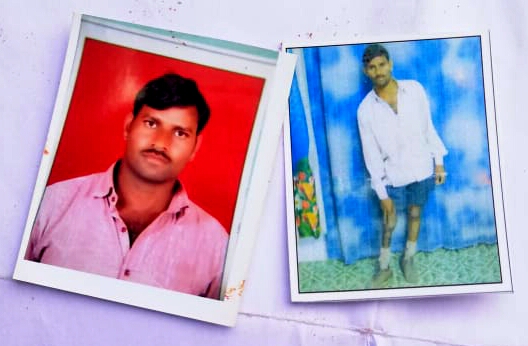 On Thursday, superintendent of police (Nagaur) Harendra Kumar said some people of the farmer’s community met him and handed over the complaint alleging that Manglaram was murdered and it was not a case of suicide.

“I forwarded the complaint to additional SP of Didwana for a probe into the matter. Statements of the complainants will be recorded,” he said.

The family, however, refuted the possibility of murder.

“He was the head of the family and there was no animosity within the family members. Out of the four brothers, only two lived here. Both were disabled and unmarried. The married brothers work abroad and one of their wives stayed at Meghwal’s house,” said his cousin.

“I don’t understand why the administration is cooking up stories about his suicide. Even when we staged a protest following Mangal’s death, the SDM threatened us in front of everyone saying that it a murder and not a suicide.”

Nevertheless, the post-mortem report has cleared the air over Mangal Chand’s death. It revealed death due to ante-mortem hanging.

“Post-mortem report has clearly stated that he died due to hanging,” said Dharampal Singh Meena, SHO of Chitawa police station.

Meanwhile, the farmers have opposed the role of RBI-approved recovery agencies in managing the auction. They allege that in order to earn the 10% commission reserved for them per auction, they resort to threatening poor farmers, which compels them to end their lives.

Amra Ram, a veteran CPI(M) leader from Sikar, told The Wire, “Mangal Chand was forced to repay more than the principal amount due to various strict formalities that exist even on an agricultural loan in the country. Under stress of mounting debt and fear of losing his land, he was compelled to end his life.”

The incident exposes the limitations of the Rajasthan government’s waiver of loans up to Rs 50,000, which was meant only for small and marginal farmers who had defaulted on short-term loans from cooperative banks.

“Since his loan was not from a cooperative bank, he couldn’t avail the limited loan waiver of Rs 50,000 promised by the Vasundhara Raje government. The situation of farmers in Rajasthan is deteriorating each day, but the government is busy campaigning,” said Ram. 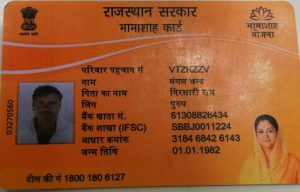 After the protest by the deceased farmer’s family, the bank and administration have made certain promises. “The bank has offered to waive off the interest amount and the administration has promised to employ a woman from the family as an anganwadi worker. A house has also been promised to them under the Pradhan Mantri Awas Yojana, but it remains to be seen if they will come through,” the CPI(M) leader added.

However on Wednesday, Rajasthan Congress chief Sachin Pilot met Meghawal’s family and said that the party would pay the due amount owed to the bank.

The Kisan Credit Card has been hailed by many as an innovative banking product designed bythe  National Bank for Agriculture and Rural Development’s (NABARD) to enable farmers to meet their credit requirements from financial institutions in a timely and hassle-free manner. However, The Wire had earlier reported that it isn’t all that it has been touted to be – tough terms and conditions on the card, from the formalities to credit limit to subvention, have made the agriculture loan non-viable.

“As the date of repayment expires in 365 days, the interest rate becomes 7% if the principal plus interest is within the limit of Rs 3 lakh, and 11% if it crosses the limit,” an employee of the State Bank of India told The Wire.

Shruti Jain is a freelance reporter.