According to farmers' organisations, 48 protesters have passed away due to illness and accidents so far. 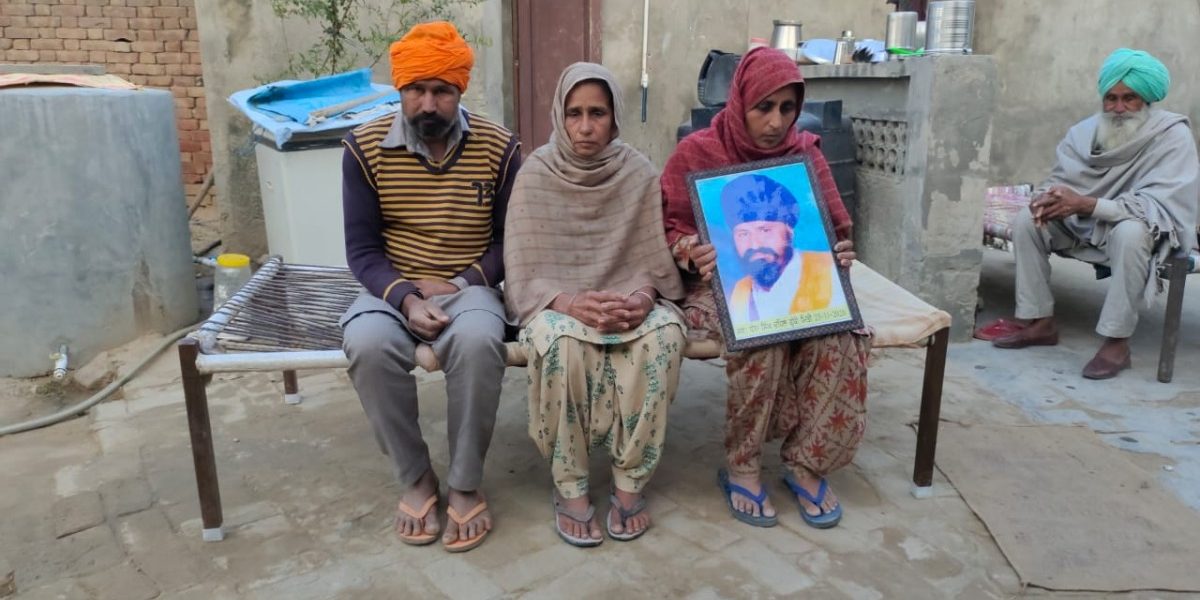 Manjit Kaur (extreme right), wife of Dhanna Singh of village Khayali Chahal in Mansa district who died in a road accident on the way to Delhi on November 27. Photo: Sukhcharan Preet

Chandigarh: The Centre’s new farm laws, and the protests they have triggered, are leaving permanent scars on Punjabi families as the number of protesters losing their lives steadily rises. On December 1, 32-year-old Baljinder Singh, a farmer from Jhammat village in Ludhiana, died in a road accident near Kurukshetra in Haryana while returning from the farmers’ protest in Delhi.

Fellow villagers has called him a ‘martyr’ following his death, but the family is inconsolable. 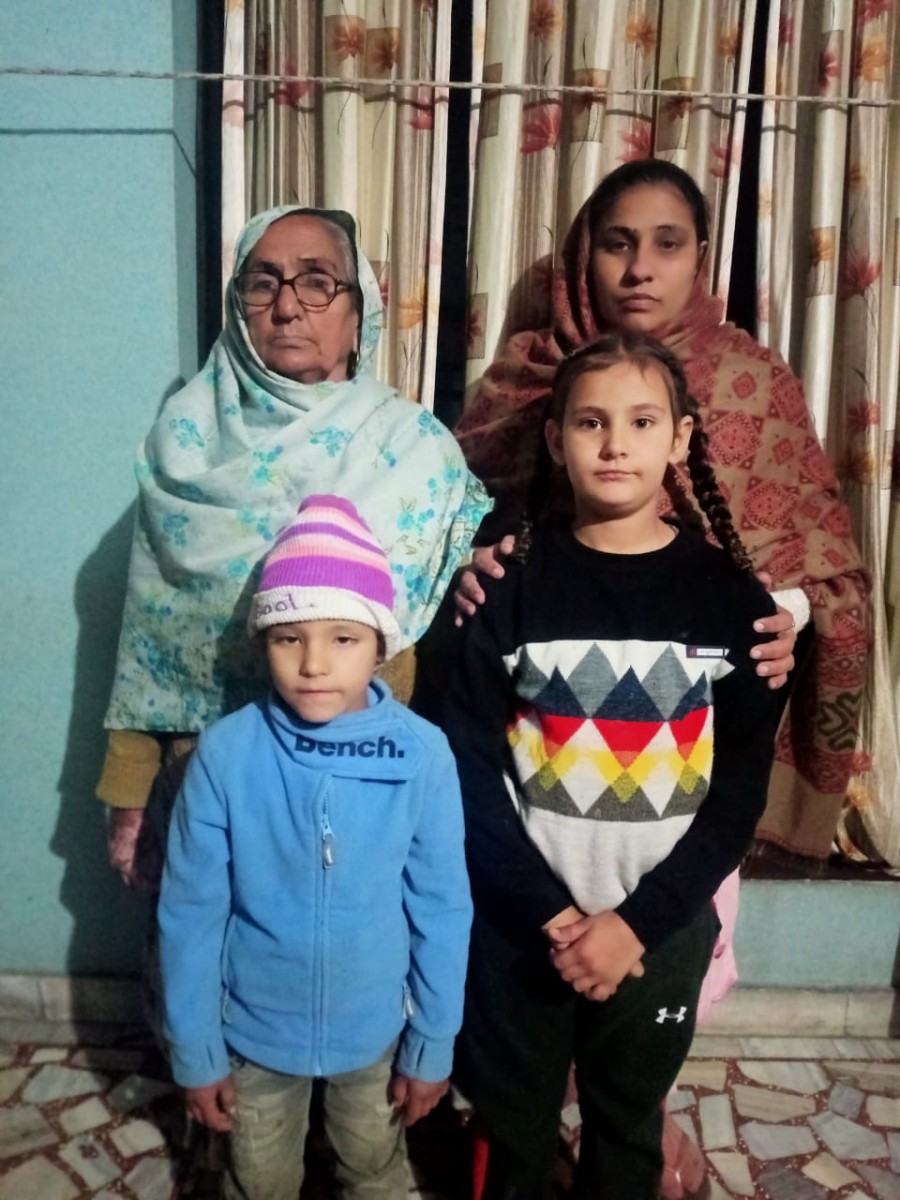 Jasbir Singh, a member of the family, said that three years ago, Baljinder’s mother Charanjit Kaur became a widow. Now, his wife Amandeep Kaur too has lost her husband. Baljinder’s six-year-old daughter Noor and three-year-old son Jaiveer haven’t stopped crying and asking for their father since his death. “Who will now cultivate the farms and take care of the cattle? There is also no government financial support yet,” said Jasbir.

This isn’t the only family facing this fate – stories like this have engulfed the state as tens of thousands of farmers continue to sit on dharna at Delhi borders, trying to get news Acts repealed. As of December 24, 48 farmers from Punjab have lost their lives ever since the farmers’ protests began in the last week of September, reveals data compiled by farmers’ organisations.

“These deaths occurred either due to cardiac arrests or other underlying medical conditions involving mostly aged farmers, or road accidents,” said Bhupinder Singh Longowal, president of the Kirti Kisan Union’s youth wing. Despite the high price farmers are paying, he said, the Centre is not relenting.

The death of 72-year-old Pal Singh from Saholi village in Nabha block, Patiala district earlier this month has left his 102-year-old mother Bachan Kaur devastated. She has already lost five sons and is now left with just one son and an acre of land, said family member Jagbir Singh.

Pal Singh’s son Mandeep Singh said that his grandmother is inconsolable. “While she is still alive, her sons have died one after another in front of her eyes. She often says that her age has become her biggest bane. She is not keeping well after my father’s death,” he said. 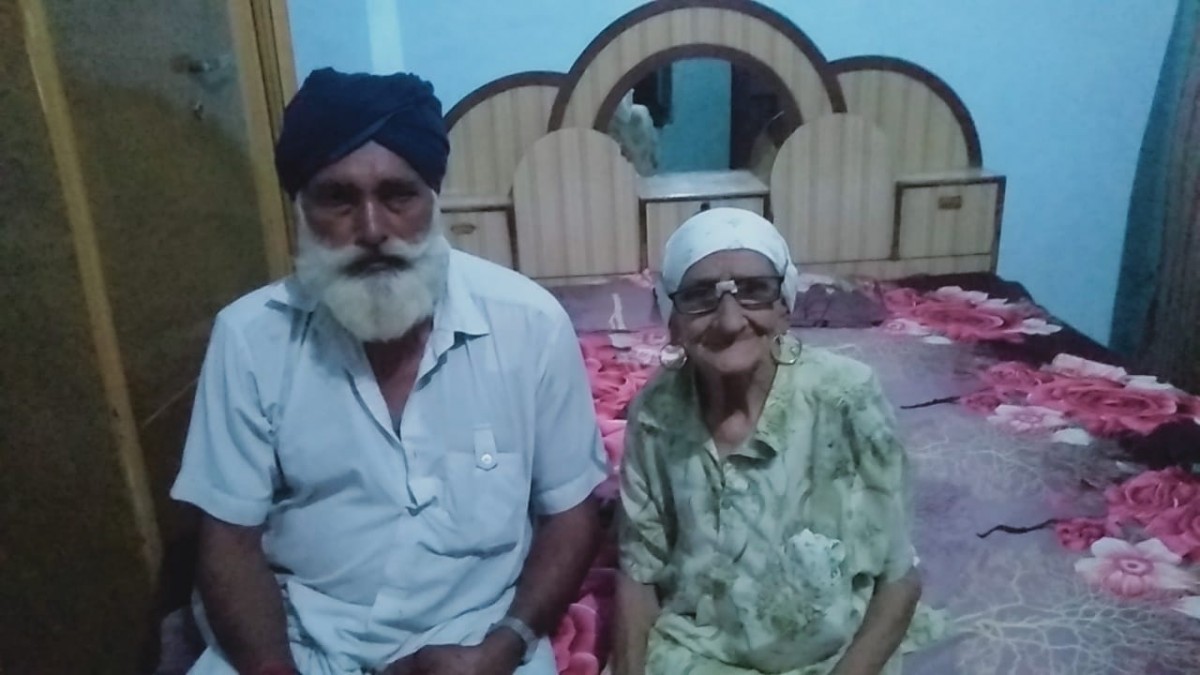 Another one of the deceased’s family members, Laddi, said that Pal Singh died at the Singhu border following a suspected heart attack after he went back to his makeshift night shelter in a tractor-trolley. “The family is poor; they own barely any land. Although the government has given them a cheque for Rs 5 lakh, it is insufficient,” he said.

Jatinder Singh, a young 24-year-old farmer of the Fatta Maluka village in Mansa district, was not aligned with any farmers’ organisation. In order to show solidarity with the protesting farmers, he took his tractor trolley and headed towards Delhi earlier this month, along with a few fellow villagers.

Gursewak Singh, the village sarpanch, said that there was a technical problem with Jatinder’s tractor on the way to Delhi, near Hisar. As he was looking at it, a canter hit his vehicle from behind and a big tyre of the tractor went over Jatinder. He passed away later, in a hospital. He said the family was inconsolable – Jatinder had got married just a month and a half ago. “This was the worst thing that could happen to a newlywed couple,” he added. 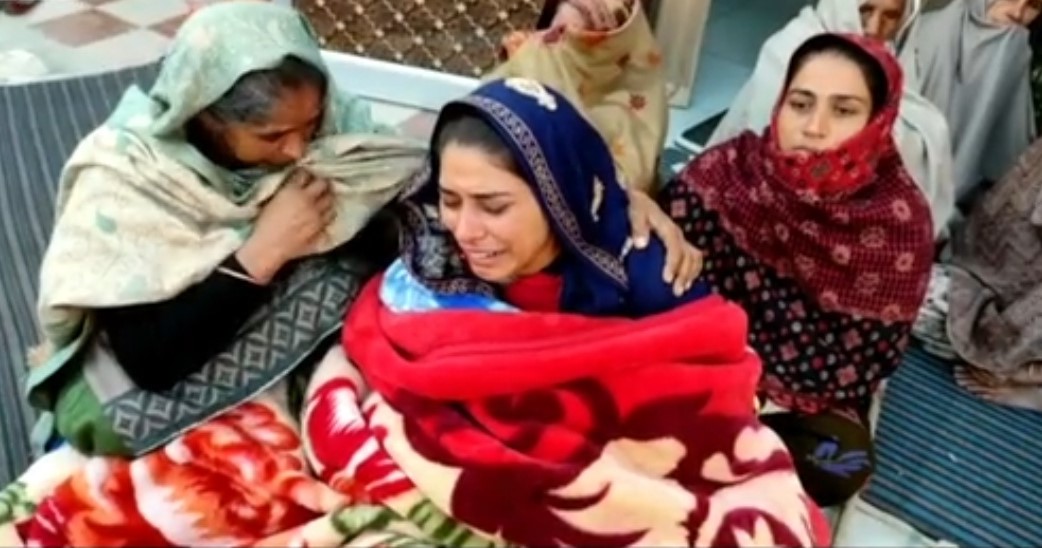 ‘How many more children will the Centre make fatherless?’

“My children have lost their father. How many more children does the Central government want to make fatherless?” asked Manjit Kaur, whose husband Dhanna Singh of village Khayali Chahal in Mansa district died in a road accident on November 27, on his way to Delhi.

She said that her husband would often say that it was important to fight the Central laws, as they would make small farmers into daily wagers if implemented. She has requested the Centre to take back these bills, so that other children don’t see the same tragedy.

Bhag Singh, a 76-year-old farmer from Baddowal village in Ludhiana district, also died due to a cardiac arrest on December 11 at Singhu border. Jaswant Singh, Baddowal village sarpanch, said that Bhag was a spirited man who never missed a kisan morcha (farmers’ rally). His son, Raghubir Singh, said that he was at the Kundli-Singhu border ever since the ‘Dilli Chalo’ rally began on November 26.

“Whenever I called him, he would say that he will only come back after the agricultural laws are repealed. But he could not survive the cold weather,” Raghubir said. “He had some chest pain and uneasiness. By the time he was taken to Rohtak medical college, he had passed away.”

“It is a big loss for the family. He was our guide and mentor. He was active in the fields even at his age. We don’t want his sacrifice to go to waste. Our whole family is ready to join the Delhi dharna to get these laws repealed,” said his daughter-in-law, Kulwinder Kaur.

Gurjant Singh of Bachhoana village in Mansa district too died of cardiac arrest earlier this month, on December 2. His son, Sukhdev Singh, said that his sacrifice should not go waste. “We all must stay here till the time the Centre does not repeal these Acts.” 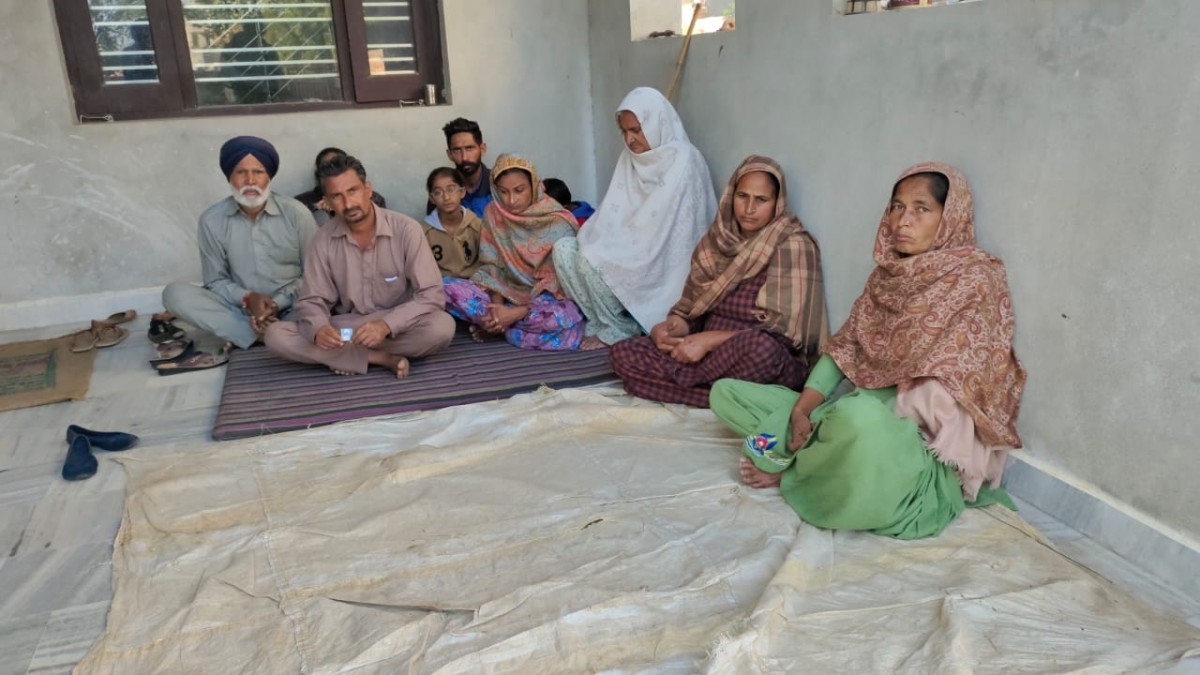 The mourning family of Gurjant Singh of Bachhoana village in Mansa district, who died during the protest at Tikri border on December 2. Photo: Sukhcharan Preet

A few volunteers helping the farmers too have lost their lives. Janak Raj, 55, had a cycle repair shop in Dhanaula village of Punjab’s Barnala district. He used to repair punctured tyres of cars, cycles, scooters and even tractors. He and three other tractor repair mechanics in the area decided to provide their services free of cost to the farmers participating in the ‘Dilli Chalo’ protest.

All of them reached the Tikri border in a car on November 28, to start repairing damaged tractors. 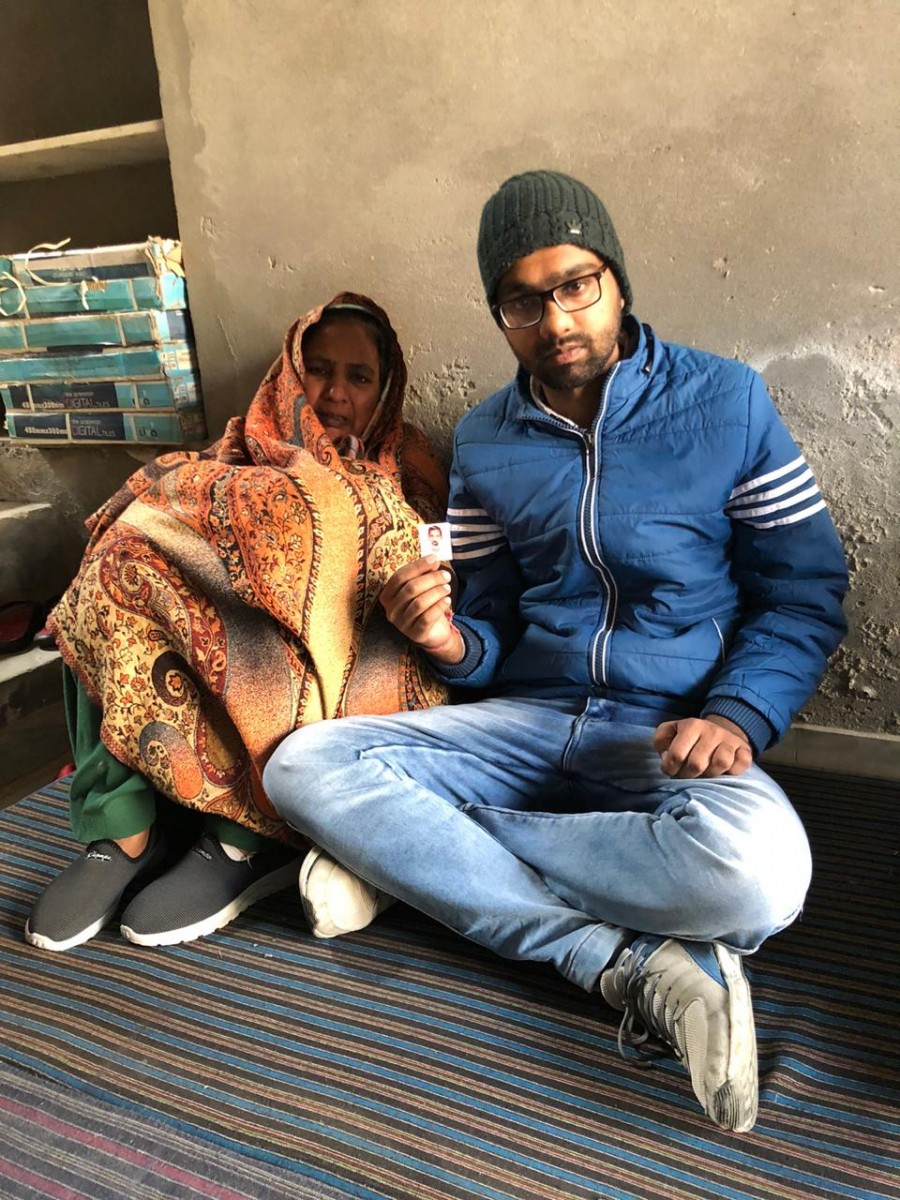 Janak Raj slept in the same car. At around 12:30 am the next day, the car caught fire. Farmers tried their best to save him but couldn’t. His 24-year-old son Sahil Garg, said that his father’s death was a big shock. “He went there as a volunteer to help the farmers. Little did we know that he will not come back,” he said.

In a tweet, Punjab chief minister Amarinder Singh said that he was deeply anguished by the death of farmers during the protests. “The government will provide full monetary and other assistance to their families,” he said.

But farmers’ organisations say that Rs 5 lakh compensation given by the state government is inadequate.

Punjab Kisan Union president Ruldu Singh Mansa said that while the sacrifice of all those farmers who died so far can’t be compensated with money, their family members deserve adequate compensation and that has not been provided to them so far. “We want the government to award at least Rs 10 lakh compensation, a government job to a family member and the complete waiver of debt to all the families who have lost their dear ones in this protest,” he added.

Ruldu Singh said that all farm organisations too have decided that they will also these families after the protests. “The deaths of so many farmers is a great loss to our movement. But we are not going to take a step back. We are determined to fight this out till the time the Centre does not repeal these Acts,” he said.

BKU Ekta-Ugrahan, meanwhile, has started programmes at the village level across the state to pay tribute to the deceased farmers. It is also using these programmes to motivate more people to join the protests in Delhi.

General secretary Sukhdev Kokri said that the government must give adequate compensation to the farmers, or else they will be forced to start parallel morchas in Punjabi cities.