The cashless future that demonetisation promised never came, and many in rural Marathwada scoff at the idea. 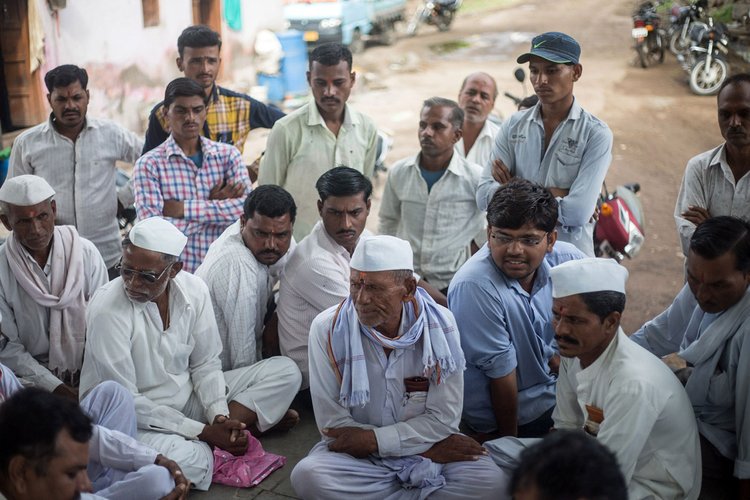 Farmers say the push towards a cashless economy is city-centric, ignoring the majority living in the villages. Credit: Shrirang Swarge/PARI

Aurangabad: Ten months after currency notes of Rs 500 and Rs 1,000 were scrapped on November 8 last year, the ghost of demonetisation continues to haunt Deepak Badavne.

In early November, Badavne had harvested 31 quintals of cotton from his 2.5 acre farm. He expected good returns on it. “The trader arranged for the truck and loaded the cotton from my house,” he says. But just then, the demonetisation-induced cash crunch hit the farm sector. The payment for Deepak’s cotton didn’t materialise. ‘The trader is now saying he will pay by Diwali [by mid-October 2017],” he says.

The trader owes Badavne Rs 178,483 for his cotton yield. A cheque he received for this amount on March 24 bounced – thrice.  “I am not the only one,” says Deepak, 31, sitting under a tree in Karajgaon village on the outskirts of Aurangabad city in Marathwada, Maharashtra. “There are others in my village who have been similarly duped.”

Badavne, who lives in a joint family and has two children, has gathered some of them in this village of 1,300 people – people who are also waiting for their dues or have received cheques that bounced. In April, nearly six months after the demonetisation, Deepak’s brother Jeetendra, 38, got a nearly two lakh rupees for 34 quintals of cotton. That too bounced. “What am I supposed to do with this if I cannot have cash in hand?” he asks. “I need cash to buy inputs for the cropping season [that started in mid-June].”

On the morning of our visit in June, the trader in question had left the village to avoid reporters. So he was unavailable to give his version of the events, and is therefore not named in this story. 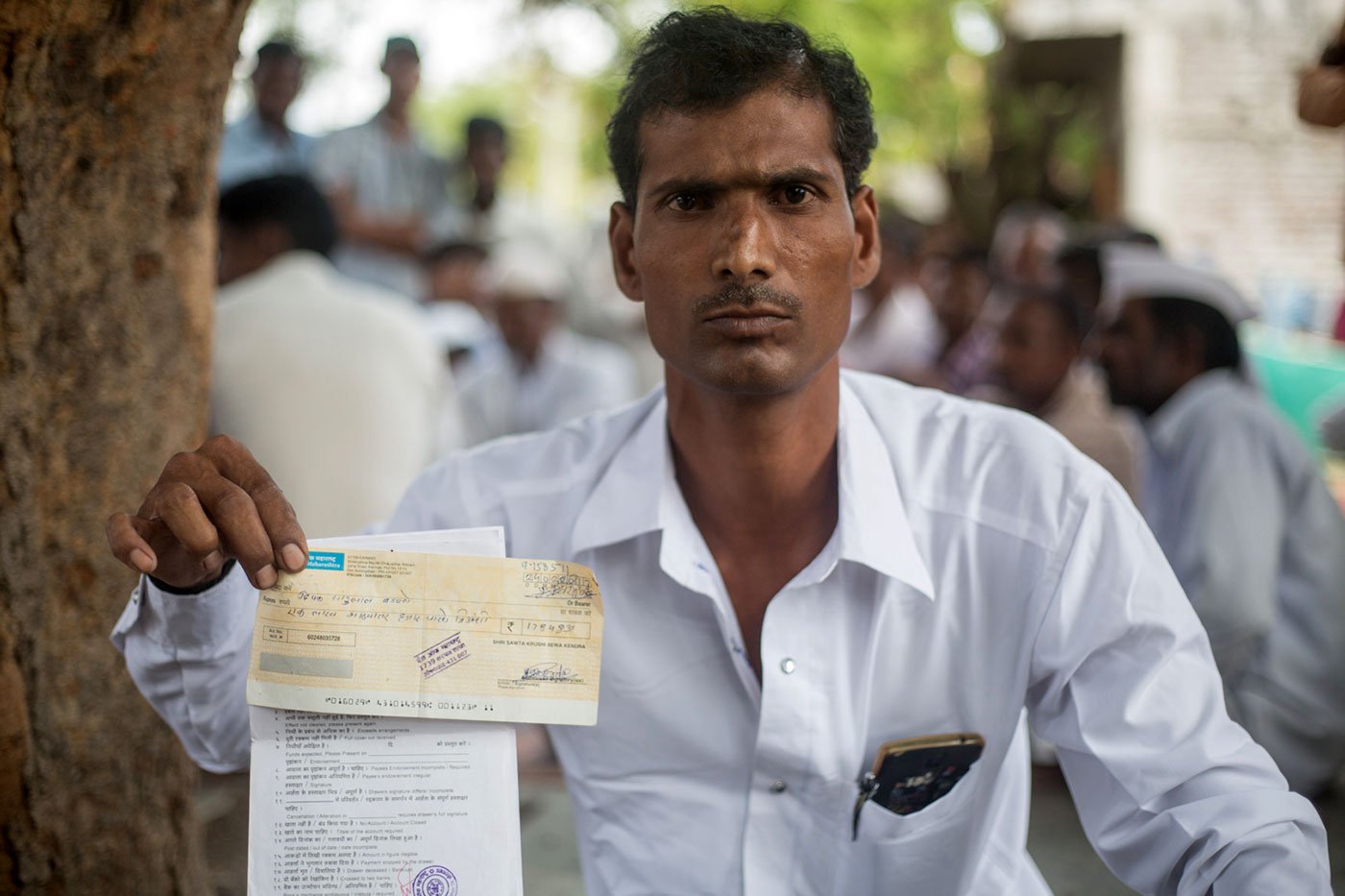 Deepak Badavne holds up the cheque he received in return for his cotton – it bounced three times. Credit: Shrirang Swarge/PARI

When the angry group barged into his house, his mother threatened that they would be responsible if her son committed suicide. “The trader said the cash crunch was responsible for the delays in payment,” says Deepak, “but the sowing season does not wait for us. We have filed an FIR [at the Karmad police station, around four kilometres away, on charges of cheating].”

In Hasanabadwadi village on the Aurangabad-Jalna highway, Atul Antarai, 28, was also struggling in June, months after the demonetisation. He has 1,000 mosambi trees on five acres. “I have a private well and borewell,” he says, “so I manage to water the orchard better than many farmers cultivating mosambi around me.”

In the first week of November, a trader had approached Antarai and offered him Rs. 6.5 lakhs for the entire produce. “I had planned on harvesting around February,” he says. “And going by the rate of Rs 30-35 per kilo, I expected to make Rs. 10 lakhs from the crop. I told the trader I would get back to him.”

On November 8, however, after the government’s ‘notebandi’ order, the same trader did not have the cash anymore, and rates plummeted. “I eventually got Rs 1.25 lakh for the entire yield,” says Atul. “Where I had expected Rs 30-35 a kilo, I ended up selling the fruit at Rs 3 a kilo.”

Every year, the transactions for crops in Marathwada are made in cash. Relatively larger amounts than those for food crops get exchanged for cotton and mosambi – so after the demonetisation, when cash was in short supply, the impact on cotton and mosambi farmers was especially severe. November is when Marathwada’s farmers harvest cotton, and it’s just a few months before the year’s first mosambi harvest of February-March (the second one is usually in August-September).

The rates plummeted and traders did not have cash to buy stock from farmers. The cashless future that demonetisation promised never came, and many in rural Marathwada scoff at the idea. “ATMs are concentrated in cities,” says Ashok Yedhe, a farmer in Anjanvati village of Beed district, who cultivates soyabean and jowar. “Just to get to a bank or an ATM takes kilometres of travel for us.”

ATMs in rural areas are few and far between.  Of the 222,762 ATMs in the entire country, according to Reserve Bank of India (RBI) data (till June 2017) only 40,997 are in rural centres – this means less than 20 per cent of the ATMs in India are available for the 69 per cent of the population that is classified as rural (by Census 2011).

Devidas Tuljapurkar, joint secretary of the All India Bank Employees Association, points out that it is also important to note the run time of ATMs. “In cities, the cash is replenished almost every day,” he says. “That is not the case in rural areas, where the run time of ATMs is about 20 per cent what it is in cities.”

Besides, Yedhe points out, online transactions cost more, and a farmer cannot afford to pay extra money for every such transaction. In any case, he explains, cash is central to any transaction in a rural economy. “We cannot Paytm 250 rupees to an agriculture labourer,” he laughs. “Most of the time, a farmer gets cash and uses it immediately to buy inputs or rations or fodder. The entire trade chain in rural India is cash-based.”

To add to the cash crunch after November 2016, banks in rural areas were the last to get the new currency notes. For months, the RBI did not even accept the old notes deposited with the district cooperative banks, where most farmers have their accounts. Hanumant Jadhav, managing director of the Latur District Cooperative Bank, says, “For 7-8 months we continued to struggle, when district banks were not remonetised and all our ATMs were dry.”

In Karajgaon too, farmers say the push towards a cashless economy is city-centric, ignoring the majority living in the villages. “We usually use cash the same day we get it from any source,” says Deepak. “If we start going to the bank to withdraw cash for each transaction, can you imagine the amount of money and time we would be spending? Cashless sounds fine in Mumbai and Delhi, but it is a farce in rural India.”

Deepak has been unable to repay the 2016-17 agricultural season’s bank loan. “I owe the Bank of Maharashtra in Karmad Rs. 1.5 lakhs,” he says. “I have been repaying every  year, so I am eligible for a new crop loan. But this year, I have been a defaulter.”

And in Hasanabadwadi village, Atul is wondering if he will have to phase out his mosambi orchard. “The well has run dry. Rainfall has not been great. The harvest [the year’s second, of August-September] could be mediocre. And because I lost a lot of money after demonetisation, it is difficult to purchase water to keep the plants alive.”

Parth M.N. is a 2017 PARI Fellow. He is a special correspondent for India with the Los Angeles Times and freelances at various online portals.

This article was originally published on the People’s Archives of Rural India (PARI) on September 15, 2017.