To Benefit Farmers and Not Private Insurers, the Crop Insurance Scheme Must Be Overhauled Completely

As it stands now, farmers have very little to gain from having their crop insured, while private insurance companies are raking in the profits.

I was never in doubt. The flagship programme launched with much fanfare – the Pradhan Mantri Fasal Bima Yojana (PMFBY) – has turned out to be, at best, a profit insurance scheme for private insurance companies. There is certainly no business as profitable as crop insurance.

Instead of paying Rs 14,349 crore as profit to the insurance companies for the crop year 2016-17, I wonder why didn’t the government instead use the entire amount as disaster relief for farmer. This is primarily because the PMFBY is basically designed to help private companies. The government either did not visualise the serious problems in its implementation and the way the scheme was designed, or probably had too much of faith in private insurance companies. The comptroller and auditor general has already pointed to several discrepancies, but let’s also look at some of the structural problems in the very basic design of crop insurance.

The biggest fault, of course, lies in the way the average loss is worked out. In the past, the average loss computed in a block or taluka was considered while assessing the crop loss suffered by a farmer. In the PMFBY too, a village or a village panchayat has been taken as the unit of insurance. It means that irrespective of the loss an individual farmer suffers – say from a hailstorm or strong winds – the compensation she will get will be based on the average loss in crop production in a village. This is primarily the reason why farmers were never enthused to take up crop insurance.

I have always questioned this faulty methodology. Consider this: if a house in a residential colony catches fire, the owner gets the claim he filed for. Why shouldn’t the same methodology work in the farming sector? After all, 60% of the total insurance is done in 50 risk-prone districts across the country. Given that 11 insurance companies are in the business, I see no reason why these companies cannot be directed to assess loss on a per unit farm basis. In these 50 districts to begin with, each company can map each and every farm in five villages each. Why the insurance companies are not being directed to pay the insurance claims based on each farm is baffling indeed.

As if this is not enough, the best way to ensure profits for the companies irrespective of the extent of crop losses is to keep the sum insured at a minimal level. Given that the loss assessment is based on the average loss incurred in a village, if the sum insured is lower than the threshold levels, it is quite obvious that the claimant will get only a fraction of what his loss is. Now, this is a little complex. So let me illustrate how the companies ensure that either they don’t have to pay at all or have to pay a bare minimum for the losses the farmers suffer.

Take the case of Bundli district in Rajasthan. According to a study conducted by the Centre for Science and Environment (CSE), for soybean crop the farmers were insured to a maximum of Rs 16,539 per hectare against a maximum output value of Rs 50,000. Similarly for paddy, the sum insured was Rs 17,096 against the expected value of her output from a hectare being Rs 65,000. In the Beed district of Maharashtra, against the cost of cultivation worked out at Rs 34,147 per hectare in 2015-16 by the Maharashtra State Agricultural Prices Commission, the sum insured was a maximum of Rs 18,000 per hectare. Which means even if the loss a farmer incurs is more than 50%, she will hardly get any compensation.

For the kharif 2016 season, a civil society group – Abhinav Rajasthan – in an interesting investigation showed that the maximum claim that was applicable in moong had been worked out to Rs 16,130, which is roughly 40% of the total value of the crop. Accordingly, if we look at the estimates prepared by the State Agriculture Department, seven quintals is the average output of moong per hectare. Going by the minimum support price for moong, the total output in terms of value comes to about Rs 40,000 per hectare.  But what a farmer could insure was not more than for Rs 16,130 per hectare.

Keeping the sum insured deliberately low provides profit security to the insurance companies. As the CSE study shows, at 90% indemnity level for soybean crop, the claim amount would be just 25% of the cost of production. For paddy, it would have been 25%.

Further, I find the crop losses and claims that are being worked out are based on open bidding. The premium limits quoted by the private companies are actually not based on risk-based premiums but simply based on their commercial gains. This shouldn’t have been allowed in the first instance. Nowhere in the world is this allowed. Crop insurance companies cannot get into an open bidding process so as to select areas where they would like to operate. This clearly shows that the government’s intention is to provide an open field to the private sector companies to maximise their profits without any accountability. 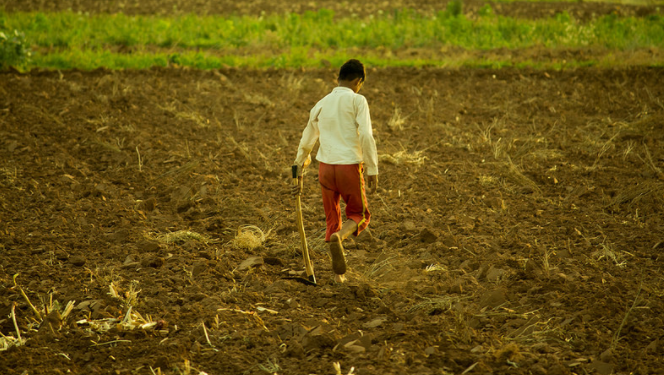 Insurance claims are set in a way that benefit the company, but not the farmer. Credit: me_yogeshtak/Flickr CC BY 2.0

Take Rajasthan, for instance. News reports say Rajasthan will have to provide roughly 35% of its agricultural budget to implement PMFBY. This is because the insurance companies are quoting a higher premium and the government has no mechanism to force them to reduce it.