From problems such as storing the fruit to falling demand, several issues across the Supply chain have thrown the industry into turmoil. 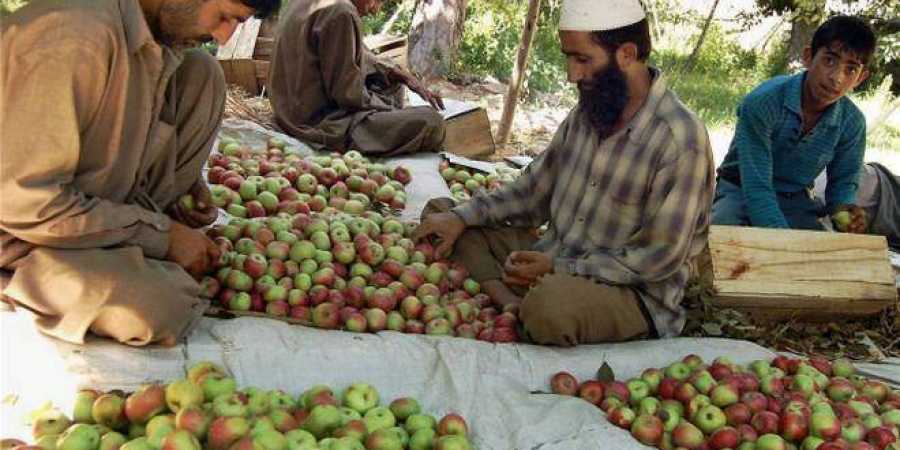 “Dear Kashmir buy Kashmir apples only to support apple industry” tweeted Nayeema Mehjoor, a senior journalist on April 28. This Ramadan, a vigorous social media campaign in Kashmir, with the hashtag #BuyKashmiriApples, has been asking people to buy locally-grown apples instead of fruits imported from other states of India. The campaign aims to provide some support to the apple industry, which has fallen on hard times. Usually, people in Kashmir consume watermelons and dates at iftar.

After the dilution of Article 370 in August 2019, and the subsequent lockdown, several apple growers and businessman had stored their harvest from last autumn in the hope of receiving better rates this spring. However, their hopes were dashed when the COVID-19 pandemic gripped the world. Nawaz Ahmad Sheikh, a 59-year-old from Memander village in Shopian is going through harsh times. Last year, Sheikh put one thousand boxes of apples in controlled atmosphere storage (CAS) at Lassipora in Pulwama. “Every month I have to pay Rs 40 per box as charges for retaining the texture and the taste of the stored apples,” said Sheikh. “For the past seven months, I have to pay roughly Rs 300 per box. What I will receive in return is so meagre that I will face great losses,” said Sheikh in a dejected voice.

Mohammad Ramzan Bhat (47) is from Pinjoora in Shopian, the district which is famous as the apple bowl of Kashmir. He had stored 2,000 boxes of apples at Lassipora. “Earlier it was curfews and shutdowns after the dilution of Article 370 that disrupted our trade and now it is the coronavirus,” said Bhat.

In the second week of March, Mohammad Yousuf Lone, 58, from Manzipora in Shopian had sold his cold-stored apples to a trader from Yaripora. As the coronavirus began to grip India, the trader refused to pick up the boxes, arguing that if he did so, he would face losses.

There were instances like this in the past too. “Last year, our buyers left the produce midway and we had to beg them to buy our harvest, even at minimal rates, so that the apples don’t rot,” said Irshad Mir of Goshbugh Pattan of Baramulla district.

After the Centre announced a lockdown on March 24 to contain the spread of the coronavirus in India, fruit growers in Kashmir have become apprehensive. “If the situation persists, who will buy our apples later in the year?” asks Abdul Salam Dar, an apple grower from Yaripora in Kulgam, which is 60 km from Srinagar. “We invest both money and energy into our apple orchards and when the outcome is going to be minimal, it is better to cut spending,” he says.

Reduced use of fungicide

The lockdown has also forced apple growers to reduce the number of times fungicide and other chemicals are sprayed. Farooq Ahmad Reshie, who has been a fungicide dealer for the past 20 years in Bogund of Kulgam, says he has a huge stock of fungicide that has not been sold. Reshie said, “Now anyone who purchases the spray prefers the cheaper fungicides rather than the ones advised by the department of horticulture. This is bound to affect the quality of the fruit,” Reshie said.

Hussain, another fungicide trader in Kulgam, says apple growers are now relying on traditional and cheap fungicides like Dithane M45, Contaf Plus instead of Cabrio Top, Merivon, which would have protected the fruit from all kinds of fungi and insects. Because of the economic impact of the COVID-19 lockdown, people are thinking twice before spending money, he says. “Apple growers are scared and are trying to save money for their basic necessities,” said Hussain.

Dar Adil, an apple businessman from Kulgam, agrees with Hussain. “We are yet to recover from the losses of last year, and purchasing expensive fertilizers and fungicides amid this pandemic will take us nowhere,” he said

Mohd Iqbal Zargar, a professor at the Boys Degree College in Anantnag, says that during the pandemic, most people are finding it difficult to eat two meals a day. “Apple growers are reluctant to invest huge sums into the orchard when the future seems so uncertain,” he remarked. Crucial to the economy

The apple industry is crucial to Kashmir’s economy. The Valley produces around 75% of the country’s apples and horticulture is a source of livelihood for around 33 lakh people in Jammu and Kashmir. About 7 lakh families are directly or indirectly dependent on it. According to government officials, Kashmir exports around 20 lakh metric tons of apples every year.

For the past couple of years, the apple industry has been facing losses worth crores of rupees. The adverse effects of climatic change have seen growers battle persistent rainfall in March and April, sudden snowfall (such as in November 2019), hail storm and winds.

The political circumstances after the revocation of Jammu and Kashmir’s special status also badly affected the apple growers of the Valley. Due to the complete shutdown, the transportation industry and procurement market were disrupted, making it difficult for stakeholders to harvest and store the fruit. The communication shutdown also meant that apple growers, transporters and traders could not contact each other, disrupting the demand-supply chain. This caused delays, inconveniences and additional costs.

Though New Delhi took the initiative to procure apples in Kashmir, through cooperative the National Agricultural Cooperative Marketing Federation (NAFED), most growers stayed away. “There was too much delay in the release of payment and only people with contacts were able to sell their harvest through NAFED,” alleged Mohd Ismail Khan, a fruit grower from Yaripora.

‘The supply chain is too long’

“The problem with the apple industry in Kashmir is that everyone benefits from it, except the one who grows it,” said Sami Khan of Warpora Pattan of Baramulla district. “From the apple orchard to the mandi, the supply chain is too long, thus reducing the profits of apple growers”, said Nazir Cheksari of Pattan.

Harvesting starts with picking of apples followed by transporting them to sheds for grading and finally to the market for sale. “It is a tedious process and a lot of produce gets wasted during this time,” said Ghulam Nabi Dar, a fruit grower of Sonigama in Kulgam. The only lifeline is the Jammu-Srinagar national highway, which is weather dependent. For Gulzar Ahmad Mir, it took fourteen days to take his apple boxes to Azadpur mandi in Delhi from Sopore. 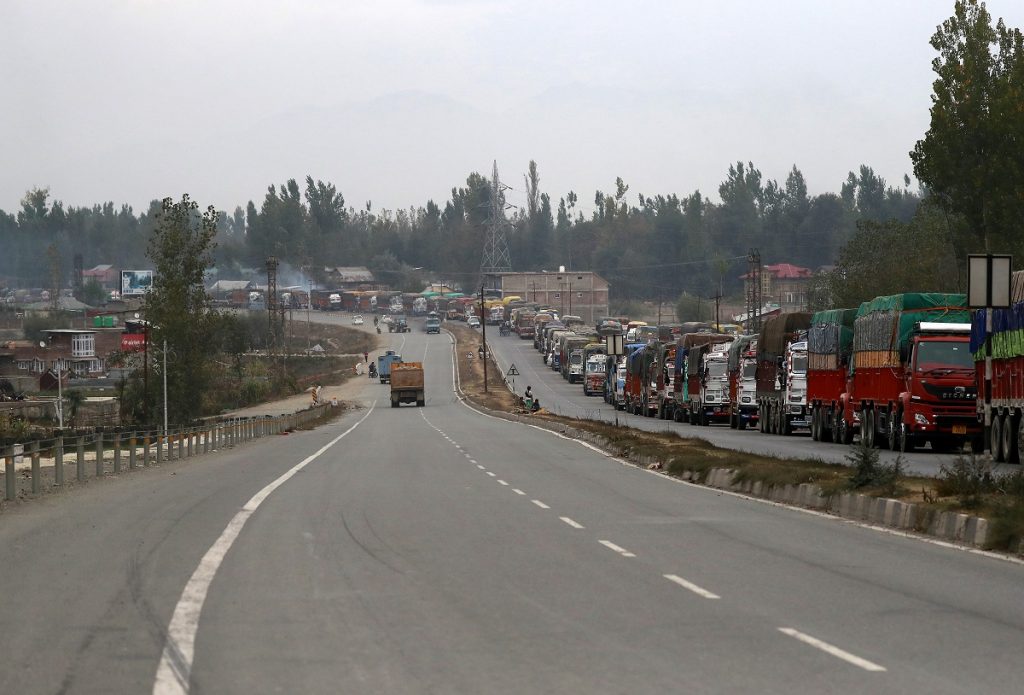 “Last year, everyone associated with the apple industry was badly affected,” said Mubarak Ahmad, a businessman from Harmain in Shopian. “The coronavirus is a new challenge for us and if it stretches for two more months, we will face tremendous losses,” said Bashir Ahmad Dar, an apple trader from Cheque Ashmuji of Kulgam.

Junaid Ahmad Bhat, a researcher in agricultural sciences, said that small apple growers are facing larger problems. He pointed out that if this problem is not “nipped in the bud, I am afraid farmer suicides may also happen in the Valley like the rest of India”.

Ghulam Nabi Bhat, a seasoned fruit grower from Sopore, suggested that fixing the fare charged by truck drivers could help reduce costs. “The cost of transporting apples to Delhi during the peak season skyrockets and the government should ensure that apple growers can send their harvest at affordable prices,” Bhat said.

“There is a nexus between pesticide dealers and companies and this also affects the growers in Kashmir,” said Nazir Ahmed of Kunzer Tangmarg. Sometimes, the dealers deliberately sell expired pesticides and fungicides to growers, said Bashir Ahmad Bhat of Ajas Bandipora. To check the duplicity of fungicide, there should be repeated inspections from the horticultural officers he said.

Nazir Ahmad Rather, a retired teacher, who is in his early 70s, asked why the government is reluctant to open the Muzaffarabad route. “Our produce is world-class, but the government is hellbent on destroying this booming industry,” added Rather.

The political circumstances, sorry state of the national highway, fewer cold storage places and above all, the COVID-19 pandemic are adding to the miseries of fruit growers in the Valley.

Muneeb Yousuf is a researcher and journalist based in Kashmir. Javid Majid is a research scholar working on the agrarian crisis in India. Shazia Farooq is a postgraduate student at the Nelson Mandela Centre for Peace and Conflict Resolution.