Climate Chaos in Kashmir Could Change the Colour of Our Kheer, and a Whole Lot More

People employed in Kashmir's agriculture sector detail first hand the havoc that climate change is wreaking upon their crops, lives and livelihoods. 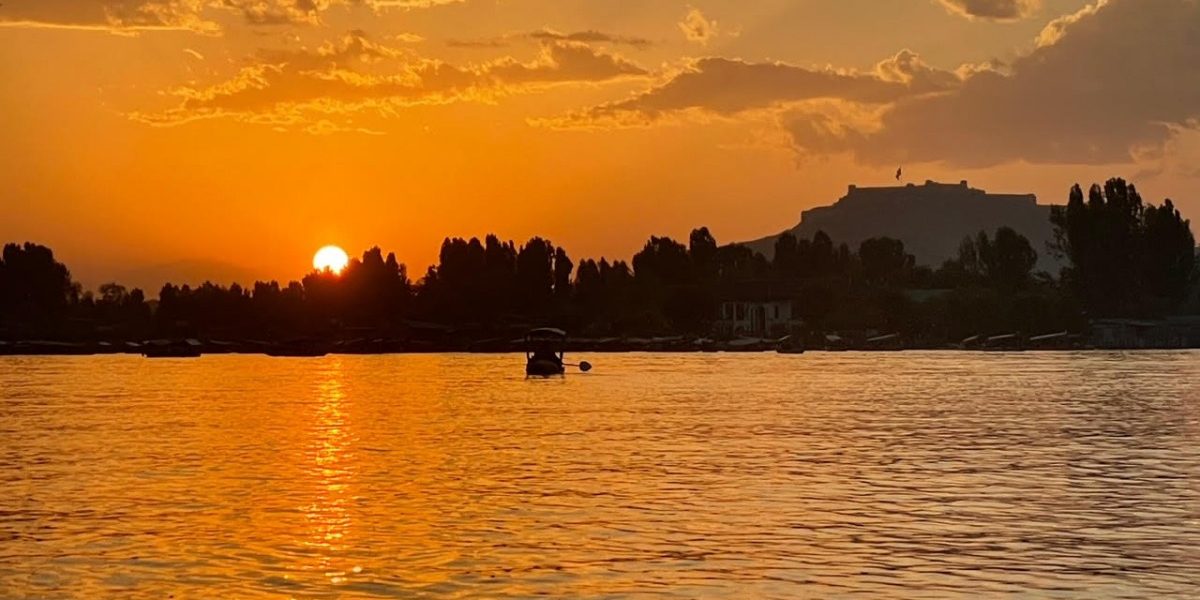 Sunset on the Dal Lake. Compared to the past, the lake doesn't freeze as much any more. Photo: Indra Shekhar Singh.

Despite it having rained already, the bulbous grey clouds hadn’t left Srinagar. The afternoon sun snuck behind the gigantic, lush green mountains; the greenish-brown Jhelum had swollen behind paddy shoots.

I was in Kashmir, chasing the climate chaos. Alarm bells were ringing as rising temperatures were having a pernicious effect on water security and agriculture in the region. Some areas had already reported spikes in the average March-April temperatures, taking them from 15-20 °C to over 30 °C. The agriculture and irrigation departments in Uri and adjacent areas had to put out notices directing farmers to replace paddy with maize. 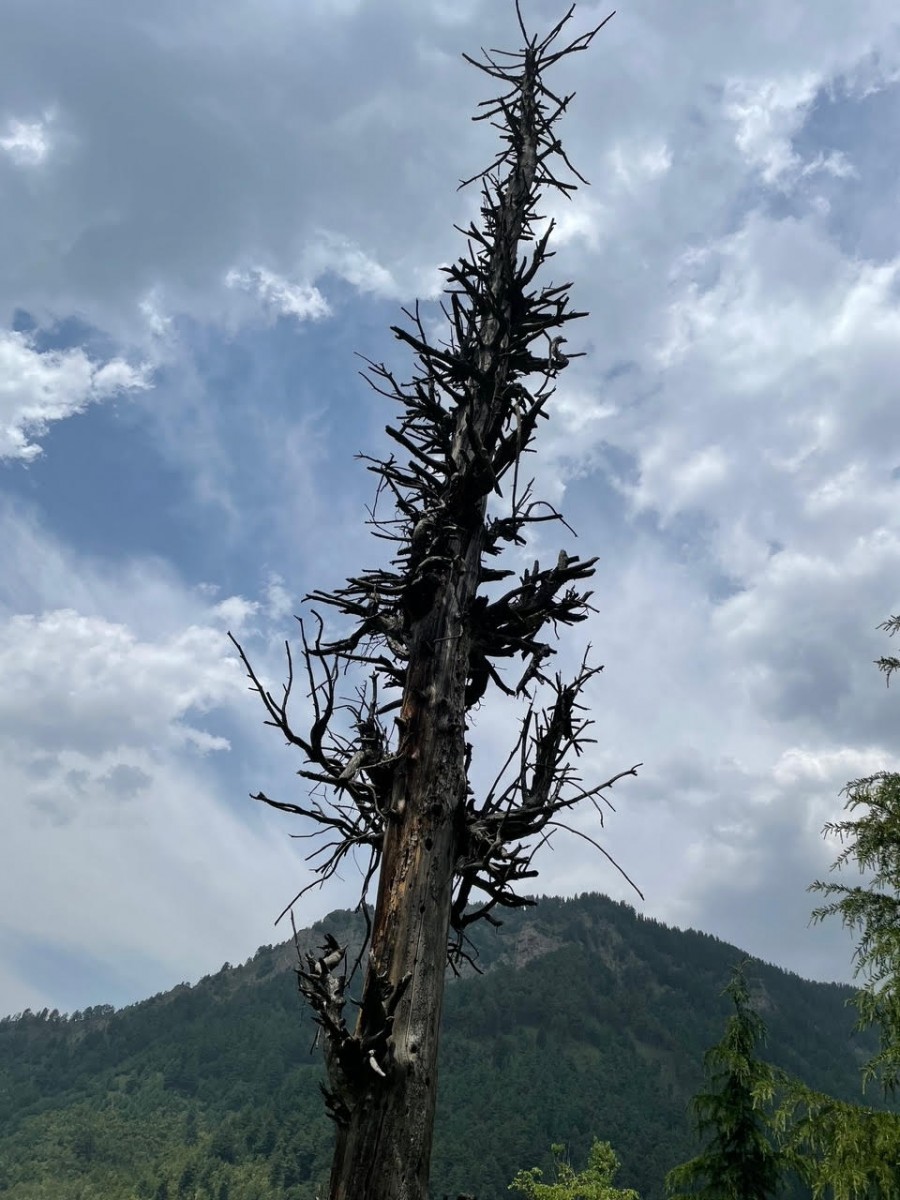 In order to study these changes, I spent the next 14 days between Uri and Pahalgam, trying to find out in which direction Kashmir was going.

My first destination was Kamalkote, a border village in Uri where the land is stilled by oxen plough and people drink directly from fresh springs. Here, I met the elderly Mohammad Younis Khan, the village Pradhan and an ex-serviceman. Before I entered his house, Khan pointed at a fresh water spout, signalling to me to take a sip. I ducked and did so.

“This is the cleanest water, it’s almost alive,” Khan remarked. “If you drink this, no disease will come to you.” I couldn’t agree more.

Khan explained that Kamalkote was a village on the edge, often hit by Pakistani shells. All life – its 4,900 people and over 10,000 goats and cattle – as well as property, is at risk of joining the unknown causalities of cross-border firing.

However, it was a 2005 earthquake that really disrupted life in Kamalkote. “This area has about 250 acres of farming land and few natural sources of water, but due to the earthquake, our water changed course. Even the spring one drank from reduced,” Khan explained.

I spent the day at the village, speaking with the locals about agriculture. Earlier, farmers here grew rajma, maize, paddy and mustard. Now, all food, including milk, come from the market. Much of this is a result of new roads coming up in surrounding areas and the village experiencing a 20% reduction in water.

Over the next few days, I travelled to other areas in Uri – Namla, Bijhama, Gingal, Rustom, et al, to see how climate change is affecting agriculture there.

The situation was not happy. Most of these places reported early sowing due to the excessive heat and fast-shrinking water resources. Overall, each area reported a reduction of 25-30% of snowfall and rain.

I sat with some farmers in Branwar, a hamlet in the Limber village of the Boniyar tehsil, not far from the Indian Army’s border fences. Ali Muhammad Lone, a farmer, was tiling his fields with his oxen, getting the soil ready for maize sowing. “Since I was a child, snowfall has decreased by over 50%. This year, too, there was hardly any snowfall. The nala has also shrunk,” Lone said. 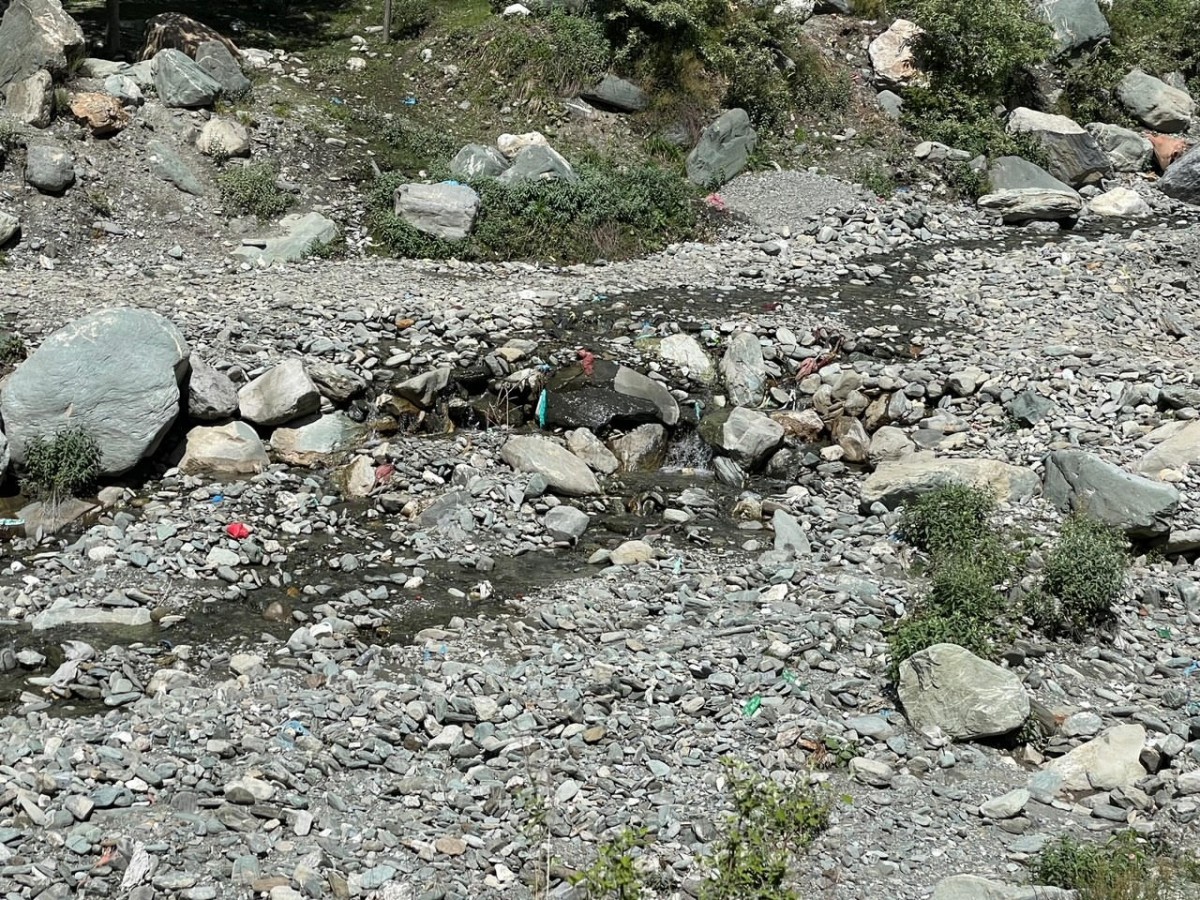 On my way to Uri, I caught up with Dr Sajad Shafi at Bandi, who spoke to me about the changing times. “We never had such heat in May. This year, we saw the temperature rise at least 8-10 degrees in April and May,” Dr Shafi said.

Next, I met with sub-divisional officer for agriculture Daljeet Singh. “We have about 16,000 farming families. And climate change and excessive heat is really affecting the area. Water has reduced in the area, because it’s difficult to lift water from the river. Even government has already issued notice to farmers to shift to maize [cultivation] from paddy,” he explained.

But were other areas also in trouble? From Uri, following the Jhelum river, I reached Srinagar. After spending the day running around villages there, I reached Pulwama to the south with two people – Sanna and Masood Hussain. Sanna works with women farmers in Pulwama and grows chemical-free strawberries.

The sun was setting behind the Pir Panjal range and our hands were busy plucking fresh, succulent strawberries from the ground. However, I soon found out that climate change was threatening these little red fruits too. 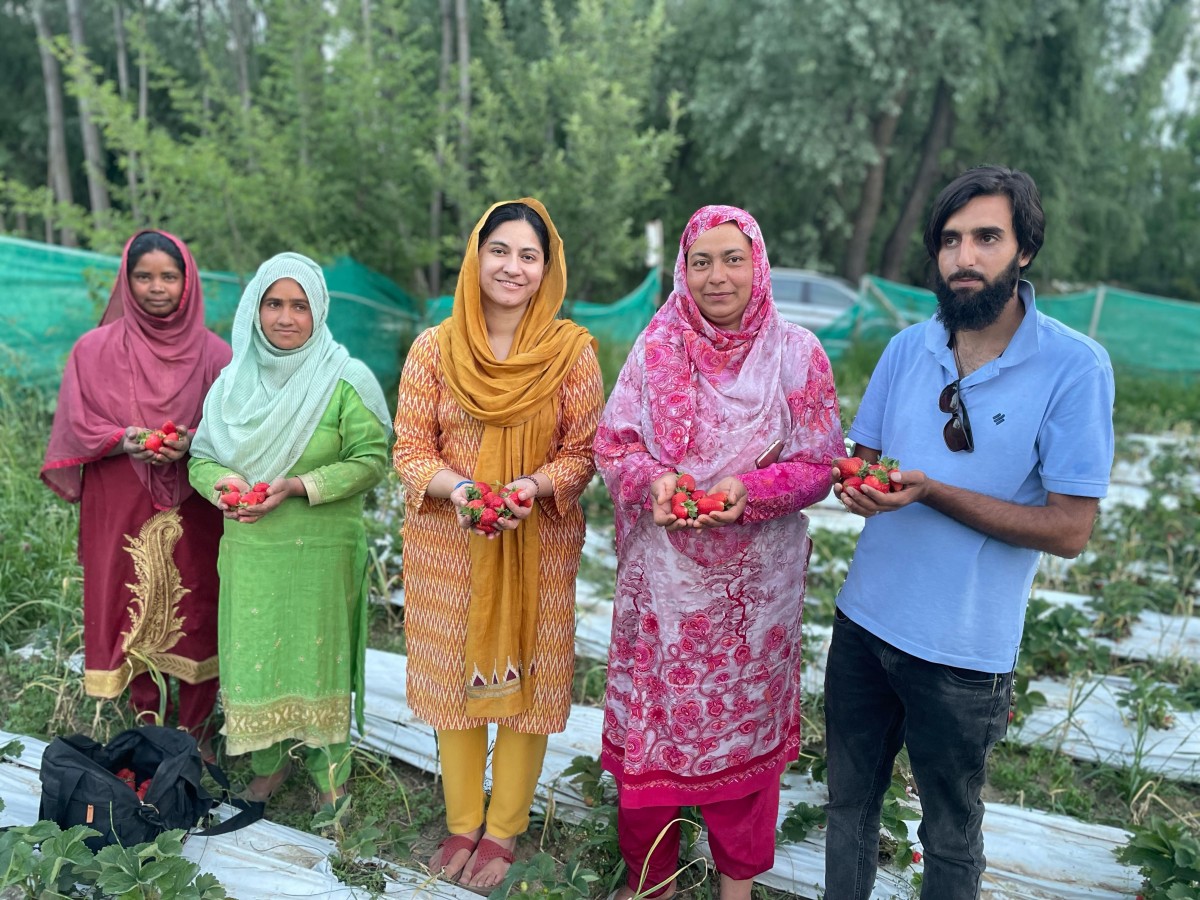 Sanna Masood with other farmers on her strawberry farm in Pulwama. Photo: Indra Shekhar Singh.

“Due to climate chaos, our spring season didn’t arrive. We transitioned straight from winter to summer temperatures. Plants were stressed out and we experienced early flowering, which resulted in lower yields,” Sanna explained. “There wasn’t enough vegetative growth to support healthy fruiting. Usually, the strawberry harvest happens in late May-early June, but due to the changing climate, it happened a month early.”

Sanna and her farmers were confused by the untimely rains, high temperatures and how their near-organic plants were reacting. “Due to the weather, our plants are undergoing an untimely second flowering. This is highly unusual and plant health is also poor. Overall, we had about a 50% reduction in the first flush,” Sanna said.

Strawberries are not alone in suffering, I found, as Sanna explained about the cherry. “Even in cherries, the untimely rain resulted in cherry burst and diseases on the fruit. The agriculture department’s solution is to douse them in fungicides, chemical fertilisers and the like. Being ecologically-conscious farmers, we don’t use chemicals. Plus, I can’t sell fruits loaded with agri-toxins to consumers, it’s not right,” she said. 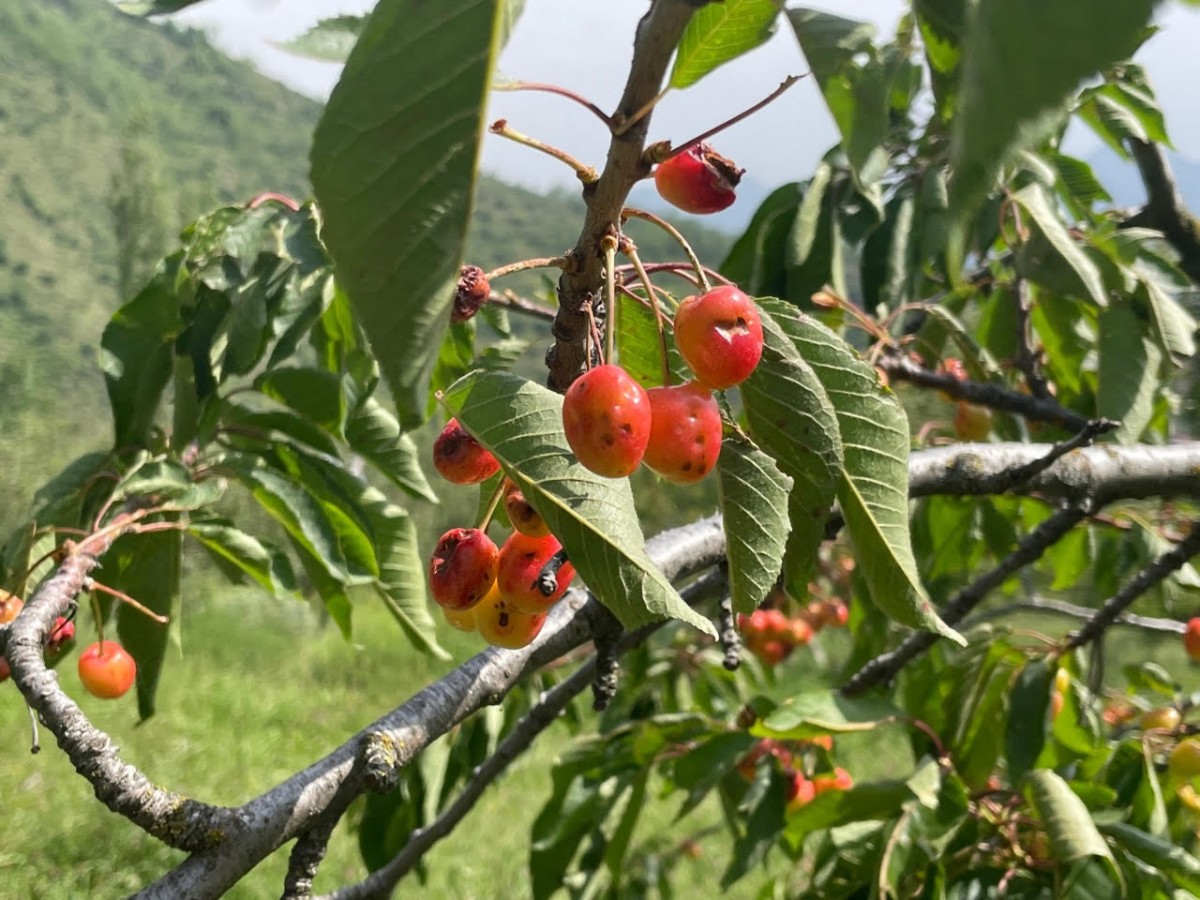 Cherry harvest affected by hailstorms in Srinagar. Hailstorms are a new phenomenon for many Kashmiri farmers. Photo: Indra Shekhar Singh.

Travelling back to Srinagar, it was time for me to take a climate history lesson on the Dal Lake. My teacher was Abdul Meer, a veteran boatman.

“I have played cricket and driven motorcycles on this very lake. But now, the ice is not so thick. Especially this year, very little snow. Due to my age, I won’t risk any of the bike stuff, but nevertheless, it has got much warmer,” Meer said.

The next morning, taking the highway south, I reached the beautiful Anantnag district and met with one Aqib in the Seer Hamdan village, under the 35 °C sun. We looked for shade in the dense apple orchard where Aqib works, but found none.

Aqib has been working with apple farmers for some time now. “Climate change is a major issues now, as this area has started to get hailstorms, which are causing apple loses. Even the temperature has sharply risen, it should be no more than 24-25 °C right now, but see, we both are sweating,” Aqib said.

He also informed me that the shooting and growing cycles of the leaves are also shifting randomly, affecting fruit yields and farmers’ profits.

After talking to Aqib, I stopped at Khaiyar village and spoke with two Chopan brothers – Gula and Abdul Muhamed. Their story was not too different.

Together, the brothers grow a variety of fruits – cherries, walnuts, kiwis, apples; but all of them seemed to be under the weather. “Since there were no rains in March and April, walnut yields are down. In fact, due to a few years of less snow and rain, all fruit crop yields are down,” the brothers explained.

Over the course of our conversation, it became clear that before this year, the region received a few feet of snow and a lot more rain. But those days are long gone.

Next I went to Pahalgam and hiked among the mountain goats and their herders. After a strenuous hike, I reached high enough up to be almost touching a melting ice block. Here, I sat by a tall pine tree and met Qasim Abhunger, a 52-year-old shepherd. “This year, we have had come to lower heights for grass and water. In fact, the past five to eight years have been quite hot and cruel for the goats. The ice also doesn’t stay for long,” he said. 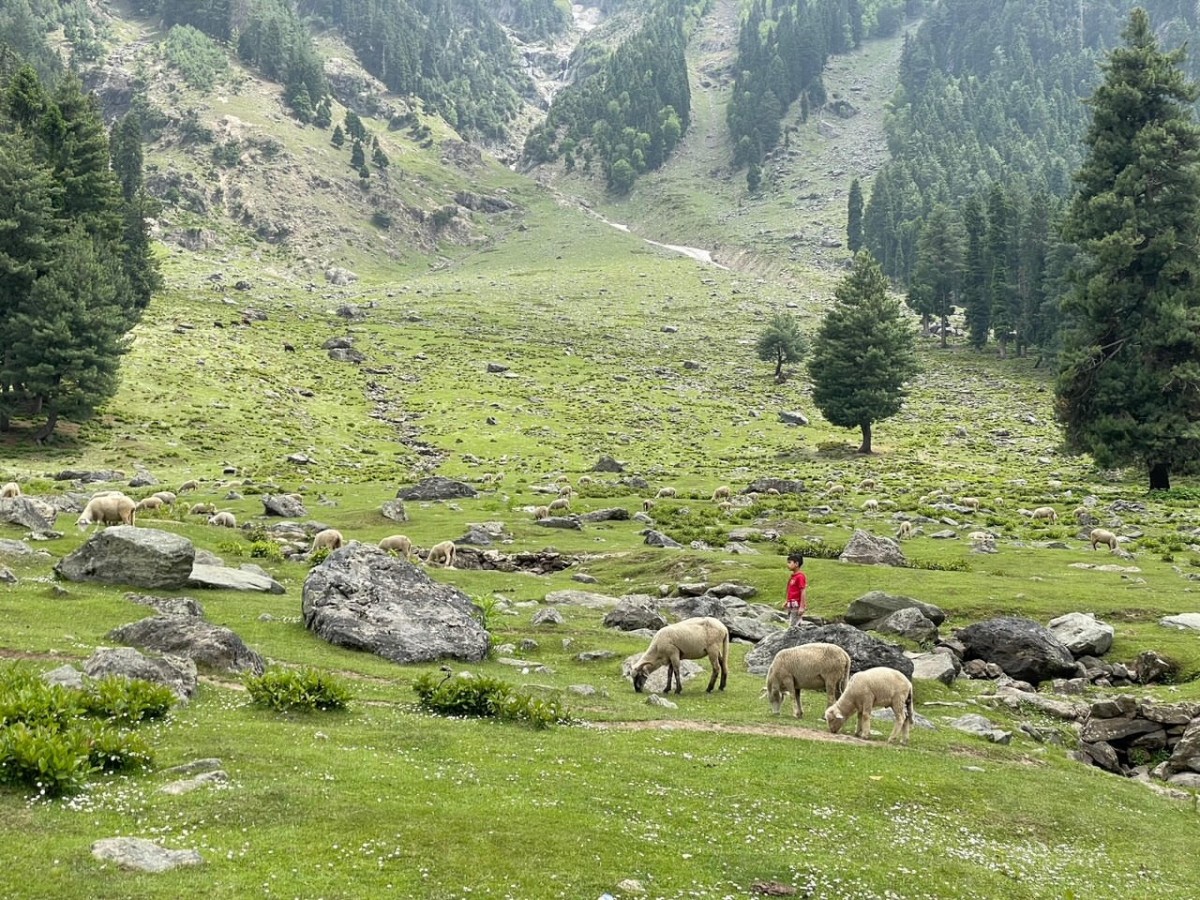 The colour of our kheer

Apart from the despair of farmers and shepherds, drying waterfalls and springs and profuse sweating from the high heat, climate chaos is claiming another victim in Kashmir: its native saffron.

As a final measure, I sat with saffron farmers in Pampore. Their brown grassy fields overlooked gorgeous snow peaks. Here, I met Irshad Ahmed Dar, a progressive saffron farmer. He was quite concerned about the crop losses due to the changing climate.

“Saffron crops depends on the rain and snowfall. In the past few years, we have been experiencing a dry spell, and so far, we have lost 40% of our yields. We needs solutions soon, otherwise the remaining 60% of this wonder crop may be damaged by the changing climate too,” Dar said.

To be honest, I am scared for the colour of our kheer! But if things don’t get better, its not only the native saffron that will suffer but Kashmir itself; its waters, its people and the millions of trees that make it a paradise, all stand at the precipice of an impending climate catastrophe. The only question that remains for us is – can we, all of us together, save this paradise?

Indra Shekhar Singh is an independent agri-policy analyst. He was director of policy and outreach, National Seed Association of India. He is the host and creator of The Wire’s ‘Krishi Ki Baat‘ series. He tweets @IndraSsingh.