In addition to destroying livelihoods linked to dairy farming, leather production and beef export, the government's move will lead to an explosion in the number of 'stray' cattle. 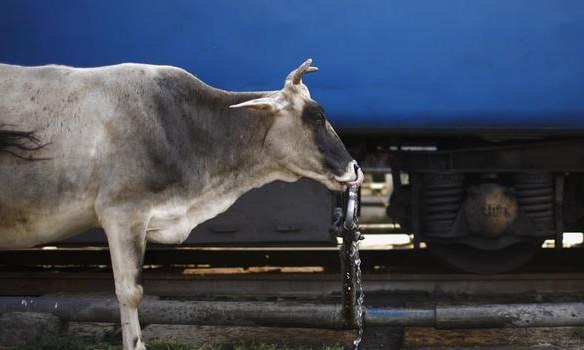 Gazette No. 396, issued by the Government of India on May 23 and titled the ‘Prevention of Cruelty to Animals (Regulation of Livestock Markets) Rules, 2017’, promises to be the final death knell of cattle and buffaloes in India, and along with them, the destruction of what little remains of a dignified life and livelihood for farmers.

This completely innocuous sounding amendment, issued under the Prevention of Cruelty to Animals Act – a Central law – imposes in section 22 a set of ‘Restrictions on sale of cattle’. These require the owner of cattle being brought to the market for sale, in other words the farmer, to produce and submit to the Animal Market Committee a written declaration stating that “the cattle has not been brought to the market for sale for slaughter”. In turn, the buyer of the animal has to undertake “that the animal is being bought for agriculture purposes and not slaughter”

The committee will further keep records of the sale of animals to ensure they are not resold within six months of purchase. They will also keep ID records of the buyer, seller and animal.

By equating ‘slaughter’ with cruelty and criminalising the trade and transportation of animals for slaughter at animal markets as an act of cruelty, the Central government has effectively enforced a country-wide ban on the slaughter of buffaloes and cattle, and the consumption of beef, despite statements of denial from the environment minister.

Animal markets are crucial nuclei of the production cycle of animals, through which animals pass from farmers to others and vice-versa. These new rules effectively choke the free movement of animals via the market space and, more critically, completely undermine the freedom and rights of farmers, traders and all others whose livelihoods are linked to this production cycle, which ultimately is what sustains cattle and buffaloes of this country.

Some estimates suggest that 40% of a dairy farm’s income is derived from the sale of unproductive cows. If there is no longer a market for these cows, the production cycle of dairy farmers gets jammed.

The right  of farmers to life and livelihood is at stake: their dairy livelihoods and bullock-based agricultural livelihoods stand to be completely destroyed with this cruel law – cruel for farmers and cruel for animals.

Farmers rear their cattle and buffaloes for milk, manure and work, and then sometimes sell their animals for multiple reasons and purchase new animals, if they wish to. This law assumes that there is always a farmer ready to purchase another’s cow or bullock. This is simply not true. Being a farmer does not automatically imply that you wish to own or rear animals. Furthermore, it assumes that a farmer will be willing to buy an unproductive cow, buffalo or bullock which reaches the market. There are times during the agriculture cycle when many farmers sell their work bullocks and there are scarce buyers; similar is the case with milch cows and buffaloes.

This is currently the story in several parts of India, such as Anantapur in Andhra Pradesh and Tamil Nadu, which are reeling under drought, where everyone is looking to sell their cows and bullocks for want of water and fodder. Yet even when no other farmer is a willing buyer, the farmers who sells their cow, bullock or buffalo are confident that their animals will fetch a good price in the market because of traders who are involved in the trade of animals for slaughter. This is particularly true in the states with no ban on transportation and/or slaughter of cattle and buffalos. The so-called ‘smuggling’ of animals occurs precisely from those states with stringent bans on slaughter and trade of cattle to those states with no bans, as there are desperate farmers who desire to sell their unproductive animals and get some resale value.

The new rules will stop all trade of bovines for slaughter and thus result in a complete drying up of buyers. And as for farmers – this means they will simply stop rearing bovines and turn their existing ones out to fend for themselves, as has indeed happened in states like Maharashtra with their recent ban on bullock slaughter. These abandoned bovines will just add to India’s teeming numbers of cattle identified as ‘strays’.

Dairy India had better wake up and smell the coffee: some estimates suggest that 40% of a dairy farm’s income is derived from the sale of unproductive cows. If there is no longer a market for these cows, the production cycle of dairy farmers gets jammed. This holds true for large dairy farms as well. Like it or not, those non-productive cows will need to be replaced by younger stock and no farmer is foolish enough to invest his or her precious money in a white elephant – a cow or buffalo so holy that it has no resale value.

With the EU, Australia, New Zealand and the US waiting to dump large volumes of subsidised milk powder into India, and Indian dairy cooperatives fighting hard to stop this, it is extremely foolish of the government to literally kill dairying in the name of animal welfare.

Slaughter, and the markets for beef and leather, complement dairying. In the Indian context, farmers don’t rear cattle or buffalos for beef; they rear them as dairy or work animals, and then when they become non-productive, they continue to have a value due to beef and finally for their skin, used for leather. Beef is a by-product of dairying and draught (work animals), which is the unique aspect of India’s livestock economy.

The arguments put forth on how India’s beef drains resources are spurious, as our animals are primarily grazed and reared on minimal quantities of concentrate feed and provide us with milk, work, beef and leather. The government’s new ‘market trade blockade’ is bound to severely cripple both India’s dairying as well as beef industries. With the EU, Australia, New Zealand and the US waiting to dump large volumes of subsidised milk powder into India, and Indian dairy cooperatives fighting hard to stop this, it is extremely foolish of the government to literally kill dairying in the name of animal welfare. It goes without saying that with this will also spell the end of the buffalo nation – domestic beef consumption, India’s Rs 26,685-crore worth carabeef exports and the Indian leather industry.

If today the slaughter of cattle and buffaloes is considered an act of cruelty, therefore providing a reason to prevent animal sales at markets, then logic follows that it will be only a matter of time before the sale for slaughter of sheep, goats and poultry is also forbidden at animal markets. With the food preferences of the majority of citizens who eat meat and a massive number of livelihoods at stake, this highly contentious interpretation of cruelty needs to be interrogated and challenged.

Sagari R. Ramdas is a trained veterinarian and works with the Food Sovereignty Alliance, India