That a bureaucrat told police to 'break the heads' of farmers who were protesting in Karnal indicates that those in the system have bought into the narrative that farmers are the problem. 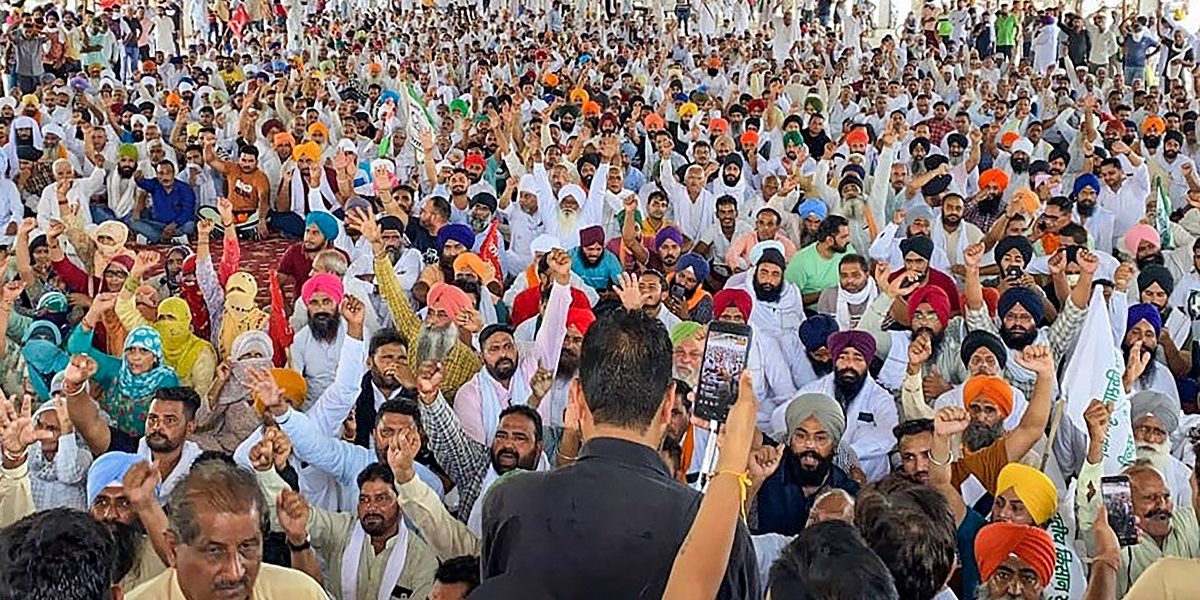 The protesting farmers’ worst fears are slowly starting to materialise. One of their many concerns has to do with the inordinate amount of power the bureaucracy will have over them if the three Central farm laws are implemented.

The Farmers (Empowerment and Protection) Agreement on Price Assurance and Fair Services Bill, 2020 or, as the farmers refer to it, ‘the ‘contract farming law’, gives a shocking amount of legal impunity to private players who enter into agreements with farmers. In case of a disagreement between a farmer and a corporation, for example, a farmer will not be allowed to appeal to the judicial system but only to bureaucrats of the sub-divisional magistrate (SDM) rank or at most, collector rank!

Ravi Azad, a 30-year old youth leader with the Bharatiya Kisan Union, Haryana, points out wryly, “The attack on peacefully protesting farmers at the Bastara toll plaza in Karnal on August 28 has shown us very clearly what we can expect from SDMs.” He is, of course, referring to the chilling video of SDM Ayush Sinha that has gone viral in which he is seen instructing the police to quite literally ‘break the heads’ of the protesting farmers. 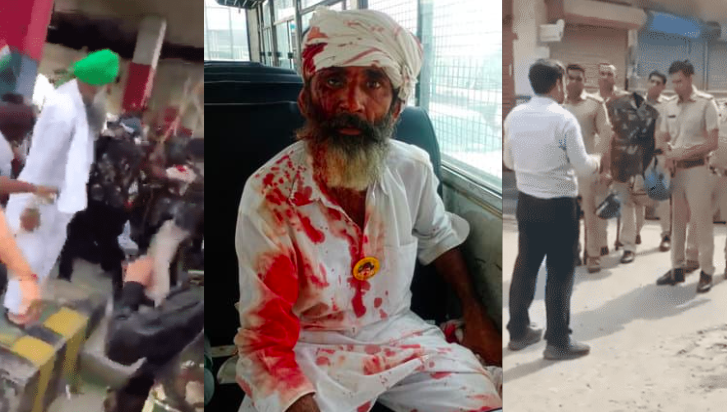 Screengrabs and photographs shared on Twitter showing police lathicharge on farmers at Karnal and its aftermath. Photos: Twitter

Says Azad, “If it comes to a showdown between a farmer and a corporation that has the blessings of this government, how many SDMs will actually deliver justice to the farmer? Most have sold their conscience and will do the bidding of the government in power. If an SDM who instructed the police to inflict bodily harm on peaceful protestors is still walking around freely, where is the rule of law?”

Not only were dozens of farmers badly injured in the lathi charge at the Bastara toll plaza, Sushil Kajal, a farmer in his 50s from Rampur Jata village who had been a part of the protests since they began, succumbed to his injuries. He is survived by his wife and two sons, one of whom is still in school.

In an interview with journalist Mandeep Punia, Jagdeep Aulakh of the Bharatiya Kisan Union says that another farmer, Gurjaint Singh, was beaten repeatedly on the head, but his turban protected him. But when Gurjaint lost his footing and fell, the policeman who was beating him started hitting him mercilessly on the side of his face, breaking his nose and damaging his eyes. Gurjaint now has impaired vision as a result.

Vasu Kukreja, a 27-year old Tis Hazari court lawyer who supports the cause of the protesting farmers and is currently fighting 1,500 cases on their behalf, says, “The police are supposed to follow a Code of Conduct if protestors become a threat. [Here, the protestors were peaceful and not a threat.] The police are first required to issue a verbal warning. If that doesn’t work, they are expected to use water cannons. If that, too, doesn’t work, they are within their rights to use teargas and then, once they have exhausted all other options, they can use their lathis, but only below the waist. As a final resort, of course, they can detain people. But the fact that an IAS officer specifically instructed policemen to hit peaceful protestors on their heads shows we have entered a dangerously lawless time!”

According to Jagdeep Aulakh, the police lathi-charged the protestors not once, but four times.

Agricultural economist Devinder Sharma, who has been focusing attention on the plight of India’s farmers for over two decades now, is surprised neither at the barbarity of the police’s actions nor at the bureaucrat’s orders that brought them about. He says:

“You should see how many people on my Twitter feed are condoning the actions of the police and saying the farmers are gundas and that they deserve this! The reason they believe this is that an entire narrative has been built over the years (and much more actively over the last several months) that farmers are the problem, but they are not. They are in crisis, and have been for many decades now. The three farm laws were the last straw for them and have forced them to take to the streets in protest.”

Sharma holds pro-corporate, neoliberal economists responsible for the mess that Indian agriculture is in today. “Farmers are victims of an economic design that is deliberately impoverishing them. Supranational bodies like the World Bank and the International Monetary Fund encourage countries like India to make agriculture unsustainable, and force farmers off their farm lands so as to turn them into cheap labour in the cities. But the migrant crisis following the lockdown of 2020 showed us just how disastrous that kind of thinking is, and how inhospitable cities are to those who make up the vast majority of the country.”

Sharma wants to know why, at a time when many countries around the world are seriously starting to doubt the wisdom of heavy corporate involvement in agriculture, the Indian government is hell-bent on implementing three clearly pro-corporate farm laws. (The answer, of course, is obvious to anyone who understands the close, symbiotic relationship between this particular government and its favourite corporate houses.)

The bias against farmers, Sharma says, is deep and has been reinforced over the decades by journalists and media houses who simply parrot what ‘pro-reform’ economists saying. It is no surprise, therefore, that so many civil servants have bought into this bias as well.

Sharma, who addresses audiences consisting of both police and civil servants, often tells them, “Before you order a lathi charge against farmers, please understand their circumstances! Please understand they have been given a raw deal systemically and treated unfairly for decades now. You don’t see corporate houses protesting at Jantar Mantar, do you?” 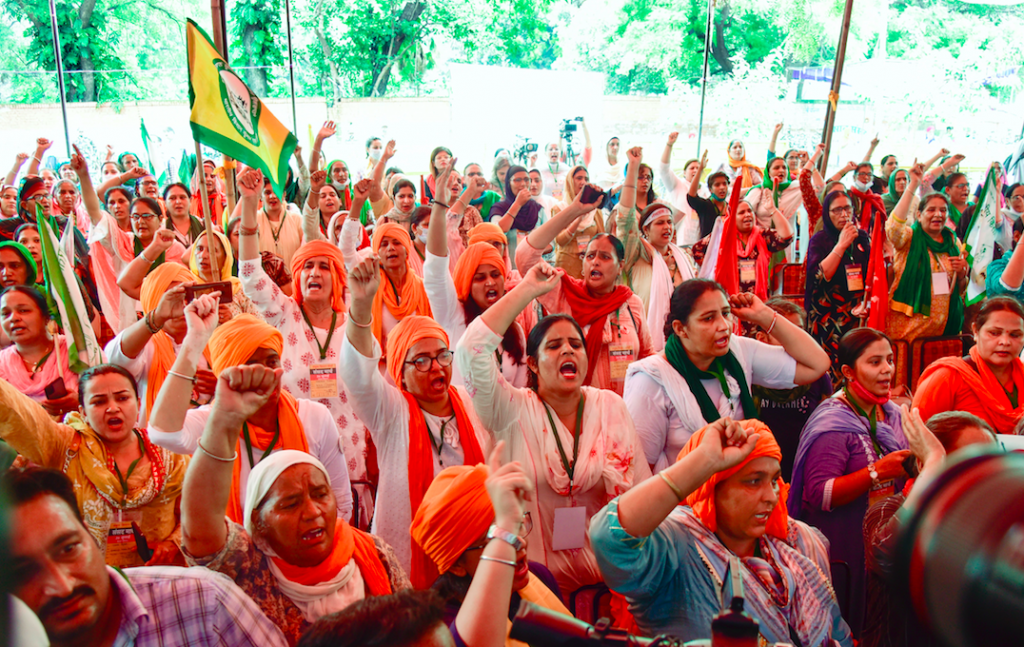 Women farmers and supporters during the Kisan Sansad against the farm laws at Jantar Mantar in New Delhi, July 26, 2021. Photo: PTI

Ravi Azad, the Bharatiya Kisan Union youth leader mentioned earlier sums up the situation and spells out the perils facing Indian society as a whole:

“The British adopted a divide-and-rule policy when they ruled over us. Successive Indian governments have done the same. They have divided us on the basis of caste and religion. Now they are dividing the urban from the rural. You can call us names and look away when our heads are cracked open, but please remember, when the corporations monopolise and cartelise agriculture and food prices skyrocket, we the farmers will still somehow be able to grow our own little bit of food and survive. What will you city dwellers do?”