As a Desperate Government Hides Behind ‘Toolkit’ Hysteria, the Farmers’ Movement is Intensifying

The government should remember that the more it humiliates the farmers, the greater will be anger pouring out on the streets. Faremers arrive to attend a Maha Panchayat or grand village council meeting as part of a farmers' protest against farm laws at Bhainswal in Shamli district in the northern state of Uttar Pradesh, India, February 5, 2021. Photo: Reuters/Danish Siddiqui

The way Prime Minister Narendra Modi and agriculture minister Narendra Singh Tomar defended the three controversial farm laws in parliament has left little room for any further dialogue with agitating farmers. According to farmer organisations, the agriculture minister has taken a far more strident position in parliament than during talks with them. Therefore, any offer of talks from the government now sounds hollow to them.

The government had grossly underestimated the resolve and determination of farmers to sustain the agitation for a prolonged period and convert it into a mass movement. However, farmers across the country are favourably responding to the demand for minimum support price or minimum assured income that has been denied to them by every successive government. That is why more and more farmers are volunteering to be part of this historic resistance movement. The loss of over 150 lives has not in any way dampened their spirit.

The agitation has already spread to new areas in Haryana, Uttar Pradesh and Rajasthan. Cutting across caste, religion and political lines, farmers are enthusiastically congregating at “maha panchayats” in these states. They ensured that the “chakka jam” on February 6 remained largely successful. Besides, the main protest sites at Singhu, Tikri and Ghazipur have been strengthened to resist violence by vigilante groups with the backing of police.

The three sites have become a symbol of resistance for the farmers and challenge for the government. The government has withdrawn water, power and sanitary facilities to thousands who are camping there, disregarding the presence of the old, and of women who need access to sanitation. Concrete and metal barricades have been erected and access spiked with sharpened iron rods and concertina wire. The protest sites at Singhu, Tikri and Ghazipur give a look of a war zone. 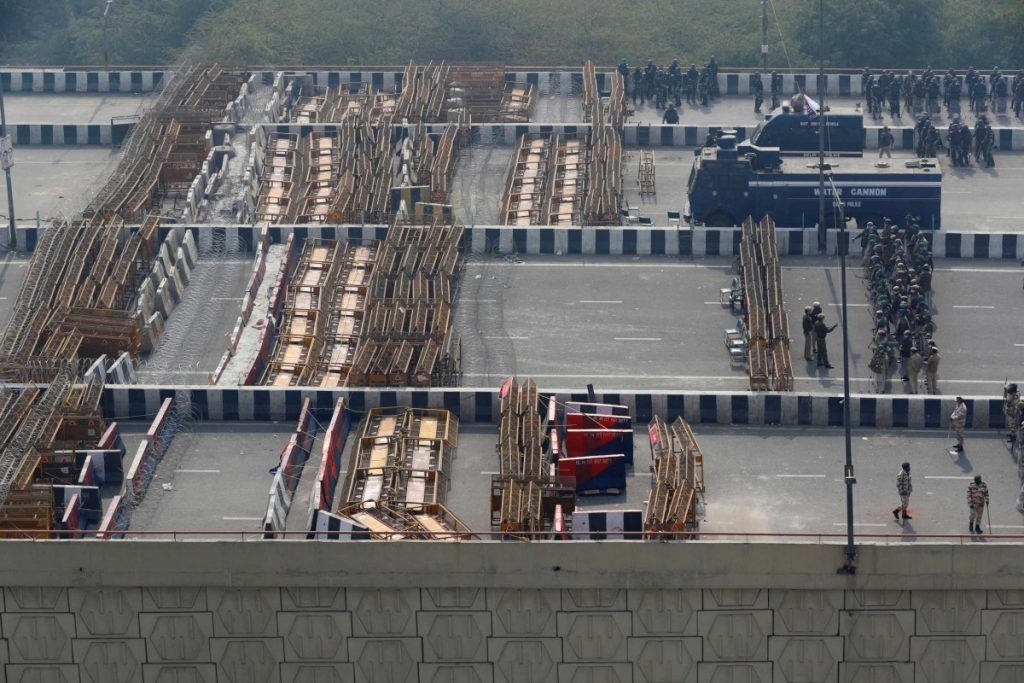 View of the extensive barricade between famers and riot police at a protest against farm laws at the Delhi-Uttar Pradesh border in Ghaziabad, India February 3, 2021. Photo: Reuters/Adnan Abidi

Having failed to browbeat reporters and freelancers on social media, the government is now at war with Twitter and Facebook to block hundreds of accounts which bring out the farmer’s plight and truthfully report the ground situation. Any support from international personalities for the farmers is dubbed as subversive and brushed aside as interference in the internal affairs of the country. The Ministry of External Affairs (MEA) has slammed those voices and the ever ready Delhi police has not only registered a case to uncover an ‘international conspiracy’ but has begun making arrests.

On the other hand, no one in the government raised an eyebrow when Gita Gopinath (a US national) with the International Monetary Fund (IMF) supported the three controversial laws. Why should she be allowed to comment on the domestic policies of India but not those who are critical? Is it only because she is employed by the IMF, which is dictating our policies?

Besides the IMF, the United States has also come out in support of farm laws – both being on the same side of the fence. The US embassy statement says “we recognise that peaceful protests are a hallmark of any thriving democracy, and note that the Indian Supreme Court has stated the same. We encourage that any differences between the parties be resolved through dialogue. In general, the United State welcomes steps that would improve the efficiency of Indian markets and attract greater private sector investment”. In my view, the first two sentences are just sugar coating for the bitter pill at the end. 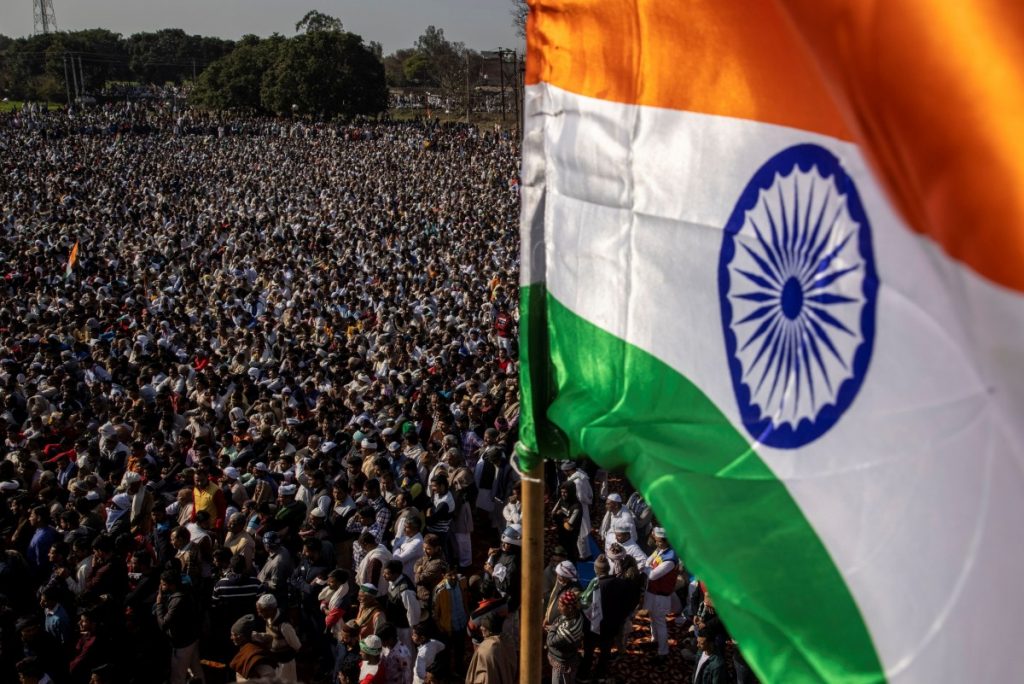 People attend a Maha Panchayat or grand village council meeting as part of a farmers’ protest against farm laws at Bhainswal in Shamli district in the northern state of Uttar Pradesh, India, February 5, 2021. Photo: Reuters/Danish Siddiqui

Before pressing others, the US authorities should look around and see what is happening to farmers in their country. In the US, farmers are under a loan burden of US$ 416 billion (about 30 lakh crores). According to an 2019 article in TIME magazine evocatively headlined, ‘They’re trying to wipe us off the map’. Small American farmers are nearing extinction”, the US lost 100,000 farms between 2011 to 2018. Farm bankruptcies are up by 12% and suicides in farm communities are happening with alarming frequency. In fact, four million farms have disappeared from 1948 to 2015, taken over by big corporates. Many small farmers are compelled to sell their produce at lower prices than their input cost.

Similarly, Philip H Howard and Mary Hendrickson have claimed that corporate consolidation of food production has resulted in rising food costs in the US. According to them, in 2019, over 35 million individuals were food insecure as they did not have reliable access to affordable and nutritious food. The situation has only worsened post COVID-19.

Also watch | Why Do Farmers From UP Regret Voting for Narendra Modi?

Why then is the Indian government determined to play havoc with the lives of small and marginal farmers, who constitute more than 80% of all farmers? Where are they going to disappear? What will happen to our food chain? How will the poor and needy have access to food? Would the IMF provide us with any answers or tell us where in the world their farm policies have placed money in the hands of small farmers? Questions abound, but no answers from either the government or IMF.

But the farmers already know the answers. That is why they are on the streets against all the odds stacked against them. The government should remember that the more it humiliates the farmers, the greater will be anger pouring out on the streets.

The biggest gain from this agitation is that the well-rehearsed and well-tested divisive policies of the present government have only produced contrary results – uniting farmers irrespective of caste, religion and region. This is what happens to a government that is out of touch with the peoples’ pain and lives in its own make-believe world.

Avinash Mohananey is a former official of the Intelligence Bureau.