Documents obtained by The Wire through RTI requests reveal a series of rejections by the finance ministry of the agriculture ministry's requests for a budget hike. 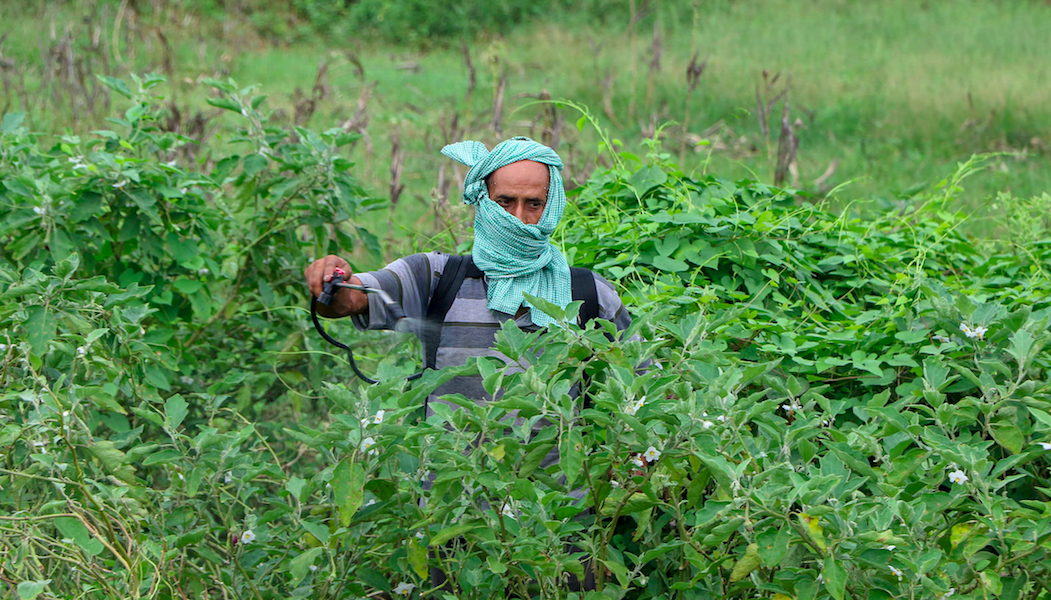 A farmer sprays pesticides on his crop at a field, on the outskirts of Jammu, September 4, 2020. Photo: PTI

New Delhi: The Union Ministry of Agriculture had recently demanded an increase in the budget of several major agricultural schemes in the country, citing a shortage of funds.

It argued that in the absence of a proper budget allocation, farmers were unable to fully avail themselves of the benefits of existing schemes. Eventually, the Ministry of Finance rejected the demands of the agriculture ministry, documents obtained by The Wire under the Right to Information (RTI) Act reveal.

Programmes that the agriculture ministry had sought an increase in the budget for include Pradhan Mantri Fasal Bima Yojana (PMFBY), and Pradhan Mantri Krishi Sinchayee Yojana (PMKSY). It also asked for funds for other schemes aimed at relaxation of interest rates on agricultural loans, distribution of pulses on subsidy by states and Union Territories and development of horticulture.

In a letter addressed to the finance ministry dated October 25, 2019, Shyam Lal, Senior Statistics Officer of the Budget Division of the Union Ministry of Agriculture, proposed that the budget of Crop Insurance Scheme for the financial year 2020-21 be fixed at Rs 19,690.19 crore.

In the letter, the official stated that in order for the government to discharge its committed liabilities for releasing premium subsidy to farmers, there is a need to increase the budget.

Also read: Centre’s Crop Insurance Scheme Is ‘Voluntary’, but Opt Out Model Leaves Much to Be Desired

According to the documents, Ministry of Agriculture secretary, Sanjay Agarwal had advocated for a budget hike in a meeting with the finance ministry held on November 8, 2019. He said that the number of voluntary insurers under the Prime Minister Crop Insurance Scheme has increased and about 30% of the agricultural sector has been covered under it.

In a meeting with the then Secretary (Expenditure) Atanu Chakraborty, Agarwal highlighted the biggest problem of the scheme – non-payment of claims to farmers on time. Agarwal said payment of several claims under this scheme was still pending.

However, the agriculture ministry’s demand was rejected and the budget of PMFBY was fixed at Rs 15,695 crore for the financial year 2020-21.

According to a report published in The Wire recently, 80% of farmers’ crop insurance claims in the Rabi season of 2019-20 have been unpaid, one and a half months after they ought to have been paid.

The total reported claims for this season amount to Rs 3,750 crore, out of which only Rs 775 crore has been paid to the farmers.

During the last two years, The Wire has reported several times how delayed payment of farmers’ claims under the Prime Minister Crop Insurance Scheme has become an integral part of the scheme itself.

The non-payment of claims on time is a double whammy for the farmers. While they lose one crop to natural calamities, they are unable to plant the next crop due to shortage of funds as their insurance claims remain unpaid.

The agricultural budget was discussed during the November 8 meeting with the Ministry of Finance, chaired by then Secretary (Expenditure), Atanu Chakraborty. The Wire has received a file note in this regard signed by Chakraborty, dated November 18, 2019.

Ministry of Agriculture Budget by The Wire

As per the note, the finance ministry stated that the demand of the agriculture ministry for an increase in the budget has been turned down owing to the delay in spending the allocated amount and a considerable amount being left unused in the previous budget.

However, it is clearly evident from the documents that the budget of the crop insurance scheme was expeditiously spent.

Another demand to raise the budget of the scheme that offers interest rebate on loans to farmers by an additional Rs 10,000 crore has also been rejected by the finance ministry.

Under this scheme, loans of up to Rs 3,00,000 are provided to farmers at 7%. If the farmer repays the entire loan to the bank within a year, he gets a 3% discount on the interest and thus he has to pay 4% interest instead of 7%.

The government of India allocates budget every year to grant relaxation to farmers under this scheme which was implemented in Kharif season of 2006-07.

Rationalising the ministry’s demand regarding the budget, the agriculture secretary, Sanjay Aggarwal, said that the number of agricultural loans has increased sharply and a considerable part of the amount fixed for this scheme has already been spent.

Thus, it is clear that the amount allocated for granting relaxation on interest on loans to farmers was spent promptly. The ministry had sought to raise the revised budget for the current financial year and the budget estimate for the next financial year.

However, this demand of the agricultural ministry was also rejected.

Ministry of Agriculture Budget by The Wire

According to the file note for the budget meeting held on October 8, 2019, ‘the agriculture secretary said that there has been a steep rise in the applications for agricultural loans in the past few years. A target of Rs 13,50,000 crore for disbursing loans has been set for 2019-20. For this, out of Rs 18,000 crore allocated in 2019-20, Rs 13,002 crore has been spent so far. The fund allocated under the general part of the scheme is almost exhausted.’

On August 9, 2018, Prime Minister Narendra Modi approved of a crucial agricultural scheme in a Union cabinet meeting. Under the scheme, pulses purchased under various Price Support Schemes (PSSs) are provided to states and Union Territories at concessional rates.

The scheme allowed the sale of pulses to the states at the discounted rate of Rs 15 per kg so that the Centre’s stock of pulses could be spent and used for various welfare schemes such as the mid-day meal, public distribution system (PDS), Integrated Child Development Services, etc. 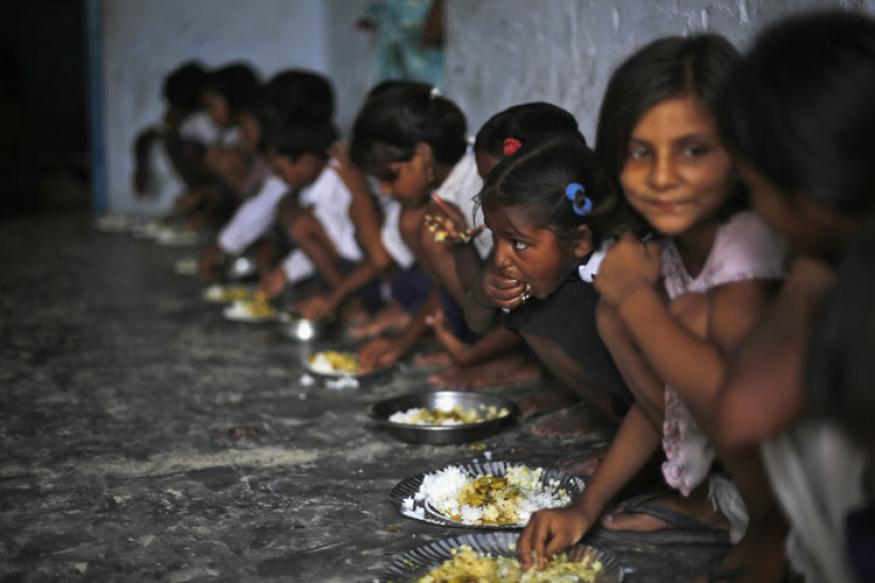 Schemes such as the mid-day meal, if implemented properly, can help tackle child malnourishment. Photo: Reuters

However, the documents show that both the budget allocation and expenditure of this scheme is quite low.

Apart from this, the agriculture ministry had also asked for a revision in the the budget for the financial year 2019-20, to Rs 1,588.95 crore.

However, the finance ministry rejected both these demands and kept the budget of 2020-21 the same as that of the previous year, at Rs 800 crore. The budget of the current financial year, on the other hand, was reduced to Rs 370 crore.

The agriculture ministry had said in its letter to the Ministry of Finance that their demand is based on the actual allocation under the scheme.

Under this scheme, only 22% of the budget had been spent during the first six months of the financial year 2019-20, as estimated in September 2019.

Similarly, an increment of Rs 794.70 crore was sought in the budget of the Integrated Plan on Agricultural Cooperation as compared to the previous year.

The Ministry of Agriculture had said that additional funds are required to discharge the committed liabilities of the National Cooperative Development Corporation (NCDC) in relation to the already approved project under the agricultural support system.

The budget allocated for the purpose was Rs 85 crore for the previous financial year 2019-20. But the agriculture ministry had demanded a phenomenal hike in it to Rs 2,326.70 crore.

In response, the finance ministry revised the budget for the financial year 2019-20 only slightly by Rs 55 crore to Rs 140 crore.

Also read: Exclusive: 30% of PM Kisan Funding to Go Unspent as Centre Doesn’t Know How Many Farmers India Has

Documents reveal that owing to the savings achieved in the allocated amount, the agriculture ministry had recommended that the allocation for PM Kisan be reduced to Rs 60,180 crore for 2020-21. But rejecting this recommendation, the finance ministry allocated an amount of Rs 75,000 crore, which is the same as the previous year.

The Wire has earlier reported several times how it is impossible to spend the whole amount of the budget allocated for PM Kisan within a year. One of the main reasons is that the Union agriculture ministry does not have clear data on the total number of farmers in India. Under the PM Kisan scheme, there is a provision to add Rs 6,000 farmers’ accounts, in three instalments of Rs 2,000 each, every year.

Earlier, another report published by The Wire stated how the Ministry of Agriculture had demanded an increase in the budget of welfare schemes for farmers, including the Market Intervention Scheme-Price Support System (MIS-PSS) and Pradhan Mantri Annadata Aay Sanrakshan Abhiyan (PM-AASHA). But the finance ministry rejected the demand and instead made heavy cuts in the budget for 2020-21.