'Agriculture and Atmanirbharta' Is a Noble Vision, but Needs Hard Decisions and Political Consensus

While self-sufficiency has been baked into how India has historically looked at the agriculture sector, long-term planning is the need of the hour. 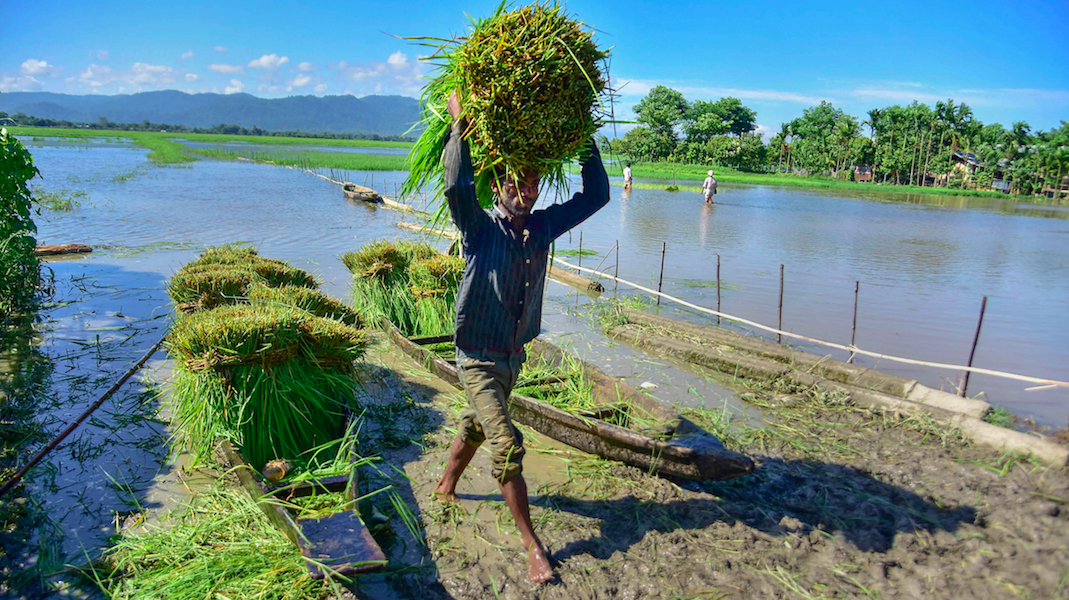 A farmer carrying fodder for his domestic animals walks on a submerged field after monsoon rain, in Morigaon District, Wednesday, August 19, 2020. Photo: PTI

In his address to the nation on May 12, 2020, the Prime Minister gave a call for Atmanirbhar Bharat Abhiyan. He said that the state of the world today teaches us that an Atmanirbhar Bharat is the only path and our scriptures mention eshah panthah, self-sufficient India.

For agriculture, self-sufficiency has been an objective from the first five-year plan itself, which allocated about one third of plan funds to agriculture. Large irrigation projects were started and several fertiliser manufacturing units were set up in the public sector. Agriculture grew by 3.22 % in the first plan (1951-52 to 1955-56) and 3.59 % in the second plan (1956-57 to 1960-61).

The green revolution was initiated in the third plan and despite loss of momentum in the 1990s, the country has become largely self-sufficient in most food items, though India still depends on imports for about two third of its edible oils requirement. Also, in spite of low consumption of proteins by a vast section of population, India has been a net importer of pulses for most of the years in the last decade. The country also had to import other agricultural produce from time to time e.g. in 2019-20 import of five lakh tonnes of maize was permitted by the government.

A Working Group under the Chairmanship of professor Parmod Kumar of Institute of Social and Economic Change, Bengaluru, was set up by the Niti Aayog in July 2016, to work out demand and supply projections of crops, livestock and fisheries up to 2032-33. The Working Group assumed that in this period, the Indian economy will grow by 6 to 8% per annum. Various methodologies used by the Working Group projected food grain demand ranging from 326 to 350 million tonnes.

The Working Group calculated averages of various estimates and projected demand of food grains at 337.01 million tonnes in 2032-33. Its estimate of domestic production (supply) in that year is 386.25 million tonnes. Wheat and rice are projected to be in surplus while the production of pulses is estimated to be lower than the demand. In the case of milk, eggs, meat, fish, vegetables, fruits and sugar, India is projected to meet its demand through enhanced production.

The demand of pulses in 2032-33 is projected to be 35.23 million tonnes while production is estimated at 33.95 million tonnes. Though the gap is narrow, India needs to increase its production of pulses so that the protein needs of its vast population can be met. A recent IFPRI paper, A comparison of the Indian diet with the EAT-Lancet reference diet shows that the  poorest Indians get less than 20% of the recommended calories from protein sources. 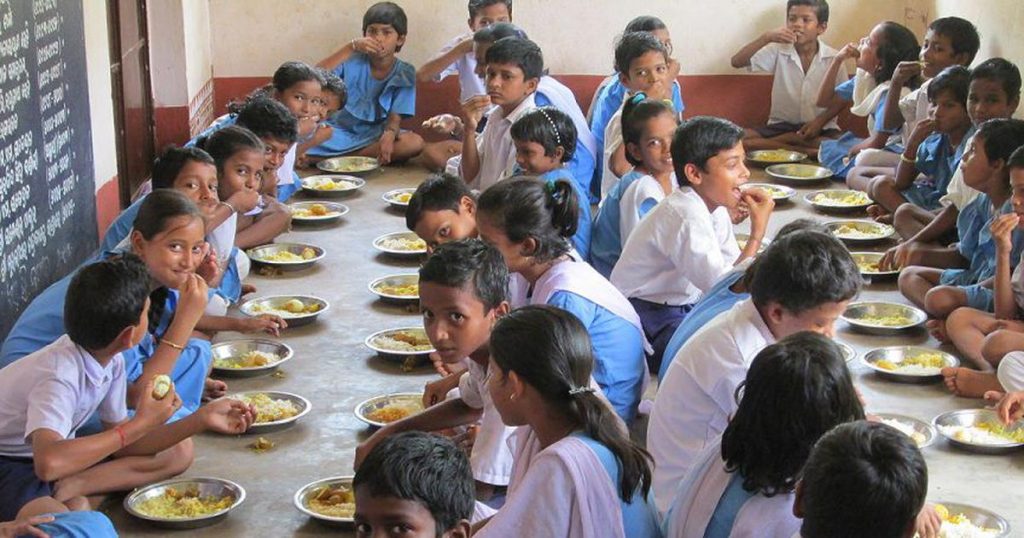 The Working Group noted that investment in technology, research and logistics will be required for increasing productivity to meet the demand of various food items by 2030-31.

Thus, long-term planning for atmanirbharta in agriculture is very much the need of the hour.

The Mission has been extremely successful as evidenced by increase in production and productivity of wheat, rice and pulses since 2007.

In 2014-15, the government of India launched the National Mission on Oilseeds and Oil Palm (NMOOP). It had three Mini Missions: the Mini Mission I on Oilseeds, Mini Mission II on Oil Palm and Mini Mission III on Tree Born Oilseeds (TBOs). The main objective of the Mission was to increase production of vegetable oils sourced from oilseeds, oil palm and TBOs. In 2018-19, the Ministry of Agriculture released Rs 341.32 crore. Now, NMOOP has become a part of NFSM.

Also read: How ‘Dirty’ is India’s Palm Oil and What Should We Do About It?

If India has to move towards atmanirbharta in edible oils, a National Mission should be launched without delay so that import dependence can be reduced.

In January 2012, Commission for Agriculture Cost and Prices under Dr Ashok Gulati had submitted  a  report titled ‘Oil Palm: Pricing for Growth, Efficiency & Equity – Towards a Rational Pricing Policy for Fresh Fruit Bunches and Potential Solution for India’s Burgeoning Edible Oil  Imports’. It was noted that one million hectares under oil palm can produce edible oil equivalent to 15 million hectares under other mix of oilseeds. One of the recommendations was to keep the import duty trigger at US$ 800/MT. If domestic prices fall below US $ 800 per tonne, the import duty needs to be increased so as to protect Indian producers.

The recommendations and the road map suggested by CACP are still valid. The farmers can meet India’s food requirement till 2032-33 provided they get support in the form of good seeds and other inputs and they are protected against cheap imports. The price of imported edible oils at Indian ports should never be lower than the Minimum Support Price for oil-seeds. The allocation of budget for promotion of oil-seed cultivation needs to be substantially increased if farmers of North West Indian States have to be incentivised to switch from wheat, rice and sugar cane to oilseeds. 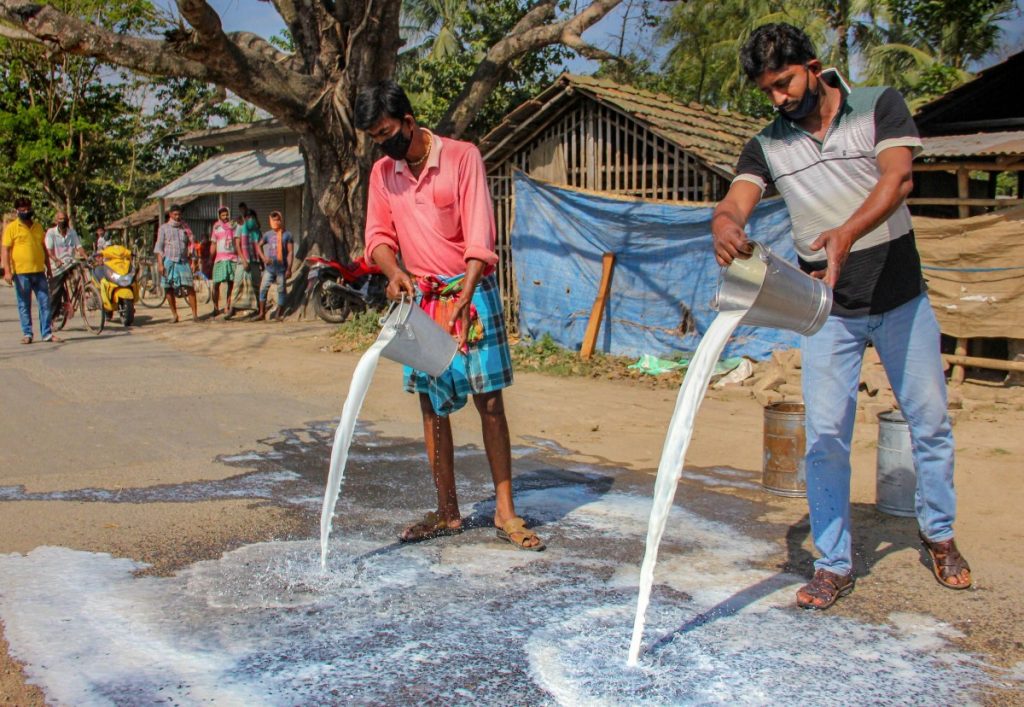 Dairy farmers throw away milk in Nadia, saying they are neither able to sell it nor store it during the lockdown. Photo: PTI

In the next few months, India and the US are likely to reach a ‘Quick Trade Deal’. The US wants ‘equitable and reasonable access’ to Indian market for its milk and poultry producers.  The US would be hoping to repeat its success in the last three years, in trade negotiations with Korea, China, Canada and Mexico. The US wants tariffs on dairy products to be brought down from 30-60% to about 5%.

India walked out of Regional Comprehensive Economic Partnership (RCEP) in which China was a dominant player. It has to be seen if India can stand its ground in trade negotiations with the US and Indian agriculture is not made to pay the price for strategic support of US.

For meaningful implementation of reforms initiated by the Centre through the three recent ordinances on marketing, essential commodities and contract farming, a consensus is required between the Centre and the States. There is commotion in Punjab as it is feared that their produce will not be procured at MSP.

Punjab and Haryana will continue to remain central to India’s food security. The farmers of these States have to be explained the benefits which will flow out of these reforms, focused primarily on marketing. The Centre should fund a package for these states for reducing the dependence on wheat and rice and diversifying to oilseeds, maize or horticulture.

Atmanirbharta for agriculture is a splendid vision which can provide much needed food security to the nation in an uncertain world order. It will bear fruit if only the Centre and the States work together and short-term concerns of food inflation are not allowed to determine trade policies and import tariffs. Cheap imports are as detrimental to agriculture as they are to industry.

A meeting of the National Development Council to lay out a road map of atmanirbharta to 2033 is the need of the hour.