Agri Law Protests: A Black Day for Farmers at Ghazipur

Across the world, as the moon darkened, farmers observed a 'black day' on May 26 to mark six months of their historical protest. 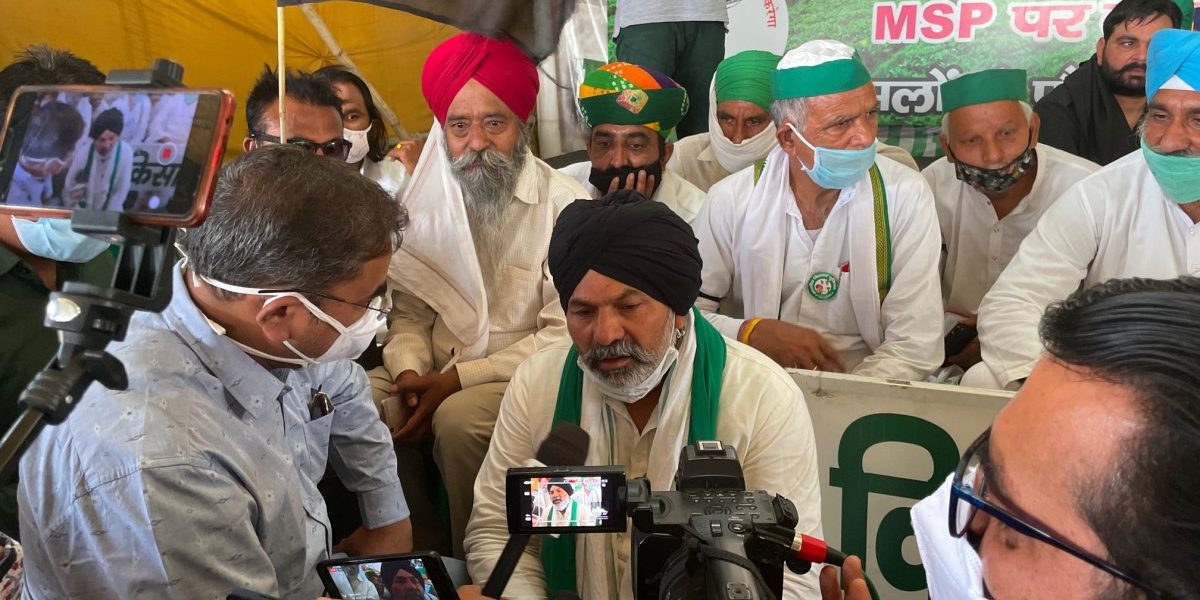 Ghazipur: Just as hundreds of farmers were about to burn Prime Minister Narendra Modi’s effigy, the police – uniformed and in plainclothes – stepped in. In their rush to put an end to the matter, the officers ended up ripping the hands and feet of the Modi dolls.

“The police was misbehaving under orders. They obstruct our right to protest. Never before have we seen police attacking a dead effigy. We will complain against them,” farmer leader Rakesh Tikait said.

Luckily, the farmers seized the effigy soon after, took it to another spot and set it on fire. A circle of farmers formed, pushing the policemen out while the effigy burnt. And for those of us watching, the “black day” had began.

Across the world, as the moon darkened, farmers observed a ‘black day’ on May 26 to mark six months of the historical protests against the Modi government’s controversial agricultural laws. The police action in Ghazipur backfired and ended up electrifying the gathering, which quickly swelled to a few hundred.

While much of the mainstream media coverage surrounding the ‘black day’ event centred around whether the gathering was breaking COVID-19 social distancing protocols – an extremely valid concern – why do farm leaders have remained steadfast in their protest despite the obvious risks posed by the pandemic. 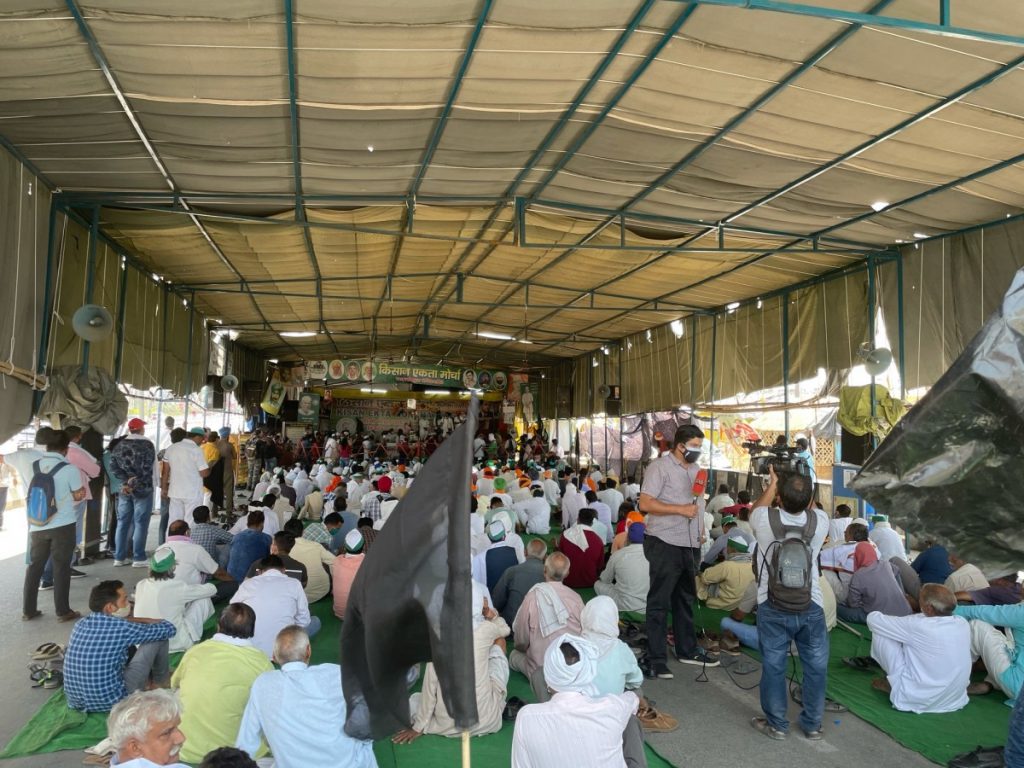 This reporter headed out towards the Ghazipur camps, in the hot sun. Many farmers were eating food, while others were returning to their hookah. But what are the protestors thinking of? MSP, Kharif sowing, money or returning home? Virender Singh, a middle aged-farmer, didn’t mince his words: “We got Rs 1,700 per kg of wheat, after giving a bribe of Rs 100 and 1 kg of wheat.” The government’s claims of bumper harvest and procurement were cracking.

Recently the government did a flip-flop on the fertiliser subsidy hoping to garner farmers’ support. Virender pointed out: “Modi is a master economist. First DAP bag prices increased, naturally farmers protested. Post it, bag sizes were reduced by 5 kg and farmers are still paying Rs 1,200.” Many other farmers on the right and left, suffered this angst.

Jasbeer Singh Mallik, a 56-year-old farmer from Muzaffarnagar, recently got Rs 1,600 for his wheat. He narrated his story,“UP government is not procuring our wheat. There is a four month waiting, they say.” Jasbeer was among many who feel cheated by politicians’ procurement promises.

“Since the Modi government [came to power], our inputs – fertilisers, seeds, diesel, electricity, costs have sharply increased, but the market prices keeping falling. We have no margins left. Each family with a Kisan Credit Card has a minimum of Rs 2-3 lakh debt. They are refinancing current loans by taking more loans. COVID-19 has exacerbated the agrarian crisis, that’s why farmers are hoisting black flags,” he added.

But maybe the younger generation thinks differently? Sunil Balliyan, from Shamli, a young farmer, wore all-black in protest. The growing black-marketing of commodities in his area perturbed him. “It is because of the farmers’ revolution that we are getting better prices. But until there is a law to guarantee MSP, no one is can guarantee fair prices to vegetable growers to sugarcane farmers. In addition, the government is goading us into a debt trap. Why no pay sugarcane dues the same day? Meanwhile farmers are told to take more loan, but not to demand renumeration for their sugarcane on sale-day,” he said.

Sunil was also disturbed by rising crime and drug-use in the area. All signs of decaying community.

To unravel the puzzle, we need a long-term view. It’s about then Swaraj Chaudhaury, a 75-year-old farmer from Baghpat, helped out, “In my entire life, farming has never been so bad. If our children don’t get jobs, we have nothing. Modi needs to take the laws back, or else rural India will suffer immensely. Only Adani and Ambani will control everything, rest of us put under a company-raj.” 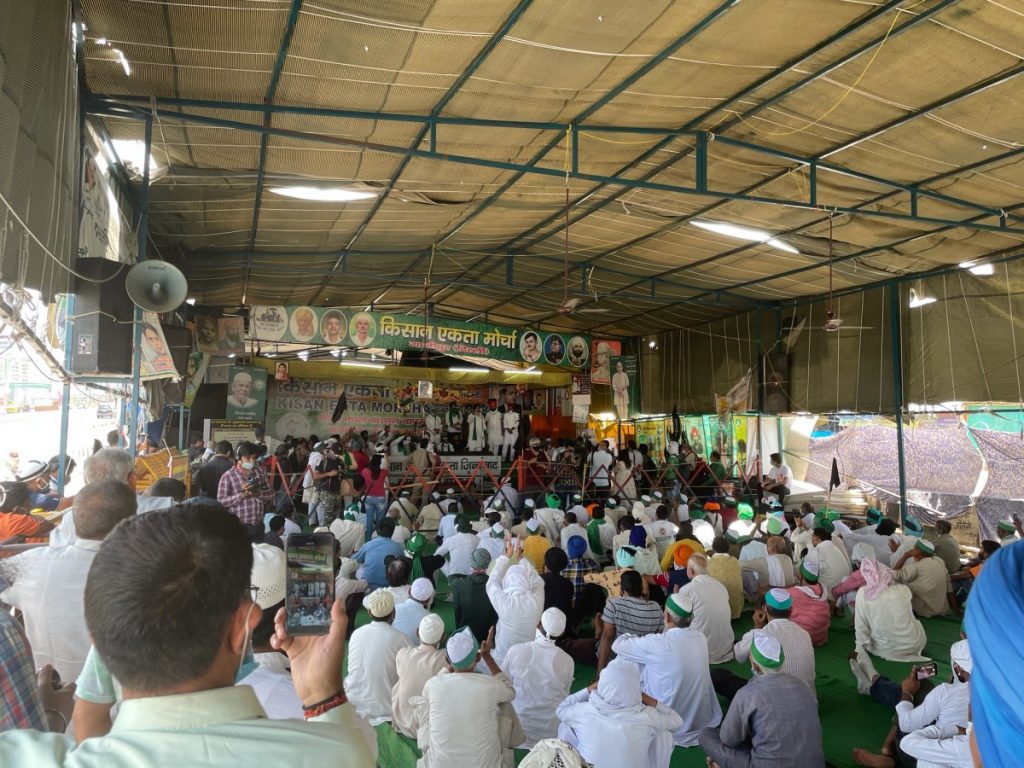 Ashq Mohammed, a white bearded farmer from Muffarnagar agreed. “Modi has caught us, before the coronavirus did. We will die of debt and destitution before the diseases comes to us. There is nothing left for us. Our children have no option but to leave farming. Plus there are no job too, where do we go?” he said.

Despite the trouble and heavy deployment of police, black flags hurled all day. The evening brought more people to the camps and celebration continued.

BKU’s UP state president Rajbeer Singh explained, “This is a farmers’ revolution dedicated to bring a radical paradigm shift. Unlike other revolutions in India, we are not for regime change. We are apolitical. We want fair prices for our farmers, and rooting out of exploitative systems, that have kept our farmers in misery.”