After 140 Hours of Walking, Maharashtra's Protesting Farmers Arrive in Mumbai

Opposition party leaders in Mumbai have extended their support to the farmers. Mumbai: “Let us take a break now. We have been walking for nearly two hours without a break,” said Dhanaji Havate. “That is fine. Let us walk till we reach that fly-over bridge and we can sit under it. Hurry up now,” replied Khandu Sampat Pawar, as both friends walked past Kannamwar Nagar in Vikroli.

Havate and Pawar belong to an Adivasi Mahadeo Koli community from Shindwad village in Dhindori taluka of Nashik and have been walking among the 35,000 farmers, essentially all Adivasis, from Nashik to Mumbai since March 6. The march entered its final and most significant leg on Sunday. On March 12, the marchers are planning to surround the Vidhan Sabha in south Mumbai, blocking off access, and urge the government to meet their demands. 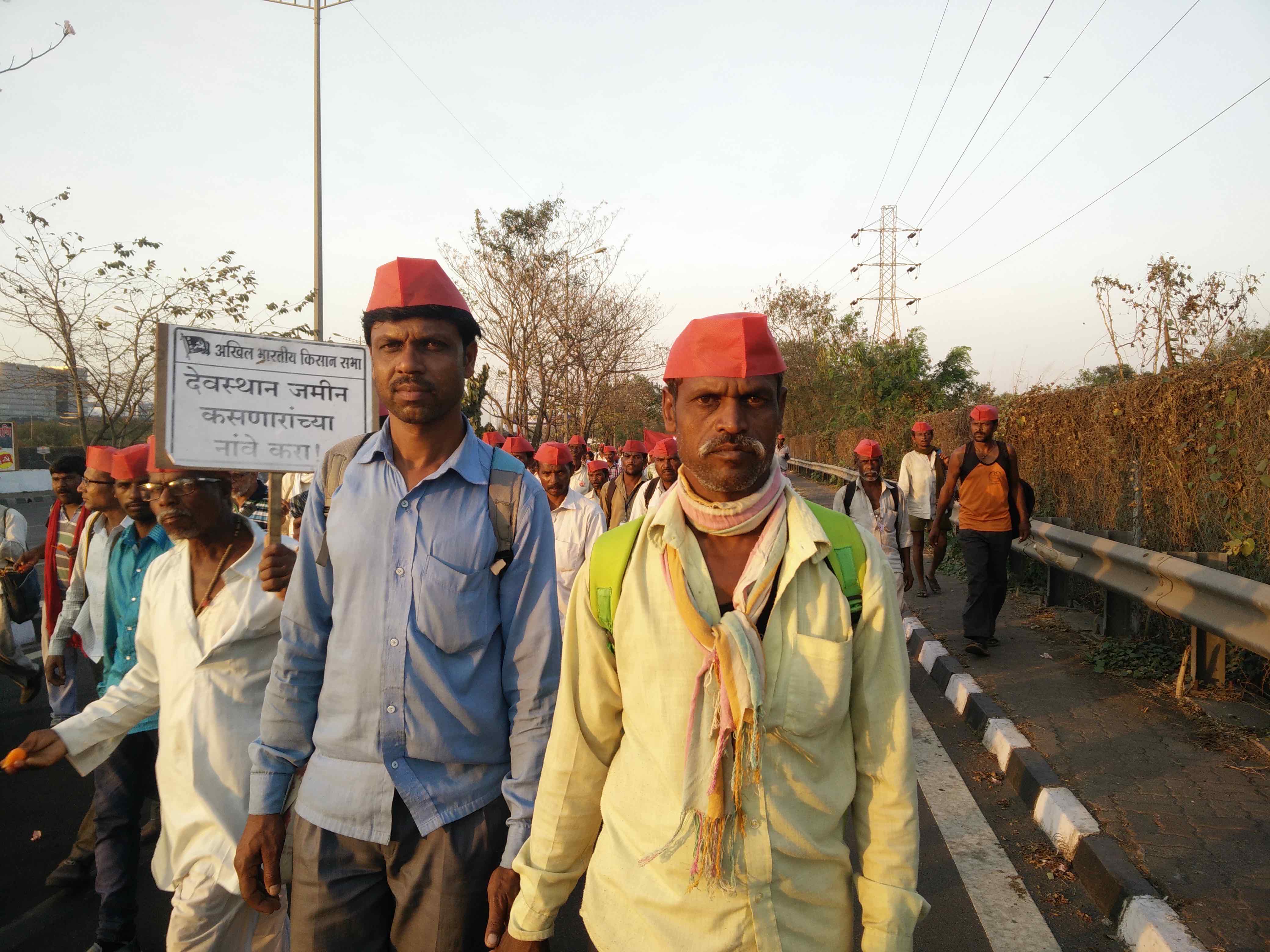 The rally organisers had originally decided to walk the final leg of the march on Monday morning. But it was decided after consultation with the march leaders that they would walk at night. “It is the exam season. We are afraid school and college children might face inconvenience. So, we decided to walk during the night,” said Khandrav. The final leg of the march was completed with very little sleep and rest, and the protestors arrived at south Mumbai’s Azad Maidan early in the morning.

The farmers’ “long march”, called by the CPI(M)-affiliated Akhil Bharatiya Kisan Sabha (ABKS), was organised meticulously under the leadership of Adivasi legislator Jiva Pandu Gavit from the Kalwan constituency in Nashik. The call for the march was given nearly a month ago, with letters sent to each home urging them to join. “The letter had details of all our issues. We were asked to read it carefully and sign it,” said Pawar. “We have signed and submitted it to our vibhag pramukh,” added Havate. These letters are to be submitted to the mantralaya, they claimed.

According to them, at least one person from each household decided to join the rally. “My two children and wife are taking care of my four bigah land. We have sowed tomatoes, chillies and brinjal this time,” said Dadaji Gavit of Hatrundi village in Peth taluka, Nashik. Most farmers here have been cultivating forest land since time immemorial. “And now we want rights over this land,” announced Sagunabai as she led the women marchers from her village, Pate. Sagunabai, a land rights activist, is accompanied by 24 other women from her village. “We decided to take the lead and for a change ask the men to stay back and take care of our farms and children,” said Rukhana bai, beaming.

The farmers’ community in Maharashtra, like in most parts of the country, is not a homogenous one. Unlike the landed farmers from western Maharashtra, mostly belonging to the Maratha community, these protesters mostly belong to Adivasi groups and other Bahujan communities. Datta Bharat, a senior activist from the community who has been struggling for farmers’ rights for over four decades, told The Wire that this is no ordinary rally. “We are all Adivasis. Sons of this soil. Ask a Maratha from paschim (western) Maharashtra to join us. He never will.” 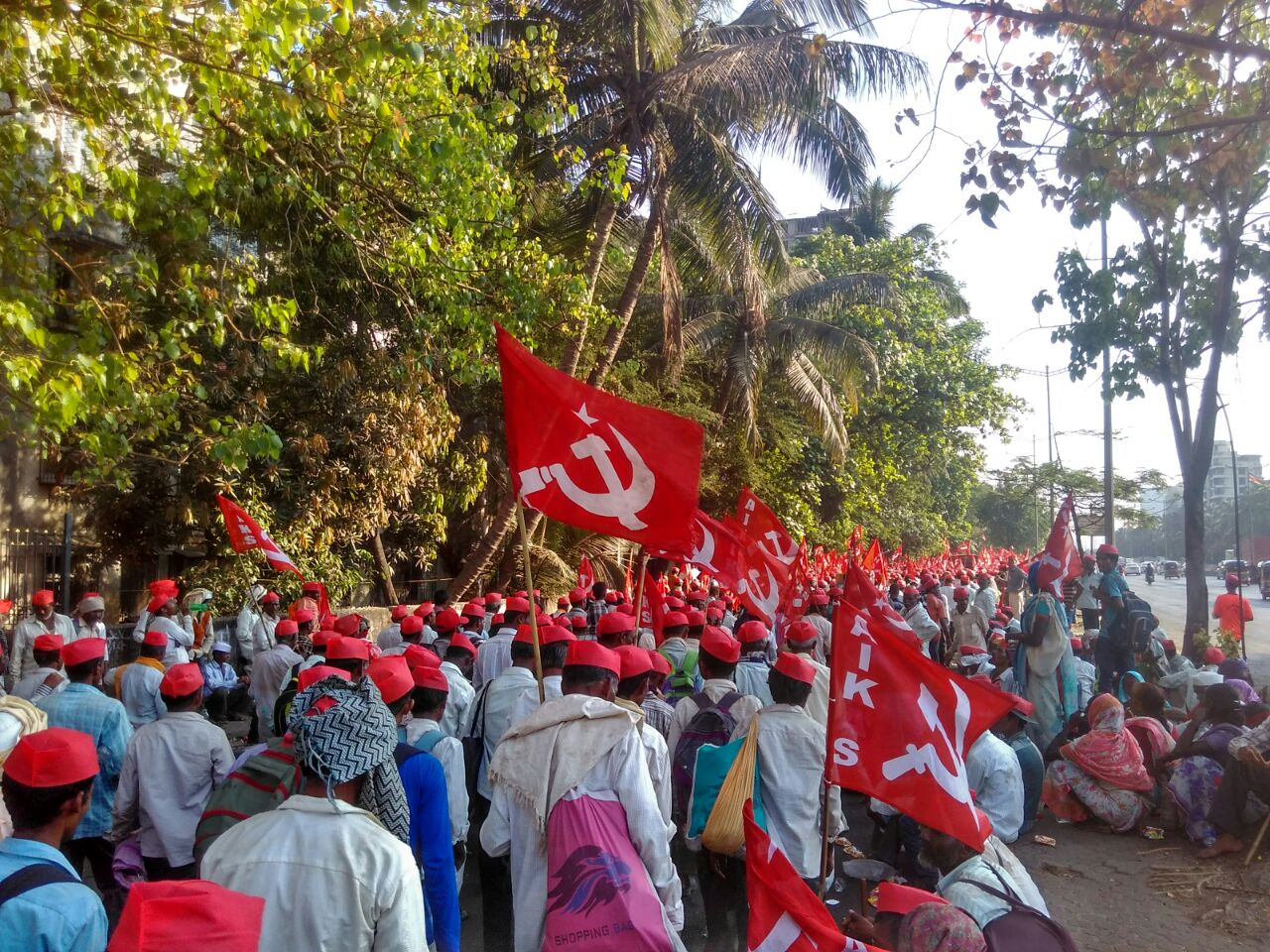 Most of the farmers marching are small-scale farmers or are landless. Others have been cultivating land which, according to the Forest Land Rights Act of 2006, should have been legally transferred to them over a decade ago, but hasn’t.

The farmers started their march from the CBS Chowk in Nashik, the location of the March 2016 demonstration in which close to one lakh farmers had gathered for two days. While most of the people marching belong to the Nashik district, as the rally progressed, Adivasi and other Bahujan farmers from Thane and Palghar districts also joined the protest.

The farmers’ main demands include a total farm loan waiver, implementation of Swaminathan Commission recommendations, transfer of forest land to those who have been tilling it for years and appropriate minimum support prices. While these were common bones of contention for every farmer who had been walking for over 140 hours, they also had area specific demands. Mahadeo Kukana, belonging to Kokna tribe from Peth taluka in Nashik, walked along with 40 men from his village, Kulwandi, with a poster demanding “replacement of torn ration cards”. “We have been seeking replacement of old, tattered ration cards for years. The fair price shop’s owner in the village refuses to let us buy our monthly provisions, claiming the cards are old and have expired. The tehsil offices don’t entertain our grievances.”

Another group held a poster demanding opening up of land reserved for temples in the village. “Our village is predominantly tribal. There are just a handful houses belonging to OBC communities. But ten acres of land has been kept reserved for temple development, while most households here are landless and do not have land for cultivation,” said Birju of Dongar koli region in Sudhagad taluka.