The toll of reverse labour migration and properly implementing social distancing methods have all made doing business harder. 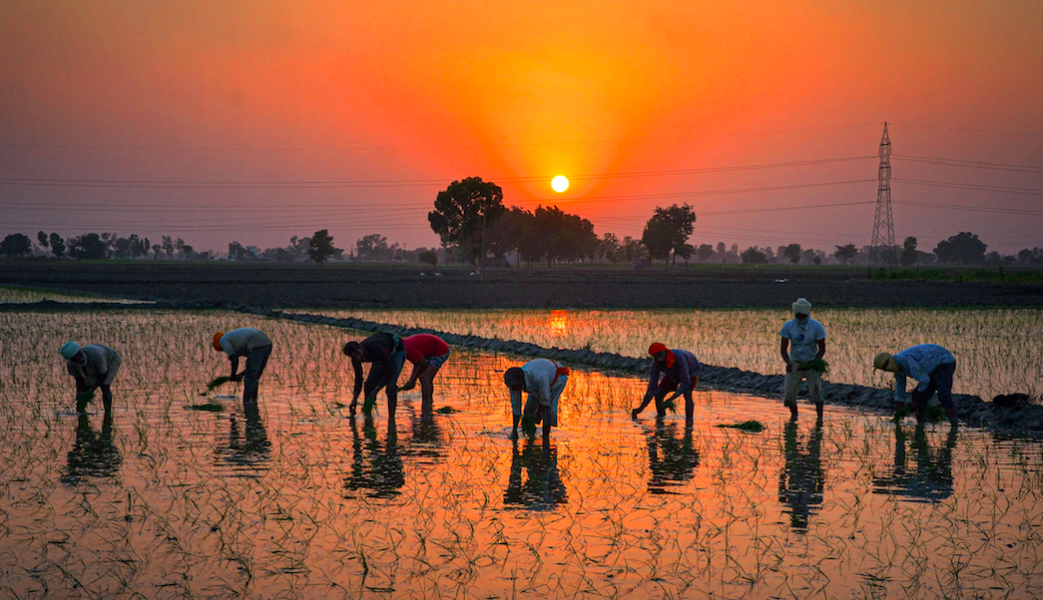 Over the last few weeks, much has been written on the nature of agri-centric “reforms” announced as part of the Narendra Modi government’s ‘Atmanirbhar’ package.

Perhaps the most prominent thread of criticism, in the immediate context of India’s farmers, was that the scale of damage caused within the production-distribution-sale agriculture network was hardly addressed by the package itself.

With the finance minister now clarifying that no new government schemes are likely to be announced anytime this year to support any vulnerable groups as India faces its own version of The Great Depression, it seems that the average farmer, at this point, remains “atma-nirbhar” without support, or aid from the government.

In this context, over the last few weeks, the research team at the Centre for New Economics Studies, spoke to over a dozen farmers across neighbouring villages in Haryana (Bidhnauli, Rathdhana, Jagdishpur, Rampur and Badkhalsa, to name a few).

These included: a curfew-style lockdown restricting mobility of all farmers to city-based mandi-bazaars; the social distancing effect making networks of local and city-supply distribution and sale extremely difficult; the reverse migration of labour.

During the lockdown, starting from mid March, many farmers were forced to reduce their daily cropping hours and faced difficulty in accessing their farm areas. This, combined with the hail storm in early March, led to a drop in yield for farmers’ produce and consequently a loss in revenue and incomes. Similarly, in adherence to new norms of social distancing, some mandi-bazaars were shut in the initial portion of the lockdown period, restricting sale networks.

Farmers from far-away villages faced difficulty in distributing and selling their stock of vegetables, fruits, tomatoes in urban-based mandis.

Ravinder, a farmer from Bhidnauli village says, “The vegetables we could earlier sell for Rs 30 per kg can now get us only Rs. 10 per kg maximum. Our yield has already dropped by at least 25%. Farmers who generally grew around 20 quintal (50 mann) of wheat have seen their yield reduced to 14 quintal (35 mann).”

Even when more mandis officially opened, as some of the farmers told us, overall demand was low and extremely volatile, forcing most farmers to sell produce for amounts as low as Rs 2 per kg. Social distancing requirements and poor healthcare safety conditions also made many retailers and wholesalers averse to visiting mandis while consumers were too afraid to buy non-packaged vegetables that resulted in aggregating the demand-shock. Also, because of inter-district and inter-village mobility restrictions, a heightened social phobia against the virus, many informal practices of daily congregation amongst members of farm community in villages remained disrupted. These congregative meetings are otherwise vital  in acting as critical knowledge-producing and sharing spaces of deliberation on farming practices, learning from each other, and on experimenting with different cropping-patterns (discussed in a study here).

Neetu, a young farmer from village Rampur has been farming since the age of 12. More than the loss of livelihood due to the pandemic-induced lockdown, he expressed extreme frustration against the local and state governments for mismanaging the response to the health-crisis that destroyed his family’s main source of income and livelihood.

He said, “Sarkaar ne hamare liye kuch nahi kiya, siraf TV pe dikhate hai sab, kisaan ke liye kuch hota nahi hai (‘The government has done nothing for the farmer, it is all a performance for the television’).” Neetu, so far, has already faced an estimated loss of around Rs 22 lakh since the lockdown began.

Unlike Ravinder, who could sell his produce at cheaper rates to middle-men and intermediaries, Neetu couldn’t arrange transport facilities to deliver the produce to mandis or get intermediaries to buy off his stock. He had to carry the crop – bottle gourd, ridged gourd and brinjal – through his own vehicle and ended up dumping almost all of the produce or leaving it for the cattle.

The reverse migration of landless workers who were earlier involved in key farming activities, especially for large farming estates, not only impacted the current yield but also the future cropping plans for most farmers.

With the absence of workers, farmers with large holdings of land have been unable to prepare their lands for the next crop. Mechanisation process (to even substitute for basic labor needs) isn’t easy, nor can be done overnight by most farmers. Machines cost almost Rs 12 lakh and are out of farmers’ investment budgets.

Further, faced with concerns of labor shortage, lack of storage facilities in villages, and the added effect of weak aggregate demand, we saw many farmers choosing not to crop over the next cycle. While it is too early to cite detailed data on this, it isn’t hard to predict the grave effects this can cause on the supply of essential crops (wheat, rice) and other commercial-produce (fruits etc).

Only vegetables that were being sourced to private contractors have retained some yield. A lack of daily-wage workers (including mostly migrants from Bihar, Uttar Pradesh) has significantly changed the farming pattern and preferences of farmers. Farmers are now sowing seeds without transplanting them in seed-bags to reduce the input and production costs. This is likely to have effects on the quality of vegetables produced and could increase the risk of weed attacks on the plant according to Virendar, a farmer from Badkhalsa.

According to Virendar, the threat from weed-attack is likely to further accentuate costs and lead to greater expenditure on weedicide (at a time when prices of fertilizers and pesticides are higher due to unavailability).

So, what has the government done to address some of these grave concerns?

In our interactions, most farmers complained of having received no direct income support or insurance cover claim for the lost produce. The Kisan Credit Card holders, who are eligible for risk-coverage, are still unable to get their crop-damage assessment completed through insurance authorities. Coupled with bureaucratic hurdles and dysfunctional servers in government banks, farmers are less hopeful of any formal risk coverage payments, or in terms of allocation of credit to help them minimize their losses.

Some farmers with wheat and rice produce were able sell their produce to the government at a lower MSP than before in the first few weeks of the lockdown.

According to a farmer from Rathdhana village, “From every quintal, we saw a loss of Rs 14 at least.” However, for small-scale and marginal farmers, like Rajbir Dahiya from the village Badkhalsa, getting basic services from the government and the MSP for listed crops has been difficult. Rajbir says that services like MSP and insurance-coverage exist merely on paper (‘kaagzi khaate’).

For farmers like Rajbir, the only source of income has been the monthly sum of Rs 2,000 (PM-Kisan) promised to farmers with less than 5 acre of land. While getting access to the funds has been difficult for the non-Jan Dhan account holders and incoming payments seem to be delayed, this sum still has been the only source of income support and relief during lockdown. But it is important to note that the low denomination of the sum has made it irrelevant for farming families like that of Neetu and Rajbir who have larger families to take care of.

At the same time, there are those who argue that there is less faith to be put in the government for providing help. Mr. Virender, a leader in the Bhartiya Kisaan Sangathan, shares a contrarian view, says: “We cannot rely on the government for everything. We have to mobilise and take the situation in our own hands”. Virender been working on issues like sustainable water-usage, reduction in pesticide use, promotion of efficient farming practices for the past 15 years.

He adds on to say: “Many of our fellow farmers don’t have a day-to-day schedule for farming and cropping. Sometimes they spend all their times on the field and sometimes too little. They fail to adopt newer technologies like weather prediction information available on Google, which makes cropping processes more inefficient. We want to spread awareness and collectivise farmers to make our voices heard. But we shouldn’t demand freebies like loan waivers. Instead, we expect interest rebates on loans. The government’s efforts, through the PM Kisan Scheme and direct transfers of Rs. 2000 is still better than nothing”.

On being asked what the government can do, Virender says: “The average farmer is deeply frustrated (“kisaan nirash hai”). He does not have cold or proper storage facilities for most vegetables and commercial crops. Farmers that grew crops requiring large initial investments are especially suffering and more needs to be done to provide direct aid to them”.

Virender’s fellow farmer friend, who grew musk-melon in his 12-acre long farm, lost nearly Rs 4-5 lakh of initial investment as the crops failed to be sold. Such farm experiences are also leading to dismal future expectations amongst the farm community where given a choice more than 90% respondents said they would leave farming (or wouldn’t want their children to be farmers). On a question about exploring other sources of income, farmers claimed that in the anticipation of recession, they are unwilling to invest in any asset (financial or otherwise) whatsoever.

Also read: The Rumours that Killed the Chicken and the Maize

There has also been a significant damage to the agri-business network due to a pre-existing demand-side contraction- as seen even before the pandemic. Farmers, earlier processing farm-produce to sell sauces, purees and corn-cans, have been in a fix as primary sources of demand for their products has been eliminated. Elaborate events like marriages and places like hotels and restaurants have been deeply affected by the lockdown. As they also seem to be the last to restart and reopen, agro-businesses will continue to bear the brunt of a slowing economy.

As a result of all these changes, many farmers, like those in Badkhalsa (Sonepat) are trying to localise their supply chains and produce safe crops for getting MSP to break-even. As most governments do not procure vegetables at support prices, many vegetable growers are shifting to wheat and rice for some income.

The skewed production and an over-supply of wheat and rice -over others, is likely to cause a future glut in the market, with shortages of vegetables disrupting the market further. One needs to keep a close eye on prices in the food-basket where deflationary and inflationary spells are likely to co-exist at the same time in months to come.

In terms of preparedness against the pandemic and the virus itself, it was reassuring to see almost all interviewed respondents emphasize on the need to ensure social distancing, restrict long-distance movement for farmers to sell their produce and develop more localised channels of distribution. The key concerns however are: weak demand and a poor infrastructural capacity to manage distribution-sale at local levels to those willing to buy commercial crops (including vegetables, fruits). 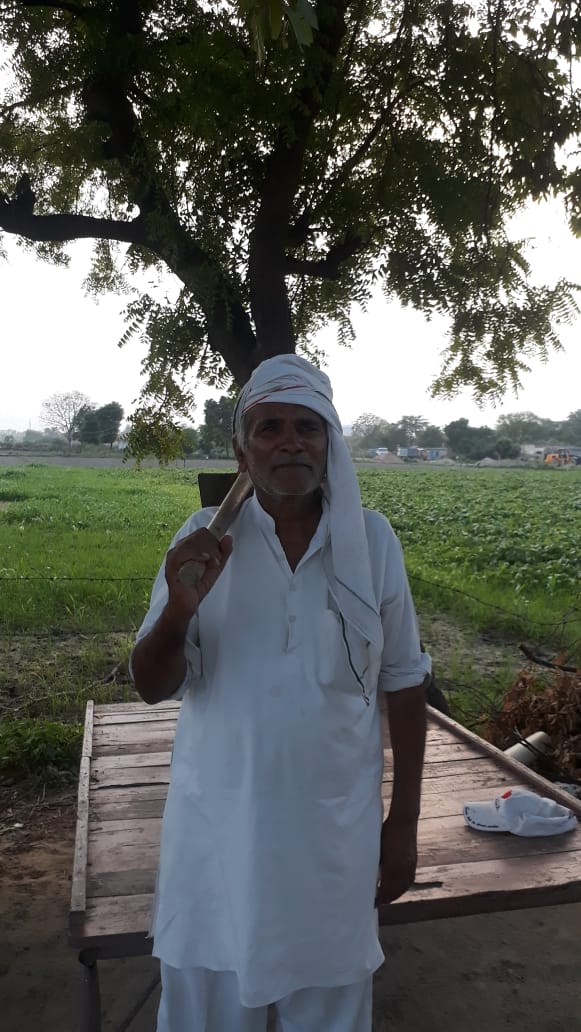 Villagers in Badkhalsa, Rathdhana, Jagdishpur also remarked that they, along with local ASHAs and rural healthcare facilities are trying to do everything to maintain a low spread of the virus by inducting a routine for regular hand-washing, maintaining social-distance at the farm and mandi area.

However, smaller villages like Rampur have not seen a stark change in their healthcare practices. Farmer Neetu from the village said, “The mask costs Rs 20 a piece, which many can’t afford, and with greater fear against the virus, we are likely to suffer for long”.

Dahiya, another farmer from Badkhalsa summarised the village’s outlook towards the pandemic stating: “Haemin sirf punji aur shareer bachana hai (we only need to save our earnings and bodies during this time)”.

In Dahiya’s words, all farmers, without the support of the local and state governments, are atma-nirbhar, not by choice, nor an enhancement of capabilities, but due to a condition created from a mismanaged and poorly administered crisis that has disproportionately affected and disempowered India’s farmers in agri-centric states like Haryana.

Note: Names of some primary respondents (farmers) have been changed in the article to protect their identity.