Xi sees himself as the last soldier and saviour of Communism in China, given that the Party has been led into a quagmire of corruption, both material and ideological. 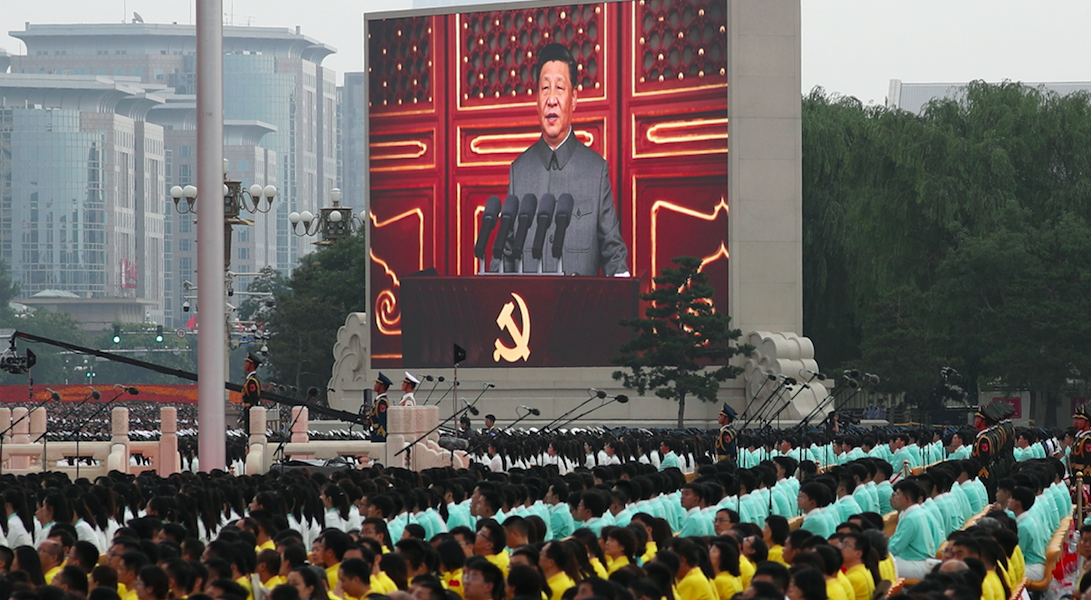 Chinese President Xi Jinping is seen on a giant screen as he delivers a speech at the event marking the 100th founding anniversary of the Communist Party of China, on Tiananmen Square in Beijing, China July 1, 2021. Photo: Reuters/Carlos Garcia Rawlins

The “Core” of the Party (Dang de hexin) is a title designating Xi Jinping since 2018, soon after he rescinded the obligatory two-term model of governance that Deng Xiaoping established in 1978, via a constitutional amendment during the 18th Party Congress. Why did Xi choose to disrupt a system and transitions of power that had been operating smoothly for more than three decades? Why has he chosen to anoint himself a leader cast in the mould of Mao Zedong and move away from the collective leadership model espoused by Deng?

Deng’s model ensured China underplayed its one-party dictatorship and allowed the West to close its eyes to the continuing and draconian surveillance regime, the discipline and punish charter of social transformation put in place by Mao and his internal police. Why has Xi sought to curtail the power and freedom of capital investment and cage its larger-than-life billionaires?

Analysing Xi’s policy turnarounds and his quest for complete control have become an industry amongst China watchers, particularly in the wake of – apparently baseless – coup rumours. Scholars largely agree that Xi sees himself as the last soldier and saviour of Communism in China given that the Communist Party has been led into a quagmire of corruption, both material and ideological. He sees this “ideological” correction as imperative if the Chinese Communist Party (CCP) is to survive into the 22nd century.

Xi’s own experience starts as a Princeling living in guarded compounds in Zhong Nanhai, the residential and work quarters of the CCP top echelons. His father, Xi Zhongxun was secretary general of the state council from 1954-1965, a comrade in the arms of Mao, and at one time, even vice premier of China. He was amongst the first top tier that was purged during the Cultural Revolution of 1966.

Xi found himself designated a “sent down youth”, transported to the remote village Liang Jiahe in the northwest of China’s Shanxi province. The Cultural Revolution ended in 1976 and Xi’s father and other leaders were soon rehabilitated, giving Xi a new lease of life, a life of supreme power. Today, the cave where Xi lived and mused about his future, the hills where he tended sheep, encompass a museum and is a pilgrimage site for CCP cadre.

Xi has dedicated his reign to reinvigorating the principles and ideology of Communism. At one point, he is supposed to have said, “Why did the Soviet Union disintegrate? It is because their principles and convictions wavered.” He has vowed that this will not happen in China.

He sees himself as a man of destiny, one who will fulfil the commitments made by his Communist forefathers. These include a moderately prosperous society (xiaokang shehui) and above all the territorial unification of all China’s claimed territories, including Taiwan, Arunachal Pradesh (parts of Southern Tibet) and the South Sea islands to begin with.

Xi’s cohorts argue that for Communism to survive in China, a strong leader with will is needed and Xi sees himself in that role, hence the need to do away with term limits on holding power. Of course, others have argued that Xi models himself on Putin and further on Mao, a champion of the non-Western world.

Yet others have argued it’s an old grudge against Deng who never credited his father as being the true original reformer, in that he was tasked with the setting up of Shenzhen as a Free Trade Zone. His pushback at the Deng model as a whole is also seen as an inner-party struggle, the opposition represented by the group known as the Jiang Zimin faction, the ex-president of China from 1989-2002.  Whatever the reasons, Xi has succeeded in changing the narrative of China’s political economy. 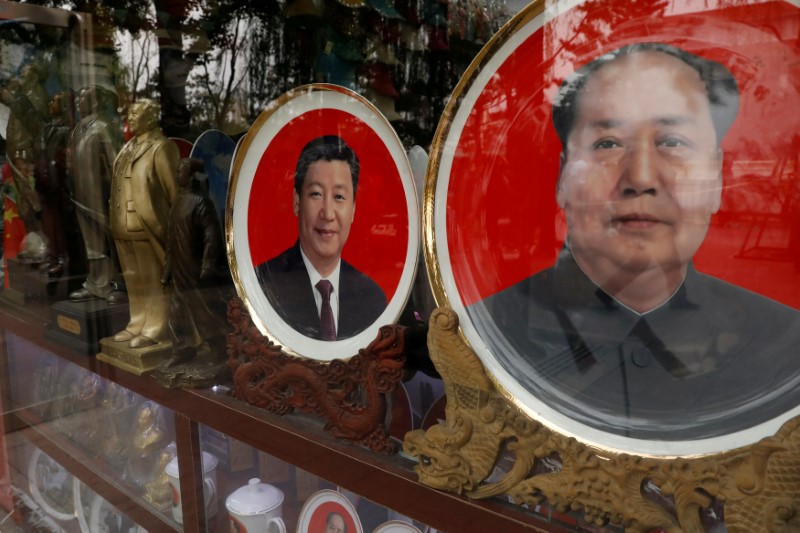 Three important new directions can be identified. The first is Xi’s attitude to wealth and the role of the private sector. Xi seems to believe that Deng’s goal of increasing wealth and prosperity and allowing some to get rich quickly was necessary while China’s productive forces still needed to be developed.  Today, this goal has been achieved, with China now the largest economy in the world in purchasing power terms.

Thus, it is now time to tackle the “new contradictions” that have emerged during the reform process. This includes rising inequality and corruption. He has put both at the centre of his domestic political agenda.

This has meant the anti-corruption campaign was also designed to take down his rivals like Bo Xilai and Zhou Yongkang, and Generals and other seniors seen as drawing influence from the Jiang Zimin faction (the tigers) and more than 100,000 cadres (the flies).

The axe has also fallen on China’s millionaires with the slogan of “common prosperity”. Control over capital and financial markets has been taken back from the private sector and fortunes have halved if not vanished. While a market economy is to continue, Xi has argued for the state sector and state sector enterprises to once again capture the “commanding heights”.

The crisis in the real estate sector, the bank fraud scandals and the overall pushback at the private sector through the curtailment of international IPOs, etc., have destabilised private enterprise in all fields. The rolling COVID-19 lockdowns in major industrial cities like Shanghai, Chengdu, Shenzhen, Guangzhou, etc., have exacerbated the situation. Unemployment is at an all-time high and GDP growth rates have slowly moved downwards every quarter.

This policy-induced downturn has meant a greater focus on “ideology” and the creation of a Xi cult, the second major change. Forcing people to suffer material hardship in the name of revolution and the wider goals of the leadership has been an old staple of the Communist Party. The focus on ideology encompasses all tools of knowledge making and dissemination, from control over the internet, social and traditional media channels, television and all other networks.

The five Mao army of “little pinks”, as they are called, comb the internet to identify any anti-CCP propaganda. The nation and the CCP are seen as the same entity, thus any attack on the CCP is an attack on China. Academic institutions have also suffered ideological tightening. The access to Western journals and resources, scholars’ ability to carry out excellent case studies on the impact and result of economic reform, and huge international research projects and exchanges are now a thing of the past.

The emphasis is once again on a party-led curriculum, politically correct and supportive of the Marxist paradigm in all aspects of the social sciences. Meiyou gongchandang, meiyou xin zhongguo (No CCP would mean No New China) is back as the overall mantra and Xi Jinping Thought, the new bible. COVID-19 controls over the last three years have helped cement regimes of surveillance and control even further.

The third visible change from Deng’s period has been in foreign policy, where China has gone from a doctrine of bide your time and hide your power to “it is time to exercise our ‘comprehensive national power'” to shape its neighbourhood and international institutions. Propaganda says “Mao made us stand up, Deng made us rich, Xi is making us strong (Mao ba women zhanqilaile, Deng ba women fuqilaile, Xi ba women qiangqilai)”.

China’s One Belt One Road, Xi’s signature policy, is meant to combine the heft of China’s economic integration as the largest trading partner across the world with the need to protect its economic outreach and hence, its need for a strong blue water navy and military outposts across the globe.

China has leveraged its economic loans for infrastructure development to acquire territorial rights and Sri Lanka giving China a 100-year lease on its Hambantota port is a perfect example of its ‘geo-economic’ strategy. Similarly, its growing aggressive posture in the South China Seas and the constant threat of war with Taiwan are calculated to spell out China growing strong military capabilities and announce its intention of guarding its ever-expanding “core security interests”.

Xi’s presidency for life, thus, comes with a crown of thorns, beset as he is with domestic economic issues of great magnitude and a concerted pushback at the international level as America defines China as its biggest challenge and moves to consolidate alliances to offset China’s rise. Whether Xi receives the mandate of heaven and continues to rule the waves remains to be seen.

Ravni Thakur is with the Department of East Asian Studies, Delhi University.