Daily protests have rocked Kenosha since the police shooting of Black man Jacob Blake, 29, on the weekend. 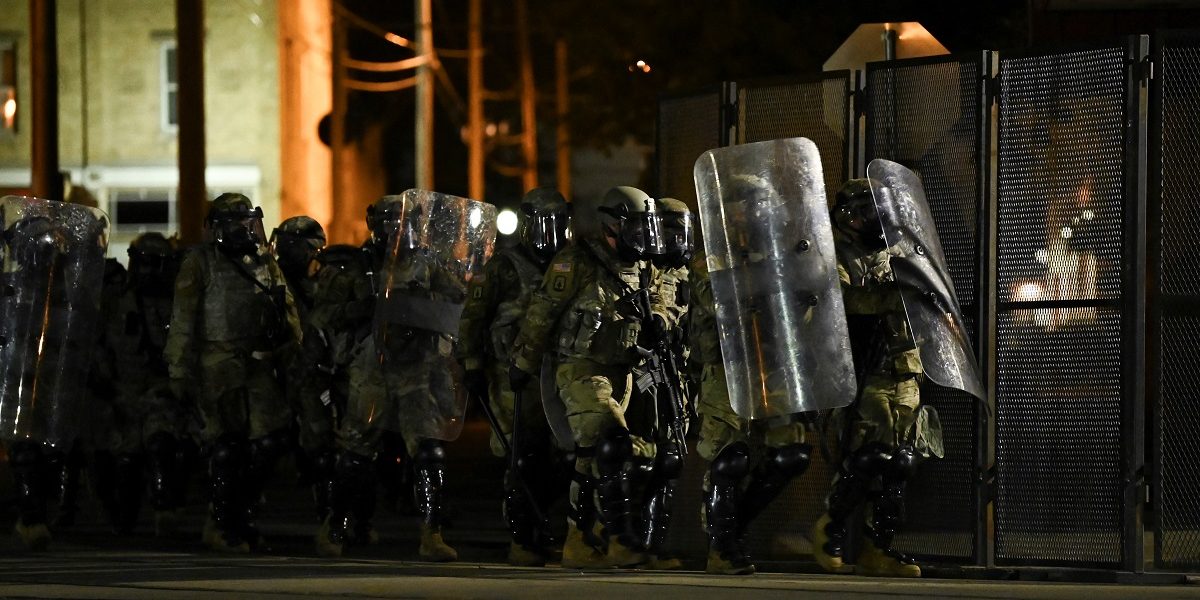 Police in the neighbouring US state of Illinois arrested a 17-year-old on Wednesday after two people were fatally shot and a third was wounded during unrest in Kenosha, Wisconsin, authorities said.

“The suspect in this incident … is currently in custody of the Lake County Judicial System pending an extradition hearing to transfer custody from Illinois to Wisconsin,” they added.

Daily protests have rocked Kenosha since the police shooting of Black man Jacob Blake, 29, on the weekend.

On Tuesday night, two people were shot dead amid clashes between protesters and apparent vigilantes. Video footage posted online shows a young white man with a semi-automatic rifle appearing to shoot at protesters. The recording also shows the shooter walking down the street as police vehicles drive past him.

Officials said early Wednesday that there were multiple shots fired before midnight, and that an investigation was underway.

The National Basketball Association (NBA) postponed three playoffs games after the Milwaukee Bucks refused to play against the Orlando Magic in protest over racial injustice.

“We’re tired of the killings and the injustice,” Bucks player George Hill was quoted by The Undefeated website as saying after the team’s no-show at the court.

The Bucks’ unprecedented boycott of the NBA playoffs — one of the largest US sporting events —forced the league to scrap all of Wednesday’s games.

The team’s senior vice-president backed the players’ decision to boycott the game in a tweet.

Some things are bigger than basketball. The stand taken today by the players and org shows that we’re fed up. Enough is enough. Change needs to happen. I’m incredibly proud of our guys and we stand 100% behind our players ready to assist and bring about real change

Players and coaches across the league have expressed disgust at the police shooting of Jacob Blake.

Los Angeles Lakers superstar LeBron James voiced solidarity with the decision in a tweet shortly after the Bucks boycott. “We demand change. Sick of it,” he said.

According to US media reports, the Milwaukee Brewers have also refused to play their Major League Baseball game against the Cincinnati Reds on Wednesday. Other MLB teams were reportedly considering calling off their games as well.

The Kenosha demonstrations have mostly drawn peaceful protesters, but some groups have clashed with police and vandalised buildings and businesses at night.

On Wednesday, President Donald Trump announced on Twitter that Wisconsin had accepted offers of federal assistance to restore order.

“TODAY, I will be sending federal law enforcement and the National Guard to Kenosha, WI to restore LAW and ORDER!” Trump wrote, again leaning on the 52-year-old campaign slogans of Richard Nixon from 1968.

…TODAY, I will be sending federal law enforcement and the National Guard to Kenosha, WI to restore LAW and ORDER!

Democratic Wisconsin Governor Tony Evers, who had already declared an emergency over the unrest, said he had authorised the deployment of 500 members of the National Guard.

“A senseless tragedy like this cannot happen again,” Evers said. “I again ask those who choose to exercise their First Amendment rights please do so peacefully and safely, as so many did last night. I also ask the individuals who are not there to exercise those rights to please stay home and let local first responders, law enforcement and members of the Wisconsin National Guard do their jobs.”

Police shot Jacob Blake multiple times in the back at close range on Sunday, leaving him paralysed, his lawyers said. The incident, captured on video, sparked renewed protests over racial injustice and police brutality in the US.

Anti-racism demonstrators also took to the streets in Portland, Oregon and Louisville, Kentucky on Tuesday night, a continuation of the nationwide Black Lives Matter protests ignited by the police killing of Black man George Floyd in Minneapolis on May 25.