"If Obama grants Manning clemency Assange will agree to US extradition despite clear unconstitutionality of DoJ case," WikiLeaks has tweeted last week. 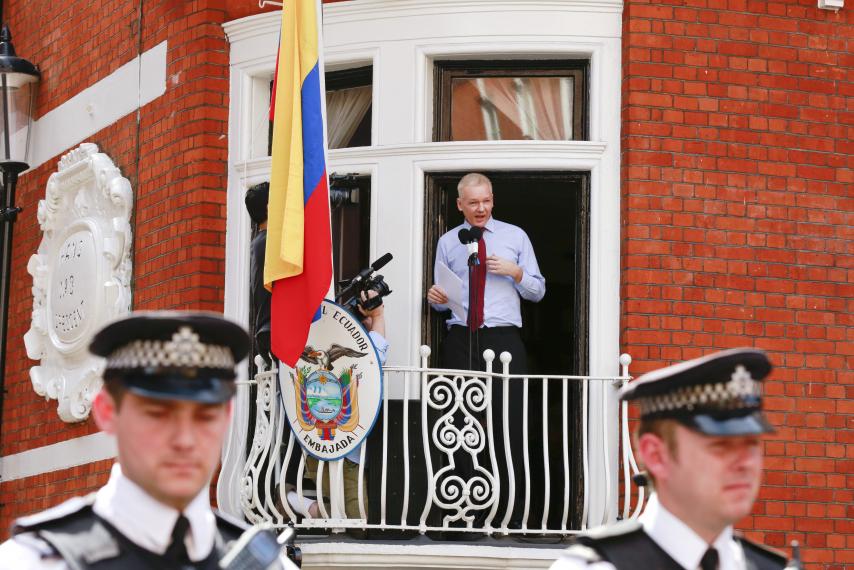 File photo of Julian Assange at the balcony of the Ecuadorian embassy in London. Credit: Reuters

Paris: WikiLeaks founder Julian Assange retreated from his pledge to accept extradition to the US if Chelsea Manning was granted clemency, arguing Wednesday via his lawyers that what he was really asking for was an immediate pardon for the ex-Army analyst.

It was only last week that Assange raised eyebrows across the internet when he appeared to offer himself up as a kind of swap for Manning, the former private convicted of leaking the hundreds of thousands of documents that made WikiLeaks a household name.

If Obama grants Manning clemency Assange will agree to US extradition despite clear unconstitutionality of DoJ case https://t.co/MZU30SlfGK

“If Obama grants Manning clemency Assange will agree to US extradition despite clear unconstitutionality of DoJ case,” WikiLeaks said, apparently referring to the US Department of Justice’s continuing investigation into the radical transparency website.

But when Obama granted clemency to Manning on Tuesday, setting a May release date that lops almost 30 years off her sentence, Assange’s lawyers said it wasn’t enough.

“There’s no question that what President Obama did is not what Assange was seeking,” said Barry Pollack, who represents the WikiLeaks chief in US. “Mr. Assange was saying that Chelsea should never have been prosecuted, never have been sentenced to decades in prison, and should have been released immediately.”

Melinda Taylor, who also represents Assange, agreed, saying in an email that clemency was “far short of what Mr. Assange asked for and what Ms. Manning deserved (which is to be pardoned and freed immediately).”

Neither supplied any evidence that Assange had used the words “immediate” or “pardon” in relation to his extradition offer, but Pollack said it was clear that was what Assange meant – noting that the Australian computer expert had previously pushed for Manning’s pardon.

“Why would he be called for Manning’s release in a few months from now?” Pollack said. “You can parse his tweets any way that you want to parse them. I think his position has been clear throughout.”

Critics of Assange had a field day, accusing him of dishonesty or using Manning’s case to win publicity. “Julian Assange back pedals on Extradition Promise in Record Time,” read one headline in tech website Gizmodo.

It’s not the first time Assange’s pronouncements in relation to Manning haven’t quite worked out as advertised.

In December 2010, journalists revealed that WikiLeaks had failed to honour a pledge to help support Manning’s legal defence fund. It was only after the story was aired in the media that WikiLeaks paid up, reducing its expected contribution from $50,000 to $20,000 and then finally to $15,100, according to press accounts at the time.

Even earlier, in June 2010, WikiLeaks said that claims “that we have been sent 260,000 classified US embassy cables are, as far as we can tell, incorrect.”