Protesters in Thailand are demanding changes to the power structures in the country, including a reform of the monarchy – a topic long deemed unmentionable. 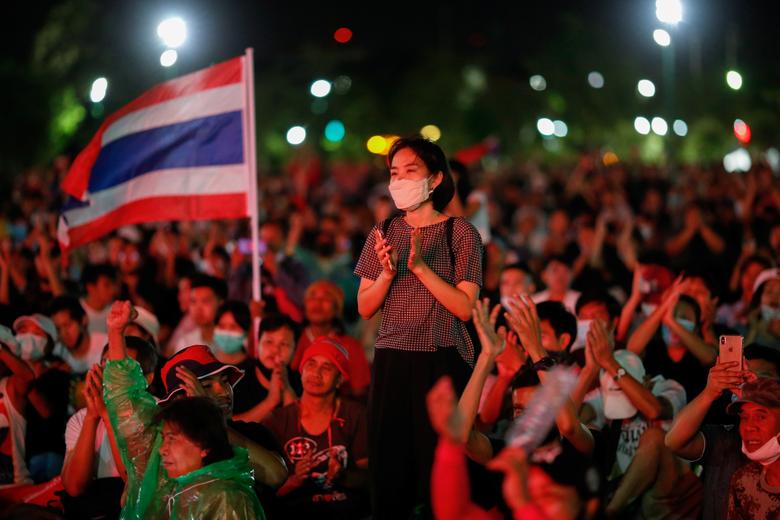 Pro-democracy protesters attend a mass rally to call for the ouster of Prime Minister Prayuth Chan-ocha's government and reforms in the monarchy, in Bangkok, September 19, 2020. Photo: Reyters/Soe Zeya Tun

Thousands of Thai students turned out over the weekend to protest in Bangkok — the latest gathering in a long-simmering movement against the power structures that hold sway in Thailand.

The three core demands of students are to dissolve parliament, amend the constitution and for the government to stop harassing dissidents and others.

The protests began in January, took a break during the COVID-19 outbreak and then resumed in July.

One of the triggers was the disappearance and apparent abduction of political activist Wanchalearm Satsaksit in Cambodia on July 4.

More broadly, protesters are angry at the perceived illegitimacy of the government (headed by the leader of the 2014 coup Prayuth Chan-ocha), the dissolution of leading reform party Future Forward and the government’s performance in handling the economic impacts of the coronavirus. Pro-democracy protesters attend a rally to demand the government to resign, to dissolve the parliament and to hold new elections under a revised constitution, near the Democracy Monument in Bangkok. Photo: Reuters/Soe Zeya Tun

In the past month, protesters have also begun demanding reform of the monarchy — a topic long deemed unmentionable in a country with strict laws against criticising the royal family.

Where the protests go from here remains to be seen, but so far, the government has exercised relative restraint toward the gatherings, preferring to arrest leaders one by one away from the demonstrations and avoid street clashes.

But the protesters have made one thing clear: they will no longer be ruled by fear. And some believe the public airing of grievances about the monarchy marked a turning point.

Why symbolism matters in Thailand

The weekend protests were heavy on symbolism. They were held at the Royal Plaza, commonly known as Sanam Luang, which has been used for decades for both royal ceremonies and activities such as kite flying. It has also been an important site for exercises of power and protest.

Public access to Sanam Luang has been restricted in recent years, so to reclaim the square was itself a highly meaningful gesture.

The protesters also staged a ritual: the laying of a new People’s Plaque in the square. The new plaque read

at this place the people have expressed their will: that this country belongs to the people and is not the property of the monarch, as they have deceived us.

To appreciate the significance, some historical context is important. The original People’s Party Plaque was laid in 1936 to commemorate Thailand’s the abolition of the absolute monarchy and the establishment of its first constitution four years earlier. It read:

Here, at dawn on 24 June 1932, the People’s Party has brought forth a constitution for the progress of the nation.

This plaque disappeared mysteriously in 2017, shortly after the death of Thailand’s long-serving and much-revered king, Bhumipol Adulyadej, and the instalment of his successor, Crown Prince Vajiralongkorn.

In laying the new plaque over the weekend, the protesters invoked the spirit of all Thais who had fought for democracy in the past, including the revolutionaries Pridi Banomyong and Phibun Songkram.

They also included representations from minorities, such as the LGBTI community, and those from Thailand’s northeast and far-southern provinces. These groups are widely believed to have been disenfranchised under Thailand’s military government and its creeping authoritarianism.

The plaque itself displayed the three-fingered “Hunger Games salute”, widely used by protesters since the 2014 coup and representing the values of freedom, equality and brotherhood/sisterhood.

The new plaque was not long for Royal Plaza, though. Within a day, it had
been quickly removed and replaced with cement.

Worries about erosion of democratic freedoms

There has been increasing unease among younger Thais at these clandestine efforts by the military-backed government to erase the memory of Thailand’s democratic birth.

The younger generation voiced their frustrations with the government and the eroding democratic freedoms in the country in the lead-up to the 2019 election — the first vote in Thailand since the coup.

They voted in droves for Future Forward, a party whose key message was no more coups. But Prayuth, the leader of the junta that seized power in 2014, was nonetheless chosen as the new prime minister by the parliament last June.

Future Forward was then dissolved on a legal technicality in February, suggesting Thailand is adopting the sophisticated authoritarianism of its neighbour Cambodia.

There have also been fears Thailand’s rulers are only superficially abiding by the constitution.

One example was Prayuth’s refusal to promise to uphold the constitution during his swearing-in ceremony.

This followed King Rama X’s decision to amend the constitution unilaterally after it had been approved by the people by referendum.

Where do the protests go from here?

The plaque-laying students will likely face repercussions, although they probably will not be charged with lèse majesté. Since taking the throne, Rama X has indicated a strong preference against using these laws. The government has many other legal instruments at its disposal, such as charging protesters with sedition.

While momentum for constitutional reform is starting to gather pace in the parliament, concrete action on reforming the monarchy will be slower and more difficult. The students say their wish is not for a republic, but for a monarchy above politics and below the constitution.

As the country’s next generation of leaders in waiting, it seems inevitable that change in this direction will occur.

The students are next calling for a nationwide strike on October 14, another day redolent with symbolism. It was on this day in 1973 the Thai people overthrew a military dictatorship.