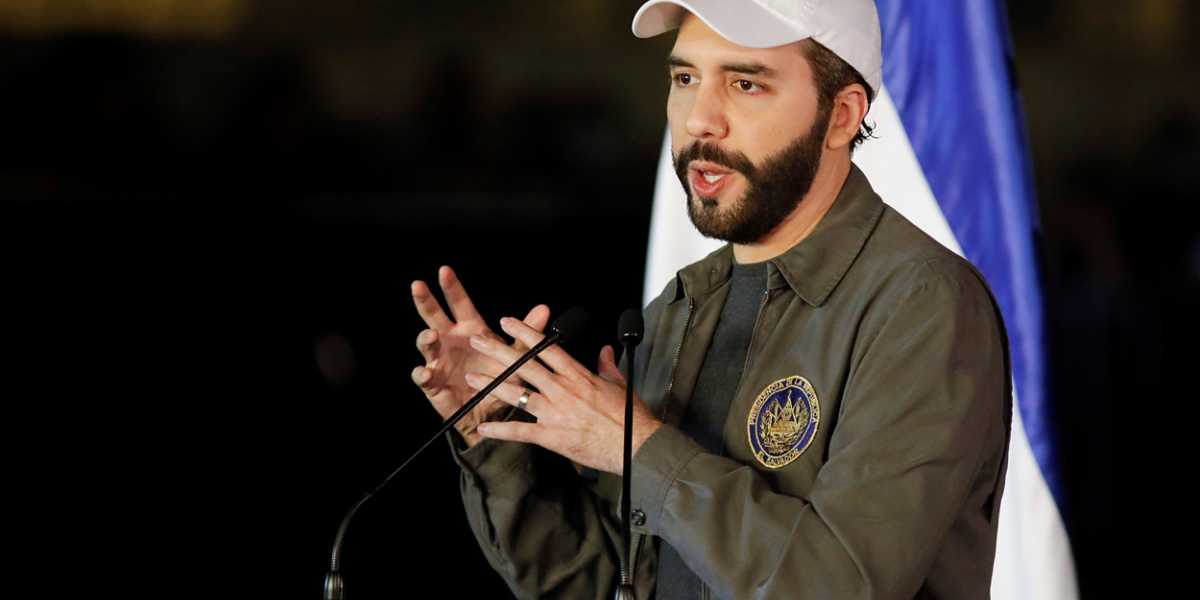 The first indication from El Salvador’s extremely online president Nayib Bukele that his country’s experiment with Bitcoin was not going well came the second week of May, in typical fashion, on Twitter. But this time it was uncharacteristically subtle: He briefly removed the red laser eyes from his avi.

The laser eyes motif, adopted by many a crypto bro on social media, had marked Bukele as a true believer. It dovetailed well with the 40-year-old’s carefully crafted public image of a hip, young, tech-savvy entrepreneur-president, which extended to his sartorial style of shades, baseball caps, and leather jackets. If this conflicted with his other image – that of an autocrat who has locked up 30,000 people in the past month and a half – his crypto fans seemed not to notice or care. Bukele would alternately identify himself on Twitter as “CEO of El Salvador,” “the world’s coolest president,” and “the coolest dictator in the whole world.”

Bukele had gone all-in on Bitcoin, turning an entire country into a cryptocurrency laboratory. Despite polls showing a clear majority of the public opposing this, the Legislative Assembly, controlled by his allies, passed a law with nearly no debate naming Bitcoin legal tender, alongside the US dollar, which El Salvador adopted in 2001. Advised by Strike CEO Jack Mallers, Bukele’s government rolled out a digital crypto wallet in app form, called Chivo (Salvadoran slang for cool), which came preloaded with $30 of Bitcoin to encourage adoption.

Many who downloaded it found it confusing and buggy, or that their $30 had already been stolen by identity thieves. A study by economists at the University of Chicago, Penn State and Yale found that of those who managed to access it, most cashed out their $30 and didn’t use Chivo again. One of them, Chicago’s Fernando Álvarez, told the tech site Rest of World, “There is no experiment where a currency was introduced with such strong incentives and it still failed.”

As El Salvador’s government found out, the problem with cryptocurrency as legal tender is the aspirational but misleading premise of the word itself. A currency, as economists understand it, must fulfill three functions: It must be a relatively stable store of value, a commonly understood unit of account, and a widely accepted medium of exchange. Bitcoin fulfills none of these. It is, like other cryptocurrencies, a speculative asset masquerading as a currency – or to be more generous, an asset whose speculated value is based in part on the promise of one day becoming a commonly used currency. But until that happens, the popularity of cryptocurrencies rests on in their highly volatile values and the get-rich-quick dreams they conjure, which cuts against the very promise of stability and future everyday use.

The bubble burst last week, as the stablecoin Terra proved to be far less stable than advertised and crashed, precipitating a wider freefall in crypto markets which wiped out $400 billion in market capitalization. Bitcoin influencers, in their usual parlance, exhorted retail investors to “HODL” and sacrifice their losses in order to shore up billionaires’ assets, a transparent pump-and-dump playing out in real time on social media. Even Bukele tweeted “Buy the dip!” – something El Salvador’s Treasury soon did. For some individuals, the crash was a devastating loss of personal wealth. For a country, the results are devastating on a much larger scale. El Salvador is on the verge of defaulting on its debts, which amount to close to 100% of its gross domestic product. This is exacerbated by the loss of value of the country’s Bitcoin holdings, which Bukele bragged he would trade with public funds on his phone while in the bathroom. As of now, he has personally cost the Treasury about $40 million – an amount equal to its next foreign debt payment, due to bondholders in June. I once joked that Bukele would either be the world’s first head of state to run a multi-level marketing scam, or the first to fall for one. It appears possible he is both.

Also read: Amid Cryptocurrency Boom – And No Regulation – What’s the Way Forward for India’s Policymakers?

Although Bitcoin was sold to the Salvadoran public as a cheaper vehicle for remittances and banking for the unbanked, the fact that it never caught on for either purpose was never the main point. Deeply indebted due to decades of fiscal mismanagement, El Salvador’s government depends on foreign capital to operate. But its bonds have fallen to junk status. Bukele has burned bridges with traditional banks, the US Treasury, and the International Monetary Fund – which has put a much needed $1 billion loan to the country on indefinite hold – over corruption. This includes likely embezzlement of COVID relief funds – likely but not proven because Bukele shut down the corruption probe and fired the attorney general investigating it.

Even before the crash, El Salvador was a bad bet for foreign lenders. The Bitcoin gambit was in large part an attempt to circumvent the global financial system and appeal directly to the crypto community as a lender of last resort. So the Bukele government hyped ever-more-incredible promises of a Bitcoin City run on geothermal power, and unveiled a crypto-backed sovereign debt instrument called volcano bonds – announced, in true crypto fashion, at a Bitcoin conference event set to AC/DC. The bond was set at $1 billion – coincidentally the same amount of the denied IMF loan – and promised to pay out a 6.5% annual interest rate after a five-year lock-in period. The terms for these fantasy bonds seemed implausible for a country whose real bonds have been downgraded by ratings agencies to ever greater depths. They had no takers, and were never rolled out.

Despite driving the country to financial ruin, Bukele remains enormously popular with voters, enjoying the highest approval rating of any Latin American president. His entrepreneurial image was real – when I was in El Salvador doing research for my doctorate, he was still mayor of San Salvador, and I lived across the street from his Yamaha dealership. But his main business was public relations, and it reflects in his social media presence and the army of social-media trolls he commands to harass his enemies. When he met Donald Trump, they instantly vibed. “President Trump is very nice and cool, and I’m nice and cool too,” he told the press at the time. We both use Twitter a lot, so you know, we’ll get along.”

Bukele has not gotten along nearly as well with the Biden administration, or with Republicans not named Trump. Since being elected president in 2019, he has steadily chipped away at El Salvador’s fragile democracy, hard won after a brutal 12-year civil war. In addition to the attorney general, he purged the Supreme Court along with a third of the country’s judges, replacing them with loyalists who greenlit his re-election, which is prohibited under the Constitution. He has spied on journalists and political rivals using Pegasus spyware. His allies in the Legislative Assembly recently passed a press-censorship law making it illegal to report on news related to gangs—such as news that the government has made a pact with the principal gangs in the country, MS-13 and Barrio 18. This pact is denied by Bukele, who has prosecuted his predecessors for negotiating with gangs as well, but has been confirmed by former government officials and by the U.S. Justice Department and Treasury, which has slapped sanctions on the government officials who facilitated it. This raises an additional possibility for the real purpose of the Bitcoin gambit, which is money-laundering and sanctions evasion – a function other pariah states such as Venezuela have tried, unsuccessfully, to pursue. One of those officials sanctioned for corruption, Bukele’s chief of staff, was also the director of the parent company of the Chivo wallet.

It has belatedly dawned on some of Bukele’s crypto fans that maybe he wasn’t kidding about the cool dictator stuff. A number of investors in El Salvador interviewed in a Politico article, including defenders of the government, asked to remain anonymous, citing the increasingly authoritarian atmosphere and “fears that merely acknowledging issues with the rollout could run afoul of a prohibition on foreigners criticizing the government.” It was, in the end, a moment of clarity that they had built a crypto-libertarian paradise in a police state. This might be entertaining, except for the fact that those who suffer the consequences will be regular Salvadoran citizens who never supported the experiment in the first place.