Why Russia and Ukraine Are Fighting for Chernobyl Disaster Site

Russian and Ukrainian forces fought on Thursday for control of Chernobyl, the still radioactive site of the world's worst nuclear accident and a factor in the collapse of the Soviet Union. 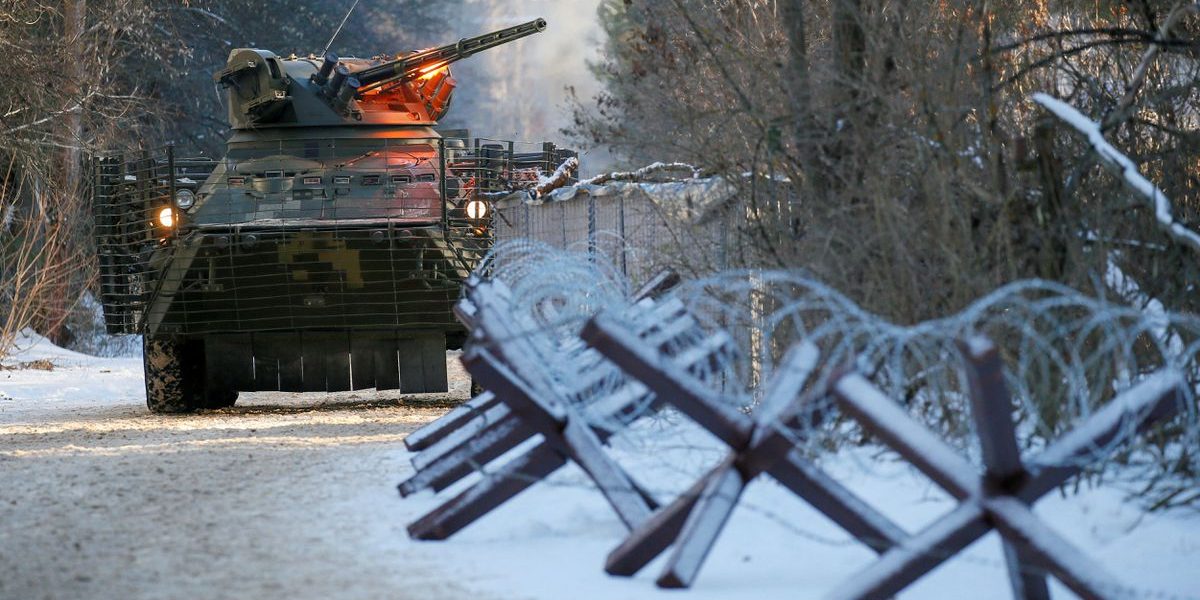 An armoured personnel carrier is seen during tactical exercises, which are conducted by the Ukrainian National Guard, Armed Forces, special operations units and simulate a crisis situation in an urban settlement, in the abandoned city of Pripyat near the Chernobyl Nuclear Power Plant, Ukraine February 4, 2022. Photo: Reuters/Gleb Garanich

Washington: Russian and Ukrainian forces fought on Thursday for control of Chernobyl, the still radioactive site of the world’s worst nuclear accident and a factor in the collapse of the Soviet Union.

“Our defenders are giving their lives so that the tragedy of 1986 will not be repeated,” Ukrainian President Volodymyr Zelenskiy tweeted before the defunct nuclear power plant, scene of a deadly fire and explosion in 1986, was captured by Russian forces.

Russian occupation forces are trying to seize the #Chornobyl_NPP. Our defenders are giving their lives so that the tragedy of 1986 will not be repeated. Reported this to @SwedishPM. This is a declaration of war against the whole of Europe.

But why would anyone want an inoperative power plant surrounded by miles of radioactive land?

The answer is geography: Chernobyl sits on the shortest route from Belarus to Kyiv, Ukraine’s capital, and so runs along a logical line of attack for the Russian forces invading Ukraine.

In seizing Chernobyl, Western military analysts said Russia was simply using the fastest invasion route from Belarus, an ally of Moscow and a staging ground for Russian troops, to Kyiv.

“It was the quickest way from A to B,” said James Acton of the Carnegie Endowment for International Peace think tank.

Jack Keane, a former chief of the US Army staff, said Chernobyl “doesn’t have any military significance” but sits on the shortest route from Belarus to Kyiv, the target of a Russian “decapitation” strategy to oust the Ukrainian government.

Keane called the route one of four “axes” Russian forces used to invade Ukraine, including a second vector from Belarus, an advance south into the Ukrainian city of Kharkiv, and a push north out of Russian-controlled Crimea to the city of Kherson.

The combined offensives amounted to the biggest attack on a European state since World War II.

Taking Chernobyl was part of the plan, and a senior Ukrainian official said it was captured on Thursday by Russian forces, though a senior US defense official said the United States could not confirm this.

The fourth reactor at Chernobyl, 67 miles (108 km) north of the Ukrainian capital Kyiv, exploded in April 1986 during a botched safety test, sending clouds of radiation billowing across much of Europe and reaching the eastern United States.

The radioactive strontium, caesium and plutonium mainly affected Ukraine and neighbouring Belarus, as well as parts of Russia and Europe. Estimates for the numbers of direct and indirect deaths from the disaster vary from the low thousands to as many as 93,000 extra cancer deaths worldwide.

Soviet authorities initially sought to cover up the disaster and did not immediately admit to the explosion, tarnishing the image of reformist Soviet leader Mikhail Gorbachev and his “glasnost” policies for greater openness in Soviet society.

The catastrophe was widely seen as contributing to the collapse of the Soviet Union just a few years later.

Acton said Russia’s capture of Chernobyl on Thursday was not to protect it from further damage, saying Ukraine’s four active nuclear power plants present a greater risk than Chernobyl, which sits within a vast “exclusion zone” roughly the size of Luxembourg.

A make-shift cover, or “sarcophagus,” was built within six months of the disaster to cover the stricken reactor and protect the environment from radiation. In November 2016, a so-called “New Safe Confinement” was moved over the old sarcophagus.

“Obviously an accident within Chernobyl would be a big issue. But precisely because of the exclusion zone, it probably wouldn’t impinge on Ukrainian civilians very much,” Acton said.

Ukraine’s four operational nuclear power plants are running safely and there has been no “destruction” at the remaining waste and other facilities at Chernobyl, the UN nuclear watchdog said on Thursday, citing Ukraine’s nuclear regulator.

Acton said Ukraine’s other reactors are not in exclusion zones and they contain nuclear fuel that is a lot more radioactive. “The risks of fighting around them are significantly higher.”