Who Was The 'Islamic State' Leader Abu Bakr al-Baghdadi?

IS rose to notoriety in June 2014, when it launched a blitzkrieg campaign and captured large swathes of territory in Iraq and Syria.

Abu Bakr al-Baghdadi transformed the “Islamic State” from an insurgent group into the global terror organization it is known as today. DW examines the life of a man who was the world’s most-wanted criminal.

US President Donald Trump confirmed media reports on Sunday, saying that the leader of the “Islamic State” group killed himself during a US military operation in northwestern Syria.

The death of Abu Bakr al-Baghdadi — born Ibrahim Awad Ibrahim Ali Mohammed al-Badri — marks a devastating blow to IS, a terrorist organisation that rose to international notoriety in 2014 by ravaging parts of Syria and Iraq.

But who was the man behind the militant group?

While his adolescence is shrouded in narratives of piety and reticence, the rise of al-Baghdadi as one of the world’s most recognisable criminals has its notable beginning in the wake of the US invasion of Iraq in 2003.

Before the ‘Islamic State’

In response to the US invasion of Iraq in 2003, al-Baghdadi formed a militant group to join a growing insurgency against the occupation.

However, in 2004, al-Baghdadi was detained by US forces and held in both the controversial Abu Ghraib and Camp Bucca detention centres. He reportedly spent more time in Abu Ghraib, which later became a symbol for torture committed by American forces in Iraq. He was released later that year with a large group of low-level prisoners.

By 2006, al-Baghdadi’s troop of insurgents joined others to form the Mujahideen Shura Council. The alliance of several Islamist militant groups later disbanded and formed an organisation calling itself the Islamic State in Iraq, commonly referred to at the time as al-Qaida in Iraq.

It is unclear how al-Baghdadi rose through the ranks of al-Qaida’s Iraqi division, but in 2010 he was declared the leader of the Islamic State in Iraq following the assassination of Abu Omar al-Baghdadi (no relation), who led the group since its formation in 2006.

As the leader of al-Qaida in Iraq, al-Baghdadi was responsible for the group’s attacks in Baghdad and surrounding areas, which included high-profile suicide bombings targeting Iraqi security services and Shiites.

Following the death of al-Qaida leader Osama bin Laden in May 2011, al-Baghdadi vowed reprisal attacks against the US and its allies in Iraq.

In October 2011, the US State Department, referring to him by his birth name al-Badri, announced that al-Baghdadi had been deemed a “specially designated global terrorist.”

Since then, the US maintained sanctions against him along with a multi-million-dollar reward for information leading to his capture or death.

Al-Baghdadi’s announcement that the Nusra Front had joined his group was contested by the Syrian group’s leader, who appealed to al-Qaida leader Ayman al-Zawahiri. Al-Zawahiri decreed that al-Baghdadi should remain in Iraq and not pursue activities in Syria, a decision that al-Baghdadi effectively ignored and that spelled the end of the Islamic State in Iraq’s allegiance to al-Qaida.

In January 2014, IS took control of Raqqa and expelled the Nusra Front from the Syrian city. The capture of Raqqa pushed al-Qaida to disavow IS in February, saying it “is not a brand of the al-Qaida group.” 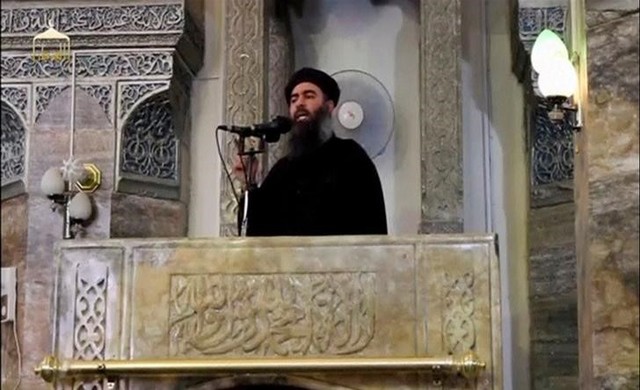 From caliph to shadows

IS rose to notoriety in June 2014, when it launched a blitzkrieg campaign and captured large swathes of territory in Iraq and Syria, culminating in the ransacking and occupation of Mosul.

On June 29, speaking from a pulpit in the historic Great Mosque of Mosul, al-Baghdadi announced the creation of a worldwide caliphate and shortened the group’s name to “Islamic State.”

However, religious leaders, mainstream scholars of Islam and the wider Muslim community have repudiated the reestablishment of the Islamic institution of the caliphate and al-Baghdadi’s claim to be caliph.

Since that public announcement, al-Baghdadi effectively drifted into the shadows of the so-called caliphate, where he continued to orchestrate the development and expansion of the militant group as a terror phenomenon that spanned the globe.

But now that IS has lost most of the territory it gained in 2014, the death of al-Baghdadi could strike the final blow for the terror organization’s global ambitions.