The Muslim Brotherhood has been slow to adapt to its new reality. 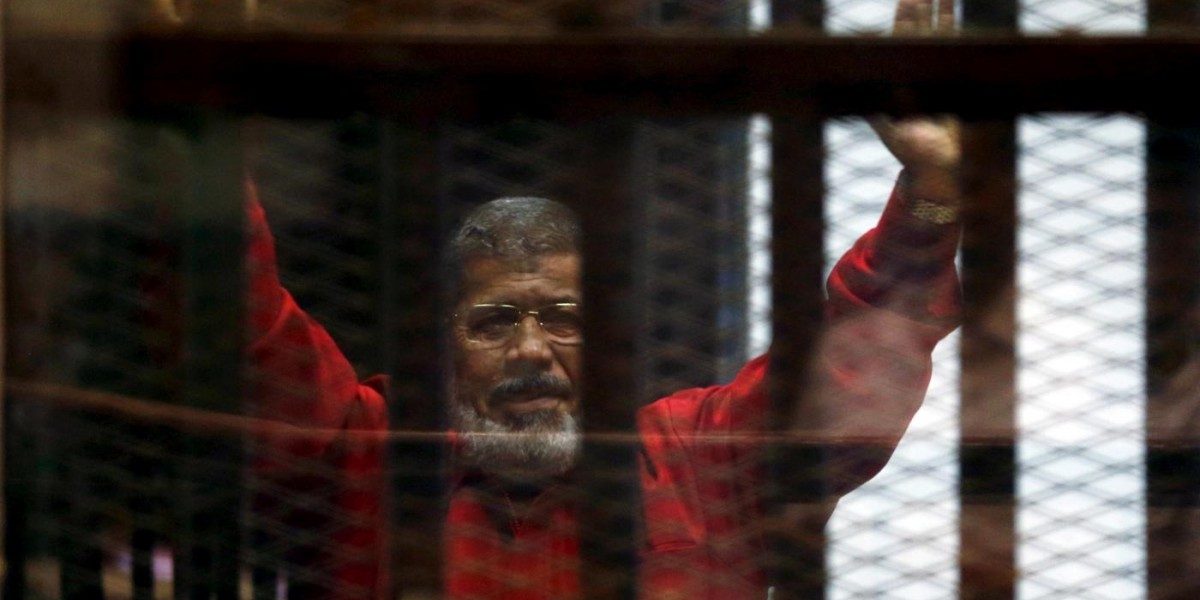 Morsi appears in court after being ousted as president. Photo: Reuters

The death of Egypt’s former president, Mohamed Morsi, in a Cairo court on June 17, on the same day he was elected six years previously, closed a chapter in Egyptian history. Morsi was the first president of Egypt to be elected in popular, representative and multiparty elections. But his burial in a graveyard alongside previous leaders of the Muslim Brotherhood group is a symbolic indication that a different approach within the 90-year-old organisation has not yet happened. His family wasn’t allowed to bury his body as he wished in his birthplace in the Delta village of Edwa.

Morsi led the Freedom and Justice Party, the Muslim Brotherhood’s first official political arm, and stood at the climax of its social, political and ideological struggle. His time as president only lasted one year and ended with the group plunged into its worse ever internal and external crisis. Six years on, the group still seems unable to find its way forward in a rapidly changing national, regional and international landscape.

The Muslim Brotherhood was founded as a social movement by Hassan Al Banna in the eastern Egyptian city of Ismailia in 1928, as a reaction to the fall of the Ottoman empire. The Brotherhood’s understanding is that Islam should encompass all aspects of life: political, social and personal. The early Brotherhood thought they could spread this concept by engaging in elections and by integrating into established social and political structures.

The group flourished under the Egyptian monarchy and managed to spread rapidly in Egypt and across the world until it faced its first crackdown under President Gamal Abdel Nasser in 1954. It started to rebuild its structure again from the 1970s onward under presidents Anwar Sadat and Hosni Mubarak.

After the revolution that overthrew Mubarak in 2011, the Brotherhood was initially undecided about whether the time was right for the group to put up a candidate for the presidential elections that followed. Its guidance office voted twice to reject running for the presidency but the group’s strong man, Khairat El Shater, managed to overturn this decision and won the group’s approval to run for president. However, he was among a group of candidates discredited by the electoral commission and Morsi replaced him.

Members who defected from the Brotherhood in 2013, who I’ve interviewed for my PhD research into the group’s political communications, maintain it should not have participated in the presidential elections. That remains the perspective of many of its current members.

During Morsi’s presidency there was no difference between the Brotherhood’s structure and that of its party political arm. All media, social and even religious activities of the members were combined.

During the Mubarak era, the Brotherhood had been a key player in the lives of Egyptians. It built hospitals and schools, established charities, helped the poor and dominated unions of both workers and students. None of this appeared to be helpful for running the country when the Freedom and Justice Party had full power. It was accused by critics of “Ikhawanisation” of the country – that they wanted Brotherhood members to occupy all the sensitive posts in the country. The liberals, leftists, Christians and other forces within Egyptian society were concerned about what effect the dominance of religion would have under the Brotherhood’s rule.

After the army ousted Morsi from power in July 2013, the group split into many factions. In the clampdown by the military that followed, it was designated as a terrorist organisation in Egypt later that year and the Freedom and Justice Party was banned, accused of being linked to violence in the Sinai peninsula, which it denied.

Since then, its leaders – who are now mainly outside Egypt – have struggled to convince many of remaining young members to accept that the peaceful approach established by Al Banna 90 years ago remains the right one to reach the group’s goals. Al Banna planned for the group to build and develop the individual Muslim, then the Muslim family, then Muslim society, then the Muslim state, then unity between Muslim countries, finally reaching “mastery of the world”.

After 2013, the Broterhood’s youth members kept asking the group’s leaders that if they had been removed from power so easily once they had been given the opportunity to rule Egypt, what was the point of keeping to that path. Many young members believed that they would have to find other ways to make the “Islamic project” succeed.

Mass trials of members of the Brotherhood found them guilty of a string of violent offences in late 2018, handing down death sentences to many. Many youth left the group after 2013, protesting about the dominance of the same leaders who they held responsible for the group’s crisis.

In my research, I’m finding that the Brotherhood is only prepared to tactically modify a few of its political strategies, no matter how big the change around them is. While its leaders in exile are using slightly more national language to address the whole Egyptian nation, it continues to use the same main themes of communication it was using before Morsi came to power.

Before they were banned in Egypt in 2013, the group’s affiliated media houses, the Freedom and Justice newspaper and Misr 25 TV channel, used to attack their opponents with accusations of violence, claiming that they didn’t represent Islam, were financed by foreign sources and didn’t act in Egypt’s national interests. They asserted that they alone represented Islam as a political force in Egypt, that they had refined understanding of its teachings and that following them was a duty for every Muslim. The Brotherhood’s media in exile are still using the same ideological framework.

Morsi’s death provoked an outpouring of mourning in Egypt and in countries where the Brotherhood still has a presence, such as Turkey, Qatar and the UK. While much of Egypt looks ready to move on – particularly with many Egyptians focused on the African Cup of Nations which Egypt is hosting – it appears many of the Brotherhood’s supporters had still hoped that Morsi might have one day returned as president. But unless the group makes big changes to its political strategies and internal policies, it’s unlikely they will be playing a role in Egyptian politics any time soon.