The migrants said tips delivered to their phones helped them evade checks by Mexican authorities. 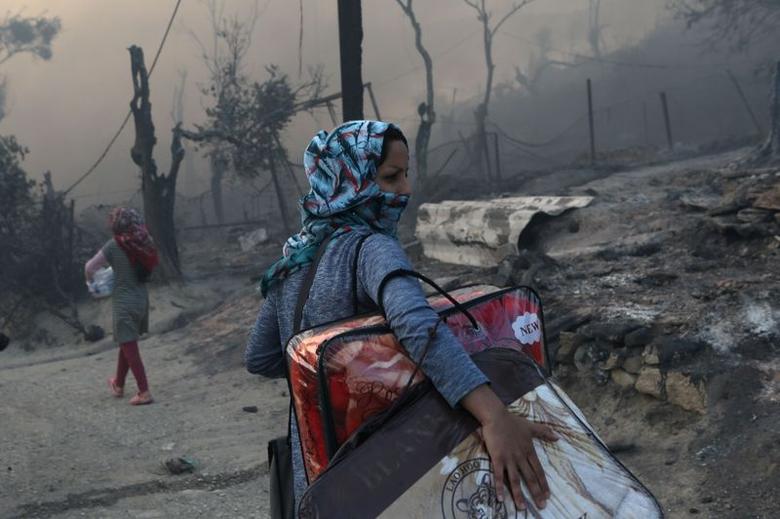 A migrant carries her belongings following a fire at the Moria camp for refugees and migrants on the island of Lesbos, Greece, September 9, 2020. Photo: Reuters/Elias Marcou

Over 10,000 migrants, most of them Haitians, were as of Friday sleeping on the ground in a squalid camp under the Del Rio International Bridge connecting Ciudad Acuña, Mexico to Del Rio, Texas, hoping to apply for US asylum.

The camp‘s quick growth — at least 2,000 people arrived on Thursday alone — has sparked questions about why groups were converging on Del Rio specifically.

In interviews, Haitians spoke of starting their journeys where they had been living under difficult conditions for some time in South America. They showed Reuters several guides they had been following on their phones — some just lists of Mexican towns and others detailed instructions on what buses to take – that all culminated by the Rio Grande in Del Rio, Texas.

James Pierre, 28, shared a WhatsApp list of 15 stops through Mexico — starting in Huixtla, Chiapas, and ending in Ciudad Acuña — that he said was circulating among Haitian migrants.

“Those ahead sent directions by phone. I helped people coming behind me,” Pierre said. Still, he said he got lost for days in the mountains and survived on little but water and fruit.

One image shared by a migrant who arrived on Friday included detailed instructions on bus routes through Mexico, including which terminals to get off and where to buy tickets. Several other Haitians also reported receiving the same instructions.

The instructions said: “These are the routes for which you will not be asked for any paperwork when buying travel tickets.”

Also read: ‘Narcotic Jihad’ and the Delusions of the Catholic Church

Groups of Haitians and other migrants who were frustrated with a long wait for travel documents tried to leave southern Mexico in caravans weeks ago.

Those groups were broken up by security forces that in some cases deployed excessive violence. One video widely circulated on social media showed Mexican immigration agents knocking to the ground and repeatedly stamping on a migrant. The two agents have since been suspended.

US border officials have been struggling with a growing number of migrant crossings. They have reached 20-year-highs along the US-Mexico border, topping 195,000 encounters in August.

Many of the Haitians interviewed by Reuters said they used to live in South America, often Brazil or Chile, but decided to move on because they could not attain legal status there or struggled to secure decent jobs. Some Haitians also said they were encouraged by videos they saw on social media about obtaining asylum in the United States.

Their Caribbean homeland has been plagued by economic and political instability and repeated natural disasters. Most recently, Haiti’s president was assassinated in July and in August the country was battered by both a 7.2 magnitude earthquake and a powerful storm.

Haitian Alexandro Petitfrere, 30, said that when he left a difficult life as a construction worker in Brazil last July, he hoped Mexico might prove a better home.

But Petitfrere said police officers robbed $100 from him as he was crossing into Tapachula, in the south of the country, in August. Reuters was not able to confirm his allegation.

He said he then had to sleep in queues to get a permit to stay in the area, could not find work, struggled to afford accommodation and said there was rampant discrimination against Haitians.

“If Mexico had given me an opportunity, I would have stayed. But because they mistreated us, I decided to come here” he added.