The giant of the region, Brazil, however, remains alone and isolated under Jair Bolsonaro's mismanagement. 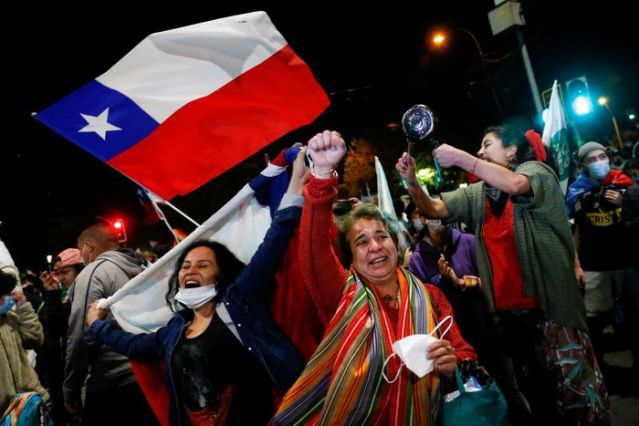 Supporters of the "I Approve" option react after hearing the results of the referendum on a new Chilean constitution in Valparaiso, Chile, October 25, 2020. Photo: Reuters/Rodrigo Garrido

Sao Paolo: Augusto Pinochet died in 2006, but the ghost of the dictator has continued to haunt Chile, which he turned into a laboratory of a neoliberal economic model forced on its people by a repressive junta. In his 17-years rule (1973–1990), Pinochet turned Chile into a wasteland of democracy. Now, 30 years since the end of his brutal rule, Chileans have given a clear message that they want to break free from Pinochet’s blood-drenched legacy, which is symbolised by the so-called “Pinochet constitution”, thrust on the country in 1980 to legalise the autocratic government.

On Sunday, October 25, an absolute majority (78%) of Chileans voted — in a referendum – in favour of a new constitution be rewritten by a constituent assembly elected by the people. In a country with a history of oppression of women, especially during the dictatorship years, half of this assembly will be made up of women. When the Pinochet constitution was drafted, there were only two women among the 12 authors of the document. As Chile made a historic decision that will reverberate beyond its borders, massive crowds took to the streets across the country to celebrate the result, fuelled by the hope of building a more inclusive and fairer Chile.

The process, however, will still require patience since it will take at least two years until the promulgation of the new charter. But Chile has taken a giant leap forward in turning its back on Pinochet’s violent years, which began on September 11, 1973, with the bombing of the Palacio de La Moneda in Santiago, from where the socialist president Salvador Allende, democratically elected by the people but hated by the United States, ruled the country.

The Pinochet Constitution, a study in how to distort political representation and destroy the welfare state, was never fundamentally changed by the civilian governments that came after the end of the dictatorship. Early in the Pinochet regime, a group of Chilean economists, known as the Chicago Boys, studied Milton Friedman’s ultraliberal primer in the US. They returned to Chile to apply Friedman’s ideas in their country, resulting in the privatisation of education, health, pension system and housing. While big corporations and the richest sections benefitted from lower taxes, the poorest of the population and the elderly bore the brunt of it in the absence of social safety nets. A graffiti in Chile advocating the idea of a new constitution. Photo: Reuters

But as democracy in Chile was trampled upon and the poor crushed, the country was paraded as a success of neoliberal policies in the West, even becoming the first South American nation to join the Organisation for Economic Co-operation and Development (OECD). The so-called Chilean growth story (an average of 7% in the 1990s) managed to mask the serious social problems for a long time, but the alarm bells started to beep in recent years. While poverty levels have fallen in recent decades, Chile is still one of the most unequal countries among the most developed nations, according to OECD data.

A wave of protests

In 2006, Chile witnessed what is called the “Penguin Revolution”. It was the beginning of a wave that would grow enormously in the following years. That year, high school students jammed the streets between April and October, demanding a better quality of education. Called “Penguin Revolution” because of the school uniform of students, it was the largest student protest in the history of Chile. Five years later, university students came out asking for changes in the educational system. The wave of protests over the years turned into a tsunami in October 2019, as angered by the increase in the price of public transport, the young stormed the streets demanding “complete change in the system”. As hundreds of thousands walked the streets seeking greater access to the healthcare system, improvements in education and free access to higher education, retirement benefits, end to gender violence, the defence of the environment and the rights of indigenous populations, it was clear that Chile’s much-touted neoliberal experiment had gone bust.

But the Chilean government responded to the protest by giving the police a free hand to control the streets with violence. As the number of people swelled, the police resorted to using rubber bullets, aiming right at the eyes of young protesters. Many had their eyesight impaired or went blind as the police fired the pellets into their faces.

Even as police tried to suppress the protests with brute force, which resulted in more than 36 deaths, more than 2,000 injured and thousands of arrests, with serious reports of human rights violations at every street corner, the tide of protests continued to rise. In the middle of protests and police violence, a video went viral in November 2019. In the video, Chilean women from the group Las Tesis were seen performing choreographed movements to the sounds of a song called “A violist en tu camino” (“A rapist in your path”). The lyrics of the song criticised the system and politicised the problem of violence against women: “The rapists are you. The policemen. The judges. The state.” As the video was widely shared on social media platforms and apps, it was repeated by women groups throughout Chile and in 300 cities around the world. The Chilean government began to feel the heat rising from the anger on its streets.

With police brutalities too failing to deter the protesters and his government under siege, president Sebastian Pinera hit a conciliatory tone, criticised the “abuses” by the police and agreed to hold a referendum in 2020 to ask the Chileans “whether they want a new constitution and if so, how it should be drafted”.

Just a few days before the referendum, on October 19, 2020, Chileans rocked the streets once again to mark one year of protests that have shaken the country’s ruling elite. There was violence again, with two churches being burned to the ground, but the referendum went as promised.

The referendum asked the Chileans two questions. The first was whether Chile should organise a constituent assembly to write a new constitution. If the answer was “yes”, how should this process move: through an assembly composed of parliamentarians and citizens in equal numbers or an assembly made up entirely of elected citizens. On Sunday, 78% of Chileans voted for the second proposal. The new constitutions will be written by citizens, with half of those constituents being women.

The return of pink tide?

The years-long battles on the streets of Chile, which have resulted in a huge victory for the people, show how the deep wounds caused by the military regimes, which ruled the continent for decades, are still open and festering. But it is also a signal that if people unite and protest like the Chileans, the far-right will not have an easy passage in South America.

The Chilean protests, police repression and an overwhelming vote in support of a new constitution to be written by elected citizens might fundamentally change the politics in Chile. The country votes for a new president in 2021. As per the latest opinion poll, Daniel Jadue, a prominent mayor from the Communist Party of Chile, is the front-runner at the moment.

Chile has a two-round polling system and the election is still months away, but the recent historic events in the country have energised the South American Left, which dominated the politics —  from Brazil to Argentina to Chile to Equador —  in the first decade or so of this century. Referred by some as the “pink tide”, the Left has been under siege with the surge of right-wing politicians across the continent.

The South American Left was badly shaken last year when then Bolivian president Evo Morales was forced to flee the country even after winning the election fairly as a clutch of right-wing politicians, led by Jeanine Anez, grabbed power in a coup openly backed by US President Donald Trump who praised the development in Bolivia as “strong signal” to Venezuela and Nicaragua.  In a letter sent to Anez on November 13, 2019, US Secretary of State Mike Pompeo “applauded” her “for stepping up as Interim President of State to lead her nation through this democratic transition”. Though Morales left for Mexico —  and then Argentina —  his party, Movement Toward Socialism (MAS), and supporters comprising mostly of indigenous tribes built a strong, year-long movement despite massive repression by the country’s armed forces. Running on the force of street protests and huge uprising in the countryside, the candidate of Morales’ party, crushed his right-wing opponent in the presidential election held on October 18 in a landslide victory in the first round itself.

Now, as it has been proven beyond doubt that Morales’s election was completely legal and Luis Arce of MAS gets ready to take over the country, Anez has been busy appealing for a “government of reconciliation” amid reports that she and members of her government were planning to run away to the US. “Bolivia’s coup regime, who massacred and persecuted every high-profile leftist, are begging the MAS to be a government of “reconciliation”. There’ll be justice, not revenge. The Left doesn’t come from the same violent culture as the pro-US forces,” Ollie Vargas, a prominent Bolivian journalist, tweeted on Monday.

The Latin American Left is still not as strong as it was a few years ago. But, even before the tumultuous events in Bolivia and Chile, there have been some signs of its revival. In 2018, Andrés López Obrador won the presidential election in Mexico by a landslide margin of 31 points, ending years of right-wing rule. In 2019, the ultra-liberal president Mauricio Macri lost the election in Argentina as the country’s Peronist center-left returned to power under Alberto Fernández. 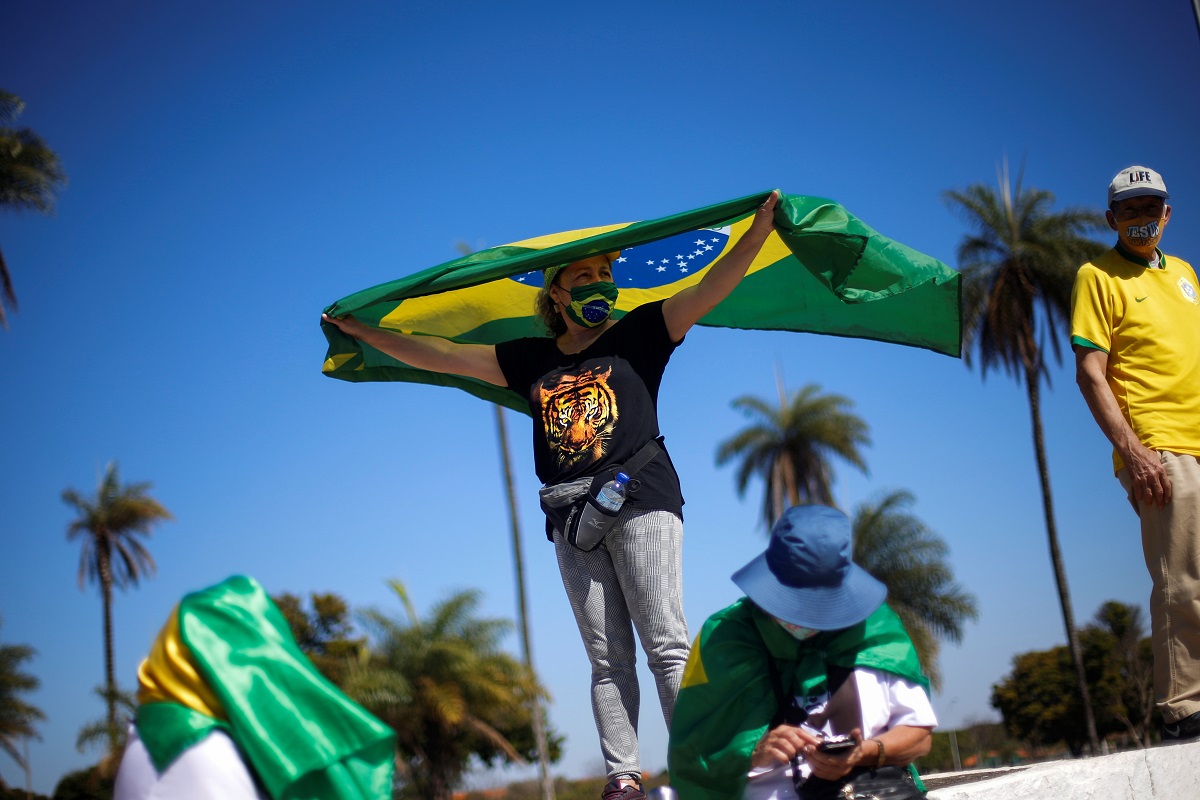 On Sunday, as the news of Chileans trashing the remnants of the authoritarian rule and economic model perfected under Pinochet reverberated throughout South America, there were quite a few long faces in Brasilia. For the Brazilian far-right government, it was the second bad news in as many weeks after the victory of Evo Morales’ party in Bolivia.

It is no secret that Brazilian president Jair Bolsonaro, a former army captain, is an open defender of military dictatorships, like Pinochet’s. Since taking over presidency in 2019, the Bolsonaro government has showcased Chile as the “great model” to be followed. Brazil’s Minister of Economy, Paulo Guedes, who worked with the Chicago Boys in Chile during the Pinochet dictatorship, is a strong advocate of ending social welfare. In an interview with the Financial Times in February 2019, Guedes proclaimed that “Chile today is like Switzerland”.

Also read: Bolsonaro’s Handling of COVID-19 Has Unleashed a Layered Crisis in Brazil

With its smaller neighbours taking —  or at least trying to chart —  a more progressive path for their people, the South American giant today stands alone. Brazil’s foreign minister Ernesto Araújo recently told a group of budding diplomats that it didn’t matter that his country looked like “an outcast” in the world, “if it is to defend freedom”.

With its disastrous response to the COVID-19 pandemic, which has infected more than 5.5 million people, killed 170,000 and destroyed millions of jobs and businesses, Brazil is already a pariah in the region. By following Pinochet-era economic policies amid a global pandemic, it risks further isolating itself from its neighbours.