US Department of Justice documents reveal that Rizve Ahmed was also seeking Robert Lustyik's help in getting "charges dropped" against an opposition politician, thought to be BNP leader Tarique Rahman. 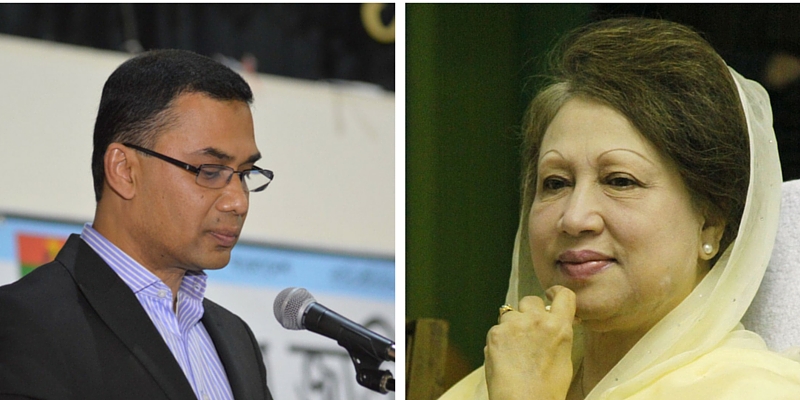 Dhaka: The Bangladeshi-American man convicted in the US of bribing an FBI agent to obtain confidential information on the Bangladeshi prime minister’s son also sought assistance from the agent to interfere with a US criminal investigation concerning a ‘prominent’ opposition politician.

According to a US Department of Justice document seen by The Wire, Rizve Ahmed sought information on “another prominent Bangladeshi national living outside the United States who is accused of having played a role in a terroristic 2004 grenade attack”. Ahmed also requested the FBI agent’s help in getting “charges dropped” against this man, described in the document as Ahmed’s “political ally”.

Although the document does not name the Bangladeshi national, only referring to him as “Individual 2”, the person is almost certainly Tarique Rahman, the son of Khaleda Zia, who leads the Bangladesh Nationalist Party (BNP).

In July 2011, a court in Dhaka issued an arrest warrant against Rahman for allegedly masterminding the 2004 grenade attack on an Awami League rally in which more than 20 people were killed. Rahman denies the charges and the BNP has called them politically motivated. Rahman, the presumptive future leader of the BNP and currently its senior vice-president, has lived in England since 2008 following a deal in which the then military controlled interim government released him from jail so that he could obtain medical treatment.

Another document filed with the US court containing mobile phone text conversations that refer to the opposition politician as living in ‘London’ and subject to a ‘credit card’ investigation also point to Rahman being the person referred to by the Department of Justice.

Till now, attention on the US criminal case had focused on the role of the US-Bangladesh citizen Ahmed paying FBI agent Robert Lustyik to obtain personal and financial information on Sajeeb Wazed, the son of Prime Minister Sheikh Hasina.

In early 2015, Ahmed, a supporter of the BNP, along with the FBI agent and their mutual friend Johannes Thaler, pleaded guilty to bribery offences and have received sentences of varying lengths of imprisonment.

The Bangladeshi authorities have claimed that evidence collected by the US police, as part of this bribery investigation, showed that Ahmed sought to use the information to kidnap and kill Wazed. They have also arrested two senior pro-opposition journalists whom they claim were part of a transnational plot.

These allegations have been disputed by lawyers acting for the journalists, who point out that the US judge ruled during a sentencing hearing that there was no credible evidence to support the contention that Ahmed sought to harm Wazed.

New documents seen by The Wire, however, show that Ahmed was not only interested in obtaining information on Wazed, but also his arch-rival in the BNP, Rahman.

A Department of Justice submission to the US court prior to the sentencing of the FBI agent states that on December 16, 2011 Thaler had texted Lustyik that in exchange for a $40,000 retainer and $30,000 monthly “they want everything on [Wazed] plus getting [Individual 2’s] charges dropped”.

The submission goes onto say that on January 29, 2012 Lustyik and Thaler met in Danbury with Ahmed and his associates, which included “an individual who had traveled from Bangladesh for purposes of the meeting”.

“Lustyik offered to personally provide assistance, including by traveling internationally, to Individual 2, for the benefit of Ahmed’s associates,’ the Department of Justice submission states, referring to this individual at one point in the document as “a suspected terrorist”.

A submission filed by Lustyik’s lawyer as part of his attempt to reduce his client’s sentence provides further corroborative information that individual 2 refers to the Rahman as well as more detail on the nature of the US criminal investigation that Ahmed wanted ‘dropped’.

On December 17, Thaler texted his FBI agent friend that Ahmed’s main concern is “investigation of son. What they have, [how] far along they are etc…”

Later that day Lustyik confirmed to Thaler that “[T]here is a pending investigation and they want to arrest him? Cause yes. They do. The case is also with the Secret Service who handles US credit card fraud.”

Thaler responded by saying, “They want to know what the evidence and what witnesses. Can they arrest him in London?”

The defence lawyer’s submission then set out a further text exchange that same day in which Ahmed asked Thaler about the likelihood of an imminent arrest involving allegations of credit card fraud.

Ahmed: OK how sure n if I tell that n turnout to be false I will be fuck

Thaler: I am sure

Thaler: Next few days. End of week at most

Ahmed: Who asked for the warrant n based on what.

Thaler: Don’t know for sure. But US secret service is investigating him for credit card fraud. Or it could be your government. I don’t have all the details

The Department of Justice declined further information to The Wire about this investigation, but references to ‘credit card fraud’ may well be connected to the FBI’s investigation in 2009 into $750,000 (5.8 crore taka) that that was placed by a Bangladeshi businesswomen into a Singapore bank account opened by Rehman’s business partner Giasuddin Al Mamun.

In 2008, during the state of emergency government, the FBI had agreed to provide assistance to Bangladesh’s Anti-Corruption Commission in the investigation of ‘asset recovery cases’ and in November 2011, FBI supervisory special agent Debra Laprevotte attested at a money laundering trial in Bangladesh that Rahman had used a credit card linked to this account where he had spend just over $50,000.

Rahman was acquitted of that charge, although the government is appealing.

The BNP leader was never arrested in London and there is doubt whether the US authorities were actually considering charging Rahman with any offence.

A spokesperson of the US Department of Justice told The Wire that they could not confirm that the “Individual 2 was Tarique Rahman”.

“We are unable to confirm the identity of individuals that are not named in public documents,” the spokesperson said. He also said that he was unable to provide further information on any investigations into that person.

David Bergman is an investigative  journalist based in Bangladesh. He also runs the Bangladesh Politico and Bangladesh War Crimes blogs.