The West Is Still Complicit in the War on Yemen

The US – as well as European powers like France and Germany – continue to sell arms and pour fuel on the humanitarian disaster in Yemen. 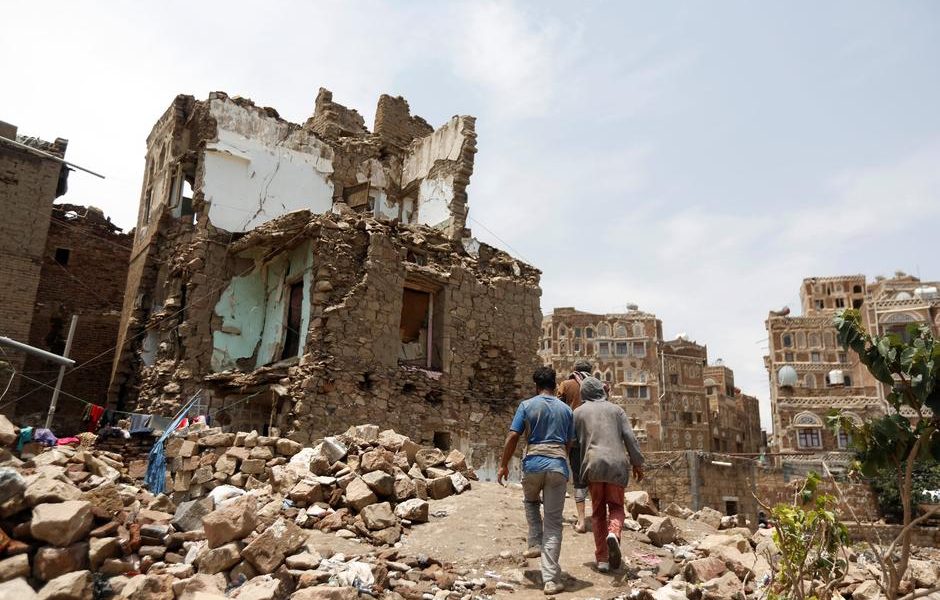 People walk past a house destroyed by an air strike in the old quarter of Sanaa, Yemen August 8, 2018. Photo: Reuters/Khaled Abdullah

Late last year, in the waning days of his administration, Donald Trump made an unsurprising but nevertheless grotesque announcement: the United States had agreed to sell an incredible $23 billion worth of bombs, drones, and fighter jets to the United Arab Emirates, despite – or perhaps, because of – their repeated use of US weapons to commit unspeakable atrocities in Yemen.

Tragically, this was nothing new: one cannot speak of the humanitarian disaster in Yemen without mentioning the complicity of the West. Born out of a domestic contest for political control, the already brutal Yemeni civil war has transformed into an unrelenting and unmitigated killing field at the hands of foreign actors.

The United States has been an active and malign influence in Yemen since well before the onset of war in 2014. Starting under the Bush administration, and continuing without pause under Obama and Trump, the US drone campaign killed somewhere between 1,020 and 1,389 people from 2004 to February 2020 in Yemen alone.

Thus when, in 2015, a coalition led by Saudi Arabia and the United Arab Emirates began an intervention into the war, the US jumped at the chance to lend its support. From the West to the Gulf, backing from US allies was soon overwhelming, justifying their decision by claiming “[it] was Saudi’s legitimate and logical response to block Iranian expansion in the Gulf and to prevent a humanitarian disaster in the Kingdom’s backyard.”

It’s hard to believe that Saudi intervention was necessary to avoid disaster in Yemen. It’s even harder to believe that the Obama administration wasn’t fully aware of the disaster they would soon sponsor. As former Obama administration official Robert Malley later acknowledged, the United States at the time was worried that, after the Arab Spring, and with the Iran nuclear deal negotiations ongoing, the “decades old relationship” with Saudi Arabia was “at a breaking point.” According to Malley “nobody could question” that massive suffering “was a very, very likely outcome” — but keeping Saudi Arabia happy was more important.

These predictions of suffering would quickly come true. Both the US and the UK soon began providing logistical, intelligence, and diplomatic support, while they, Germany, France, and more have all provided massive flows of weapons to the intervention coalition. Backed by such overwhelming and unconditional support, the coalition has had no qualms about repeatedly committing horrific crimes against the civilian population, including using mass starvation as a weapon of war by imposing a land, sea and air blockade on a country that already imported more than 90% of its food before the war. Simply put, without the help of the US and the UK, many of these atrocities would never have been committed. Meanwhile, other Western countries have provided decisive diplomatic support, partly by not jeopardising business with the absolutist monarchies of the Gulf, and partly by avoiding interfering with, or often actively promoting, the big business of weapons sales.

For the Yemeni population, this blank check for the Coalition intervention has spelled disaster. After years of conflict, 24 million people now require some form of humanitarian assistance. According to the famous report of the Pardee Center for the United Nations Development Programme, since March 2015, approximately 310,000 people have died in the conflict.

Last year, this already-dire humanitarian crisis deteriorated even further. The intensification of fighting, environmental catastrophe — floods have now displaced more than 300,000 — and the impact of the Coronavirus in a country with little remaining healthcare system have all played a deadly part. Against this background, United Nations aid programs have become the only instrument that millions of people depend upon to survive.

But existing aid is not enough. With a scaling back of funding from Saudi Arabia and the UAE, the UN is now desperately urging the international community to help avert “the worst famine the world has seen for decades.”

The West, however, has not met the United Nations’ call. The numbers speak for themselves: less than half of the humanitarian aid requested by the United Nations has been delivered to Yemen. For a sense of scale, compare the remainder — $1.7 billion — to the tens of billions of dollars that the West sells in arms to the coalition each year.

In short, the West has not only poured gas on the Yemeni conflagration — it has also cut off the fire hose’s water supply.

But all hope for Yemen is not lost. While Western governments have supported the systematic murder of a generation, movements across the world have mobilized in resistance. The Campaign Against Arms Trade (CAAT) managed to temporarily paralyze the United Kingdom’s sale of weapons to Saudi Arabia, despite the British government’s best effort. Italian dockworkers have taken direct action, refusing to load a ship with weapons bound for Saudi Arabia. And, bowing to pressure following the murder of journalist Jamal Khashoggi, the conservative German government of Angela Merkel declared an embargo on Saudi Arabia. (Merkel’s government still has no qualms about selling weapons to the UAE, however).

One important piece of this battle is taking place in the United States, where sustained grassroots pressure has managed to push back on the entrenched powers of the weapons industry, the warmongering foreign policy establishment, and the Saudi/Emirati lobbies to force the Democratic Party toward a more progressive position than that under Obama. Over the course of the Trump administration, the U.S. Congress voted multiple times to block specific weapons sales to the UAE and Saudi Arabia. Though these were ultimately vetoed, the incoming Biden administration provides a chance for change, with “ending U.S. complicity in the war in Yemen” an explicit campaign promise. Surely the establishment, corporate-friendly politics of a Biden administration are not going to lead the way on their own, but the chances of a total rethinking of U.S. relations with Saudi Arabia are higher than they’ve been in years.

There are reasons to be optimistic, but also to be cautious. Western elites will not confront the interests of the powerful military-industrial complex on their own. Only mobilisation can force them to. The time for such mobilisation is now: the people of Yemen can wait no longer.

This article was originally published by Progressive International.