The mission of observers from the 47-member Council of Europe, the continent's leading human rights body, had said that the referendum was an uneven contest. 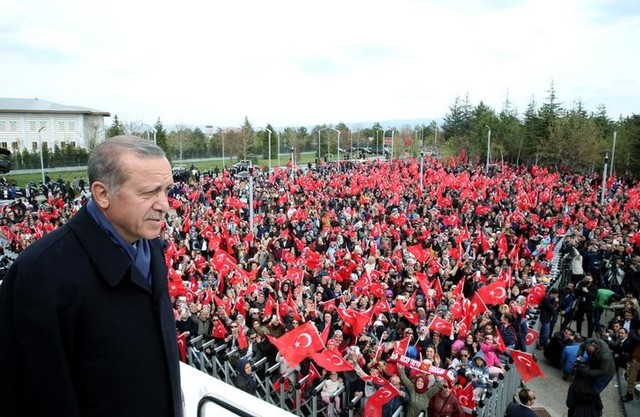 Erdogan, whose narrow victory laid bare the nation’s divisions, told flag-waving supporters that foreign election observers should “know their place” and Turkey did not “see, hear or acknowledge” criticism that the vote did not live up to international standards.

Sunday’s vote ended all debate on forging a stronger presidency, said Erdogan, who argues that concentration of power is needed to prevent instability.

Opponents accuse him of leading a drive towards one-man rule in Turkey, a NATO member that borders Iran, Iraq and Syria and whose stability is of vital importance to the US and the EU.

The main opposition party rejected the result and called for the vote to be annulled. Thousands of people marched through at least three neighbourhoods of Istanbul, some chanting “Thief, Erdogan,” “no to the presidency” and “this is just the beginning” after calls on social media for protests in several cities.

Late on Monday, the cabinet extended a state of emergency by three months, deputy prime minister Numan Kurtulmus told reporters. It was the third such extension since a failed coup attempt last July. 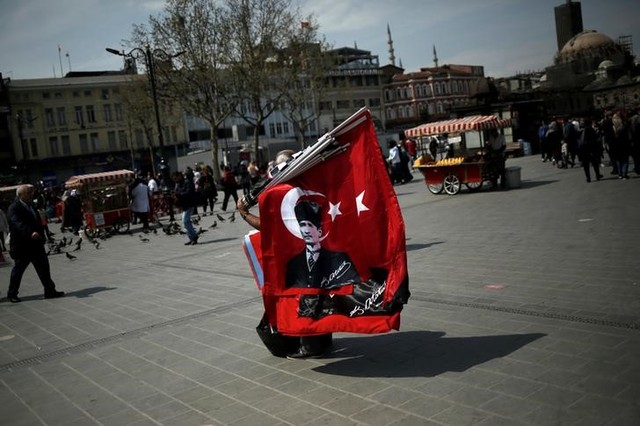 Election authorities said preliminary results showed 51.4% of voters had backed the biggest overhaul of Turkish politics since the founding of the modern republic.

US President Donald Trump called Erdogan to congratulate him on his referendum victory and to thank him for supporting a US missile attack on Syria in response to a chemical attack by Syrian government forces on April 4, the White House said in a statement.

Trump and Erdogan also agreed on the importance of holding Syrian President Bashar al-Assad accountable for the chemical attack and discussed the campaign against the ISIS, the statement said.

But the narrowness of his victory could add to volatility in a country that has lately survived an attempted coup, attacks by Islamists, a Kurdish insurgency, civil unrest and war across its Syrian border.

The result laid bare the deep divide between the urban middle classes who see their future as part of a European mainstream and the pious rural poor who favour Erdogan‘s strong hand. Erdogan reiterated his readiness to restore the death penalty at several appearances on Monday, which would effectively end Turkey’s decades-long quest to join the EU.

He said it was not important if the EU suspended Turkish accession talks.

“The crusader mentality in the West and its servants at home have attacked us,” Erdogan told a crowd as he arrived at Ankara airport, referring to the foreign monitors’ assessment. “We neither see, hear, nor acknowledge the political reports you’ll prepare,” he said later at the palace. “We’ll continue on our path. Talk to the hand. This country has carried out the most democratic elections, not seen anywhere in the West.”

The mission of observers from the 47-member Council of Europe, the continent’s leading human rights body, said the referendum was an uneven contest. Support for “Yes” dominated campaign coverage, and the arrests of journalists and closure of media outlets silenced other views, the monitors said.

“In general, the referendum did not live up to Council of Europe standards. The legal framework was inadequate for the holding of a genuinely democratic process,” said Cezar Florin Preda, head of the delegation.

While the monitors had no information of actual fraud, a last-minute decision by electoral authorities to allow un-stamped ballots to be counted undermined an important safeguard and contradicted electoral law, they said.

The US state department said it had taken note of the European monitors’ concerns and looked forward to a final report, urging the Turkish government to protect the rights and freedoms of all citizens, however they voted. 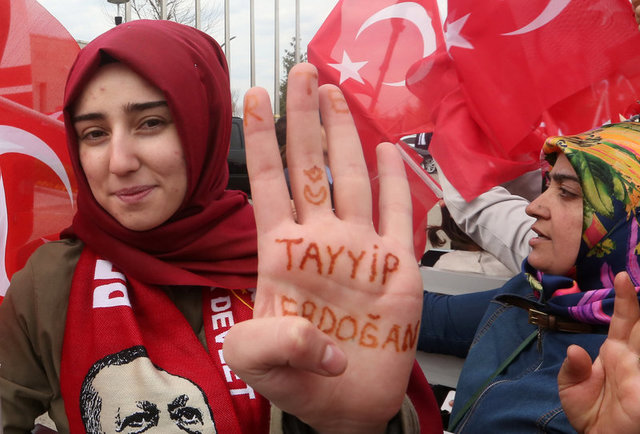 A woman shows her hand, which reads “Tayyip Erdogan”, as she waits for the arrival of Turkish President Tayyip Erdogan at Esenboga Airport in Ankara, Turkey, April 17, 2017. Credit: Reuters/Stringer

Erdogan, a populist with a background in once-banned Islamist parties, has ruled since 2003 with no real rival, while his country emerged as one of the fastest-growing industrial powers in both Europe and the Middle East.

He has also been at the centre of global affairs, commanding NATO’s second-biggest military on the border of Middle East war zones, taking in millions of Syrian refugees and controlling their further flow into Europe.

He vowed Turkey’s recent incursion into northern Syria would not be its last such venture in the region, saying it would carry out as many military operations as necessary, wherever necessary, in its fight against terrorism.

The two largest opposition parties both challenged the referendum, saying it was deeply flawed.

The main secularist opposition People’s Republican Party said it was still unclear how many votes were affected.

“This is why the only decision that will end debate about the legitimacy (of the vote) and ease the people’s legal concerns is the annulment of this election,” deputy party chairman Bulent Tezcan said.

The president survived a coup attempt last year and responded with a crackdown, jailing 47,000 people and sacking or suspending more than 120,000 from government jobs such as teachers, soldiers, police, judges or other professionals.

The changes could keep him in power until 2029 or beyond, making him easily the most important figure in Turkish history since state founder Mustafa Kemal Ataturk built a modern nation from the ashes of the Ottoman empire after the First World War.

The result triggered a 2% rally in the Turkish lira from its close last week.

Germany, home to several million Turks, said it was up to Erdogan himself to heal the rifts that the vote had exposed.

“The tight referendum result shows how deeply divided Turkish society is, and that means a big responsibility for the Turkish leadership and for President Erdogan personally,” said Chancellor Angela Merkel and foreign minister Sigmar Gabriel in a joint statement.

Relations with Europe were strained during the referendum campaign when Germany and the Netherlands barred Turkish ministers from holding rallies. Erdogan provoked a stern German response by comparing those limits to the actions of the Nazis.

Under the changes, most of which will only come into effect after the next elections, due in 2019, the president will appoint the cabinet and an undefined number of vice-presidents, and will be able to select and remove senior civil servants without parliamentary approval.