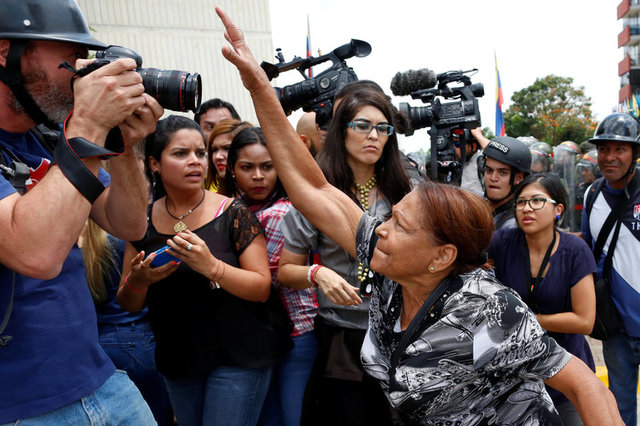 A supporter of Venezuela's President Nicolas Maduro tries to take the camera of a photographer away, during clashes with opposition supporters outside the Supreme Court of Justice (TSJ) in Caracas, Venezuela March 30, 2017. Credit: Reuters

Caracas: Opposition leaders branded Venezuela’s socialist President Nicolas Maduro a “dictator” on Thursday after the Supreme Court took over the functions of congress and pushed a lengthy political standoff to new heights.

There was swift and widespread international condemnation of the de facto annulment of the national assembly, where the opposition won a majority in late 2015 amid an unprecedented economic crisis that has seen Maduro’s popularity plummet.

The head of the 34-nation Organisation of International States (OAS), Luis Almagro, said the Venezuelan court had dealt the final blows to democracy and accused Maduro’s “regime” of carrying out a “coup.”

Brazil, Argentina, Mexico, Colombia, Chile, Guatemala and Panama expressed strong concerns while Peru withdrew its envoy after what it termed a rupture of democracy.

The US described the move as a “serious setback for democracy in Venezuela” while the EU called for a “clear electoral calendar” going forward.

Venezuela’s top court had already overturned most national assembly decisions since the opposition win. Then late on Wednesday, it explicitly stated it was assuming congress’s role in a ruling authorising Maduro to create oil joint ventures without the previously mandated congressional approval.

“As long as the situation of contempt in the national assembly continues, this constitutional chamber guarantees congressional functions will be exercised by this chamber or another chosen organ,” the court said in its ruling.

The contempt charge stems from vote-buying accusations against three lawmakers from southern Amazonas state. Even though they no longer sit in congress, the court said parliamentary leaders had not handled their case legally.

Critics of Maduro say it is an excuse for him to consolidate power and muzzle the opposition amid a severe recession, soaring inflation and acute shortages of food and medicine.

Maduro, a 54-year-old former bus driver and foreign minister, was narrowly elected in 2013 to replace late leftist President Hugo Chavez. He has accused Washington of leading a push to topple him as part of a wider offensive against leftist governments.

Stung by the rebukes around Latin America, Maduro’s government condemned what it described as a “right-wing regional pact” against it on Thursday.

“We reject the Peruvian government’s rude support for the violent and extremist sectors in Venezuela,” foreign minister Delcy Rodriguez said in a series of tweets. 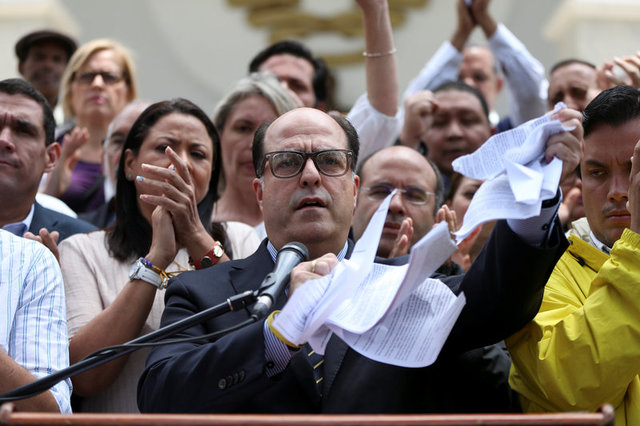 Julio Borges (C), President of the National Assembly and deputy of the Venezuelan coalition of opposition parties (MUD), tears a copy of a sentence of the Venezuela’s Supreme Court during a news conference in Caracas, Venezuela March 30, 2017. Credit: Reuters

“Nicolas Maduro has carried out a ‘coup d’etat’ … this is a dictatorship,” said National Assembly President Julio Borges, before tearing up a copy of the Supreme Court ruling at a news conference in the gardens of the legislature.

“This is trash from people who have kidnapped the constitution, rights and freedom of Venezuelans … The National Assembly does not recognise the Supreme Court.”

The opposition promised new street protests starting from Saturday – but that tactic has failed in the past despite marches that have drawn hundreds of thousands of protesters.

Last year, the opposition pushed for a referendum to recall Maduro and force a new presidential election, but authorities thwarted them and also postponed local electoral races that were supposed to have been held in 2016. 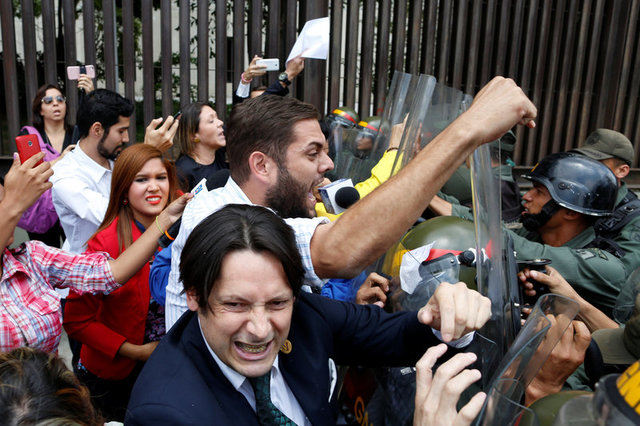 Deputies of the Venezuelan coalition of opposition parties (MUD), clash with Venezuela’s National Guards during a protest outside the Supreme Court of Justice (TSJ) in Caracas, Venezuela March 30, 2017. Credit: Reuters

Around a dozen opposition lawmakers trying to march to the Supreme Court on Thursday clashed with National Guard soldiers and pro-government supporters lined up to stop them.

Pockets of youths took to the streets in parts of Caracas and attempted to block a major highway. They held flags and banners saying, “No to dictatorship.”

However, numbers were small and they quickly dispersed.

In 2014, a wave of unrest swept the country, leaving more than 40 dead, though now many opposed to the government say they feel protesting is pointless.

“If the international community stays firm, demanding elections, we are sure the government will have to turn back,” another opposition leader and two-time presidential candidate Henrique Capriles said.

Spooked by the opposition’s warning that investment deals bypassing Congress would not be valid, foreign oil companies were closely following the political showdown. As Venezuela tries to raise funds for bond payments and a reeling economy, it has sought to sell stakes in oil fields.

“We want to make perfectly clear to all the oil companies that any strategic alliance (that did not go through Congress) is null,” Borges said on Thursday. While some investors could see the Supreme Court sentence as giving them the green light to invest, others are increasingly worried about Venezuela’s murky legal framework.

“There is reasonable doubt about the legality of all this,” said a source at a foreign oil company.