Ginsburg's death could dramatically alter the ideological balance of the court, which already had a 5-4 conservative majority, by moving it further to the right.

Washington: Justice Ruth Bader Ginsburg, a stalwart liberal on the US Supreme Court since 1993, died on Friday at age 87, giving President Donald Trump a chance to expand its conservative majority with a third appointment at a time of deep divisions in America with a presidential election looming.

Ginsburg, a champion of women’s rights who became an icon for American liberals, died at her home in Washington of complications from metastatic pancreatic cancer, the court said in a statement. She was surrounded by her family, it said.

Ginsburg’s death could dramatically alter the ideological balance of the court, which already had a 5-4 conservative majority, by moving it further to the right.

“Our Nation has lost a jurist of historic stature,” Chief Justice John Roberts said in a statement. “We at the Supreme Court have lost a cherished colleague. Today we mourn, but with confidence that future generations will remember Ruth Bader Ginsburg as we knew her – a tireless and resolute champion of justice.”

“President Trump’s nominee will receive a vote on the floor of the United States Senate,” McConnell said.

McConnell’s stance is a dramatic reversal from the position he took in a similar situation four years ago, when he refused to act on Democratic President Barack Obama’s election-year nomination of centrist appeals court judge Merrick Garland to replace conservative Justice Antonin Scalia, who died in February 2016. Some Democrats accused McConnell and his fellow Republicans of “stealing” a Supreme Court seat.

McConnell’s explanation in a statement on Friday was that in 2016 the Senate and White House were controlled by different parties while now they are both controlled by Republicans. Democrats have called McConnell’s about-face hypocrisy.

Trump is facing Democratic challenger Joe Biden in the election.

“Today, our nation mourns the loss of a titan of the law,” Trump said in a statement, adding that Ginsburg’s decisions “have inspired all Americans, and generations of great legal minds.”

Trump, who as a presidential candidate in 2016 called on Ginsburg to resign and said “her mind is shot” after she criticised him in media interviews, did not mention any potential plans about nominating a replacement.

Biden voiced opposition to Trump sending a nominee to the Senate before the election, saying the winner of the election should get to select Ginsburg’s replacement. 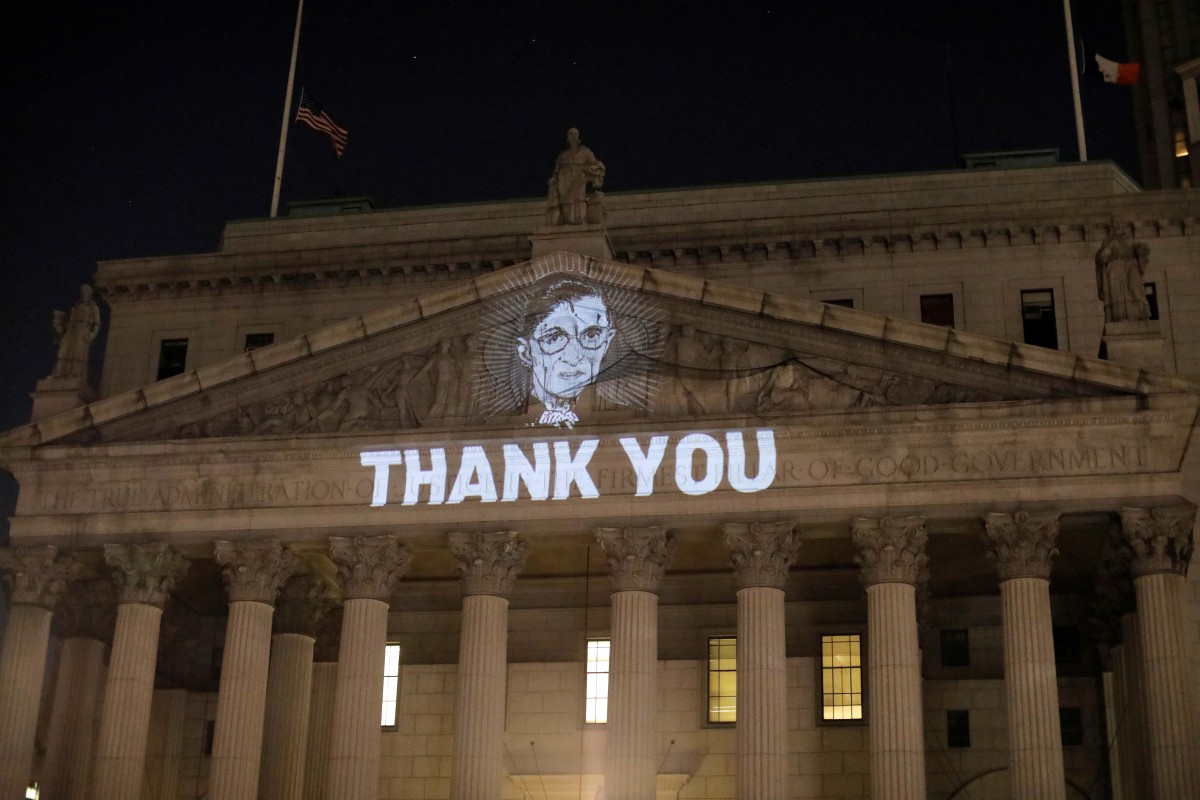 An image of Associate Justice of the Supreme Court of the United States Ruth Bader Ginsburg is projected onto the New York State Civil Supreme Court building in Manhattan, New York City, U.S. after she passed away September 18, 2020. Photo: Reuters/Andrew Kelly

US Senate Democratic leader Chuck Schumer wrote on Twitter: “The American people should have a voice in the selection of their next Supreme Court Justice. Therefore, this vacancy should not be filled until we have a new president.”

National Public Radio reported on Friday that Ginsburg before her death dictated a statement to her granddaughter Clara Spera, saying, “My most fervent wish is that I will not be replaced until a new president is installed.”

Soon after her death was announced, a large nighttime crowd gathered outside the white marble neoclassical Supreme Court building to pay tribute to Ginsburg, with some lighting candles, leaving flowers and waving rainbow flags for LGBT rights.

Supreme Court justices play an enormous role in shaping US policies on hot-button issues like abortion, LGBT rights, gun rights, religious liberty, the death penalty and presidential powers. For example, the court in 1973 legalized abortion nationwide – a decision that some conservatives are eager to overturn – and in 2015 allowed same-sex marriage across the United States.

Ginsburg, who rose from a working class upbringing in New York City’s borough of Brooklyn and prevailed over systemic sexism in the legal ranks to become one of America’s best-known jurists, was appointed to the Supreme Court by Democratic President Bill Clinton in 1993. She provided key votes in landmark rulings securing equal rights for women, expanding gay rights and safeguarding abortion rights.

Ginsburg was the oldest member of the court and the second-longest serving among its current justices, behind Clarence Thomas. She was the second woman ever named to the court, after Justice Sandra Day O’Connor was appointed 12 years earlier.

Also read: Christianity at the US Supreme Court: From Majority Power to Minority Rights

The expected Senate confirmation battle over a Trump nominee to replace Ginsburg is likely to be fierce – at a time of social unrest in the United States during the coronavirus pandemic – though Democrats lack the votes to block a Trump nominee unless some Republican senators join them.

Republicans also risk the possibility of Democrats embracing more radical proposals should they win November’s election, with some activists on the left suggesting even before Ginsburg’s death that they should increase the number of justices on the court in order to counter Trump’s appointees.

Trump on Sept. 9 unveiled a list of potential nominees to fill any future Supreme Court vacancies in a move aimed at bolstering support among conservative voters.

Many court-watchers expect Trump to attempt to replace Ginsburg with a woman. One possible contender on Trump’s list is Amy Coney Barrett, a conservative judge on the Chicago-based 7th US Circuit Court of Appeals who was under consideration in 2018 before Trump nominated Kavanaugh.

Trump will get a chance to reshape the court like no other president since Ronald Reagan, who made three appointments during his eight years in office in the 1980s, moving the court to the right.

Trump and McConnell have made moving the federal judiciary to the right a top priority. Another Trump appointment would give the Supreme Court a 6-3 conservative majority, meaning that for the liberal justices to prevail in any case they would need to have two of the conservatives join them.

Some liberal activists had urged Ginsburg to step down early in Obama’s second term to allow him to appoint a younger liberal to replace her who could serve decades on the court.

Recent Supreme Court confirmations have taken at least two months from the day the nomination was announced.

A private interment service for Ginsburg will be held at Arlington National Cemetery, the court said, but did not specify a date.