Washington: Two mass shootings that killed 29 people in Texas and Ohio reverberated across the US political arena on Sunday, with some Democratic presidential candidates accusing President Donald Trump of stoking racial divisions while he said “hate has no place in our country.”

Dozens were also wounded Saturday and early Sunday in shootings within just 13 hours of each other in carnage that shocked a country that has become grimly accustomed to mass shootings and heightened concerns about domestic terrorism.

The first massacre occurred on Saturday morning in the heavily Hispanic border city of El Paso, where a gunman killed 20 people at a Walmart store before surrendering. Authorities in Texas said the rampage appeared to be a racially motivated hate crime and federal prosecutors are treating it as a case of domestic terrorism.

Across the country, a gunman opened fire in a downtown district of Dayton, Ohio, early on Sunday, killing nine people, including his sister, and wounding at least 27 others. The assailant, identified as Connor Betts, a 24-year-old white man, was taken down by police within 30 seconds but authorities still did not know his motive for the attack, the city’s police chief said.

The El Paso shooting sent shock waves onto the campaign trail for next year’s presidential election, with most Democratic candidates repeating calls for tighter gun control measures and some drawing connections to a resurgence in white nationalism and xenophobic politics in the United States. 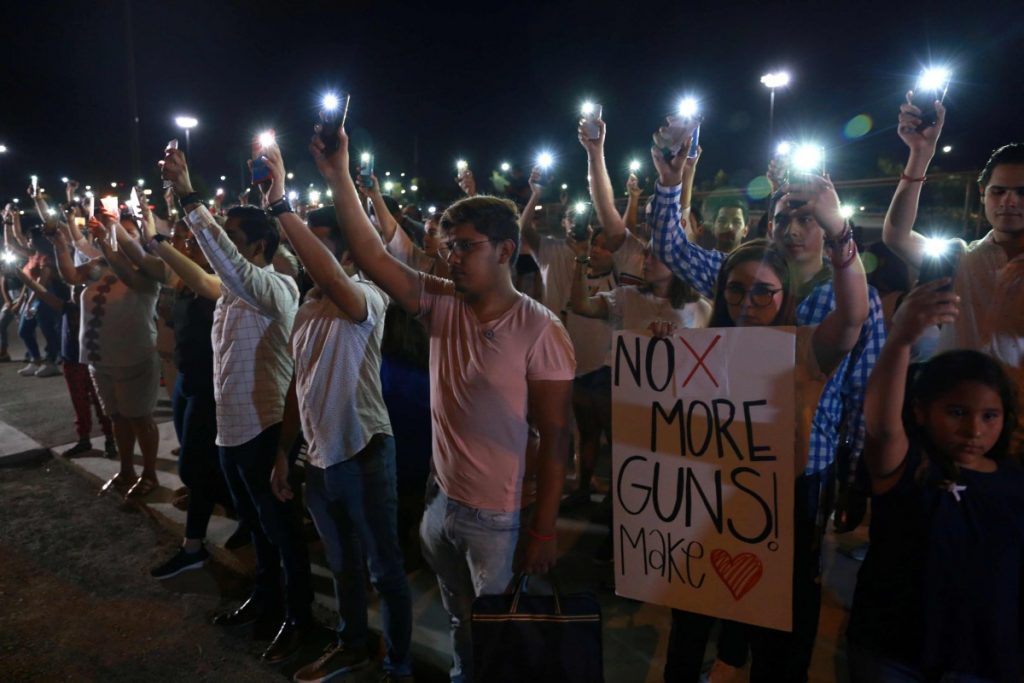 Mourners take part in a vigil near the border fence between Mexico and the US in Ciudad Juarez. Photo: Reuters/Carlos Sanchez

“Donald Trump is responsible for this. He is responsible because he is stoking fears and hatred and bigotry,” US Senator Cory Booker said on CNN’s “State of the Union.”

Speaking to reporters on the airport tarmac in Morristown, New Jersey after spending the weekend at his golf resort nearby, Trump said: “Hate has no place in our country, and we’re going to take care of it.” 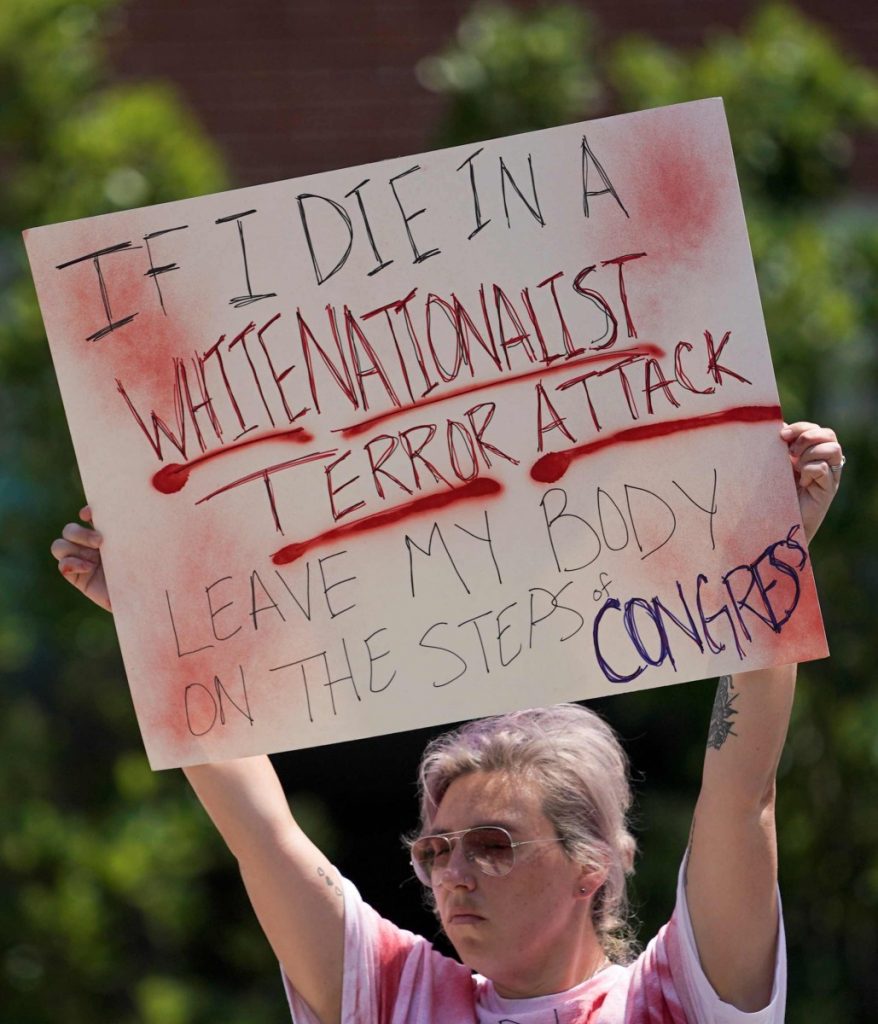 Amanda Luke, of Fairborn, Ohio, holds a sign during a vigil after the mass shooting in Dayton, Ohio. Photo: Reuters /Bryan Woolston

In his first public comments on the shootings, he said he had spoken to the FBI, Attorney General William Barr and members of Congress about what can be done to prevent such violence, adding that “we have to get it stopped.” But he offered no specifics, except to say he would make a statement on Monday morning.

The Republican president did not address accusations by critics about his anti-immigrant and racially charged rhetoric, though he earlier called the El Paso shooting an “an act of cowardice.”

“This is also a mental illness problem, if you look at both of these cases,” Trump told reporters.

Trump ordered flags at half-staff in honour of the victims.

“There’s no benefit here in trying to make this a political issue, this is a social issue and we need to address it as that,” he said on ABC‘s ‘This Week.’

Mexican foreign minister Marcelo Ebrard said Mexico would request, if necessary, extradition of the person responsible for the El Paso shooting. Mexico will consider litigation over an act of terrorism towards Mexicans in the United States.

Six Mexicans were among those killed by the gunman in El Paso. “For Mexico, this individual is a terrorist,” Ebrard said at a news conference.

It was a personal issue for Democratic presidential candidate Beto O’Rourke, the former congressman who returned to El Paso after the attack in his hometown. Asked on CNN if he believed Trump was a white nationalist, he responded, “Yes, I do.”

“He is an open avowed racist and is encouraging more racism in this country,” O’Rourke said. Democratic presidential candidate Beto O’Rourke at the site of a mass shooting where 20 people lost their lives at a Walmart in El Paso. Photo: Reuters/Jose Luis Gonzalez

“Clearly Donald Trump does not want anybody shooting down innocent people,” Sanders said, but his talk about invasions and calling Mexicans criminals risks leading unstable people to take up arms.

A hallmark of Trump’s presidency has been his determination to curb illegal immigration. Trump has drawn criticism for comments disparaging Mexican immigrants and referring to the flood of migrants trying to enter through the US southern border as an “invasion.”

In recent weeks, critics also accused Trump of racism after his attacks on members of Congress who belong to racial or ethnic minorities. Trump has denied he is a racist or that he encourages white supremacists.

Mayor Pete Buttigieg of South Bend, Indiana, told Fox News Sunday: “There’s no question that white nationalism is condoned at the highest levels of our government.”

“He’s given license for this toxic brew of white supremacy to fester more and more in this country, and we’re seeing the results of that,” Julian Castro, the former mayor of San Antonio, said on ABC.

US Senator Elizabeth Warren said in a tweet “we need to call out the president himself for advancing racism and white supremacy.”

Ivanka Trump, the president’s daughter and White House adviser, said on Twitter that “White supremacy, like all other forms of terrorism, is an evil that must be destroyed.”

While authorities were still investigating the motive of the El Paso shooter, Texas Governor Greg Abbott said the rampage appeared to be a hate crime. Police cited a manifesto they attributed to the suspect, Patrick Crusius, a 21-year-old white man, as evidence the bloodshed was racially motivated.

The statement called the Walmart attack “a response to the Hispanic invasion of Texas.” The manifesto also expressed support for the gunman who killed 51 people at two mosques in Christchurch, New Zealand, in March.

The shooting renewed attention to domestic terrorism. FBI Director Christopher Wray told a Senate hearing in July the majority of the domestic terrorism the FBI has investigated were “motivated by some version of what you might call white supremacist violence.”

Former Vice-President Joe Biden, the Democratic frontrunner in opinion polls more than a year before the presidential election, said on Twitter: “We can’t fix a problem if we refuse to name it: white nationalism. An ideology emboldened by a president who stokes the flames of hatred and coddles white supremacists with messages of support.”

The carnage ranked as the eighth-deadliest mass shooting in modern US history, after a 1984 shooting in San Ysidro, California, in which 21 people died.

Despite several high-profile mass shootings in recent years, gun control has proven to be an intractable debate within the US Congress.

Trump, in response to a question about what could be done about the gun problem, told reporters he was “talking to a lot of people” and more needed to be done but gave no specifics.

Republicans and some moderate Democrats have resisted placing additional restrictions on gun ownership, and efforts to improve mental health services or establish new ways to identify potential shooters before they act have not gained traction.

Democratic leaders in Congress responded to the pair of shootings with a call for action, urging Republican Majority Leader Mitch McConnell to hold an emergency session to debate gun control legislation. McConnell’s office did not immediately respond to a request for comment.