The Democratic presidential nominee would become the next president by winning Pennsylvania, or by winning two out of the trio of Georgia, Nevada and Arizona. 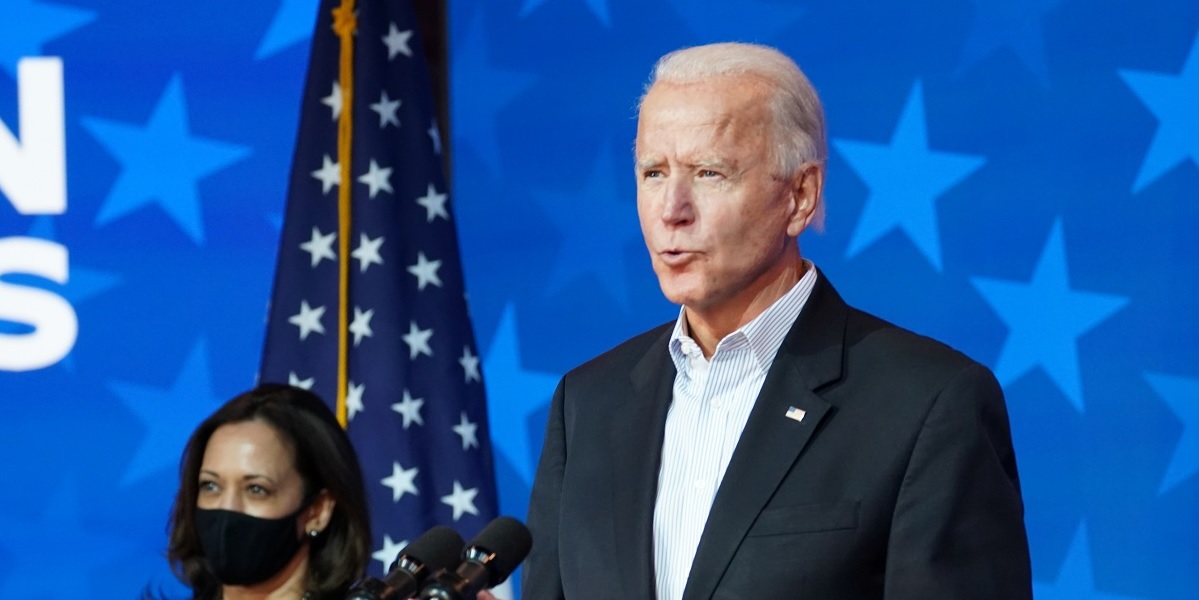 Washington: Democratic presidential candidate Joe Biden took a narrow lead over President Donald Trump in the battleground state of Georgia for the first time early on Friday, putting the White House within his reach as it and other undecided states continue to count ballots.

Biden has a 253 to 214 lead in the state-by-state Electoral College vote that determines the winner, according to most major television networks. Winning Georgia’s 16 electoral votes would put the former vice president on the cusp of the 270 he needs to secure the presidency.

Biden, 77, would become the next president by winning Pennsylvania, or by winning two out of the trio of Georgia, Nevada and Arizona. Trump’s likeliest path appears narrower – he needs to hang onto both Pennsylvania and Georgia and also to overtake Biden in either Nevada or Arizona.

Biden is now ahead by 917 votes in Georgia, where counting continued early on Friday.

The shift in Georgia came hours after Trump appeared at the White House to falsely claim the election was being “stolen” from him.

Trump had seen his lead steadily shrink in Georgia, a Southern state that has not voted for a Democratic presidential nominee since 1992, as officials worked through tens of thousands of uncounted votes, many from Democratic strongholds such as Atlanta.

The Georgia secretary of state reported late on Thursday there were about 14,000 ballots still to count in the state.

The state also will have to sift through votes from military personnel and overseas residents as well as provisional ballots cast on Election Day by voters who had problems with their registration or identification.

Biden has been steadily chipping away at the Republican incumbent’s lead in Pennsylvania as well. His deficit had shrunk to just more than 18,000 there by early on Friday, and was expected to continue falling with many of the ballots still to be counted being cast in Democratic areas.

Biden also maintained slim advantages in Arizona and Nevada. In Arizona, his lead narrowed to about 47,000 early on Friday and in Nevada he was ahead by about 11,500 votes.

As the country held its breath for a result in the White House race, Georgia and Pennsylvania officials expressed optimism they would finish counting on Friday, while Arizona and Nevada were still expected to take days to complete their vote totals. 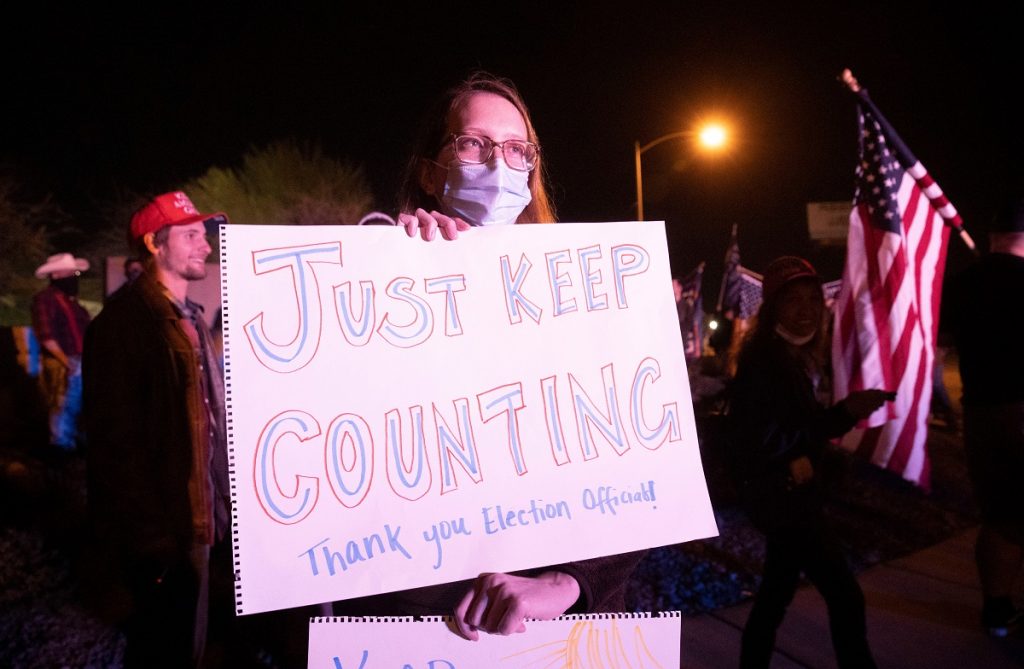 Trump, 74, has sought to portray as fraudulent the slow counting of mail-in ballots, which surged in popularity due to fears of exposure to the coronavirus through in-person voting. As counts from those ballots have been tallied, they have eroded the initial strong leads the president had in states like Georgia and Pennsylvania.

States have historically taken time after Election Day to tally all votes.

Trump fired off several tweets in the early morning hours on Friday, reiterating the complaints he aired earlier at the White House. “I easily WIN the Presidency of the United States with LEGAL VOTES CAST,” he said on Twitter, without offering any evidence that any illegal votes have been cast.

Twitter flagged the post as possibly misleading, something it has done to numerous posts by Trump since Election Day.

In an extraordinary assault on the democratic process, Trump appeared in the White House briefing room on Thursday evening and baselessly alleged the election was being “stolen” from him.

Offering no evidence, Trump lambasted election workers and sharply criticized polling before the election that he said was designed to suppress the vote because it favoured Biden. 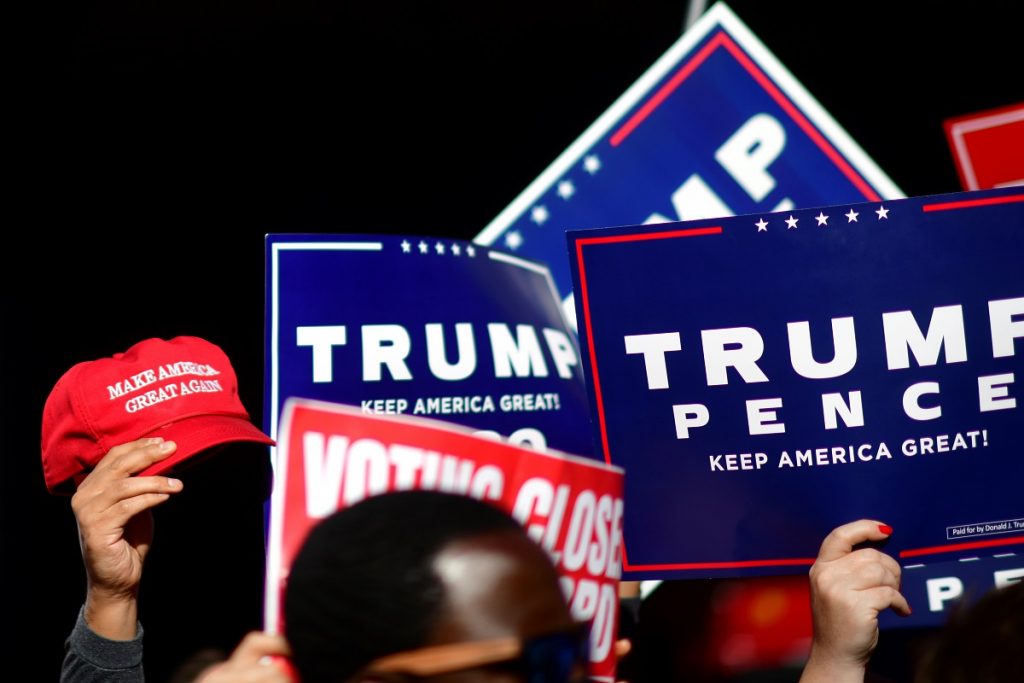 A person holds a Make America Great Again (MAGA) hat as supporters of US president Donald Trump demonstrate outside of the Philadelphia Convention Center, where votes are still being counted two days after the 2020 US presidential election, in Philadelphia, Pennsylvania, US November 5, 2020. Photo: REUTERS/Mark Makela

“They’re trying to rig an election, and we can’t let that happen,” said Trump, who spoke for about 15 minutes in the White House briefing room before leaving without taking questions. Several TV networks cut away during his remarks, with anchors saying they needed to correct his statements.

Biden, who earlier in the day urged patience as votes were counted, responded on Twitter: “No one is going to take our democracy away from us. Not now, not ever.”

Trump’s incendiary remarks followed a series of Twitter posts from Trump earlier in the day that called for vote counting to stop, even though he currently trails Biden in enough states to hand the Democrat the presidency.

Trump’s campaign, meanwhile, pursued a flurry of lawsuits in several states, though judges in Georgia and Michigan quickly rejected challenges there. Legal experts said the cases had little chance of affecting the electoral outcome, and Biden campaign senior legal adviser Bob Bauer call them part of a “broader misinformation campaign.”

The close election underscored the nation’s deep political divides, while the slow count of millions of mail-in ballots served as a reminder of the deadly coronavirus that continues to upend American life.

Biden, if he prevails, will nevertheless have failed to deliver the sweeping repudiation to Trump that Democrats had hoped for, reflecting the deep support the president enjoys despite his tumultuous four years in office. Trump’s influence on the Republican Party will remain strong, even if he ultimately loses a tight election.

The winner will face a pandemic that has killed more than 234,000 Americans and left millions more out of work, even as the country still grapples with the aftermath of months of unrest over race relations and police brutality.